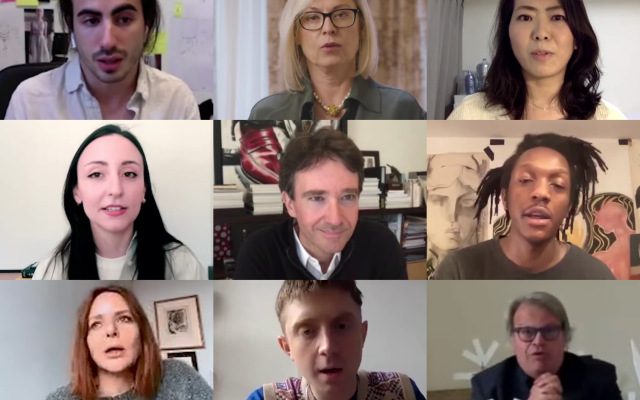 LONDON/PARIS — LVMH Moët Hennessy Louis Vuitton on Wednesday said it has extended its Maison/0 partnership with Central Saint Martins for another five years with scholarships, awards and a new Master of Arts in regenerative design.

“I believe [Central Saint Martins] students have what it takes to break new grounds and reinvent our industry in a way that positively impacts biodiversity preservation and the climate,” said Chantal Gaemperle, director of human resources and synergies for LVMH, in an emailed response to questions from WWD.

“CSM is at the cutting-edge of sustainability practices, not only in fashion, but also in design as a whole,” she said, noting that the school was the first to offer a master of arts in biodesign. The executive noted that LVMH is working with the school on issues including zero waste collections, upcycling and recycling.

Creative thinking and mutual inspiration are at the heart of the partnership, she said.

“As a leader in luxury, our duty is to be at the forefront of sustainability, but we do it with humility by listening, observing and accepting to be challenged by this new generation of creatives,” she added.

In an online event with students from Central Saint Martins, Antoine Arnault, LVMH director of image and communications, similarly emphasized that point when asked how the group aims to develop more sustainable practices.

All of the Fashion at the 2021 BAFTA Awards

“By listening, probably by being open-minded, I think by not thinking we own the truth and that it’s not a sin to change your mind or to make a mistake, by working in collaboration with experts in their field, which in some cases we are not, but working with scientists, by working sometimes with competitors,” said Arnault.

Citing the company’s climate week brainstorming session, important ideas came from employees on the shop floor or in factories, he noted.

“Strategic ideas came from that crowd sourcing, from people in stores, people in factories, people that worked together for a few days and came up with these sustainable, very concrete and… efficient ideas on sustainability,” he said.

Gaemperle detailed the elements of the partnership, which is aimed at tackling the climate and biodiversity emergency, with design research, a challenge fund for projects to address climate and diversity issues, and in the ‘nature-positive’ realm, a new prize called “This Earth Awards,” aimed at rewarding artistic work that promotes nature. Projects from the program’s Green Trail Awards in 2019 were featured in the London Design Week exhibit “Designing in Turbulent Times.”

“It showed that when creative minds come together, we can address climate change and issues of biodiversity like no other people,” said Jeremy Till, head of college at Central Saint Martins.

Howe, a MA Fashion men’s wear pathway graduate, said the scholarship “enabled the level of education accessible to people like him,” while Korsi from the BA Fashion women’s wear design pathway added that the funding allowed him to fully develop his 3D-printing technique by creating more samples.

Fashion designer Stella McCartney then spoke with Daniela Benaim, 2019 LVMH scholar from MA fashion communication, about how designers can be more sustainable and regenerative, and what sort of challenges they will be facing by going green.

“At Stella McCartney, over 60 percent of the positive impact that we have here comes from the sourcing. The first thing that anyone can do, whether you are a student or an established house, is really to look at who your suppliers are,” she said, adding that designers should ask them lots of questions, and make sure that they are the best people they can work with.

“We are a very linear industry. To make things more circular, it’s great to make things more regenerative, take the material that you source and weave them in a way that’s more mindful and really look at how you deal with your waste and be mindful of how you pattern cut,” she added.

McCartney also said she is in love with the geeky side of fashion, such as the development of lab-grown spider silk and mycelium leathers, as it is ” the most modern thing” in fashion.

Being a sustainable brand also comes with many restraints.

The design process is always changing, and everything is up for question, but at the same time, despite fewer choices and the higher cost of organic materials, brands can still “do great things,” she said.

After all these years, McCartney said she is happy to see that everyone is finally feeling comfortable having this conversation around sustainability.

“I was always kind of the freak, the eco weirdo in the room, and ridiculed and made fun of the way in which I approach the industry. It has really shifted, and that’s a huge positive. I feel less ridiculous trying to open up an alternative method of working in the fashion industry. It’s the opposite now, it’s a huge value to the brand. That’s a big way forward, and hopefully, it stays in fashion,” she said.

She encouraged the new generation to “think outside the box, don’t take no for answer, and keep fighting” for a better future.

Calling McCartney a “pioneer in the industry,” Gaemperle noted that the designer is not only a graduate from the school but also a “woman of convictions, a role model in sustainable fashion for many years.” The designer, whose label is part of LVMH, is working with the group on several regenerative agriculture projects, including one on cotton in Turkey and another on wool in Australia.

Lauding projects like Loewe’s woven handbag made from upcycled leather — a design that allows for surplus leather to be made into a unique bag style — Gaemperle emphasized the repair aspect of the notion of regeneration.

“But our definition of regenerative design goes even further: not only do we want to avoid using more natural resources, we also want our products to have a positive impact on ecosystems,” she said, citing the example of a project entailing the use of waste from invasive crayfish to craft ceramic-like materials that resemble marble.

Other projects featured in the online symposium included lipstick and packaging made from algae, concrete made with ash from Japanese Knotweed and tiles made from olive pulp after oil has been extracted.

Brands including Louis Vuitton, Loewe, Guerlain, Bulgari and Patou presented projects with a sustainable bent, with examples like using local materials for store designs, building displays with fiberglass alternative Dacron or turning set displays into cages for oyster farms, while perfumer Jacques Cavallier talked about the science of scents. Teams at Louis Vuitton, who have used solar panels and enormous dream catchers made from leather off-cuts in store windows, are still puzzling over the question of how to grow mushrooms in a future display.

“Together with this new generation of designers, we join forces to be the change we want to see in this world,” said Gaemperle.

Sustainability Has a Long History at LVMH