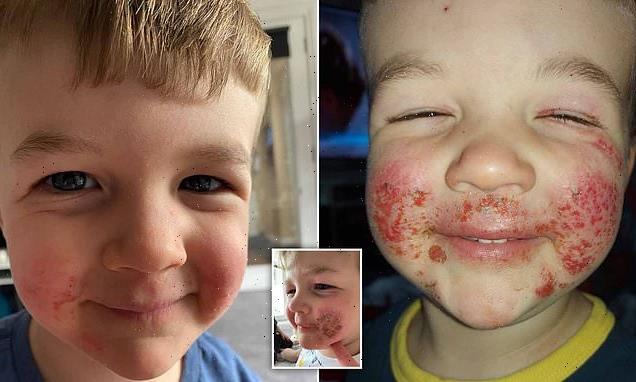 Mother of boy, 3, with painful facial blisters caused by eczema reveals how his skin cleared within days of using a £10.95 over-the-counter cream after months of trying to find a solution

The mother of a boy who had open wounds on his cheeks as a result of painful eczema has revealed how his complexion cleared within days of using a £10.5 over-the-counter cream.

Three-year-old Arlyn Smith, from North Ayrshire, was diagnosed with atopic eczema, which causes itchy, cracked and sore skin, and perioral dermatitis – a rash that tends to occur around the mouth – in August 2020, after recovering from a severe case of chicken pox which landed him in hospital.

Although he was not in constant pain, Arlyn’s condition was distressing for parents Lynsey, 32, and Robert, 31, and drew stares from strangers.

She and husband Robert, 31, a customer service advisor, spent months trying products to ease their son’s suffering, including steroids, until learning of Lyonsleaf Natural Zinc and Calendula Cream. 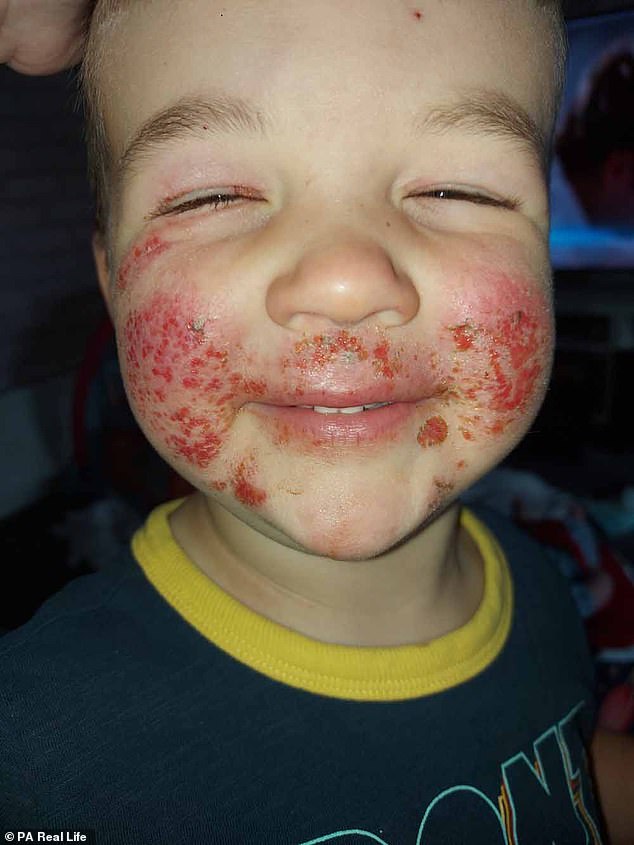 Arylin Smith is pictured before the eczema was treated. Lynsey says the red eczema bothered her and Robert more than it did Arlyn 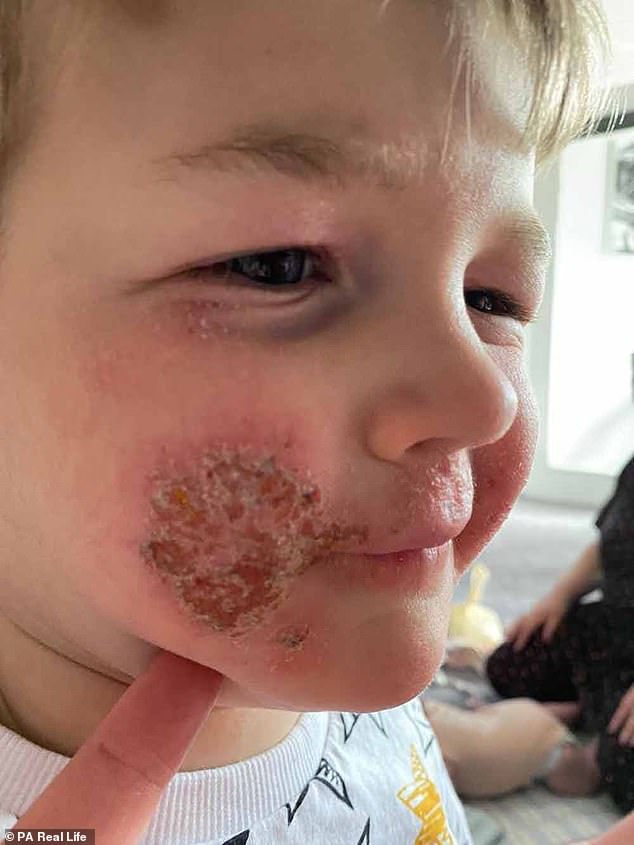 Lynsey and Robert fear that Arlyn may end up with scarring due to the open wounds that were on his face for months. Arlyn before using the cream 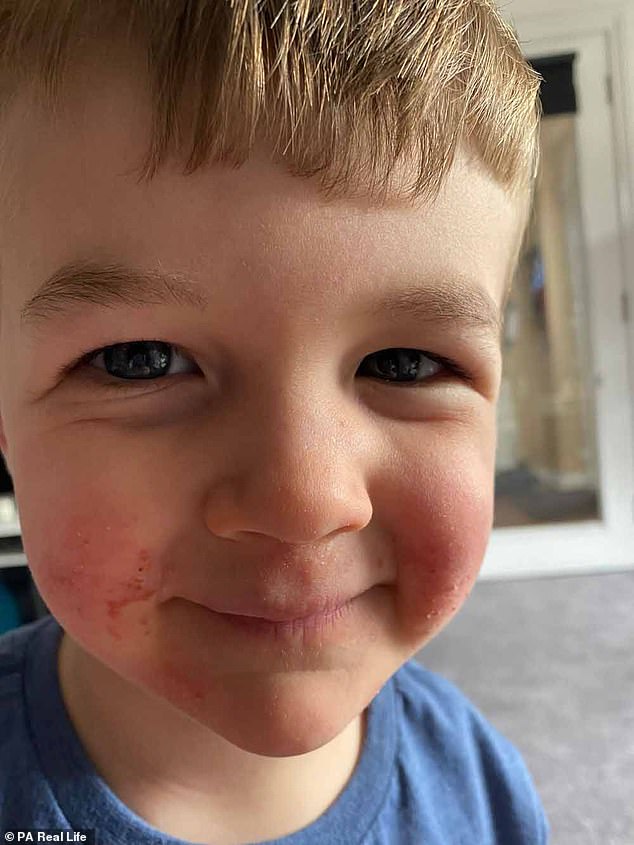 Thanks to the zinc cream, Arlyn’s face has started to heal. The cream worked almost instantly on his skin and was almost gone within a few days

‘It worked pretty much instantaneously. Within a couple of days, we noticed a huge improvement,’ Lynsey, 32, said.

‘While the zinc cream improved his skin, it was also drying it out after a while, though, so we used that at night and in the day we used moisturising creams.

‘Now his cheeks are still a little red, but they’re nothing like they used to be.

‘Sadly, we think Arlyn might end up with some scarring, because he just had open wounds on his face for months. It was disgusting, but we’re hoping now that he is on the mend.’

Arlyn’s chicken pox – which his parents believe was the source of his skin problems – were so bad that he was hospitalised because they became infected.

‘His skin never recovered from chicken pox,’ Lynsey said. ‘He actually ended up in hospital because they were infected. 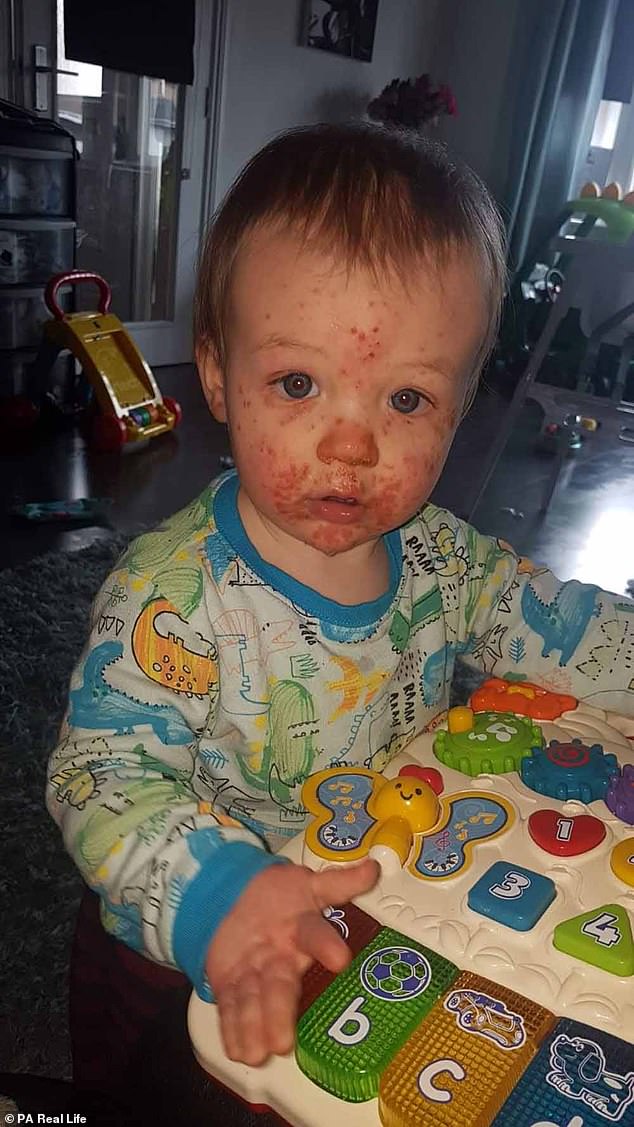 Arlyn pictured when he was 15 months old. His chicken pox was so severe that he was hospitalised 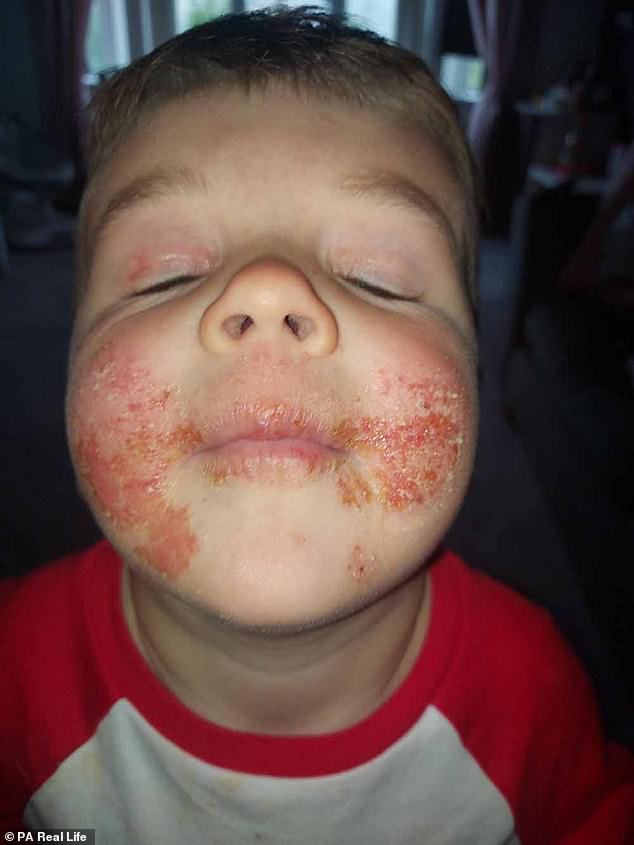 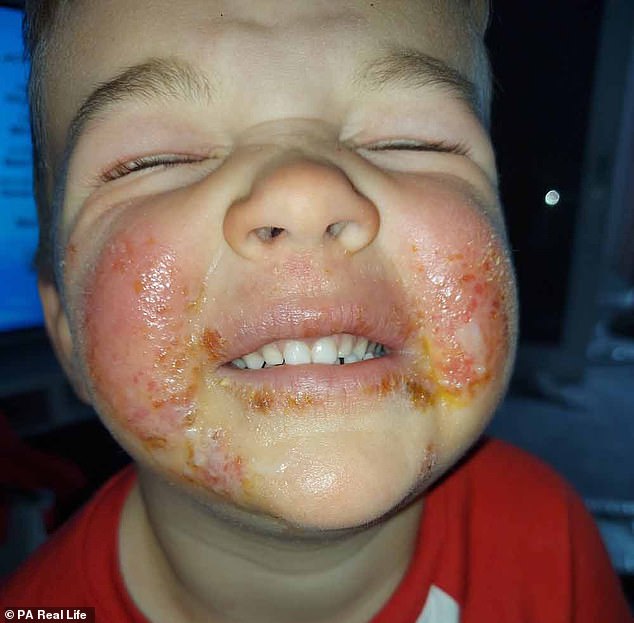 Eczema is a condition that causes the skin to become itchy, red, dry and cracked.

Atopic eczema is more common in children, often developing before their first birthday. However, it may also develop for the first time in adults.

Eczema causes the skin to become itchy, dry, cracked, sore and red. Some people only have small patches of dry skin, but others may experience widespread red, inflamed skin all over the body.

‘He was on maybe four rounds of oral antibiotics from then on, because the infection just kept spreading.

‘After he recovered from chicken pox, his skin flared up and he was put on different courses of antibiotics, which calmed it down.

‘But in August last year, he broke out in eczema almost overnight.

‘At first, we thought it was down to his back teeth coming though and the fact he was putting his hands in his mouth and touching his skin a lot, but it was clearly more than that.’

Prescribed several different remedies, including steroid creams, Arlyn’s parents worried about using such strong medication on his skin at such a young age.

Lynsey said: ‘We went back and forth to the doctor, but the skin on his face just seemed to get worse and worse, to the point where he had oozing red sores all over his cheeks.’

In August 2020, Arlyn was diagnosed with atopic eczema, which became infected.

Facing a six month wait to see a dermatologist, Arlyn’s parents were worried sick for their boy.

‘We’d have weeks where his skin would calm down, then it would go back to being awful again.’ Lynsey said. 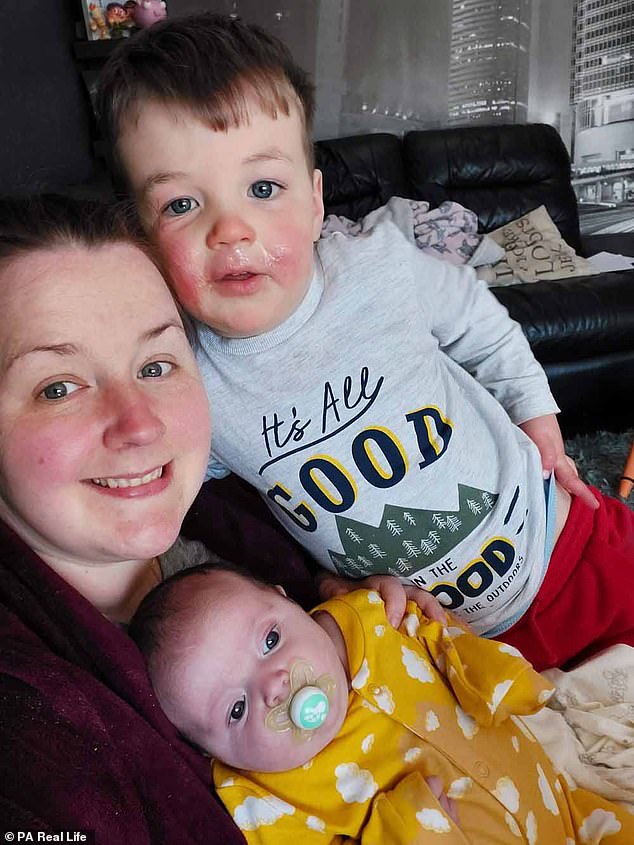 It was only at the recommendation from Robert’s colleague that the family found a miracle cure for Arlyn’s eczema. Pictured, Arylin with his mother and sister, Cleo 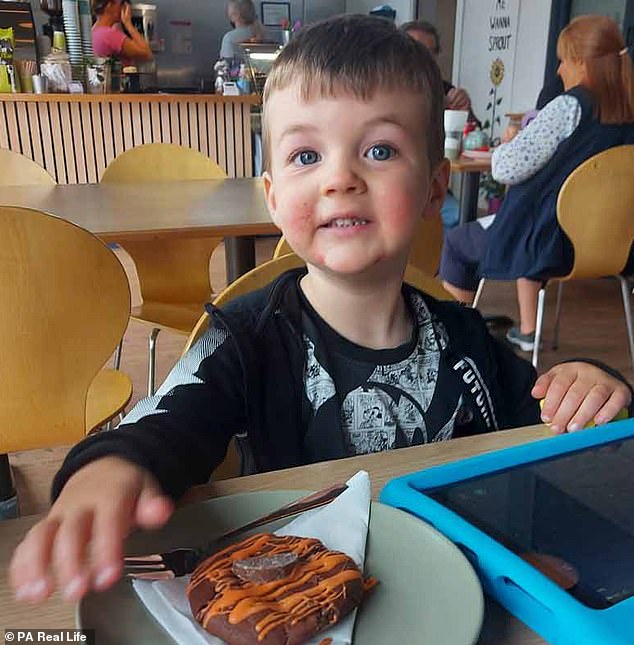 Arylyn out on a family trip. Lynsey says people would stare at Arlyn’s sore face in the supermarket and in public

‘I ended up refusing to give him antibiotics because they weren’t working. His face wasn’t getting any better and he was just building up a resistance to the drugs.’ 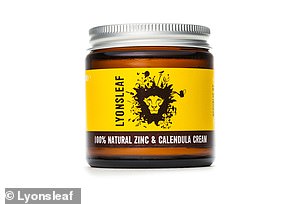 The Lyonsleaf cream cleared up Arlyn’s eczema almost instantaneously, it costs only £10.95 and is free of steroids

By the time his doctor’s appointment came through in June, Covid meant everything was online.

‘By then, we were trying different antifungal creams, antibiotics, antibiotic creams and nothing was working,’ said Lynsey.

‘It didn’t help that he would scratch his face in his sleep. He even had eczema on his eyelids. It was horrible.’

The family were recommended Lyonsleaf by one of Robert’s colleagues.

‘We figured they were worth a try.’ Lynsey said. ‘We weren’t sure which products would suit him best, so we tried some sample pots first.’

‘By this stage, his skin was so bad that if I took him to the supermarket, people would stare at him. 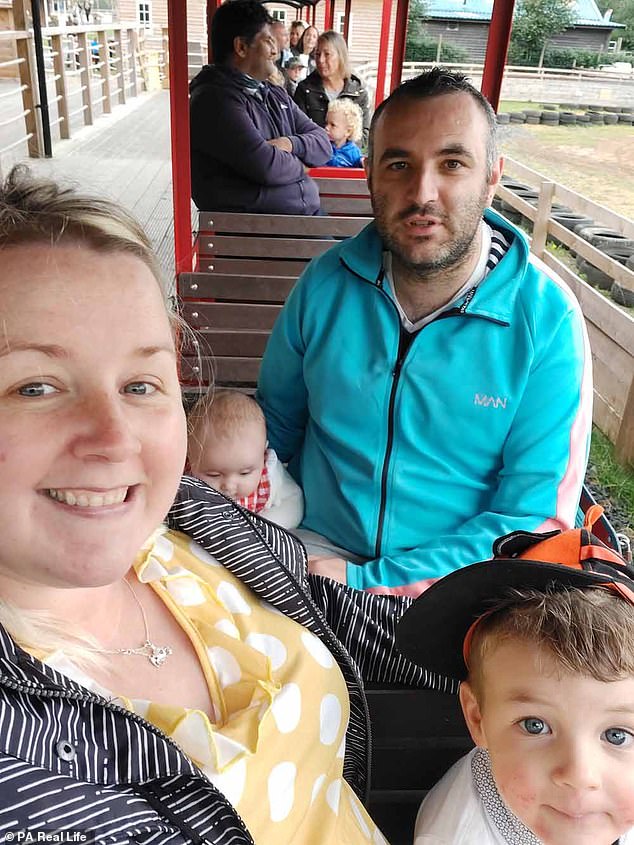 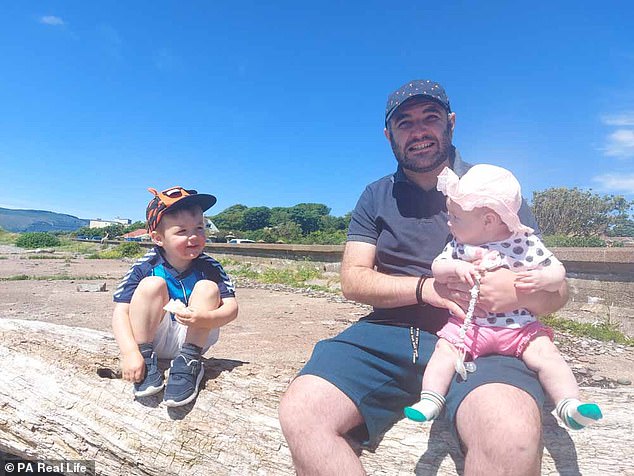 Arlyn was prescribed antibiotics for his face but the treatment did not work. Pictured here with his father and sister 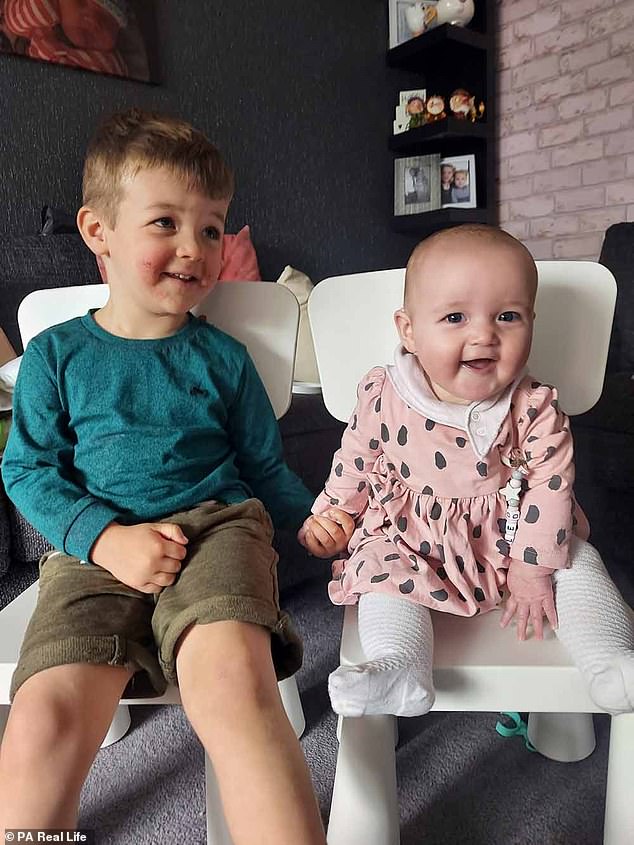 Arlyn, three, pictured here with his younger sister, Cleo, seven months. His mother is glad not to have had to use steriod creams on his skin

‘Once, someone dropped off a parcel and asked me what was wrong with his face. It’s so awful and rude. I’m glad he’s young because if he was older, it could have really affected his confidence. And it broke my heart to see his little face so red and sore.’

Lynsey and Robert said they noticed a difference within days of using the new product.

She said: ‘It is amazing to have found something that doesn’t mean slapping steroids on his skin.’

‘I think there were times when our son’s skin bothered us more than it did him, as we felt so helpless.’

‘Now we are just so grateful that we found the right cream and I’m very hopeful that he’s on the mend.’