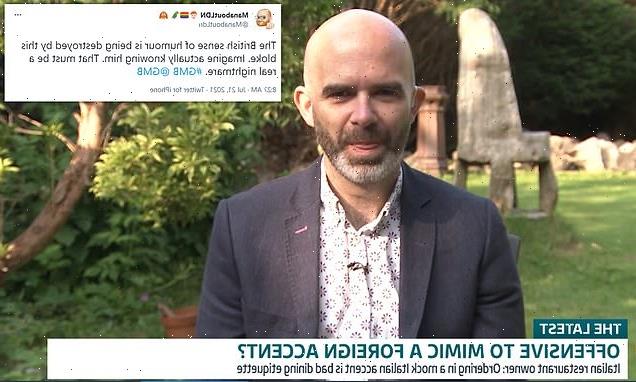 ‘This bloke is destroying British humour’: GMB viewers mock linguist who claims mimicking a foreign accent is as offensive as using blackface

Good Morning Britain viewers were up in arms this morning after a linguist likened mimicking a foreign accent to using blackface.

The debate was sparked after an Italian restaurant owner took to social media to shame diners who mocked his accent.

But Dr Drummond’s views were opposed by actress Harriet Thorpe, known for her roles in The Brittas Empire and Absolutely Fabulous, and many viewers at home, with one claiming he was ‘destroying the British sense of humour’. 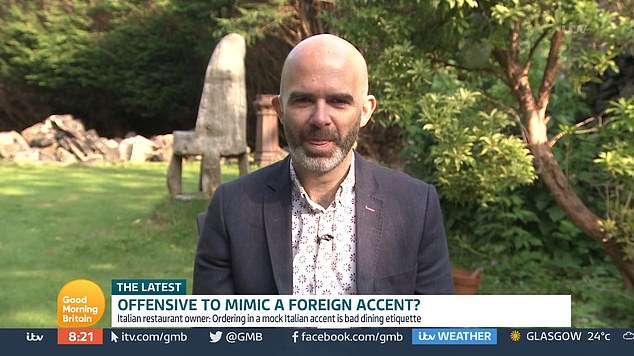 Many viewers at home criticised Dr Drummond’s view, with one claiming he was ‘destroying the British sense of humour’

Another tweeted: ‘Folk need to toughen up and stop being offended by everything!’

And one raged: ‘Is there anything people aren’t offended by anymore? Now accents, FFS.’

Following an iconic clip from Fawlty Towers featuring an amusing exchange between Sachs and John Cleese, who played hotel owner Basil Fawlty, Dr Drummond told hosts Ben Sheppard and Kate Garraway: ‘There’s two things going on here, there’s using accents in a particular story or a joke for comedic effect, and then there’s mimicking someone’s accent to their face or behind their back. I think both are problematic but for perhaps different reasons.

‘If you’re using a particular accent in a story or a sitcom, you’ve got to ask yourself why this accent, why am I using this particular voice, and the chances are it’s because of some kind of lazy stereotype, and all you’re doing by using that is reinforcing this stereotype.

‘These kind of stereotypes are almost always negative and they’re often pretty damaging, because somebody’s voice is so connected to who they are, it’s very connected to their social class, their ethnicity, their gender, even their sexuality, so when you’re using it in a mocking, stereotypical way, it’s really not a million miles away from using sexist, racist, or homophobic language. 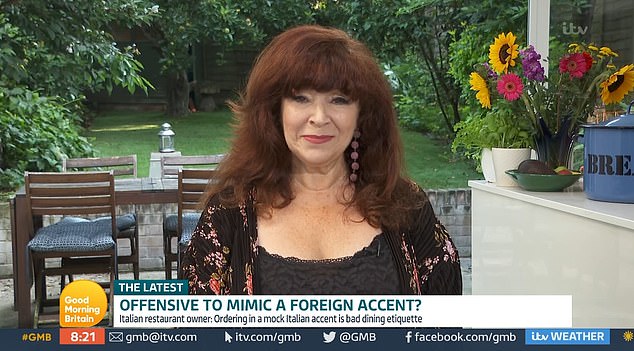 Dr Drummond’s views were opposed by actress Harriet Thorpe, known for her roles in The Brittas Empire and Absolutely Fabulous

‘And then the other one, if you’re mimicking someone’s accent to their face, again you’ve got to think, well why, what am I trying to do here? Because it’s almost never done in a positive way, it’s never done making someone out to be more sophisticated for example, there’s always a sense that you’re making a comment about their social class, about their education, their ethnicity, in a more negative way, so that’s why I think it’s a pretty damaging thing.’

Harriet hit back, arguing that many actors use accents to create ‘amazing characters’, referencing Idris Elba and Jodie Comer in Killing Eve, who does ‘a hundred different accents’.

‘If we’re saying no actor can do an accent because it’s mimicking or taking the mickey, then that’s not so,’ she said.

‘No, we shouldn’t be racist, homophobic, anti-Semitic, anti-Muslim and mimic and mock people, absolutely not, but when you’re expressing something, and not only in Fawlty Towers – he’s taking the p*** out of himself as this terrible owner of this horrific hotel. He also speaks in a certain way that we laugh it. It isn’t taking the mickey out of somebody, it’s creating a story, and that’s what we do.’ 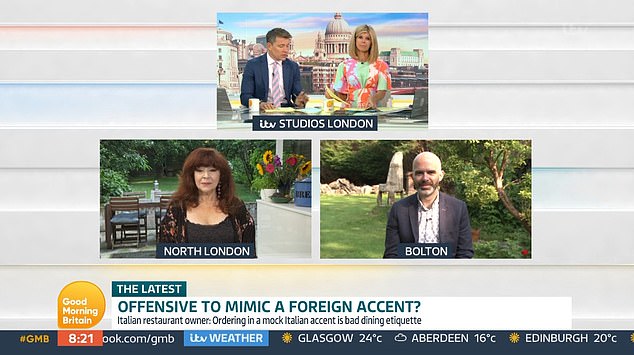 Harriet hit back, arguing that many actors use accents to create ‘amazing characters’, referencing Idris Elba and Jodie Comer in Killing Eve, who does ‘a hundred different accents’

Dr Drummond insisted he was not arguing that actors shouldn’t be using different accents, pointing out that his view is more to do with mimicking and putting on accents ‘for a certain effect’.

‘Having said that, there is an issue within TV and radio drama about the accents they choose to use,’ he went on.

‘I’m not talking about the actors, but the producers and the writers; if a character is being written with a particular accent, again you’ve got to think, well why, why are they choosing this accent?

‘Because again it often comes down to a stereotype. This isn’t as bad as it used to be, but in the past it was, if you think about old TV programmes like Wiedersehen Pet, and they used to have different characters with different accents, and those accents matched the stereotype of a character.

‘Even radio dramas like The Archers relies on particular stereotypes of accents n order to portray a particular character. And it’s not always bad, but often it is, often it’s just feeding into a lazy stereotype.’

Viewers at home were largely on Harriet’s side during the discussion, with some questioning how the debate even made it onto GMB.

Others revealed they often encounter people who mock their accents, but they don’t take it to heart.

One tweeted: ‘I worked in a multi-cultural industry, hospitality. And being from eats London, I got the mickey taken out of me for my accent by Italians and Spanish colleagues, it was all done as a joke and no one took offence to it. These people need to get a life!’

Another commented: ‘Everyone takes the p*** out of British accents whether Upper Class Posh or Cockney or any Regional.’

And one joked: ‘Gino D’Acampo must really offend this dude.’

Viewers at home were largely on Harriet’s side during the discussion, with some questioning how the debate even made it onto GMB

But some felt the debate was worthy, with one tweeting: ‘Mimicking accents can be embarrassing and harmful. It stops people speaking up in debates and everyday life. It’s a real issue!’

Another suggested: ‘Fawlty Towers was the 70s where being offensive to people from overseas was part of the brief but in this day and age in a multicultural society with actors from all backgrounds, there is no need for mimicking accents from overseas anymore.’

And one wrote: ‘Discussing #accents on #GMB today. The number of times I’ve been asked where I’m from (once when on holiday). When I reply “#Birmingham (born and bred) I often get a put down in a really bad #BlackCountry accent. We don’t all sound like #LennyHenry, he’s from #Dudley anyway.’

Dr Drummond may have a point; last month researchers in the University of Essex found that working class accents are judged as less intelligent, friendly or trustworthy by playing nearly 200 young people from the south east 10 second clips of others from the region.

Accents including those from Berkshire, Buckinghamshire, Hertfordshire, Surrey, parts of London and Essex were played, all saying the same sentence.

One clip featured Dr Amanda Cole, a postdoctoral research fellow at the university’s Department of Language and Linguistics.

Despite her credentials and being the person behind the whole project, most of those who listened to her speak felt she was less intelligent than the other voices they heard.

Working class accents were also judged to be less intelligent, friendly and trustworthy than middle class people, and people from ethnic minorities were judged less intelligent than white people based on their accent, according to the study.