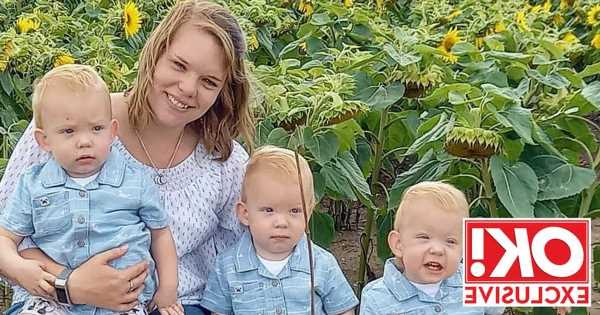 With triplets equating to around 0.03% of live births in the UK each year, Megan Smyth got more than she bargained for when she decided to try for a baby.

What’s more, with the probability of conceiving identical triplets believed to be one in 200 million, the 33 year old first-time mum most definitely had the shock of a lifetime. Here, Megan, from Derbyshire, tells her story…

“As the sonographer announced she could see two babies, I wasn’t surprised. Twins run in my family and I’d always wanted a set of my own. When I got pregnant only six weeks after coming off the Pill, I joked with my partner, Clayton Whittaker, 43, about there being two, three or even four babies in there.

But I wasn’t laughing when the sonographer said, “There’s a third heartbeat.” I burst into tears. I’d wanted more than one baby, but how would I cope with three at once?

We were told that our triplet boys were identical and were sharing a placenta but had different sacs. “It is one of the riskiest pregnancies you can have in terms of health to both the mother and the babies,” explained the doctor.

It was suggested we reduce the number of babies to help carry to full term but that was never an option for us. Their heartbeats were so strong – we felt it was a case of all or nothing.

My bump grew quickly and by 24 weeks I couldn’t eat a thing because the babies were taking up so much room. I forced down Bakewell tarts and milkshakes to get as many calories into me as possible. I was scanned every two weeks and it was on the morning of my 33-week scan in March 2021 that I felt a twinge in my back. By the time I got to hospital I was already 5cm dilated so I was taken for an emergency C-section.

All three boys were a good weight [for triplets] – Rico 4lb 1oz, Odyn 3lbs 12oz and Colby 3lbs 7oz – but had to stay on the neonatal ward due to their premature arrival. Once I’d given birth, I went into shock. I’d gone from being pregnant at home that morning to being a mum-of-three by bedtime.

Even though I’d joined Facebook groups for triplet mums to try to prepare, I didn’t feel ready. It took me a few weeks to bond with them, not because I didn’t love them – it was just the speed of it all. Bringing them home after only 17 days was very scary.

Luckily, Clayton is a self-employed excavator operator so could take time off to help and our mums pitched in too. The neonatal nurses had got us into a good routine of changing their nappies and feeding them every four hours. I started off expressing milk but had to switch to formula to meet their demands. We kept the little spoons that came with each box to see how many we were using and Clayton worked out that we’d spent more than £1,200 on formula in the first six months.

I learned to feed the two hungriest babies first but occasionally I had to do three simultaneously, using a foot to hold one of the bottles up.

I recorded everything in a notebook – from timings to the types of nappies they’d had. It was the only way to keep track, especially when you are tired.

Because they’re identical, we struggled to tell each one apart at first so we painted their nails. Colby was orange, Odyn was blue and Rico was green. It helped us recognise which was which, particularly after Clayton bathed the same baby twice. I often dress them in those colours now. I like putting them in identical outfits but it makes it harder to keep track of them if we go to the park.

One of the most difficult things about having triplets is not being able to get out on my own with them often. I’m scared they will walk off in different directions. And there have been times when my triple buggy has got stuck in shop doorways. Luckily people will rush to help and now I just shimmy it through sideways instead.

When I see twin mums, I wonder what they are complaining about though – they have two babies and two hands. And, of course, triplets are costly. We had to move house and buy a bigger car that has room for three car seats. Our buggy is a specialist triplet pram imported from America.

I went back to work part-time as a project co-ordinator when they were 10 months old. We pay £1,200 per month for childcare – which is most of my salary – but it means I can have a little bit of time when I’m not simply looking after babies.

There are occasions when it can get overwhelming, like if the three of them are screaming at the same time. I try to take a breath and remind myself that most people find it hard work with one child.

The boys are starting to talk now and their characters are shining through. They might look identical but they have their own distinct personalities. We nicknamed Odyn ’The Fart’ because he’s silent but deadly! He’s a thinker and analyses everything. Colby – who is the oldest – is Little Chimp because he’s cheeky and always climbing things, while Rico is the cuddly, giggly one.

The best part of being a parent of triplets is watching their relationship grow. They’re often giggling together and if one cries, the others will comfort them.

Now they are toddlers, they are prone to getting up to mischief, like smearing themselves in Sudocrem, which is a nightmare to get off one child, let alone three. They are little celebrities locally and I’m always getting stopped. I’ve even bought a T-shirt saying “Yes they are triplets, yes they are identical and yes I can tell them apart.”

I don’t mind when people ask questions, as long as they’re not too negative. A few say, “I couldn’t cope with that!” and I think, “That’s not very nice – I don’t know any different.” Besides, the pleasures outweigh any difficulties. It’s three times the work but also three times the love.”