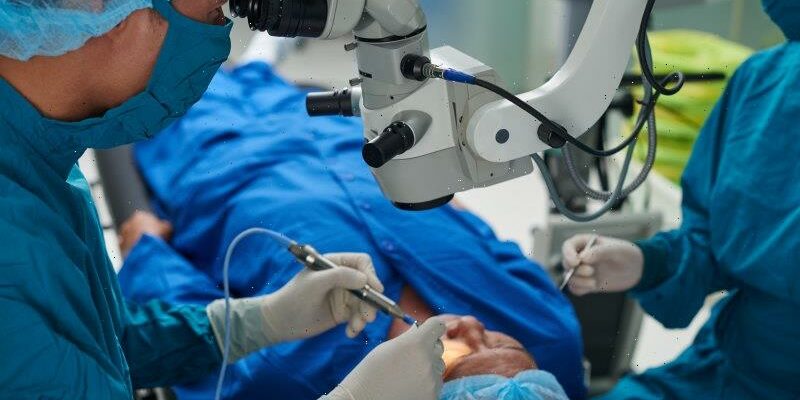 New research published in the Medical Journal of Australia today shows that the incidence of falls among over-65s referred for cataract surgery was 31 per cent lower after receiving surgery in their first eye, with a further 50 per cent lower incidence once both eyes were fixed. 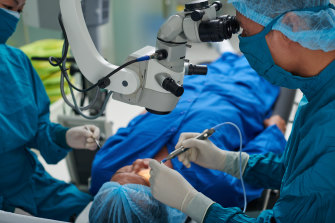 Older people who received cataract surgery were less likely to experience a fall or injury.Credit:iStock

“We always knew cataracts were a risk factor for falls, but what this study has shown is if you’ve got both eyes operated on, there’s a really good benefit,” said lead author Professor Lisa Keay, head of UNSW’s school of optometry and vision science.

The study looked at data from people referred for cataract surgery at eight Australian public hospitals, including Westmead and Royal North Shore in Sydney and Melbourne’s Royal Victorian Eye and Ear Hospital, between 2013 and 2016.

Keay said the research showed the impact of surgery for people who may not have been able to afford to go private to be treated more quickly, instead facing a waitlist for each of their eye operations.

After elective surgery was shut down several times across the country during the pandemic, already lengthy wait times for cataract surgery at public hospitals rose significantly.

In NSW, there were more than 2500 people waiting longer than the clinically recommended one year for cataract surgery by the end of March – the highest figure on record – data from the Bureau of Health Information showed. The overall waitlist for the procedure was more than 20,000.

However, Keay said it was “hard to put a number” on the extent of the backlog because of delays to see specialists and because people may have put off seeing their regular health professionals during lockdowns.

“The delay has a real impact, even beyond falls and injuries. If someone’s vision is not good, they are not driving as well, which is a risk. And then some other people give up driving and lose their independence,” she said.

Associate Professor Ashish Agar, president of the Australian Society of Ophthalmologists, said the research was “putting data to what we have known for a long time”.

“It’s low-hanging fruit; it’s a procedure that takes 30 minutes that makes such a difference to a patient’s life,” he said, noting US research had shown cataract surgery had a positive impact on mortality.

With coronavirus cases again filling Australian hospitals, Agar said the study served as a reminder of the “unintended consequences” of using elective surgery restrictions to ease the load.

“It is a difficult issue because at hospitals we are so short of staff and you do have this real need to ration resources, but this shows there is a cost to the community.”

Modelling published by the Sax Institute last year, also led by Keay, found cutting the waitlist for cataract surgery to three months would result in more than 50,000 fewer falls over a three-year period and save health systems about $6.6 million, including the cost of bringing the surgeries forward.

Although no state has formally moved to restrict elective procedures, the BA.4 and BA.5 wave driving rising coronavirus hospitalisations across Australia is affecting how much non-urgent surgery can be completed.

Major hospital groups in Melbourne and Brisbane have moved to reduce their elective surgery capacity. Royal Australasian College of Surgeons NSW chair Michelle Atkinson said lists were being cancelled in NSW “on a daily basis”.

Stay across the most crucial developments related to the pandemic with the Coronavirus Update. Sign up for the weekly newsletter.