As 14-year-old me walked towards the pitch, you should have seen the looks on the faces of the audience. It was an under-10s game and the boys themselves appeared a little shell-shocked, too.

I’d been studying hard for two months for this big moment — my very first match — but was clear neither the dads nor their sons had expected the referee to be a girl. They said hello, politely, but I, a jangly mix of anxiety and adrenaline, felt teeth-clenchingly self-conscious. This was 1995 — long before anyone could even imagine the ­England women’s team would win the Euros or a female referee would oversee a men’s World Cup match.

Looking back, I’m proud I gave these boys their first taste of equality. Demonstrated that girls not only play football but can take charge of the whole game, too.

I had spent my entire time at school being teased for my love of the sport. I could never know as much as the boys, they thought — here was my chance to prove them wrong. The game went well — despite being female, I managed to get the offsides right. I remember a few frustrated dads but, ­having watched my father disagree with the ref on many ­occasions, I told myself that was to be expected. Subsequent matches weren’t quite so uneventful. 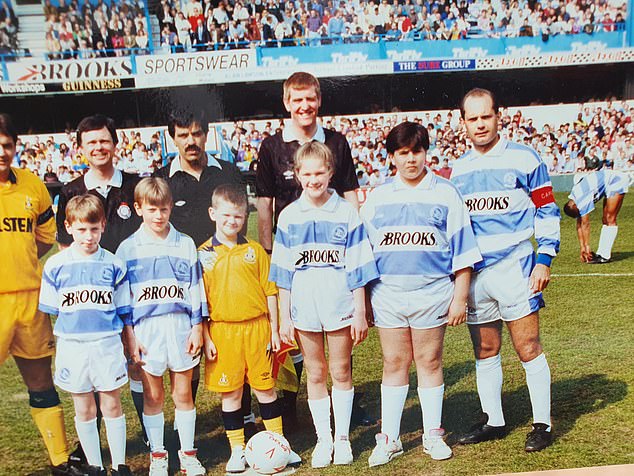 Looking back, I’m proud I gave these boys their first taste of equality. Demonstrated that girls not only play football but can take charge of the whole game, too

For three years, I took my whistle and set of red and yellow cards to whichever game I was allocated to do. After a few under-10s games, I progressed to overseeing under-12s. I was also lucky enough to be selected for the one-off weekend tournaments which would take place across West Sussex.

But as time went on, I grew fed up with the touchline terrorising. On one particular occasion, I gave a penalty to a team of 11-year-olds which prompted so much anger from their opposition that all kinds of obscenities were thrown at me. I was a slag, a b***h, a cow — and a useless one at that. I was still a child, but that didn’t temper behaviour. Sometimes even the mums would get involved. Given the names they called me, it was clear my gender was at the forefront of their minds.

I was more sensitive back then and it hurt. I felt like crying sometimes, though I don’t think I ever did. But by the time I was 17, the abuse from the crowd had got to me and, begrudgingly, I called it a day.

However, walking away is a decision I’ve learned to regret. Particularly considering this evening’s historic moment when Stephanie Frappart will become the first female referee to take charge of a men’s World Cup game.

Frappart, who has refereed in the men’s Champions League, League One and World Cup qualifiers, leads an all-female refereeing team for the Group E decider between Costa Rica and Germany.

When I first found out about this triumph, my heart felt quite full. It struck me how far things had come since the teenage me arrived at my first game. Players put up with me — a lone female presence in a man’s world back in the mid-Nineties. Today, these female officials are there on merit. They are the very best at their job. 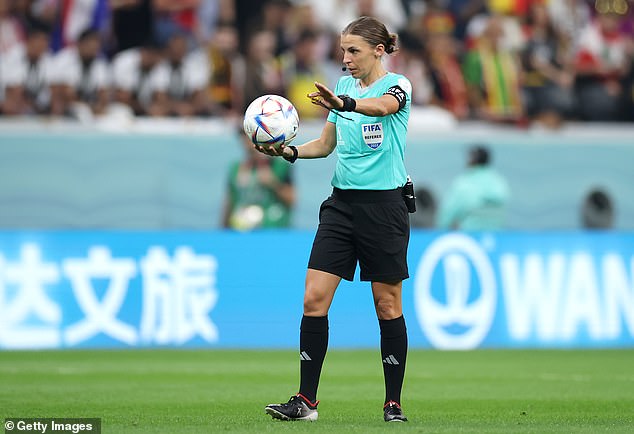 Stephanie Frappart, who has refereed in the men’s Champions League, League One and World Cup qualifiers, leads an all-female refereeing team for the Group E decider between Costa Rica and Germany

I have no doubt these women will have faced the same kind of criticism and abuse that I did — far worse I should imagine. Sexism is deeply entrenched in the beautiful game. I’m sure many remember the disparaging comments made by Sky Sports presenters Richard Keys and Andy Gray about lineswoman Sian Massey when she was officiating a Premier League match in 2011. When they didn’t agree with her offside decision, they questioned whether she understood the rule in the first place and intimated she shouldn’t be allowed to do the job. But today’s female refs kept at it regardless.

I had grown up in a football-mad household. Weekends in our house were all about the game. From the age of nine, every other Saturday, I would go to cheer on my beloved club, Queens Park Rangers, along with my dad, two sisters and stepbrother.

Sundays, however, rain or shine, I would tag along to watch my stepbrother play for his team, which my father managed. I would be on the sideline each week, looking on as a group of boys the same age as me were able to enjoy the most amazing experience of being part of a team. I would feel a pang of jealously every time they scored and celebrated together.

Why couldn’t that be me?

Although Dad let me train with them, I wasn’t allowed to play. There just weren’t the same opportunities for girls where football was concerned — not even at school. Aged 11, I went to see the PE teacher with some other girls, to ask if he could set up a girls’ team. He said he was too busy with the boys. We ramped up the pressure and he eventually arranged one game against another local school, but then he went back to being ‘too busy with the boys’ again.

One day, I had a brainwave. By then about to turn 14, and having watched my stepbrother and his team mates for three years, I suggested to my dad that I became a referee. He responded enthusiastically and was genuinely excited for me — despite his own loathing for referees! It was the perfect solution; I would be involved on my own merit. And I was already familiar with the game — despite being mercilessly ridiculed by the boys for apparently not understanding the offside rule. Plus, I had seen one female referee a few years older than me officiating in the local matches so I knew it was possible. 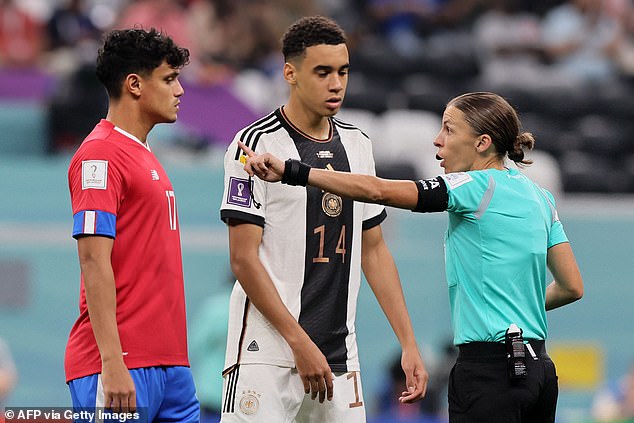 As for the World Cup’s first female referee, Stephanie Frappart will achieve what I could only ever have dreamed of. And I know only too well the grit, determination and sheer bloodymindedness it has taken to get there

So, every Monday night for six weeks, I went to a cold hall, where I was taught the regulations of the game. I wasn’t ­surprised to be the only female in the room. By this time, my sisters had lost interest in going to watch QPR and, bar my mum who is a Tottenham fanatic, I didn’t know any girls who were interested in football. But I passed the exams with flying colours, coming top of the class.

In preparation for my first game, I went with my dad to buy a referees kit — black with thin white stripes, which I wore with matching black knee-high socks and a pair of my stepbrother Dominic’s old football boots — and the all-important red and yellow cards. Dad was so proud. From then on, he would drive me to and from games. Sometimes he would stay and watch and couldn’t help but critique me himself.

I remember it all with pride. The pinnacle of my reffing career was when I was lineswoman for a cup final. I was also asked by fellow pupils — boys, of course — in the sixth form to referee their end of year match.

My female friends, meanwhile, had absolutely no idea why I was doing it.

When I decided I just couldn’t carry on any more, I quietly gave it up. It was the end of the 1998 season. There was no fanfare — I didn’t make a fuss. I think my dad was secretly relieved; he knew how horrid the insults thrown at me had become. And while I don’t think for one minute there should be different treatment for female refs, it had taken its toll.

Football was, and still is, a huge part of my life. I was such a QPR fanatic that I had been a mascot back in 1992 — the only girl, of course.

Looking back, I truly believe it kept me on the straight and narrow as a teenager. While I was at football, my friends from school spent their Saturday afternoons shoplifting perm kits from Boots and lip balms from the Body Shop. That’s not to say I was a tearaway, but I could have easily joined them.

And it seems I’m something of a family trailblazer, too. I am absolutely delighted that my seven-year-old niece Ruby has just started playing football. She scored two goals on Sunday and absolutely loves it.

She was inspired by the Lionesses, as well as her male cousins who are football obsessed. She realised she could do it, too. I’m glad to see that these days there are fewer boundaries in her way.

Now, for the first time in many years, I am seriously considering re-doing my referee training — because girls, like me in the early 1990s, need to see that it isn’t unusual for females to oversee as well as play the game.

As for the World Cup’s first female referee, Stephanie Frappart will achieve what I could only ever have dreamed of. And I know only too well the grit, determination and sheer bloodymindedness it has taken to get there.