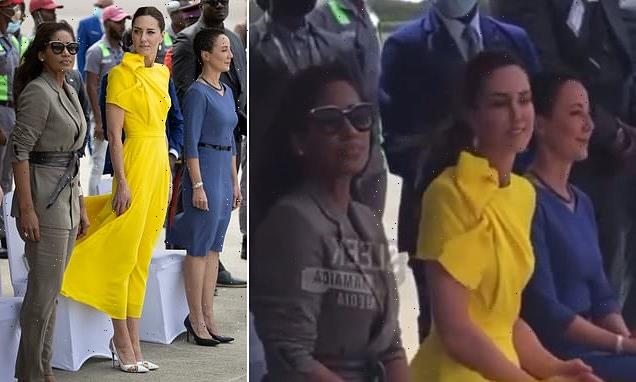 Kate given the cold shoulder! Fans cringe over ’embarrassing’ moment Duchess is shunned by Jamaican beauty queen turned politician whose party is in favour of removing the Queen as head of state

Royal fans claimed the Duchess of Cambridge was given the cold shoulder by a Jamaican politician after a video of an awkward exchange emerged online.

During a ceremonial welcome at Kingston’s Norman Manley International Airport, Kate, 40, appeared to be shunned by Lisa Hanna, a former Miss World turned politician with the People’s National Party.

The People’s National Party, led by Mark Golding, is in favour of removing the Queen as head of state and lobbying Britain for reparations.

In one moment caught on camera, the Duchess turned to speak to Ms Hanna, only for the politician to turn away. 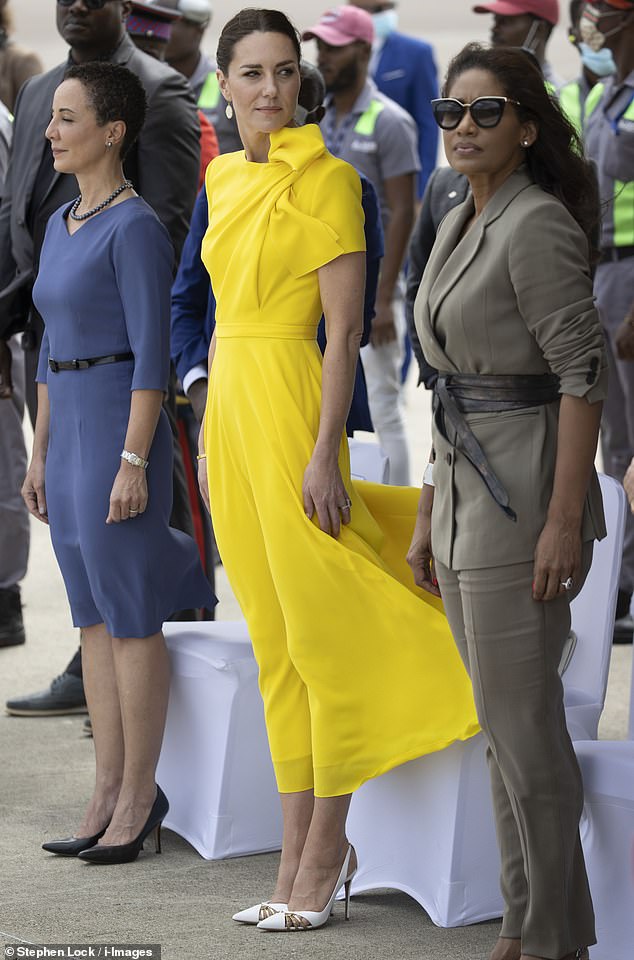 Awkward arrival: The Duchess of Cambridge appeared to be given the cold shoulder in an awkward exchange with a Jamaican politician whose party is calling for a referendum to abolish the monarchy. Pictured, Kate with former Miss World Lisa Hanna (right) ow a politician with the People’s National Party 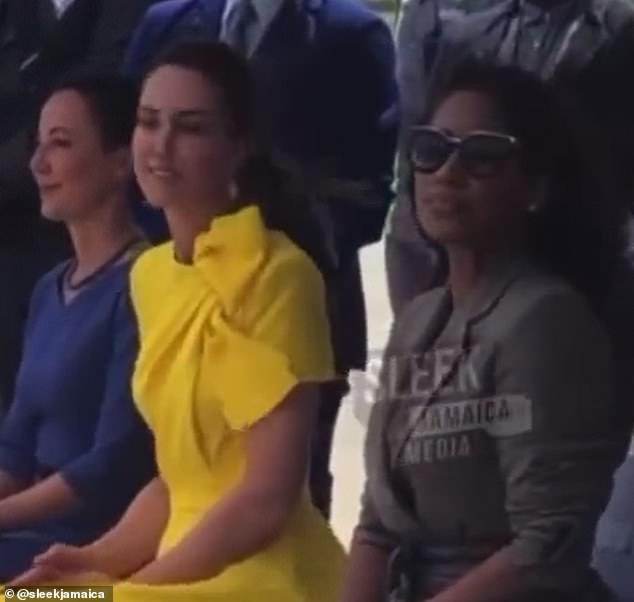 Cold shoulder: In one moment caught on camera, Ms Hanna (right) appeared to turn away from the Duchess when she tried to speak to her

Ms Hanna was unsmiling and Kate quickly dropped her own smile and faced forward.

It went viral on Twitter, where royal followers said they had ‘second hand embarrassment’ just from watching the clip.

Another tweeted: ‘Yikes!!! The embarrassment!’

However elsewhere in the ceremony the pair were filmed happily chatting and smiling to each other, suggesting that perhaps Ms Hanna simply didn’t hear the Duchess above the sound of the wind on a blustery day.

Mr Golding said he plans to tell the royals that many Jamaicans want an apology from the monarchy for past atrocities and involvement in the slave trade.

The opposition leader welcomed the royals to Trench Town and will attend the Governor General’s dinner tonight where the Duke of Cambridge is expected to acknowledge the issue of slavery. 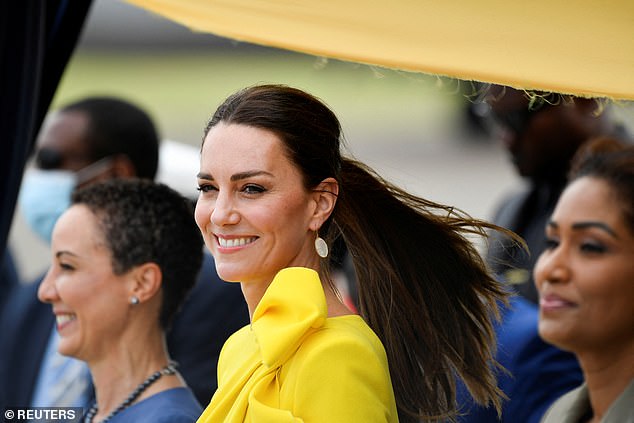 Blustery day: Elsewhere in the ceremony the pair exchanged a few words, so it is unclear if perhaps Ms Hanna (just seen right) simply didn’t hear the Duchess above the sound of the wind on a blustery day

Mr Golding told the Gleaner, a national Jamaican newspaper: ‘I would hope that I get the opportunity during the events that I will be attending to have that dialogue with them and to bring it to their attention in a courteous and respectful way that this is the view held by many Jamaicans.

‘And that I think it would be helpful both to the royal family and Jamaica for them to consider this as a means of starting to move forward to a new future.’

Their arrival came as up to 100 people demonstrated outside of the British High Commission in Kingston at having a UK head of state and the issue of Britain’s historic role in slavery.

A royal aide said that the duke and duchess were ‘aware of the protest’.

The Duke and Duchess of Cambridge were accused of benefitting from the ‘blood, tears and sweat’ of slaves as they arrived in Jamaica on Tuesday to be met by a protest calling for reparations from the British monarchy. 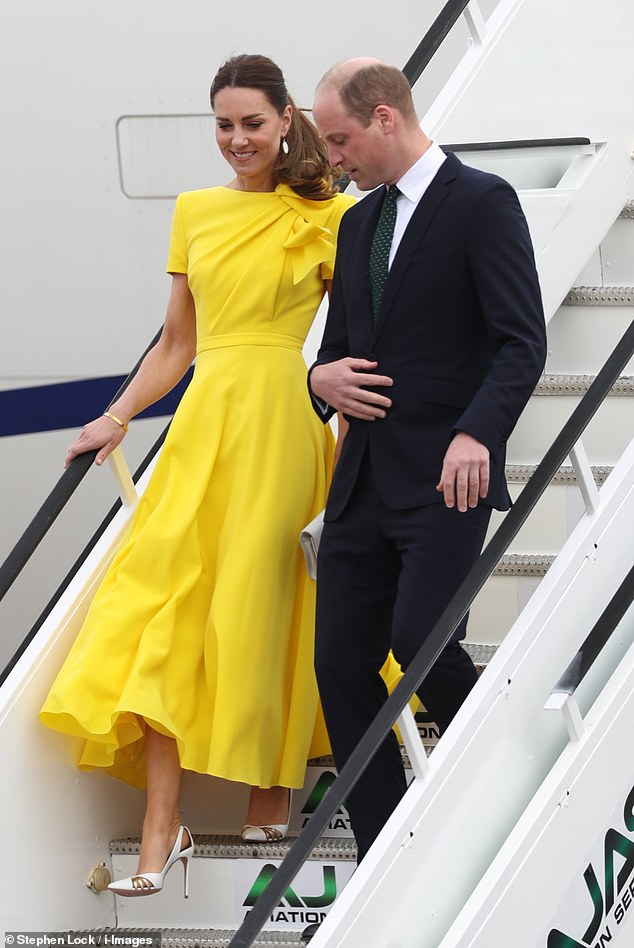 The Duke and Duchess of Cambridge arriving in Jamaica today. Kate’s version of the bespoke gown has been designed with short sleeves, however the dress is available without sleeves 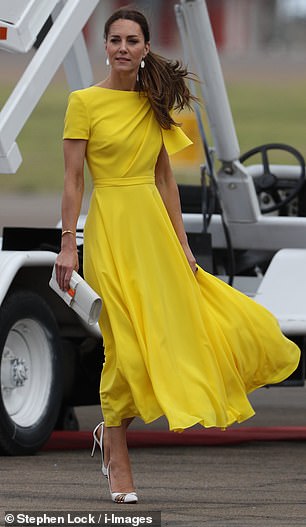 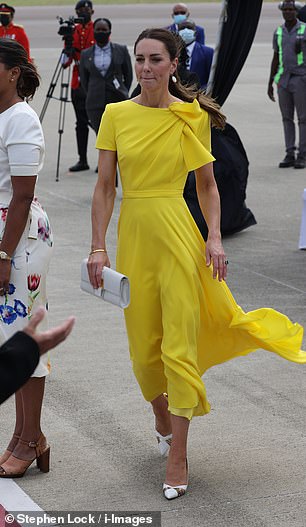 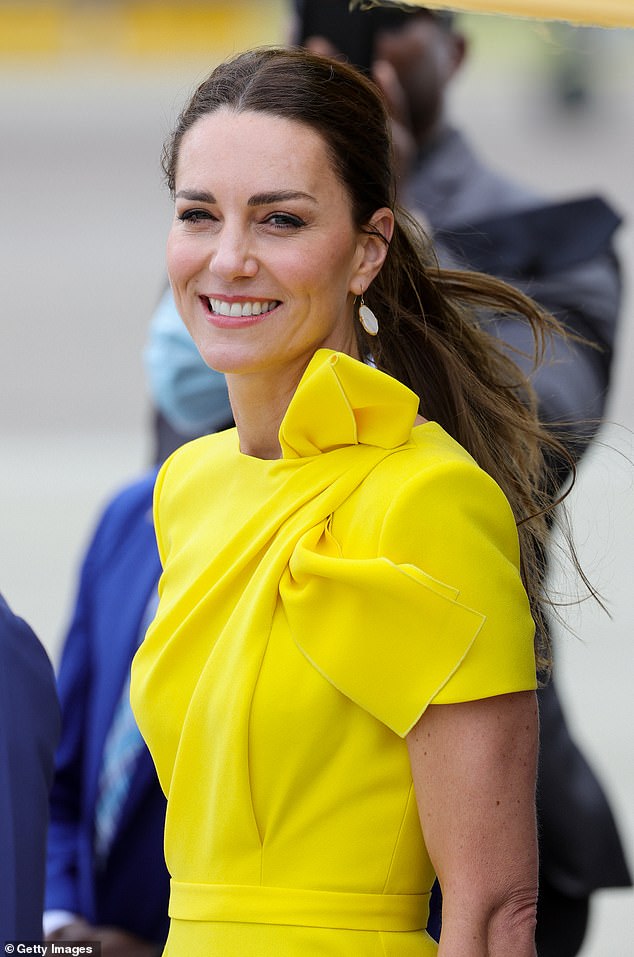 And the Advocates Network coalition of Jamaican politicians, business leaders, doctors and musicians wrote an open letter detailing 60 reasons why the monarchy should compensate the country.

It is now understood that Jamaica’s decoupling has been discussed at the ‘highest levels’ in government, with one political source even saying a senior figure had been appointed to oversee the changeover.

Another political insider told The Independent: ‘The government has had to start the process; the road to becoming a republic is not an easy one but they have long been coming under significant pressure to do it.’ 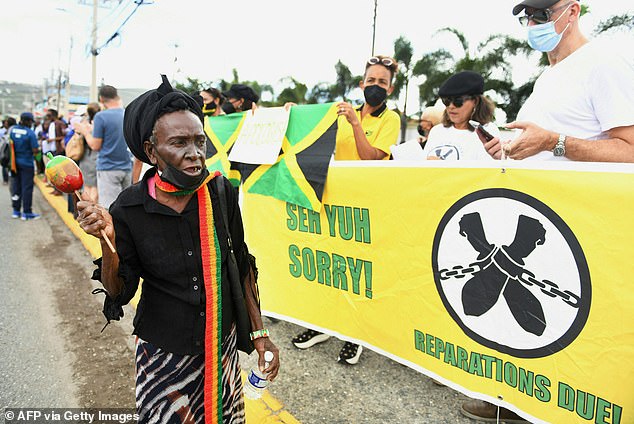 The couple, though, were kept well away from protestors outside the British High Commission building (above) as they arrived for an official meeting with the Governor General of Jamaica Patrick Allen

BAZAAR.com also reported that the government has started the ‘long and arduous process’ and aims for it to be completed by August 6 – exactly 60 years after Jamaica gained its independence from the UK.

Marlene Malahoo Forte, who was Jamaica’s attorney general until January, in December told the local newspaper Jamaica Observer that she had received instructions from Prime Minister Andrew Holness to reform the constitution to become a republic.

A senior government official speaking to Bazaar.com said it will be ‘full steam ahead in the coming weeks and months’, and another source added that while there had been ‘some pushback’ from members of parliament it was not the majority.