Len McCluskey, the bully-boy leader of the Corbynista Unite union, can bluster and rage and violently denounce those who have questioned the physical health of the Labour leader.

Only the deluded will listen to him.

Those who know of McCluskey will recall the timeless reply of the Sixties courtesan Mandy Rice-Davies to the defence barrister in the Profumo Affair, who had put it to her that an aristocrat had denied an affair with her. She responded: ‘Well, he would, wouldn’t he?’

McCluskey’s insistence that the 70-year-old Labour leader is ‘strong’ and there is ‘nothing wrong’ with his health — despite leaked rumours from the Civil Service to the contrary — also totally misses the point. 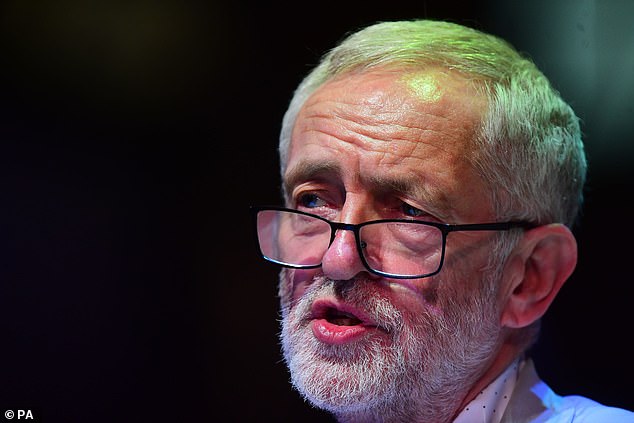 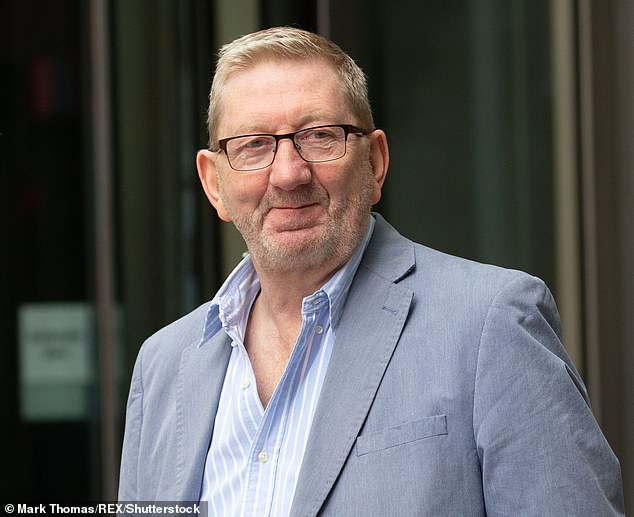 Corbyn could have the strength of Atlas, the speed of Usain Bolt and cycle faster than Bradley Wiggins on his rusty (oops, sorry, trusty) bike; it doesn’t matter.

The truth is that, intellectually, he is not up to the job of leading the Opposition or of being Prime Minister. He never has been, never will be. It has been glaringly obvious ever since he entered the Commons in 1983.

Corbyn has never made a speech, uttered a phrase, outlined a policy unique to his thinking or promoted an original thought. There is simply an empty space where his political brain should be.

More than three years ago, I wrote a lengthy article in the magazine of the sensible Left, the New Statesman, urging that Corbyn be overthrown by his fellow MPs in the Parliamentary Labour Party (PLP).

I suggested his intellect — he got two E grades in his A-Levels — perhaps made him best suited to being a kindly deputy manager of a small building society in the East Midlands. And ever since, I have inwardly apologised to anyone fitting that description.

I campaigned against Corbyn from the moment he was elected leader under a system put forward by Ed Miliband that allowed every Tom, Dick and Militant Trotskyist to join the movement for a derisory fee and vote for the leader. 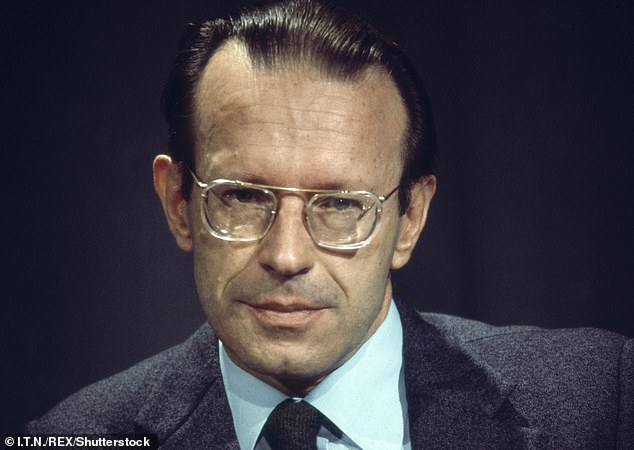 Even though I was press secretary to a former Labour Prime Minister, Harold Wilson, I campaigned against Corbyn from the moment he was elected leader

For years, John McDonnell, now Shadow Chancellor and the only intelligent man in the Corbyn circle — and sinister with it — carried the flag for the far Left and was defeated when he stood for the leadership.

When Miliband resigned after Labour’s defeat in 2015, it is said that McDonnell concluded it was time that someone else carried the banner for this hopeless cause. Corbyn was told: ‘It’s your turn.’

McDonnell must still curse that day. This result opened a dark chapter in Labour’s history to which new pages are being added every day.

In a letter to The Times yesterday, Bernard Donoughue and I — two of the principal advisers to Harold Wilson when he was Prime Minister in the Seventies — drew some comparisons between Wilson and Corbyn.

There is one crucial difference: when Wilson realised his mental powers were failing he determined to resign. Right after the first General Election of 1974, aged 57, he put a term on his remaining time in office: two years. He knew the decline was setting in.

Despite every pressure, personal and political, despite every effort by his hitherto all-powerful political secretary, Lady Falkender, to get him to stay in No 10, Wilson went, a month after the second anniversary of that election.

There are further crucial differences between the men. 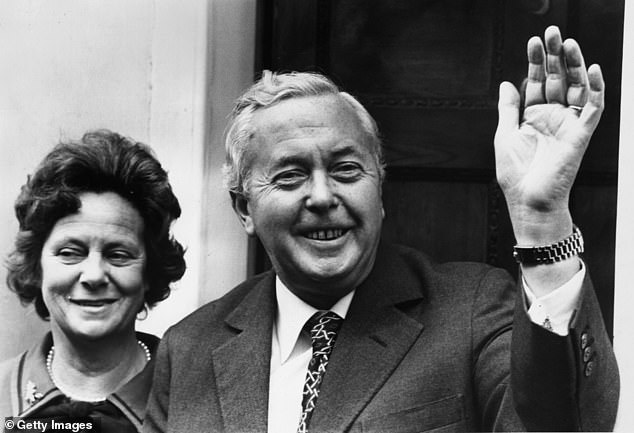 When Harold Wilson realised his mental powers were failing he determined to resign, unlike the current Labour leader

Wilson admired Israel, still the only true democracy in the Middle East, and was a friend of the Jewish people. When the Cold War was at its height, he secretly arranged for 80 Jews — Russian citizens — to leave the Soviet Union and travel to safety in Israel.

Were he alive, he would be ashamed and disgusted that Labour’s leader today is so indifferent to anti-Semitism that he allows it to run riot through the party. For Wilson, that would have been a resigning matter.

Nor would he have waged class war in the ugly style preferred by Corbyn and his cronies. Wilson was middle-class himself, but he never forgot the long periods when his father was unemployed.

Lloyd George, Gladstone, Disraeli, Macmillan, Attlee, Wilson, Thatcher, Blair: the history books and our shared political memory are replete with anecdotes about them, and with their sayings. They helped to shape the rich history of Britain.

Yesterday, I scratched my head and tried to recall a single remarkable fact about Jeremy Corbyn from the day, more than 35 years ago, when he first entered the Commons and began to make speeches that emptied the House, up to now.

I consulted old colleagues and asked them for one memorable story about him. They came up with two: an affair with Diane Abbott, now the Shadow Home Secretary, and his motorbike tour through East Germany with her riding pillion. Such memories!

Never will we hear or read anything of Corbyn’s maxims, as we do Wilson’s, who said that ‘a week is a long time in politics’, and who coined the useful rule: ‘Never enter a room without knowing where the exit is.’

Never will we hear from Corbyn phrases that capture the imagination, such as Macmillan’s ‘wind of change’ and ‘you’ve never had it so good’. Never will Corbyn’s oratory chill the marrow as did Enoch Powell’s ‘rivers of blood’ speech, or stir deep emotions, as did Blair when he described the late Diana as ‘the people’s princess’.

And before any Corbyn loyalist trumpets the slogan ‘For the many, not the few,’ may I point out that Blair said this first? Corbyn shamelessly plagiarised it.

In any case, that phrase was brilliantly devalued by Clare Foges, a former adviser to David Cameron, who summarised Labour’s present policy and its institutional anti-Semitism as: ‘For the many, not the Jew.’

Corbyn’s thousands of supporters, who blindly see no wrong in him, believe they have one last defence: that he took the party to the brink of victory in the 2017 General Election and brought it hundreds of thousands of new members.

To them, the short answer is: No, he didn’t.

After the calamities of David Cameron’s last years in office and austerity, the Labour Party should have won that ballot by a landslide.

As anyone who canvassed for Labour two years ago will tell you, again and again on the doorstep people said: ‘I’m not voting for Jeremy Corbyn.’

He was the real reason Labour didn’t win.

True, thousands of young voters rallied to him. But they won’t do it again: there were no chants of ‘Oh, Jeremy Corbyn’ at Glastonbury last weekend, as there were two years ago.

And the party is still stuck with a rag-bag of ex-Communists, Trotskyists, militants — including in Corbyn’s office. All ‘flat Earthers’, politically speaking.

Any other opposition in history would have been a mile ahead of the Government, given the multitude of rows, splits and resignations Theresa May faced as her premiership stumbled to its ignominious end. But in most polls, Labour still languishes behind the hopeless Tories.

The Tories are now doing something about their position: they are getting a new leader. So are the Lib Dems, finally ridding themselves of the last vestiges of the leadership that promised to abolish tuition fees before the 2010 election and then helped to triple them in coalition with David Cameron’s Conservatives.

Now it is Labour’s turn.

If Corbyn won’t go of his own free will, he should be forced out by his MPs. It can be done, despite the fact that they have tried and failed before.

The way is there as long as the will can be found. If it isn’t, then God help our country.