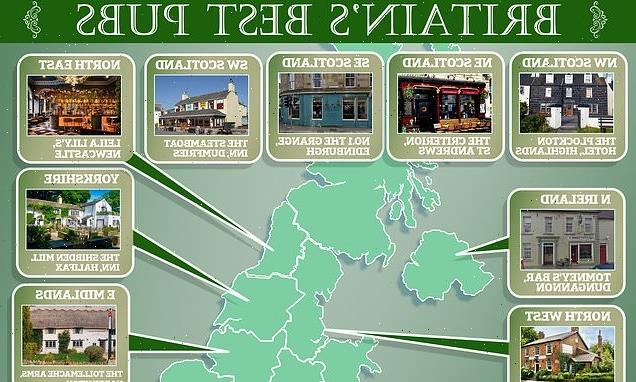 Best pubs in Britain revealed: Family-run Galvin Green Man in Essex wins top prize at National Pub & Bar awards as 15 boozers are named the best in their region – so does YOUR local make the cut?

A family-run boozer in Essex has been named the best pub in the UK at the National Pub & Bar awards.

Galvin Green Man in Chelmsford, which is run by Essex-born brothers Chris and Jeff Galvin  secured the top accolade at the glitzy-ceremony on Monday.

The venue, which was refurbished and opened by the Galvins in 2016, was commended for its first-class delivery of food, drink, service and all-round pub experience.

Set in 1.5 acres of peaceful meadow amidst the beautiful Essex countryside, with the River Chelmer running through the beer garden, the charming Green Man is said to be one of the oldest pubs in Essex, built in 1341.

It’s also in the Michelin guide and has a Bib Gourmand- which denotes ‘good quality, good value cooking’. The red book describes it as ‘full of rustic charm’ and that is serves ‘carefully constructed and full of flavor’. 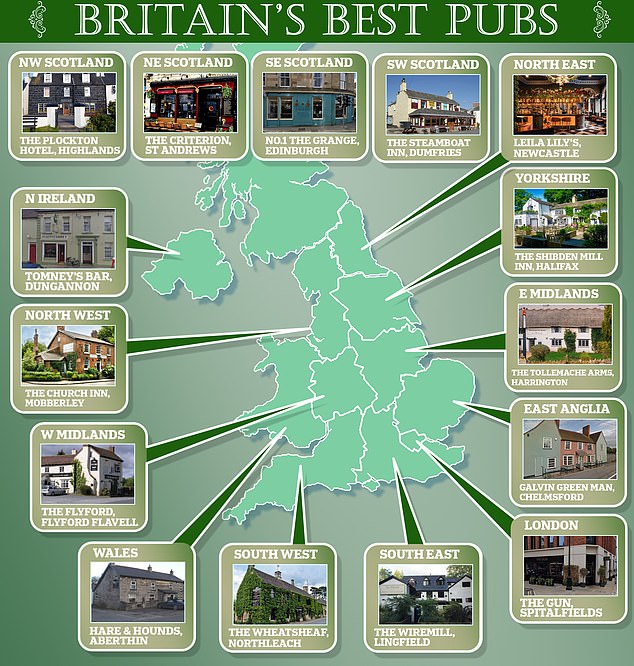 Galvin Green Man in Chelmsford, which is run by Essex-born brothers Chris and Jeff Galvin secured the top accolade at the glitzy-ceremony on Monday. While dozens of others where named the best in their region

Yorkshire and the Humber – The Shibden Mill Inn, Halifax

Pub Chef of the Year – Simon Vickers, The Griffin, Dyfed

Coca-Cola Europacific Partners Bar Brand of the Year – The Alchemist

Galvin Green Man was also one of 15 pubs to be named as the best in its Region, as 94 county-winning venues gathered at 30 Euston Square to acknowledge the finest businesses in the industry.

Celebrating and championing the UK pub and bar market, the theatre-style event was hosted by restaurant critic Grace Dent.

‘To come through the last year and a half and be recognised like this is fantastic,’ Chris Galvin told FEMAIL.

‘It’s all about looking after our locals and anyone that visits. We try our best day in, day out. It’s important to mention our suppliers, who have been on the same difficult journey and often get forgotten. They redoubled their efforts when we reopened.’ 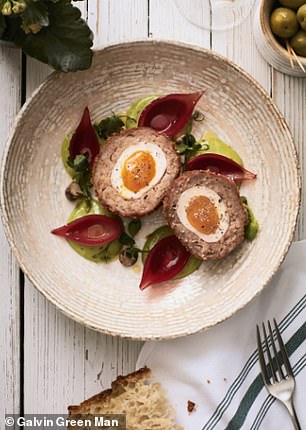 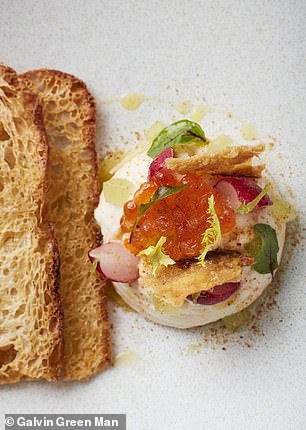 Hotel of the Year – Independent, sponsored by Travelzoo – The Fife Arms, Aberdeenshire

Hotel of the Year – Group, sponsored by phs Direct – The Berkeley, London

‘We have a fantastic team, an incredible community and brilliant suppliers. We love what we do, so it’s great to know that other people love it too.’

As is the case each year, there were 94 pubs and bars represented at the awards, each one having been previously announced as the best in their county.

From these, 15 Regional Winners were selected before Galvin Green Man was crowned the National Winner.

It comes as the winners of the annual Catey Awards were announced at London’s Grosvenor House, a JW Marriott Hotel, last night.

The Catey awards recognise the most talented individuals, biggest brands and strongest performers in the hospitality industry. The shortlists and winners are decided by industry judges chosen for their expertise and industry knowledge, making the Cateys the ultimate accolade in peer group recognition.

Many of the winners were recognised for the compassion they demonstrated with both employees and communities in what has been one of the most challenging periods the hospitality sector has ever experienced.

The Lifetime Achievement went to chairman and chief executive of Westbury Street Holdings Alastair Storey in recognition of a career driven by passion, enthusiasm and commitment combined with audacious acquisitions that have helped him to create one of the most impressive businesses of our time.

Sketch founders Pierre Gagnaire and Mourad Mazouz received the International Outstanding Achievement Award for having created a unique venue in their Mayfair restaurant with a worldwide following.

This year’s Chef Award went to Andrew Wong, whose restaurant A Wong in London was awarded with two Michelin stars last year, making it the first Chinese restaurant in the world outside Asia to do so.

Editor of The Caterer, James Stagg told FEMAIL: ‘It was incredibly special to welcome the industry’s finest operators back to Grosvenor House Hotel once again. The Cateys is always a memorable evening but this year’s was even more so given the incredible challenges operators have faced.

‘As well as being a celebration of the industry’s resilience and determination, we were able to reward some of the individuals and businesses who have really shone in the past year. Hearty congratulations to all of our shortlists and winners. In a year like no other they have proved what innovation and agility there is in the hospitality sector.’