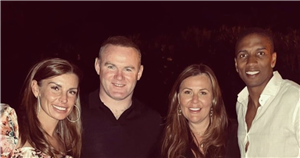 Coleen Rooney has taken to Instagram to share a look inside hers and Wayne's fun getaway with pals.

The 35 year old star whizzed off to a beachside restaurant with hubby Wayne, 35, to enjoy some time away.

Documenting the past few days on her Instagram account with her 888,000 followers, mum-of-four Coleen told fans it'd been a "lovely few days," followed by a sun and Champagne emoji.

Coleen and Wayne had been spending time with footballer Tom Cleverley and his former TOWIE star wife Georgina.

Coleen looks gorgeous in the photos shared with her Instagram base.

In the first she poses in a white blazer while having dinner with pals, and in the second Coleen opts for a floral top and Wayne wraps his arm around his wife as they stand with friends.

In another snap, Coleen enjoys drinks with her girlfriends while wearing a matching sun hat and dress.

At the end, TOWIE star Georgina Cleverley, who is pregnant with twins, can be seen oozing glamour and revealing her baby bump.

The last picture sees Wayne posing with some of his guy friends, including Georgina Cleverley's husband Tom.

Coleen and Wayne's getaway with friends comes after the couple headed to Scotland to have some quality time together.

To celebrate the relaxation of lockdown rules in the UK, the Rooney’s made the most of their newfound freedom to take a trip to Scotland.

The famous couple began their luxurious break at the five-star hotel, Gleneagles, in Scotland while they enjoyed a night off from parenting.

Wayne made sure to wine and dine his childhood sweetheart as the couple went out for dinner at the two Michelin star restaurant.

The couple paid tribute to their night alone with a beautiful selfie together following their extravagant meal as they flashed a sweet smile at the camera.

Coleen dressed up for the night off from mummy duties, and opted for a bold fuchsia dress which showed off her slim figure with delicate puffy sleeves and a large peter pan collar.

The mum-of-four pulled her hair back into a half up half down do letting her sleek brown hair fall over her shoulders.

The couple, who's eldest son Kai recently signed a youth contract with Manchester United, are clearly happy to be out of the house again as the enjoyed their fine dining experience at the beautiful establishment complete with impressive paintings and velvet booths.