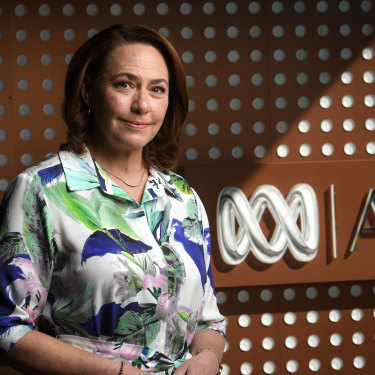 Lisa Millar was subjected to a stream of online abuse even while she was on air, forcing her to quit Twitter.Credit:Justin McManus

Lisa Millar didn’t set out to make a statement when she closed her Twitter account a week ago. “I just deactivated it, I didn’t announce it,” the co-host of ABC TV’s News Breakfast says. “I wasn’t looking to make a fuss.”

But with 55,000 followers and the national profile her on-air role brings, it was inevitable that people would notice. And inadvertently or not, her decision to join the ranks of Australian journalists who have decided they can live without what was once hailed as the democratic “town square” of social media – Waleed Aly, Stan Grant, Hamish Macdonald among them – has shone a spotlight on just how toxic a space it has become for many in the profession.

Millar says she took little joy in opting out of a platform that has proven enormously useful. “When I was in the Washington bureau, we first saw news of the Boston marathon bombing on Twitter. It is still the best platform for breaking news, including getting the daily COVID case numbers. But I’m having to balance that against the level of animosity directed towards me, which went well beyond criticism of my work.”

Millar was accused of political bias, particularly in her coverage of COVID. The fact her father Clarrie Millar represented the Country Party in Queensland was taken as proof of Coalition bias in her reporting. And tweets making those observations – alongside gender-based abuse (a common feature of attacks on female journalists on the platform) – were visible to her in real-time as she presented. 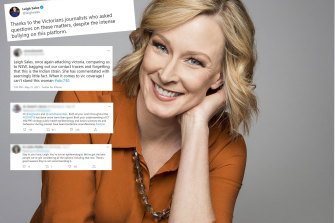 7.30 presenter Leigh Sales has faced criticism for her coverage of the Victorian lockdowns. Credit:Daniel Boud

“It got to a point where there was nothing I could do and the balance had totally swung,” she says. “I could not stop the constant barrage of criticism while we were on air. I do 15 hours of live TV a week – there are going to be words that come out of my mouth that aren’t exactly right.”

Millar used tools embedded in the app to filter abusive comments. These range from automated machine-learning detection of likely offensive or abusive words to muting repeat offenders. But this still left her exposed to tens of problematic messages, rather than the hundreds she was seeing before she applied the filters.

Though it has been criticised for not doing enough to combat abuse, Twitter claims it is on a mission to “mak[e] it easier to follow and participate in healthier conversations” on the platform, through tools including the digital equivalent of an experimental “want to revise this?” prompt when a user crafts a heated post. It is also beta testing a “safety mode” that would allow users to block for seven days accounts using “potentially harmful language”, such as insults or hateful remarks.

“We want you to enjoy healthy conversations,” the company said in a blog post this month. “Our goal is to better protect the individual on the receiving end of tweets by reducing the prevalence and visibility of harmful remarks.”

But those good intentions sit in conflict with the reality that Twitter rewards, and profits from, conflict. The more inflammatory a post, the more likely it is to get attention, be liked, debated, shared or quoted. It’s all engagement, and that is Twitter’s prime currency as it seeks to get advertising in front of its 192 million monthly mDAUs (monetisable daily active users) worldwide.

Writing about her own experience of Twitter this week, Millar’s colleague and long-time friend Leigh Sales claimed the “bullying and harassment … is non-stop, personal, often vile, frequently unhinged and regularly based on fabrications”.

Though it seems a special level of vitriol is targeted at women on the platform, the abuse goes beyond gender. Hamish Macdonald last month said the criticism he received on Twitter as host of Q+A “was overwhelming at times. It became something that I could not manage on my own, and I could not get away from it.”

Macdonald said it spilled into the real world too, and even followed him there when he quit Twitter in January. “And that was pretty isolating, and not something that I had dealt with before.”

According to Dr Alex Wake, program manager for journalism at RMIT, abuse of journalists on Twitter “is actually a workplace health and safety issue, and news outlets have a duty of care to protect their staff. Yes, journalists need to be resilient, and always have needed to be so – journalism is embedded in trauma – but the social media attacks are unrelenting, often personal, and are often read when people are at home with their families.”

Dr Wake says it’s not just feelings or an individual’s mental health that are at risk. “Abuse has the impact of silencing journalists in these spaces – and that hurts our democracy.”

“Abuse has the impact of silencing journalists in these spaces – and that hurts our democracy.”

That’s certainly the view of the Victorian Parliament’s Electoral Matters Committee, which this week tabled its report into the impact of social media on elections. “Abuse towards journalists and the media can damage our democracy by negatively impacting journalists’ ability and willingness to cover important political stories,” the committee members wrote. “It can also reduce media diversity by discouraging participation by those targeted for their gender, race or other attributes. This results in poorer outcomes for news audiences and a less‑informed voting public.”

Leigh Sales, who has been accused of LNP bias for questioning the Andrews’ government’s response to COVID, suggested this week that “it is overwhelmingly left-leaning Twitter users who are targeting ABC journalists for abuse”. Millar too feels the platform has drifted to the left since she started using it in 2009, but adds that ABC journalists cop it from both sides.

Yassmin Abdel-Magied, who was viciously attacked over a Facebook post on ANZAC Day 2017 in which she sought to highlight the plight of refugees and Palestinians, thinks the depiction of social media bullying in crude political terms is misguided. 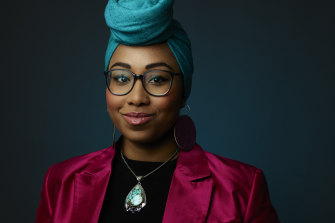 Yassmin Abdel-Magied says social media abuse paled in comparison with the attacks from the right-wing press and politicians. Credit:Kristoffer Paulsen

“People love to make this a ‘left vs right’ thing, but such positions are a distraction, obscuring underlying power dynamics,” she says from London, where she now lives. “All sides of politics have bullies. But all sides of politics do not have the same levels of access to power. Twitter is not the Murdoch Press, nor is it Parliament.

“Attacks on social media were not why I left Australia. Hundreds of thousands of words in the mainstream press, bullying by politicians, nightly abuse from media pundits and the silence of many so-called leaders was much more effective in destroying my safety and ability to contribute.”

Mike Carlton is another who copped abuse from the right-wing on social media – he resigned from The Sydney Morning Herald in 2014 after his response to reader comments on a column critical of Israel’s actions in Gaza – but remains an active Twitter commentator and advocate of the platform.

“Stories will often break there first, and it can be tremendously useful in terms of sourcing contacts,” he says. “And for all the talk of pile-ons and trolls there is actually a reasonably civil community on there.”

In his experience, “the attacks come more from the right wing, which can be vicious, malicious and totally defamatory” but says “women get more often abused than men”.

”A lot of people on Twitter and elsewhere see the whole thing through the prism of their own prejudices,” he says. “Twitter is just a reflection of society.”

And right now, inflamed by living with lockdowns, the uncertainty and fear stemming from COVID, and the ever-simmering tensions wrought by the so-called culture wars, that society is pretty fractious.

“It’s like how good you feel if you slam your hand on the horn – that’s how people feel when they drop their anger on Twitter,” Millar says. “Then they just go on to live their life. But if you get a barrage of those horn blasts all the time, it’s really very wearing.”