Genevieve Camilleri was studying biotechnology when she realised a chemistry lab was not where she wanted to spend her working life.

Loving film, creativity and computers, she switched industries. And, as one of five Australians nominated for best visual effects at the Academy Awards this month, it is fair to say it has worked out OK. 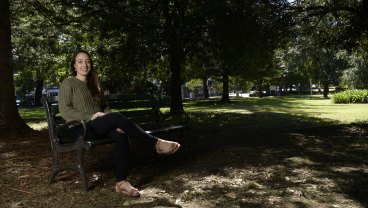 The visual effects supervisor, whose credits include Mad Max: Fury Road, Star Wars: The Force Awakens and the coming Top Gun: Maverick, was watching the Oscar nominations online at her Sydney apartment a month ago when she was stunned by a mention for the unheralded Hollywood sci-fi adventure movie Love and Monsters.

Camilleri, 36, had not even watched the finished movie, about a survivor of a monster apocalypse who heads across country to find his high school sweetheart, given it only opened on Netflix in Australia this week.

Adding to the honour is that – in the year that two women in Nomadland’s Chloe Zhao and Promising Young Woman’s Emerald Fennell are nominated for best director for the first time – Camilleri is just the fourth woman up for best visual effects in Oscars history.

Camilleri thinks it was the monsters that swung the nomination.

“They’re all based off real life creatures – a frog, a crab, a snail – but we took those everyday creatures and scaled them up into these large mutations,” she said. “They’re supposed to be sort of scary but, at the same time, they’re these fun, loving creatures as well.” 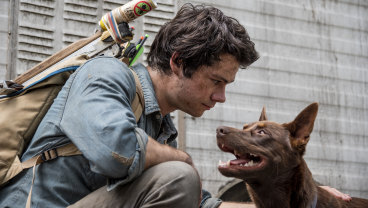 Surprise nomination for best visual effects: Dylan O’Brien and dog in Love and Monsters, which was shot in Queensland. Credit:Netflix

The pandemic means that Camilleri, who is working on artist and director Del Kathryn Barton’s new film Blaze, will not get to the Oscars, given she would have had to quarantine for 10 days in Los Angeles then another two weeks in Sydney.

So she will watch the ceremony from a satellite event with other Australian-based nominees at Channel Seven on April 26.

“We’ll still get all dressed up for the occasion and it’ll be like a live broadcast,” she said.

Sloan, who is working on a new Netflix movie in New York, will represent Love and Monsters at the Oscars but only after quarantining for five days in Los Angeles, taking three COVID-19 tests before the awards, then quarantining for another three days plus a test day on the way back.

He was by himself in New York when he learned about the unexpected nomination and considered calling room service just to celebrate with someone. “I spun around but couldn’t high five anyone,” he said.

The Queensland-raised Sloan, 48, started working on movies in special effects (“fire, explosions”), switched to animatronics and robotic creatures then realised the future was in creating those creatures with CGI.

During a career that includes two Star Wars movies, Avatar, The Avengers, two X-Men movies and The Martian, he has seen how rapidly visual effects keeps changing.

“Over the duration of your post-production on a movie, how you started is not obsolete but it can be outdated by the time you finish,” he said. 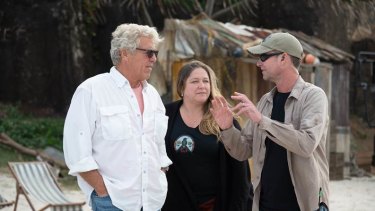 The Oscar nomination is “awesome” after a tough year. Instead of a holiday with his wife after finishing work on Love and Monsters in Los Angeles, Sloan said “we went home and basically stayed there for a year”.

Their movie is up against favourite Tenet, another Netflix sci-fi movie, The Midnight Sky, and the Disney movies Mulan and The One And Only Ivan.

Sloan thinks the fact that all Academy members get to vote rather than just the visual effects branch gives them a chance. “That levels the playing field significantly,” he said.