Now, the American fast-food chain hasat least 650 locations throughout the country.McDonald’s is thriving in Russia, with the number of restaurants growing 6% last year, as compared to the global average of 1.5%, The Wall Street Journal reported. And most of the restaurants in Russia cook with ingredients that are sourced from local Russian suppliers, according to the Journal.

Read more:I toured a gated estate outside of Moscow that was built by the ‘Trump of Russia.’ From its golf course to the mansions I was forbidden to photograph, it wasn’t hard to see its appeal for the country’s billionaires.

On a recent trip to Russia, I ate at the first McDonald’s to open in Moscow, and it was a step up from the locations I’ve visited in the US.

The first McDonald’s opened in the USSR in January 1990. 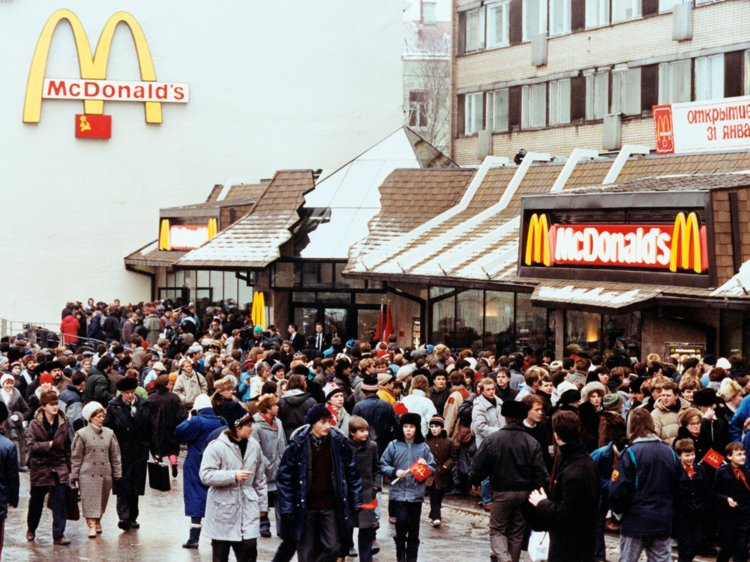 More than 30,000 people waited in line in the cold for hours to be the first to eat at the American fast-food chain. Many of them, The Wall Street Journal reported in 2007, had never tasted burgers and fries before.

Now, there areat least 650 McDonald’s throughout Russia and thefast-food chain is thriving in the country.

On a recent trip to Russia, I ate lunch at the country’s first McDonald’s, which is in Moscow, to see how it stacks up against its counterparts in the US. 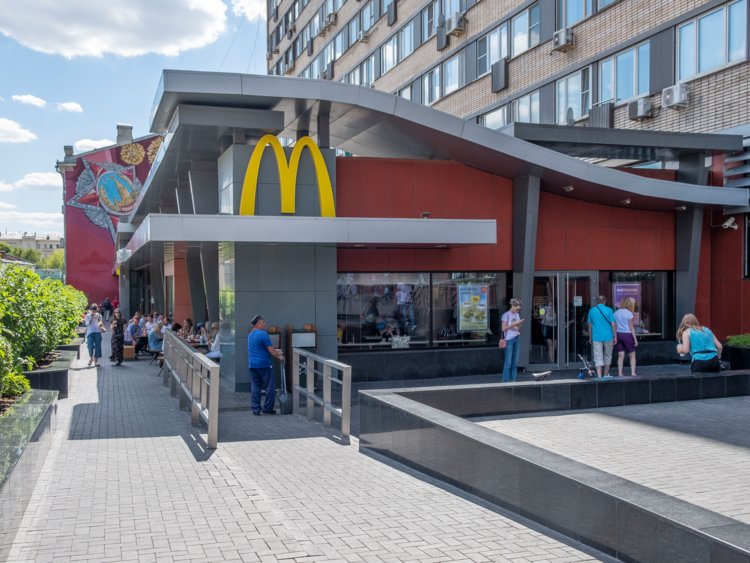 Russia’s first McDonald’s is in central Moscow at Pushkin Square, right offfamous Tverskaya Street and steps from the metro.

When I stepped inside, I was surprised by how spacious the fast-food restaurant was. 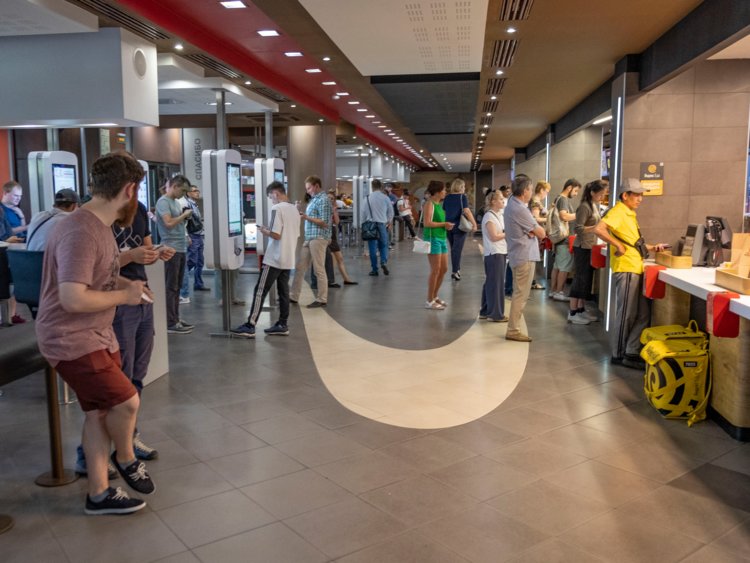 It also seemed very clean. I didn’t see any garbage on the floor or half-eaten food sitting on empty tables.

The McDonald’s sprawls over several levels. 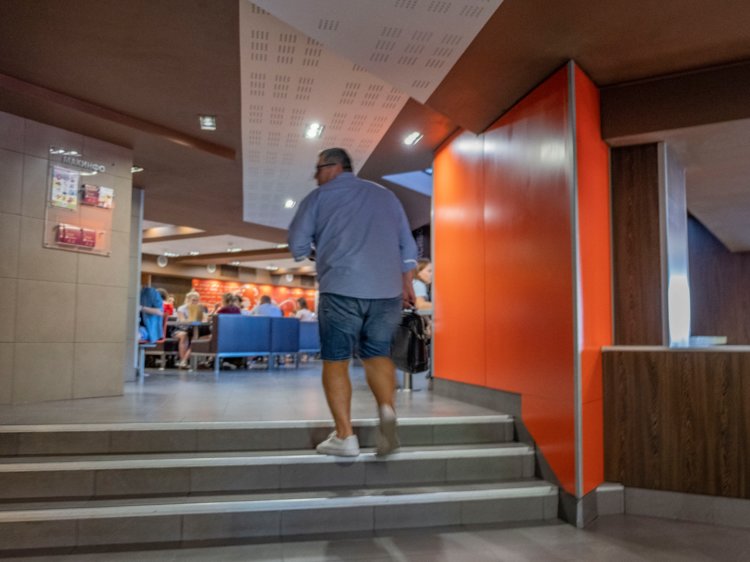 Some people were ordering in person at the counters. 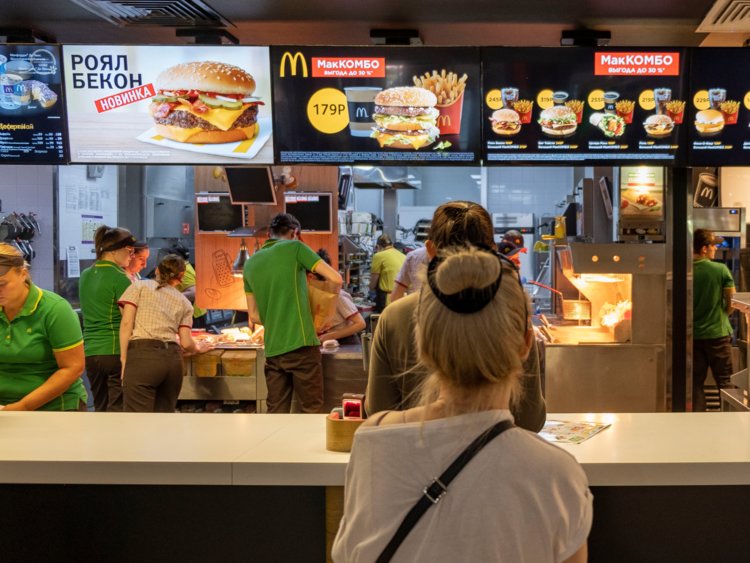 But the location also had at least eight double-sided ordering kiosks. 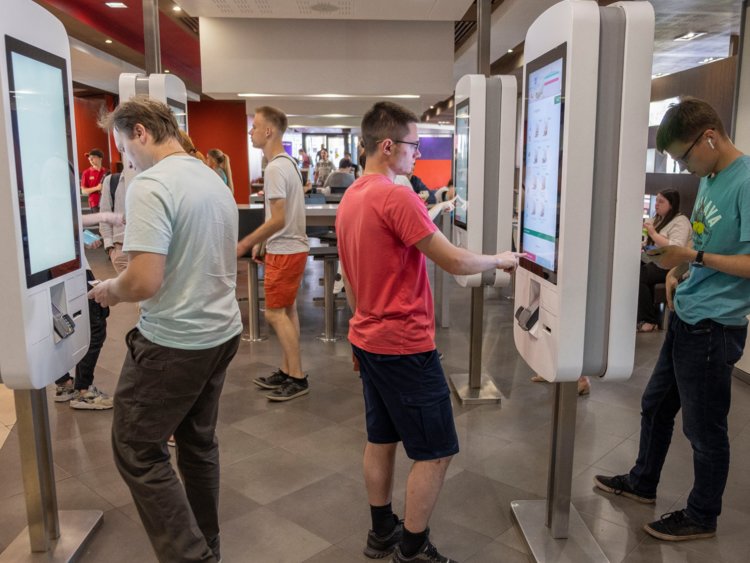 Many of the customers appeared to be young people and teens.

I can’t read the Cyrillic alphabet, so the main menu behind the counter wasn’t particularly helpful to me. 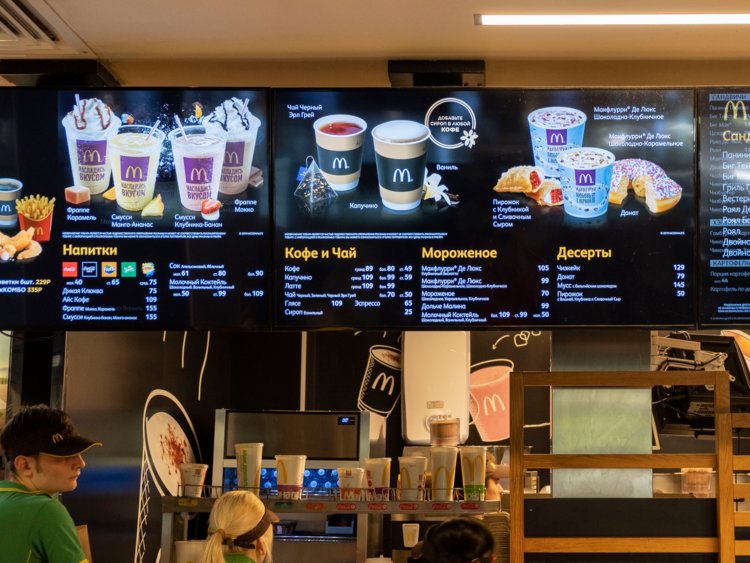 I did see illustrated items like coffee, tea, smoothies, McFlurries, and donuts.

I made my way over to an ordering kiosk and was relieved to see it could be operated in English and several other languages. 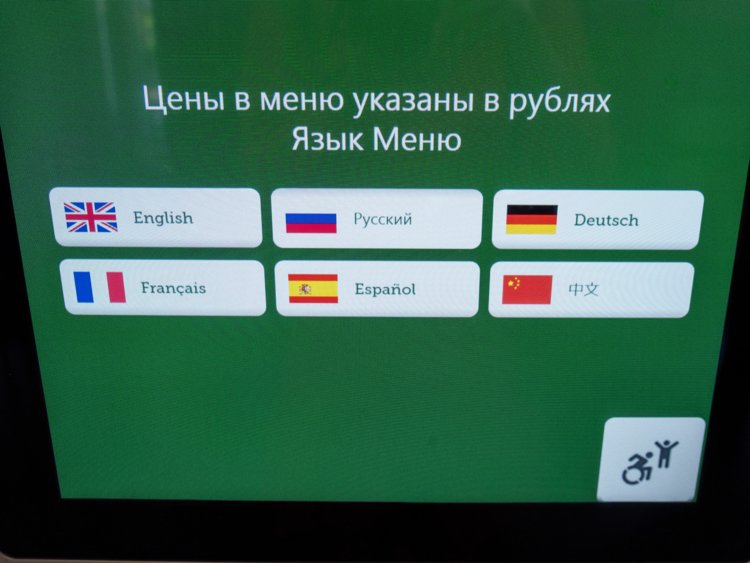 I don’t read or speak any Russian.

I browsed through the menu to see what a Russian McDonald’s might have that a US location wouldn’t. 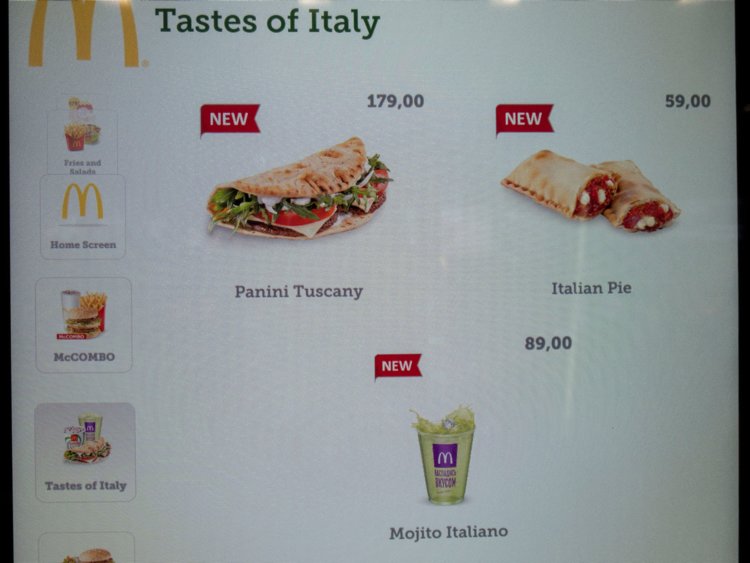 I was secretly hoping to see some menu items made with stereotypical Russian foods, like a caviar burger or vodka-spiked McFlurries.

Instead, I was surprised to see a “Tastes of Italy” section that I’ve never seen in the US, which included a Tuscan panini, an “Italian Pie” that resembled a Hot Pocket, and something called a Mojito Italiano. McDonald’s in Russiadoesn’t sell alcohol as it does in some countries like France, Germany, and South Korea.

The Moscow McDonald’s had more seafood options than I was expecting. 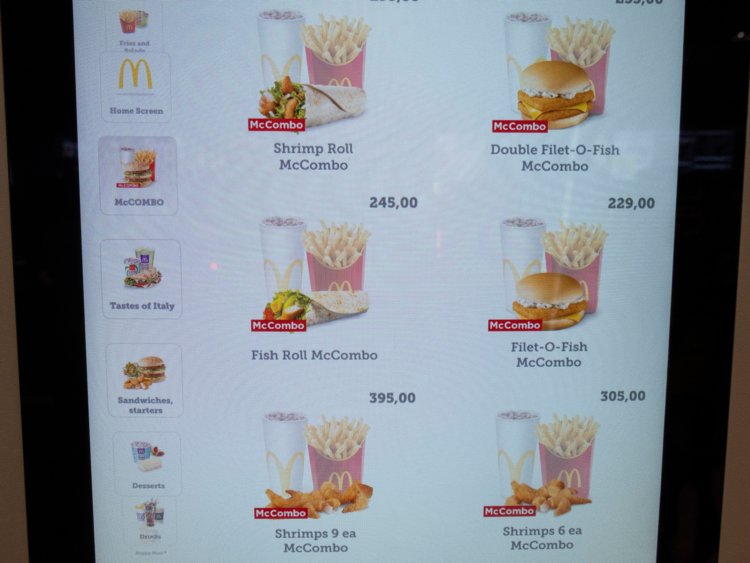 In addition to the classic Filet-O-Fish sandwich, the menu included fried shrimp, a shrimp roll, and a fish roll.

When I got back to the US, I popped into a McDonald’s across the street from my office in New York City and saw that it offered only the Filet-O-Fish, no shrimp or fish rolls.

Ultimately, I decided to go with a classic: the Big Mac. 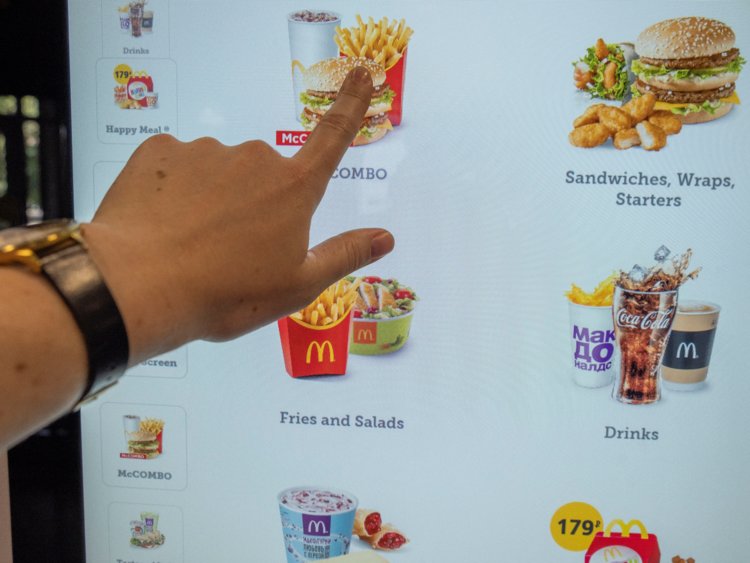 With fries and a Coke, of course. 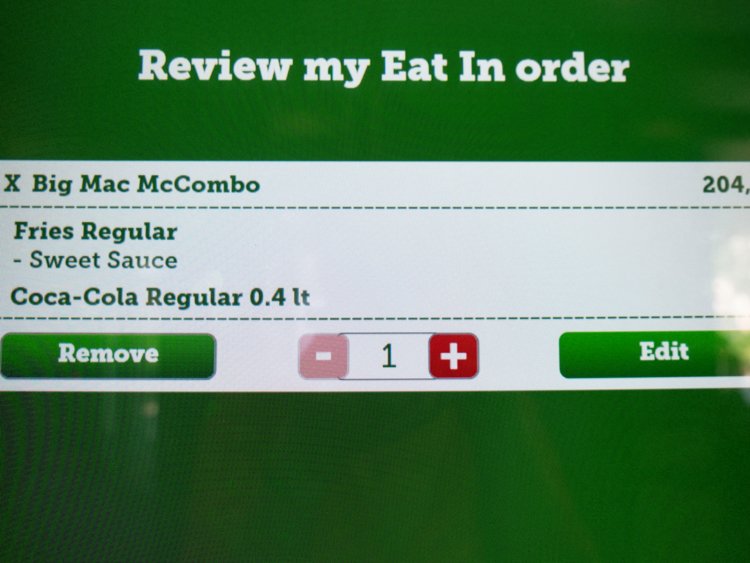 At the McDonald’s across the street from my office in New York, the same meal cost $9.79.

After I paid with my credit card at the kiosk, the machine printed out my receipt, which had the number 857 on it. 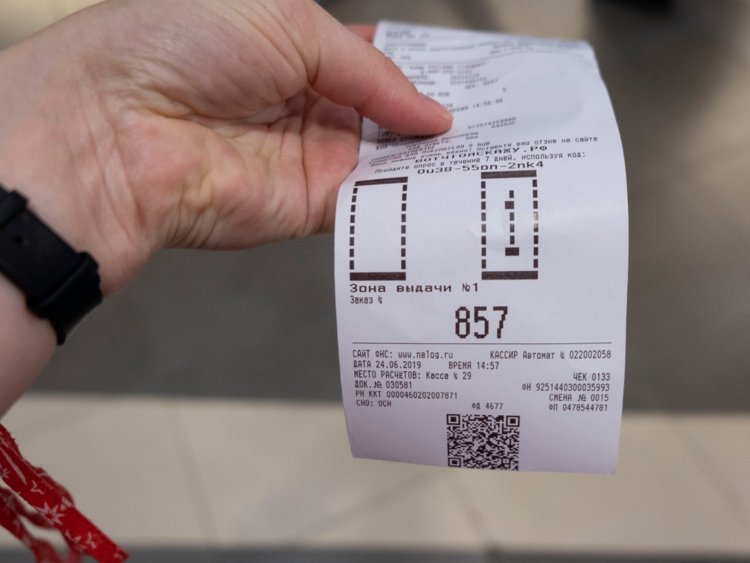 I went to look for the pick-up spot.

I spotted a screen toward the end of the counter that was displaying order numbers. 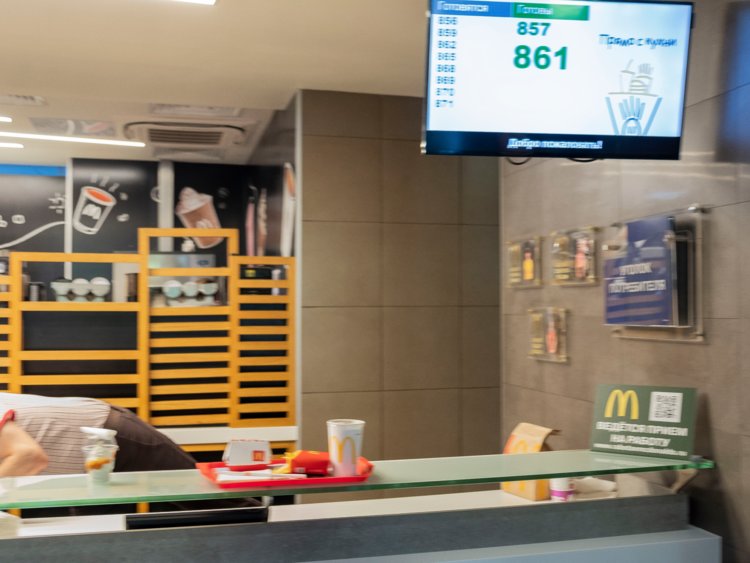 I walked up to the counter and saw that my order was ready before my number was even displayed — less than a minute after I’d paid for it.

I was impressed by the speed and efficiency of the whole process, as I’m used to a more hectic scene in American McDonald’s locations. The contrast was even more clear after I visited the McDonald’s by my office, where there are no ordering kiosks and an employee had to direct the customers to the next available cashier.

I headed up to the second level of the restaurant, where there were plenty of seats to choose from. 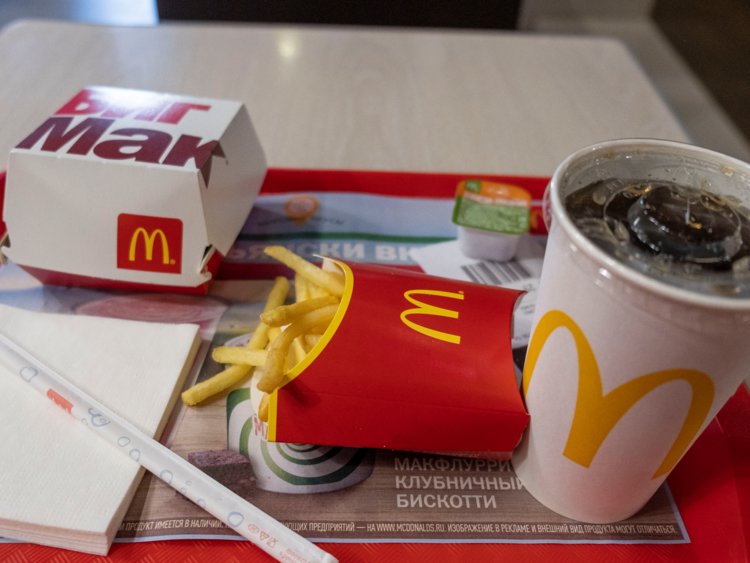 The first thing I ate was a French fry, which was piping hot and perfectly salty.

I wasn’t too impressed by the look of the Big Mac when I first opened it. 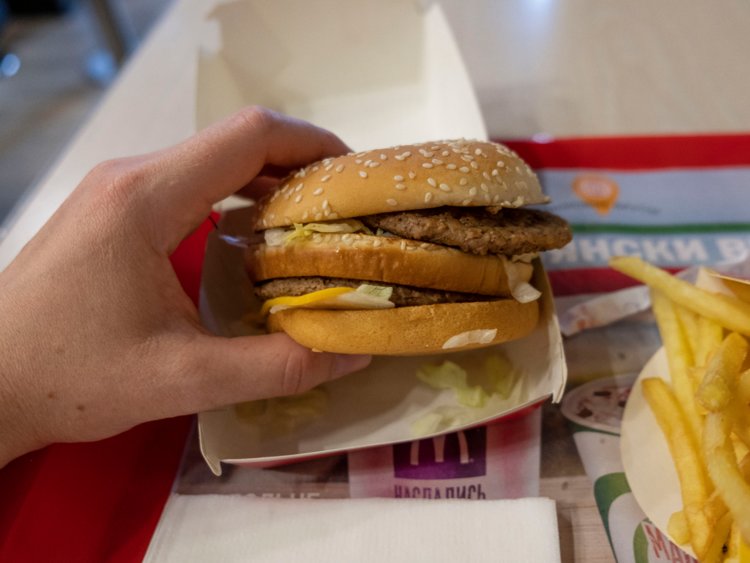 But upon biting into it, I was pleasantly surprised to find that it was hot, flavorful, and more fresh-tasting than a typical Big Mac. At McDonald’s locations in the US, I enjoy the fries, but I usually find the burgers to be a bit tasteless.

Like in the US, the Moscow McDonald’s offered free WiFi. 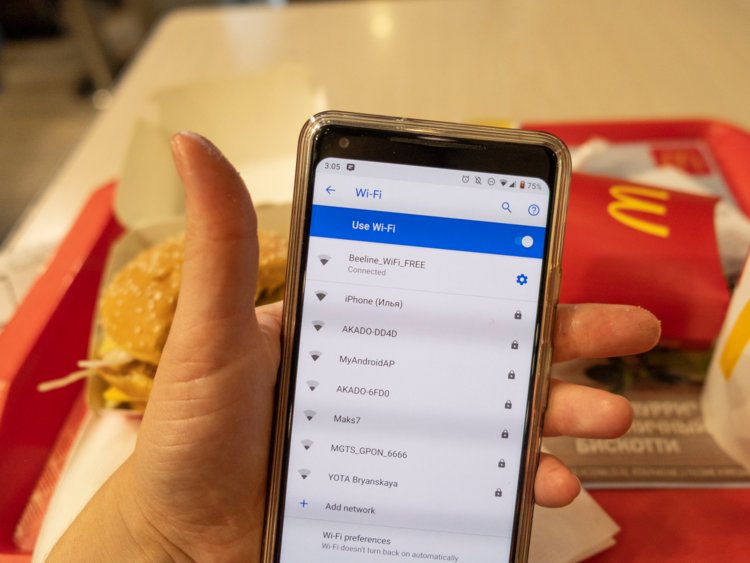 In Russia, you connect to WiFi by requesting a code, which is texted to your phone and which you then have to enter to use the network.

As I was eating, I looked around and was again struck by how clean the McDonald’s was, despite the high number of customers. 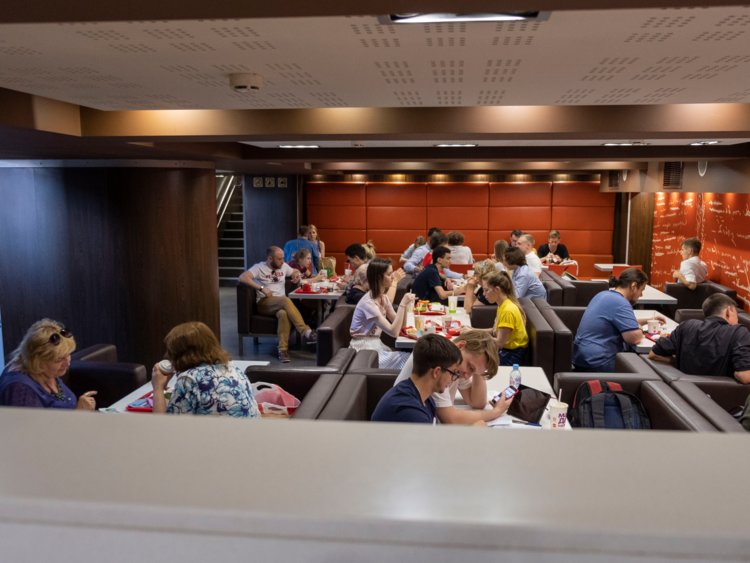 In many US McDonald’s locations I’ve been to, especially the larger ones, you often have to move aside discarded trays with food remains and wipe up smears of Ketchup before sitting down at a table.

But in Moscow, I saw an employee come over and clear away a man’s tray mere seconds after he’d finished eating.

I didn’t take a photo in the bathrooms, but I will say that, too, they were noticeably clean and didn’t require a code to enter like in some American locations do.

Attached to the McDonald’s was a McCafé with its own separate entrance. 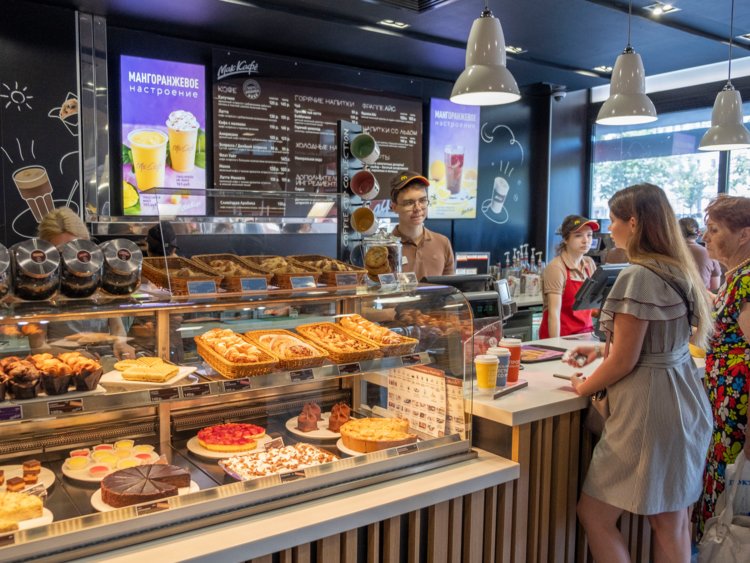 It was a hot day, and many people were buying ice cream. The café also sells coffee drinks and baked goods.

Outside, Moscow’s first McDonald’s has a spacious seating area. 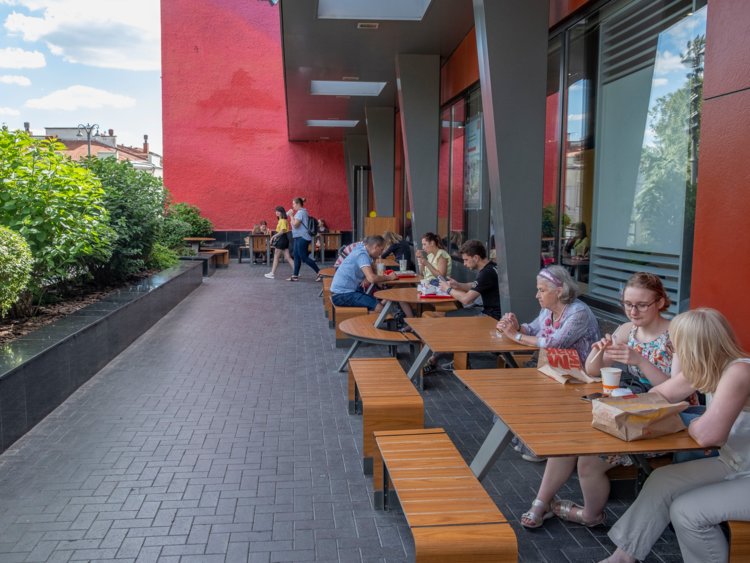 It, too, was clean and well-maintained.

The outdoor seating area overlooks a beautiful little park across the street with trees, flowers, and a fountain. 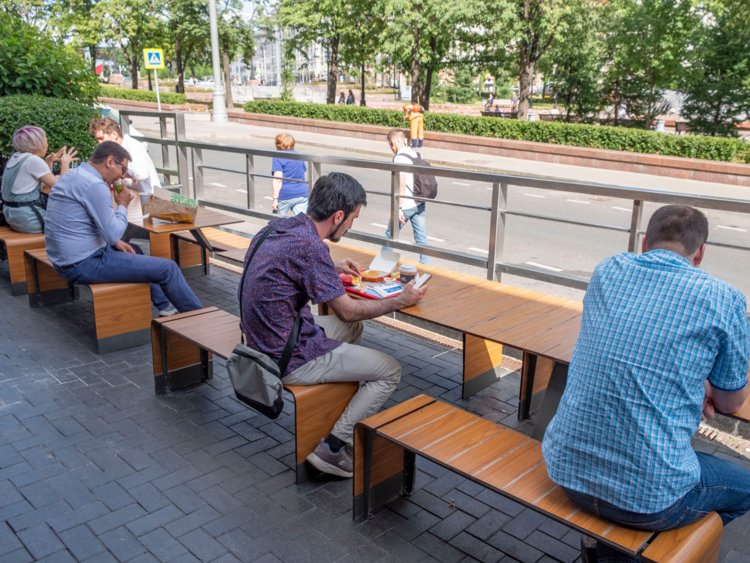 From this McDonald’s, it’s abouta 30-minute walk or a 15-minute metro ride to Red Square.

In the US, I tend to avoid eating at McDonald’s because it’s usually a bit hectic, not too clean, and I don’t find the food particularly tasty. 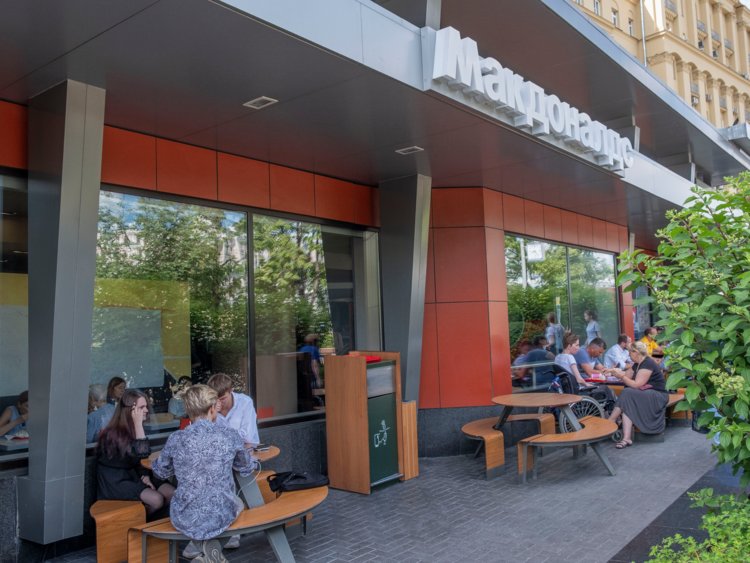 But in Moscow, the food, the ordering process, and the space in general were all at a higher level than I’m used to at American McDonald’s. In short, I would definitely eat there again.

SEE ALSO:McDonald's just claimed a crucial victory over burger rivals like Wendy's for the first time in years

DON'T MISS:I walked down Moscow's glitzy, mile-long shopping street that travel guides compare to the Champs-Élysées in Paris and NYC's Fifth Ave — and it fell totally short of the hype