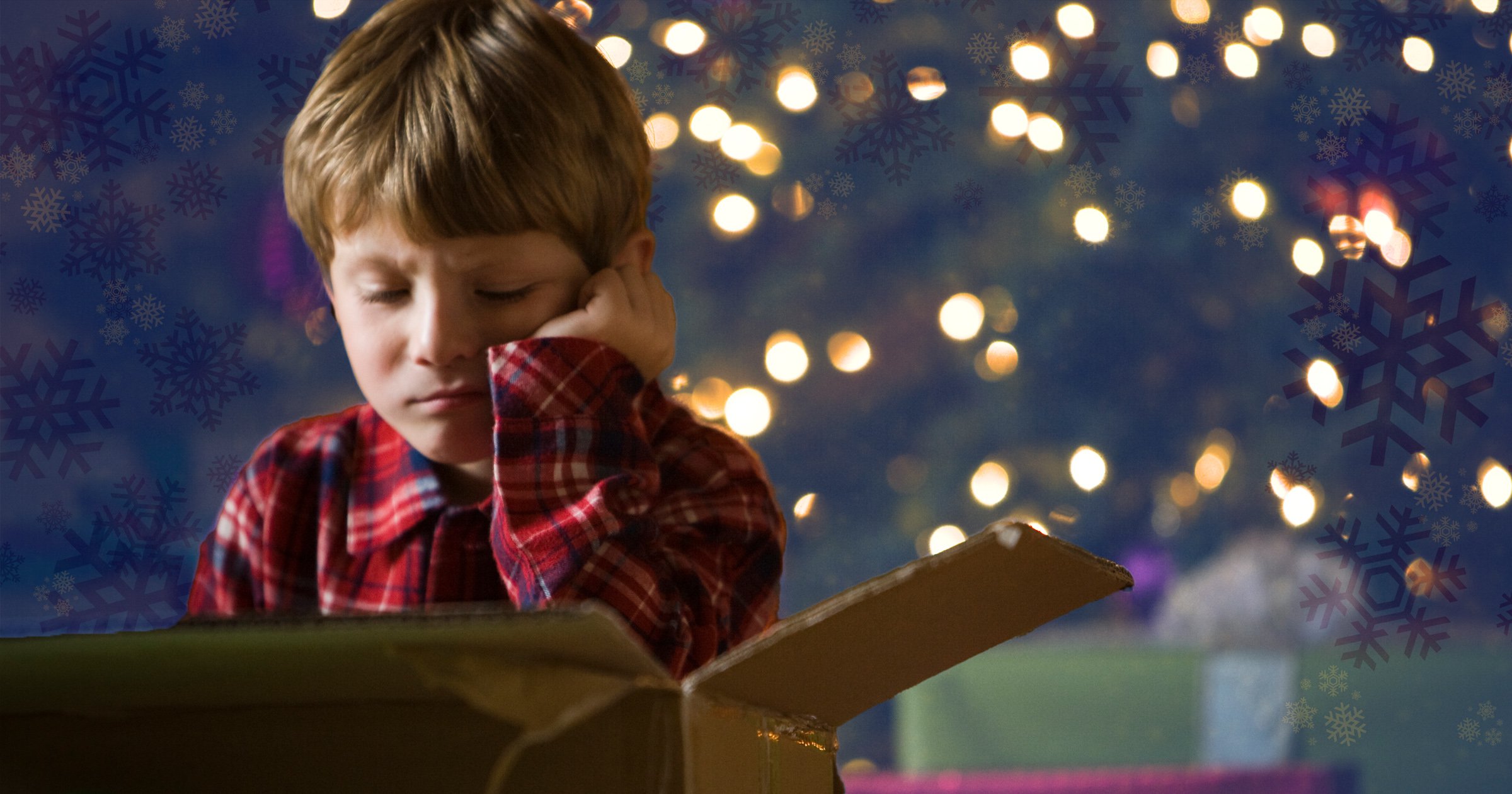 There were around 76,640 foster careers opening their homes to children in the UK last year.

While many of these households offer a safe, loving home for children when they need it most, sadly, not all experiences are positive.

Jasmine, 26, was in care from when she was nine until she was 18, and has troubling memories of Christmases spent in the system.

She was just nine-years-old when she spent Christmas with a household who didn’t have it in their hearts to treat her like a member of the family.

‘By the time Christmas came around, I’d been in my first foster placement for several months,’ Jasmine, who now lives in London, recalls. ‘There was never any thought given to whether I’d be included with the rest of their family or what to expect for Christmas.

‘On Christmas Eve, the foster family went to church and told me to stay at home to clean and get the house ready.

‘When it came to Christmas presents, the differences continued to show. Whilst my foster parent’s children opened their presents, I was told that I had a budget and could only choose one thing.’

This treatment didn’t end until Jasmine ran away from this foster home and was placed in a new, more compassionate one.

She says: ‘It was only then that I realised that the past years were not the Christmases I was supposed to have. My new foster parents welcomed me and treated me like another member of the family. I was happy.

‘At the time, I was too young to understand why I was treated differently. Now, I can see that no child in care should have to go through what I did.’

Sadly, her traumatic experience has affected how Jasmine views the festive season.

‘I often feel like Christmas is just another day. It’s just a celebration about spending more money,’ she says.

Even though Jasmine spent happy times in her new foster home, things became tricky when she aged out of the system.

‘Once you’ve left home as a young care leaver,’ she explains, ‘it can feel like you’re not thought of as a real member of the foster family who you grew up with.

‘One year my foster mother’s son didn’t want me there, so I spent Christmas alone in my flat. My Christmas dinner was delivered to me by a family friend for me to reheat.

‘This year I am not sure what I will do.’

You get moved around so much that it’s hard to make your own traditions.

Those who have experience Christmas in care also say they get moved around so much, that it’s hard to make your own traditions.

Sharon* describes herself as ‘lucky’ because the staff in her supported living accommodation made an effort to keep things festive over the holidays.

‘They made us a Christmas meal, and we decorated the place and had a tree up,’ she recalls. ‘They even gave us all cards, which really made a difference towards helping us feel at home.

‘Being away from your family is hard, and you wonder what they are doing this Christmas without you. Being in care, you get moved around so much that it’s hard to make your own traditions – because how can you when you’re worrying whether you will still be there next year?

‘I am thankful that I had that experience during my first Christmas. I got put into care as a teen, so my first Christmas was a lot easier to process than it would be for some, as due to my age, I was given the independence to see my friends and family.’

Katharine Sacks-Jones, CEO of Become, a charity for children in care and young care leavers, says: ‘While some young people in the care system will have a positive experience at Christmas, we know from the young people we work with that, for far too many, Christmas is a lonely and isolating time. It’s a shocking indictment that this has been, and continues to be, the reality for so many children and young people.’

‘Christmas comes around every year,’ says Sharon, ‘and you can’t skip it, so to have had a bad experience, could really have ruined it for me.

‘I don’t think anyone should have to go through that.’

Jenni, who works for a communications company, was in care from the ages of 14 to 19, and she finds the topic of Christmas still makes her anxious now.

‘I remember feeling like an inconvenience at Christmas,’ says Jenni. ‘Like an awkward observer of what were supposed to be meaningful family moments.

‘I felt great guilt for not being by my mother’s side, but also feeling abandoned by her for sending me away right before Christmas.

‘The uncertainty of where or how my mother will be hasn’t ended,’ she explains, ‘and I don’t like to intrude on other people’s celebrations.

‘I attempt to justify my presence by finding special gifts, but I can never quite afford what I believe the price of including me is.

Questions such as “What are your plans for Christmas”? and “Will you go home to family?” make me uncomfortable.’

Katharine points out that there’s currently a record number of kids in care in England – over 82,000.

That means tens of thousands of Christmases like the ones Jenni, Sharon and Jasmine experienced, as children and teens will be taking place this year.

She adds: ‘[These children] deserve to feel loved and cherished at this time of year, and all year round, just as other children do. Sadly, this is too often not the case and with a children’s social care system at breaking point, things are getting worse for many kids.

‘The reality is there are just not enough suitable and safe places for children to live, meaning many are placed in inappropriate and unsafe settings like B&Bs, and many are moved miles away from the connections that are important to them – away from their friends, their siblings, their schools.’

If they’re not taken out of the system before they reach legal adulthood, these children will also have the care cliff to contend with.

My coping mechanism at that time was to stop taking my insulin.

Katharine explains: ‘When young people turn 18, they face a care cliff when they are expected to leave care overnight, often well before they are ready.

‘This leads to many young people being left isolated and alone, without people around them to rely on at times like Christmas.’

Jenni recalls one particularly harrowing Christmas she spent living in temporary accommodation while she was at university studying Cognitive and Clinical Neuroscience.

She says: ‘My radiators weren’t functioning, so I layered up in as many pieces of clothing as possible to keep warm.

‘It was so cold that I could see my own breath. Unfortunately, the lock on my door was also broken at that time, so I would lay in bed staring at the door hoping that no one would decide to break in.’

The sound of people shouting and the smell of drugs and urine provided the backdrop to Jenni’s festive season there that year.

She also had no Wi-Fi, so was unable to reach out to anyone she knew for comfort.

‘My coping mechanism at that time was to stop taking my insulin,’ she says. ‘Admission to the hospital would mean a warm and safe space.

‘I had never been so lonely or starved of love and compassion.’

Jasmine says she’s spent around seven Christmases without her foster family now, and a couple of those Christmases have been totally by herself, but she still makes it a special occasion for herself.

‘Even though it can feel lonely,’ she says, ‘I tend to prep talk myself, and it’s not too bad in the end. I have recently changed my diet to 90% vegan by choice, so however it pans out, I am looking forward to cooking myself a different Christmas meal than usual.

‘I always have a tree up and decorate the flat.

‘In future, I’d like to either travel somewhere or support people who face any challenges during Christmas financially where possible.’

These days, though Jenni’s Christmases may still make her nervous, they’re a far cry from what she went through as a child and young adult.

In future, she also wants to be able to help others who are on their own at this time of year, or travel and make brand-new memories.

This year, she’ll be spending it with her partner and his family, and an invitation has been extended to her mother.

She says: ‘My partner has very much attempted to undo the negative associations I have built with celebrations such as Christmas and birthdays, and things have changed.

‘I now feel considered by someone and not just because I am a legal responsibility.’

*Name has been changed.

To Donate to Become’s Christmas Appeal to help children in care this Christmas, please click here.