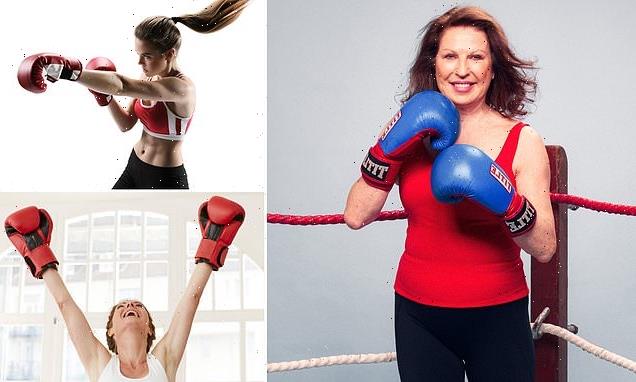 How I boxed away the break-up blues: It gave our columnist her va-va-voom back after a painful split. Now AMANDA PLATELL never misses a chance to pack a punch

At last, GPs have come up with a genuinely useful solution to treat women suffering from depression and even diabetes. No, not the usual cocktail of more drugs and restrictive diets, but boxing lessons.

Classes will be ‘prescribed’ on the NHS to help us with our physical and emotional wobbly bits — those problems which have been exacerbated by the pandemic.

Trust me, this is a health initiative that will be a lifeline for middle-aged women everywhere. Forget Pelotons or Pilates: no exercise regime can possibly be as motivating or as satisfying as punching something.

Whether it’s coping with break-ups or breakdowns — which, as we women know to our sorrow, often tend to go hand in hand — I’ve found there is one genuine remedy: venting your frustrations and despair by pummelling either a punch bag or a sparring partner. 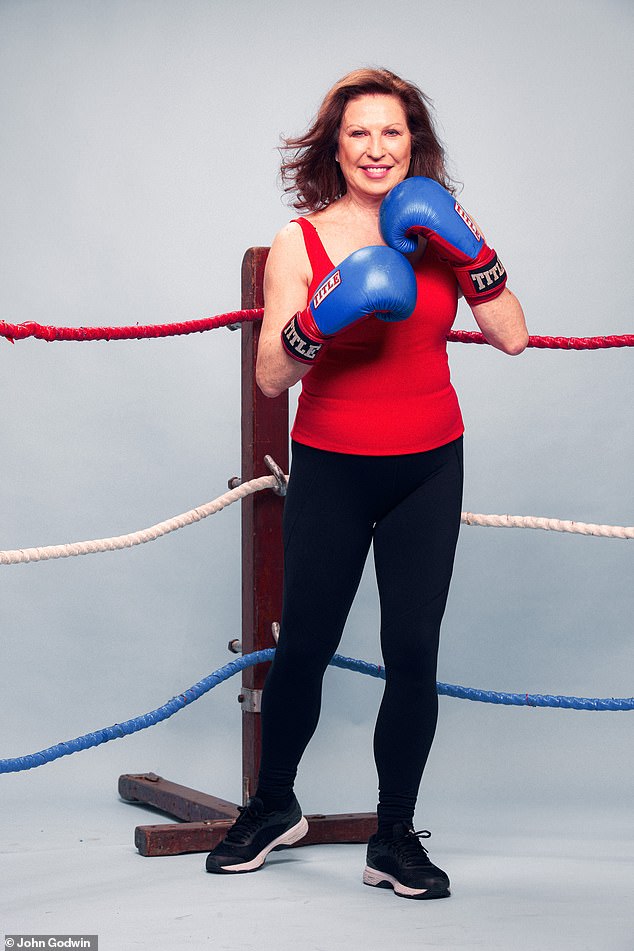 Amanda Platell (pictured) who took up boxing more than 15 years ago after a painful break-up of a long-term relationship, claims no other exercise regime can be as satisfying as punching something

I first took up boxing more than 15 years ago with my friend, Ronnie, a personal trainer, in our very sweaty local gym, after the complicated and painful break-up of a long-term relationship.

‘Just imagine you’re punching his face,’ Ronnie suggested, and I did. And it felt good. I’d go so far as to say that the pure joy of hitting out when you feel powerless is something of an aphrodisiac. Boxing gave me my va-va-voom back, at a moment when I felt at my lowest.

When the gym closed during the first lockdown in March 2020, Ronnie and I agreed that, come rain or shine, we would spar together outdoors on Hampstead Heath in London.

This is another brilliant thing about boxing: you don’t need a gym. You can do the exercises anywhere, even as a beginner. We stuck to our promise and have put ourselves through our paces three times a week ever since. The most challenging day came during New Year when, after the wind chill was factored in, it was minus 6c. The ground was icy, sleet struck our faces — yet still I packed up my boxing gloves and set out.

A boring old jog would never have tempted me out in such conditions, but the sheer exhilaration and brutality of boxing reaches the parts of a woman’s brain that no other exercise does.

When we box, those energising endorphins go rushing around our nervous system straight to our brains. They block out pain receptors and leave us with feelings of pleasure and wellbeing akin, according to the experts, to a hit of morphine.

Nothing can compare with the exhilaration of imagining you are whacking your tormentor (just imagining, of course!). But then I suspect pugilistic DNA is in my blood. My great-grandfather had to speedily exit his Irish homeland for Australia, working his passage on a ship, after being caught winning a bare-knuckle boxing match — then an illegal sport.

As a teenager, I recall my dad, who never once raised a hand in anger, taking me into the garden and introducing me to the art of hitting back, in case any boy got too frisky. 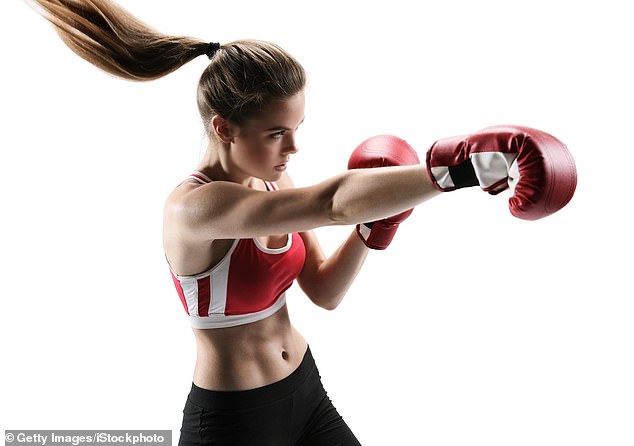 Now 64, Amanda revealed punching strengthens the muscles all along your arms and shoulders therefore ensuring that she has no bingo wings (file image)

‘Left foot forward, Mandy, left hand raised to your face to protect it, right foot back taking your weight, one punch in the face with your right with all your might, then run like hell.’

My predispositions aside, there is no doubt boxing has transformed my life. Apart from giving you a punch-drunk high and soaring confidence, it also transforms your body. You might not fancy being a fighter, but you’ll love the results of the exercise.

I’m now 64, but I’m happy to report there are no bingo wings flapping here, as punching strengthens the muscles all along your arms and shoulders. And there’s no need for a mid-life boob job either, as repeated right and left hooks firm up the pectoral muscles that hold your breasts aloft.

Boxing also strengthens your core and your back to such an extent that I had to have my bra size remeasured. Although I confess I did feel rather deflated when one boyfriend said the thing he most loved about my body was my strong back!

Boxing, especially when it includes kickboxing and about 50 squats while holding a kettlebell as part of the training, does great things to your legs, too. Firmer calves, sculpted thighs, even a perkier bottom.

As one sisterly friend said recently, if she saw me walking away from her down the street without her glasses on, from behind I have the legs of a fit 50-year-old. And Ronnie rather unkindly reminded me recently that there’s even a six-pack hiding away there under my rosé belly.

The mental benefits are equally as profound. A childhood friend was recently dumped by her husband for a younger model after 22 years of marriage. In one of her more despairing calls, she pleaded for advice on how to ease the pain. Boxing, I said. You’ve gotta punch that guy right out of your life. Working out with a punchbag and a sparring partner, she’s lost a stone in two months and dropped two dress sizes.

My own weight loss wasn’t so dramatic when I first started as I’d already lost a stone during my break-up, but I shed another stone, which hasn’t returned, and I’m far more toned. All this makes boxing perfect for any age or gender, but there are specific reasons why it is a dream exercise for older women. 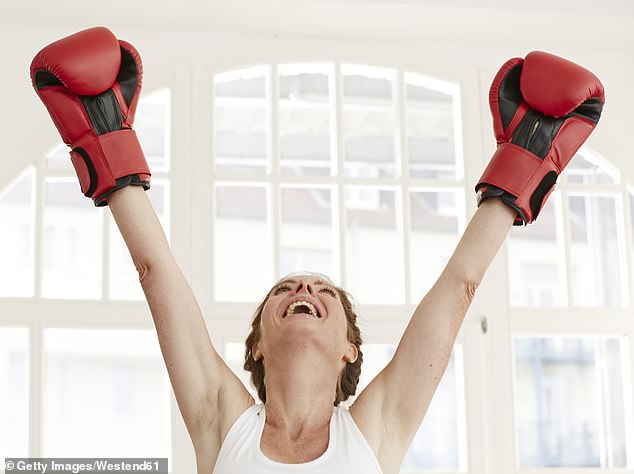 All that pummelling increases your bone density, staving off osteoporosis — a must for any woman over 40.

And constantly crouching and squatting provides the perfect opportunity to simultaneously do your pelvic floor exercises, which don’t just improve your sex life, but could also put off the day when you have to sneak into Boots wearing dark glasses to ask where the Tena pants aisle might be (for your ageing mother, of course).

I’m certainly not alone in my boxing habit. At ‘boxing for fitness’ and ‘boxing-inspired’ classes that don’t involve combat in the ring, such as Boxercise or London boutique gym class Kobox, the balance has tipped in favour of female fighters. More than 63,000 of Kobox’s 85,000 members are women — who say that, as well as boosting their confidence, it’s improved their core strength.

I was surprised, though, that when we talked about it in a post-boxing session at my local pub, the men mostly thought the whole idea of free boxing classes for women on the NHS was utterly stupid.

‘A total waste of my money,’ one told me. Others said ‘women don’t have it in them — it’s a man’s sport’ or that ‘women are not strong enough’ and ‘they’re not naturally aggressive’.

Their comments revealed almost Victorian ideas about women — that boxing is not feminine and should remain a man’s domain.

And yes, perhaps it is contrary to how some men still think about women: that sweating and punching and getting yourself strong is somehow unfeminine.

All our lives, women of my generation have been told to not cause a fuss and, like men, maintain a stiff upper lip, even if it is quivering.

But let me tell you that it’s time for a strong upper cut. Give it a go and I promise you’ll find it exhilarating, even liberating.

Because I know that after a long period of deep despair and even depression, I managed to box my way back to happiness.

…AND HERE’S WHY NHS DOCTORS AGREE WITH AMANDA

HOW BOXING HITS EVERY HEALTH TARGET

Engaging every muscle from biceps to brain, boxing is an all-consuming endeavour.

‘Boxing is one of the best forms of exercise around,’ says London GP Dr Mohammed Abbas Khaki. Punching boosts upper body strength, crouching works the core and legs, while constantly dodging and anticipating what’s coming next improves both mental and physical agility.

As for mental health, ‘chemicals such as serotonin and dopamine released during boxing help to improve your mood and feeling of well-being’, says Dr Khaki. ‘This contributes to what is known as boxers’ high — a euphoric energised feeling after a session.’

There’s nothing like punching a heavy bag to get rid of your frustrations, says Dr Mike Loosemore, chief medical officer for GB Boxing: ‘The criticism of boxing is that it celebrates violence, but, in fact, it allows people to express those feelings in a controlled way.’

Channelling aggression or disappointment into a discipline like boxing helps us cope with our primal feelings and makes us feel strong, physically and mentally.

REASON THE SPORT IS SO APPEALING TO WOMEN

women’s boxing is one of the fastest-growing sports in the UK. The mental and physical rewards are similar whatever your gender, but there’s a particular sense of safety that boxing can provide for women.

‘A lot of the [boxing] gyms are like families, with husband-and-wife owners and a real sense of community,’ says Dr Loosemore.

‘Like all the martial arts, boxing also gives women the confidence from a self-defence perspective, that if you are in a really tight spot, you can defend yourself.’ Visit your local boxing gym to see if you like the atmosphere. All approved clubs are listed on englandboxing.org, boxingscotland.org or welsh boxing.org.

If you prefer a non-combat version, look for classes such as Boxercise or Kobox.

KICK OFF THE DAY WITH SOME NIFTY MOVES

Hone your moves using instructional videos on YouTube. Start your day with some skipping, or practise these punches, says Kobox trainer Paige Holbard.

JAB: Keep your guard up (fists by your chin). Keep your chin down and punch straight with your lead (non-dominant) arm, rotating your fist 90 degrees to hit horizontally on impact. Throw quick and snappy and return instantly to the guard position.

CROSS: Keep your guard up and fully extend your rear (dominant) arm, distributing your weight from back to front and rotating as you punch.

HOOK: Keep your guard up and bend your arm at a 90 degree angle. Turn your body and swing into the punch, pivoting your lead foot, bending your knees and following through with all the power of your body.