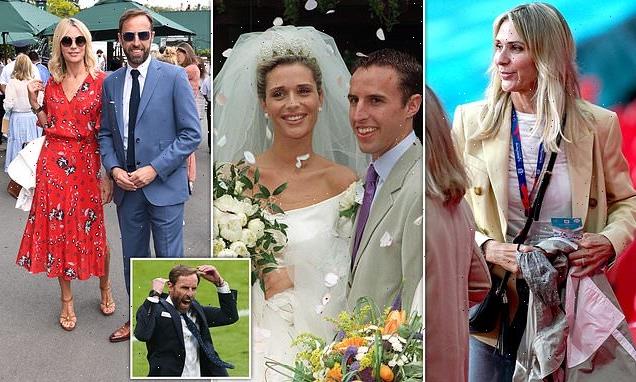 England’s secret weapon: How Gareth Southgate’s devoted wife – a former shop assistant he was once too shy to ask out – is guiding him through his Euros campaign… despite being kept APART by Covid rules

As Gareth Southgate celebrated England’s triumphant win over Germany last night, there was sure to be one woman, who has played a secret but significant part in the team’s success, on his mind.

The England boss, 49, has been married to his wife of two decades Alison, 53, whose off-pitch support the manager has credited with keeping him grounded.

The blonde former sales assistant is a constant supportive presence, but shuns the flashy WAG lifestyle and largely remains out of the spotlight to focus on their two children Mia, 21, and Flynn, 17.

Gareth has spoken openly about how time with his wife and their two children helps to keep him sane away from the pitch and his own experience has long inspired his ‘family first’ strategy with the team.

But this tournament is unlike any other: and, despite being separated from her husband as he stays within the secure England Covid bubble during the Euros, Alison, who is said not to be a fan of football, has been spotted cheering the team on from the stands. 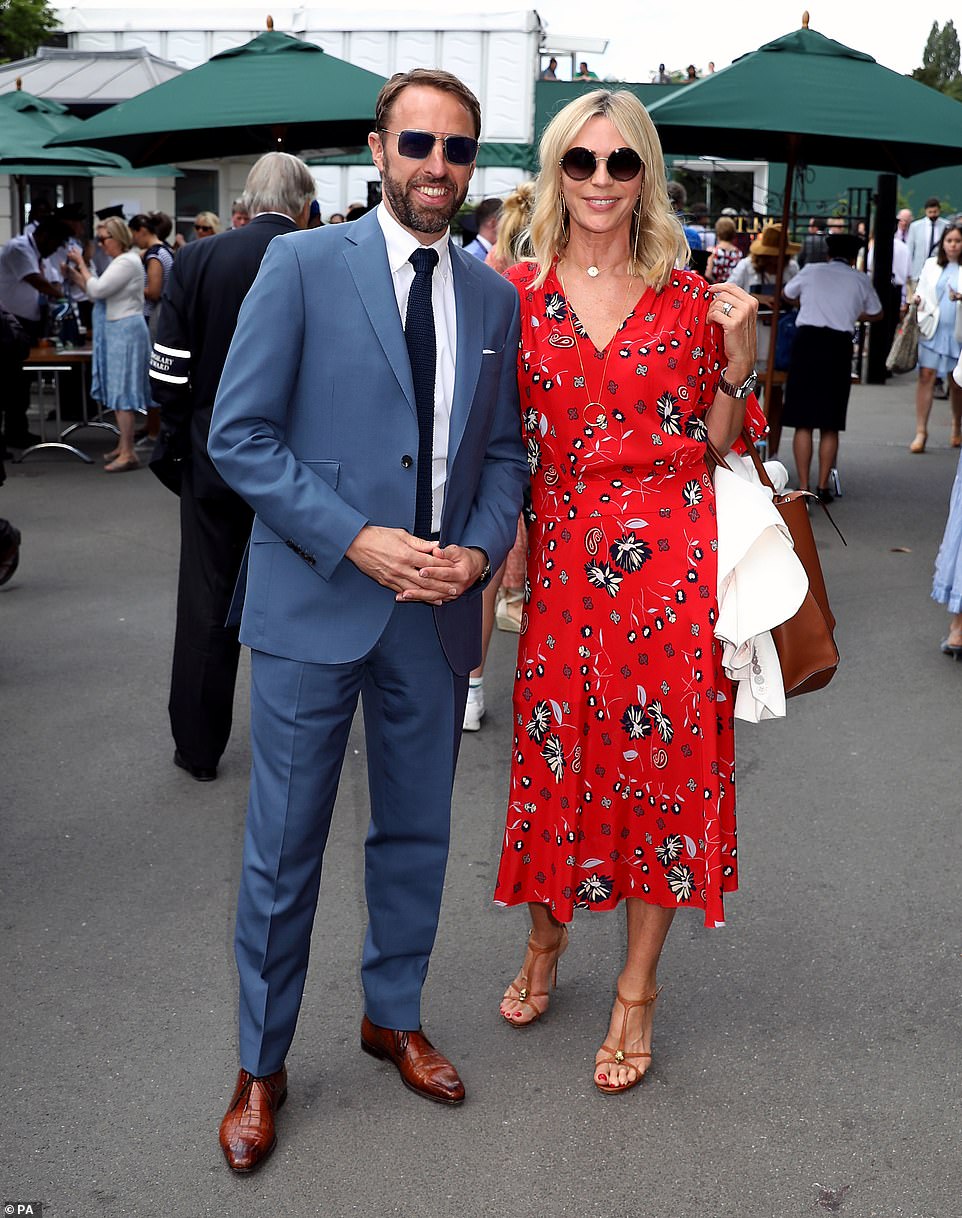 Gareth Southgate, 49, has been married to Alison, 53, for more than 20 years and has credited her off-pitch support with keeping him grounded (Pictured: At Wimbledon in 2019) 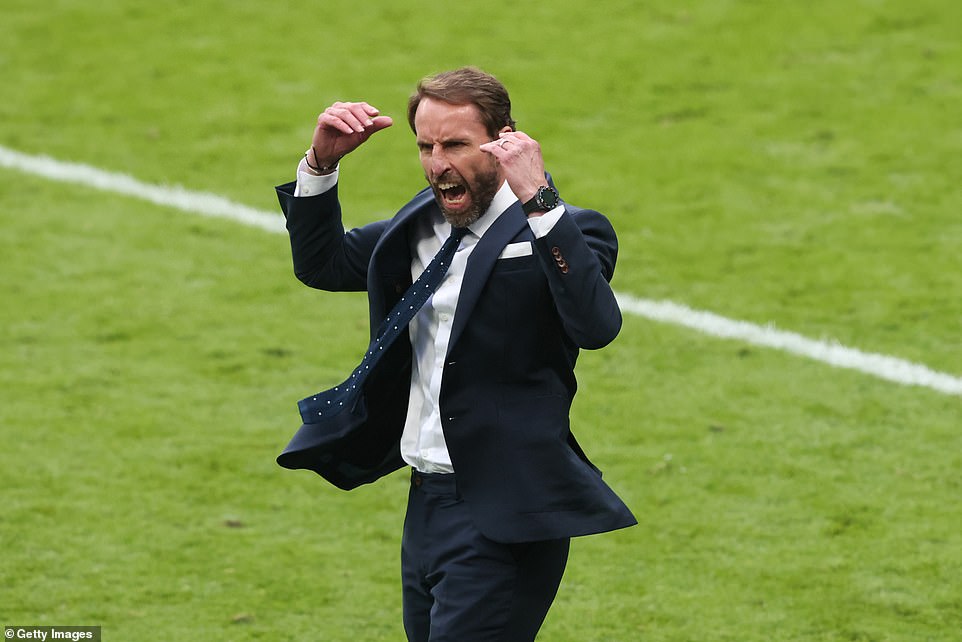 The England manager met his future wife in his early 20s when he was a trainee with Crystal Palace in Croydon and she was a pretty boutique shop assistant. Pictured: Gareth celebrates as England score against Germany in the Euros 2020

The former player was in his early 20s and a trainee at Crystal Palace when he fell for Alison, a pretty boutique assistant almost four years his senior.

He would loiter around her boutique pretending to be browsing clothes, and was helped by the owner of an Italian restaurant in Croydon, which he and Alison frequented, who acted as a go-between.

Having been teased for his prominent nose, he was so unconfident of his looks that it took him about two years to ask her out.

When he finally did, she told him she was living with someone. However, she eventually left her boyfriend for Southgate. 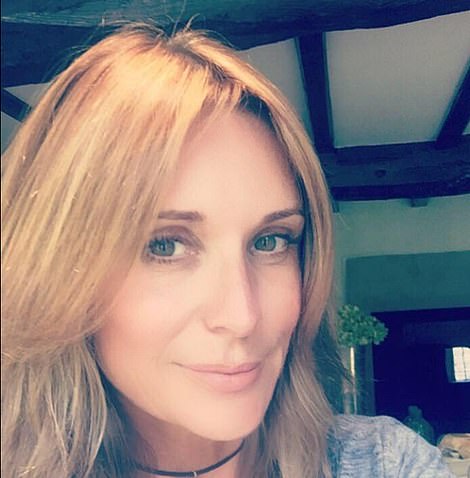 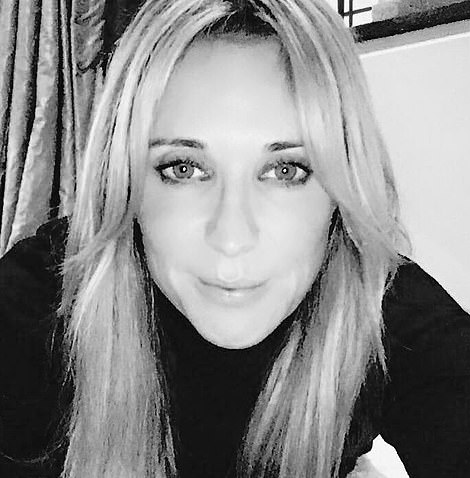 Alison is a constant supportive presence, but shuns the flashy WAG lifestyle and largely remains out of the spotlight to focus on their two children Mia, 21, and Flynn, 17 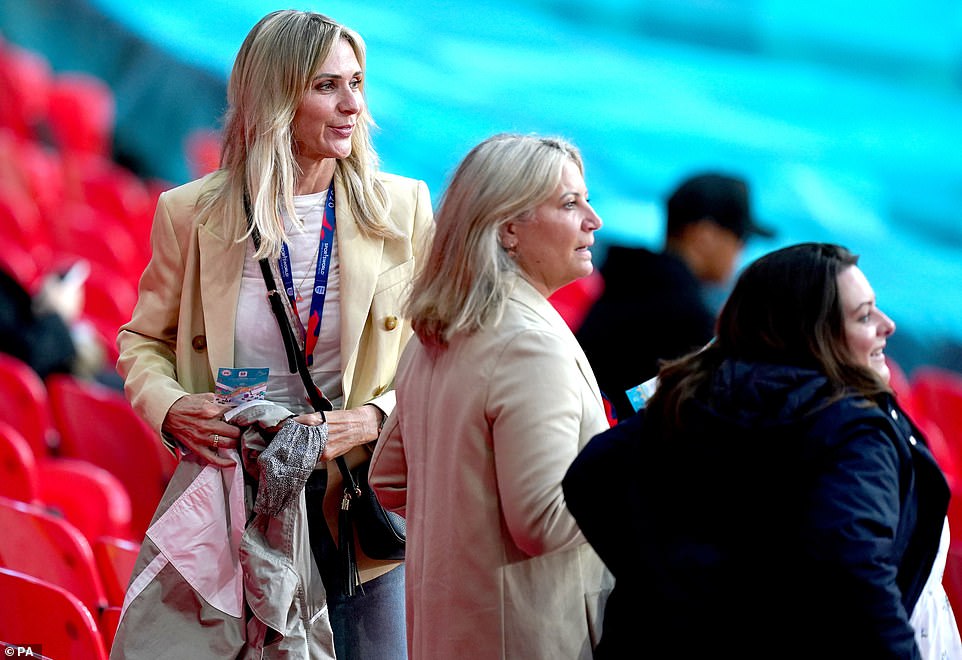 Despite not being a football fan, Alison was seen in the stands ahead of the Euro 2020 match against Scotland

Government guidance states that ‘close contacts’ of Covid cases include people who had face-to-face conversations within one-metre, and anyone who was within two-metres for more than 15 minutes.

Players at Euro 2020 are tested regularly, and those who are positive must self-isolate for 10 days.

Any other players or staff deemed to have been in close contact with someone with Covid during the tournament also have to isolate for 10 days.

The isolation period for close contacts of Covid cases includes the date of their last contact and the next 10 full days, according to government guidance.

For this reason, Mason Mount and Ben Chilwell were forced to isolate after having a ’20 minute chat’ with Chelsea team-mate Billy Gilmour after England’s match with Scotland. Gilmour later tested positive.

Euro 2020 squads were expanded from 23 players to 26 to account for the chance that some teams could be hit by Covid outbreaks.

If multiple players have to isolate, matches will still go ahead providing the team can name 13 players in their squad – a minimum of 12 outfield players plus one goalkeeper.

If a team cannot name 13 players in their squad, the game can be postponed by up to 48 hours.

If the affected team still cannot meet the minimum requirements for a matchday squad, they will forfeit the game and suffer an automatic 3-0 defeat.

Each media day at the England training base, a long serving tradition sees a member of the squad who is up for interview that day play darts against one of the attending reporters.

This has continued during Euro 2020, despite stricter measures in place to minimise contact between England players and the outside world.

In his book, Southgate recalls how he and Alison would meet in a Tesco car park to keep their romance secret from her ex.

However, when he was transferred to Aston Villa, she gave him an ultimatum: either she moved to Birmingham with him or the relationship must end.

His parents, were ‘a little taken aback’ when they announced they were living together because they had only met her once.

They ‘found it hard to believe that a son who had been so methodical, logical and weighed up everything’ would behave so capriciously.

She supported a devastated Gareth as he recovered from England’s 1996 defeat after he missed the crucial penalty in the Wembley.

They married in June 1997, in a low-key ceremony at his parents’ local church, carefully planned between World Cup and European Championship campaigns.

The family home is Swinsty Hall, a magnificent Grade I-listed Elizabethan manor nestled in the wilds of North Yorkshire, that he bought for £3.75 million when he moved to Middlesbrough.

Neighbours remark on the family’s down-to-earth nature and generosity of spirit.

Describing them as ‘lovely people’, one local resident this week recalled how they reacted when carol singers warbled hopefully outside the gates of their mansion at Christmas.

‘They came down to meet us with a torch and invited us up to the house. The Southgates were all there with the kids and another family. They had lit two roaring fires and showed us into their Elizabethan dining room where we all had mulled wine and sang carols together.’

And he’s spoken frequently about how his wife and children help him to stay sane away from the pitch.

Describing, in his 2003 autobiography, how family life helps him overcome football disappointments, he comments: ‘On Saturday evening, our children are not too bothered whether Dad’s team have won or lost.

‘Neither does Alison fret too much about football, and this is how I like it. Regardless of the result, it is up to me to ensure that no one’s evening is ruined because of things that happened on a football field.

‘The agonising waits until Alison and the kids are asleep.’

In 2017, he described how he was unwinding with his family ahead of preparing the England team for the world cup.

‘Over the last couple of weeks I’ve just had a nice time spending it with the family though, and for me that’s important because my kids are 18 and 14, and their development is as important for me as anything else in my life,’ he told the Evening Standard.

‘You do have to try to find a balance because my focus inevitably gets drawn towards making this team as successful as we can and driving them to be the best team in the world, but I’m also a dad and a husband.’

Meanwhile in 2018 Jamie Vardy’s wife Rebekah confirmed that Southgate’s tactic is to allow players time with their loved ones, unlike in previous major tournaments.

‘He’s got the right idea of the team mentality,’ she told The Sun at the time. ‘He’s really relaxed with the players and he makes an effort with all of the families.

‘He really encourages family days after games which relaxes the players, it brings a bit of normality in.’ 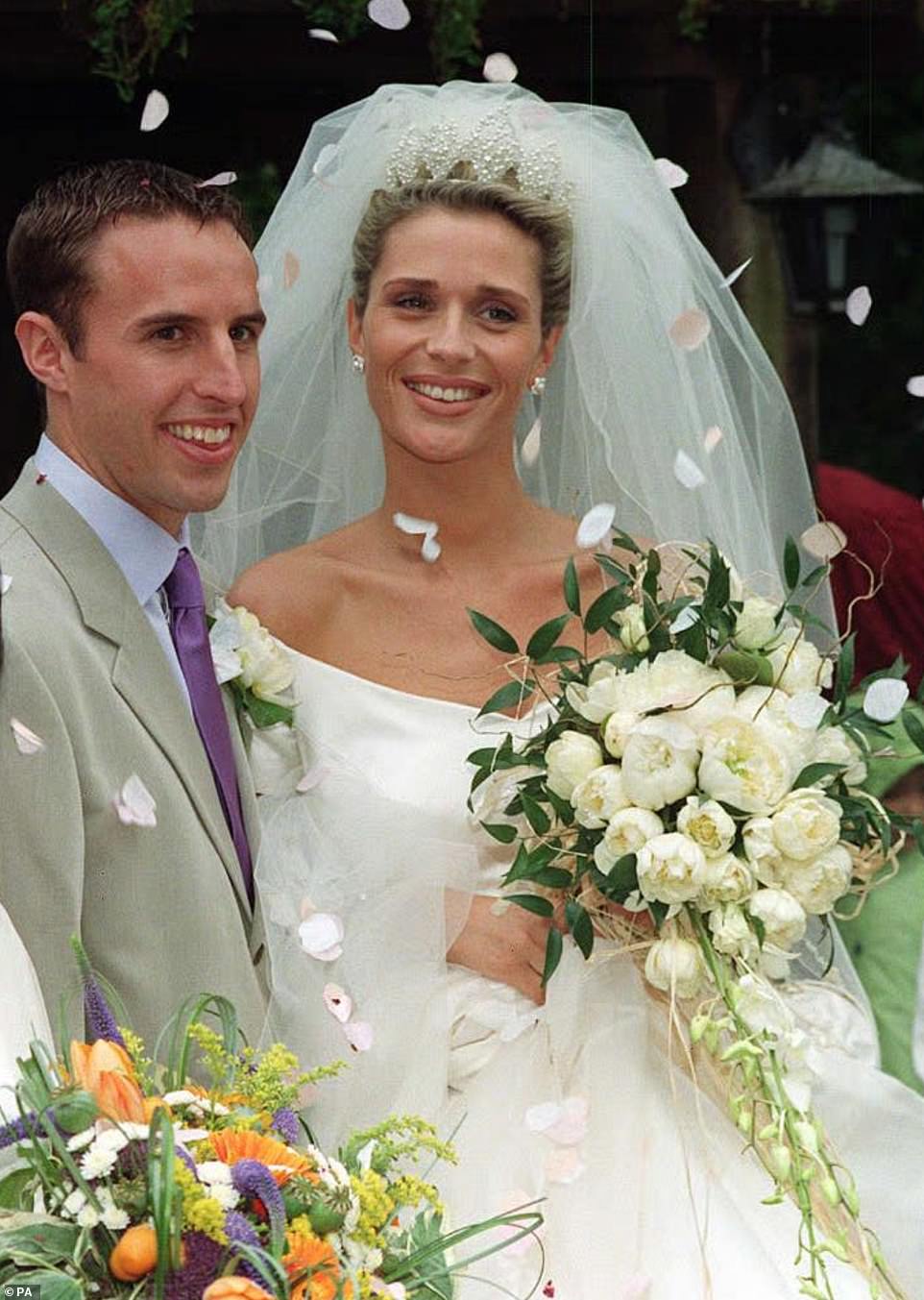 They married in June 1997, in a low-key ceremony at his parents’ local church, St Nicholas in Crawley, that was planned between World Cup and European Championship campaigns

Gareth Southgate revealed nothing can get rid of the pain of his Euro 96 semi-final penalty miss despite him managing England to victory over Germany 25 years later.

The Three Lions beat Joachim Low’s side 2-0 at Wembley to reach the Euro 2020 quarter-finals thanks to late goals from Raheem Sterling and Harry Kane on Tuesday night.

Southgate missed the crucial penalty for England in the Euro 96 last-four in the same stadium four years ago, with the England boss admitting that the sight of his former England team-mates celebrating Tuesday night’s win caused a bit of sadness in him.

The 50-year-old told the BBC: ‘I’m just so pleased. I was looking at the big screen and I saw David Seaman up there. The team-mates that played with me, I can’t change that, so that’s always going to hurt.

‘But what’s lovely is we’ve given people another day to remember and now we’ve got to go and do it in Rome.’

‘Obviously she has to take an interest because it’s Gareth’s job, and she is always very supportive.

‘She will sometimes go to Wembley for an international game — but not during the school term because she always puts the children first.’

According to one family source, she is a committed animal rights campaigner, and is backing calls to end battery-farmed pigs being caged.

Her father-in-law said she and Gareth enjoy socialising with a ‘wide circle of friends’, but neighbours in North Yorkshire have said she seems happiest when wandering the countryside in jeans and boots with her two dogs, a Labrador and a cockapoo.

She is thought to be a vegetarian, she attends regular yoga classes and on Facebook expressed her envy of a friend who was at the Glastonbury Festival.

She also takes holidays with girlfriends — Barbados is a favourite destination — for she has no need to work.

She retains her looks with daily gym workouts and frequent appointments with a beautician.

And while she is unable to unite with her husband while he remains in the Covid, she was spotted in the stands ahead of the team’s match against Scotland last Friday.

The striking blonde could be seen alongside a group of friends as she stood in Wembley, opting to forgo the traditional England shirt for a more lowkey white-tshirt and blazer.

Thousands of elated football fans hurled half-drunk beers into the air and embraced strangers in celebration as England secured a long-awaited victory over Germany tonight.

Raheem Sterling and Harry Kane led the Three Lions to a 2-0 win in a tense clash at Wembley in the UEFA Euro 2020 tournament, with fans across England now daring to dream that victory may be in sight.

Kane swiftly followed up with a neat header – sending his thrilled teammates piling on their captain in celebration as chants of ‘it’s coming home’ filled the stadium.

The elation spilled into fan zones across England – including in Manchester and Birmingham – with Britons proudly draping the St George’s flag over their shoulders when the squad’s first knockout tournament win against Germany in 55 years was secured. 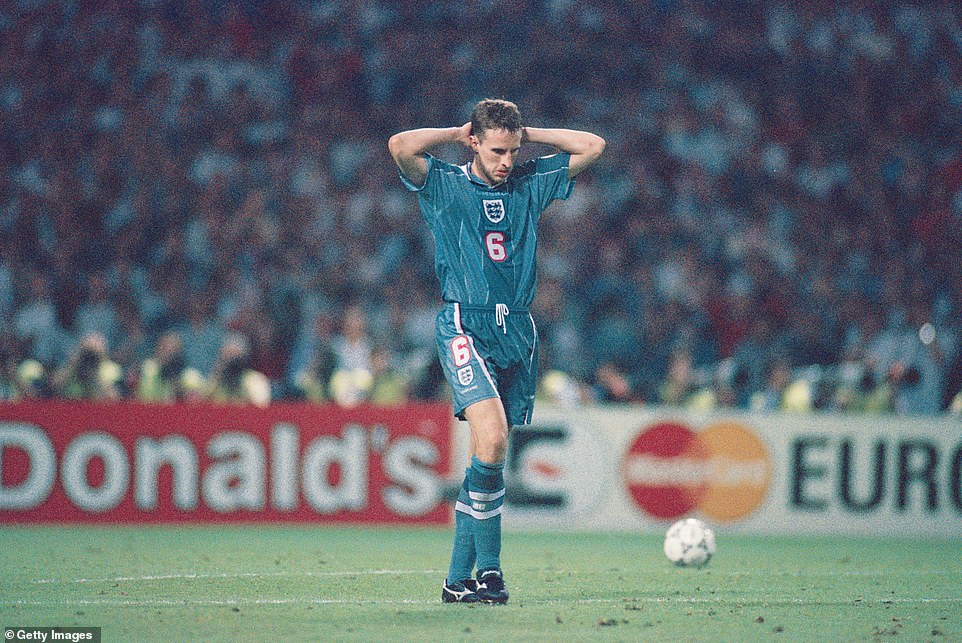 Crowds in Three Lions jerseys later emerged from pubs and tore through the streets of London, Leeds and Newcastle, with hundreds who gathered in Leicester Square and Wembley spraying beers over onlookers and setting off colourful smoke bombs.

As the night continued, several revellers in Leeds were detained by officers and the Metropolitan Police were patrolling en masse in central London in a bid to control the jubilant celebrations.

There were similar scenes in Croydon, south London, where football fans embraced their friends and climbed on tables after Gareth Southgate’s men secured England a place in the Euro 2020 quarter finals. 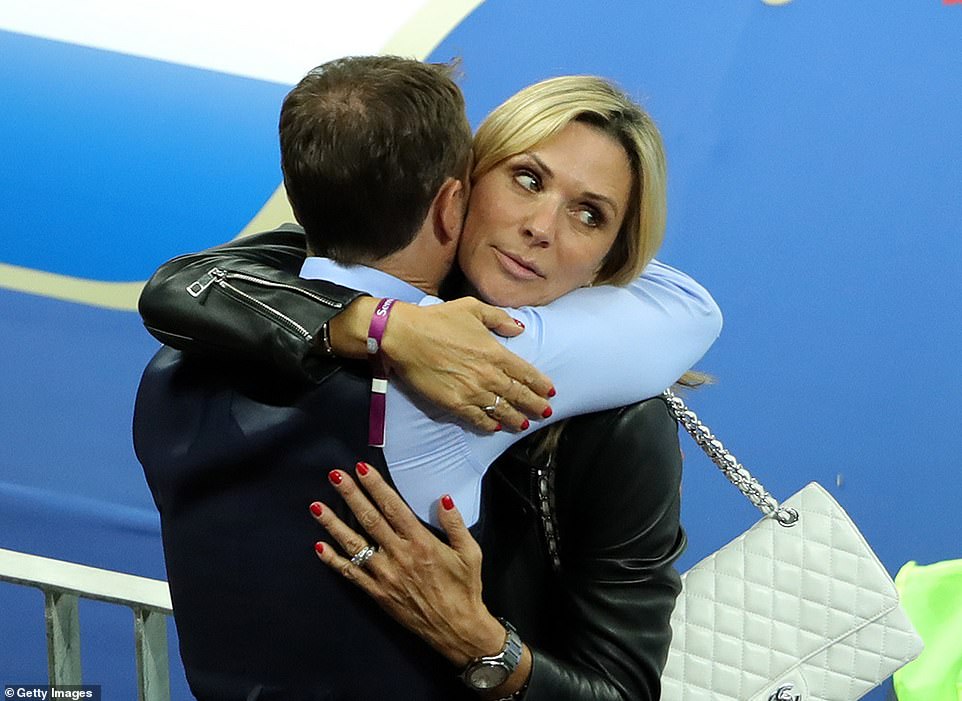 But as excitable fans gathered to watch the nail-biting match, roads were left eerily deserted.

There wasn’t a car in sight on Westminster Bridge, London, or the A14 near Cambridge as the match began at 5pm today – a time that would typically be a bustling rush hour for commuters heading home.

An estimated 25 million fans tuned in to watch the Three Lions storm to a glorious victory on the pitch, including Prime Minister Boris Johnson who was photographed cheering at a TV set up in the Downing Street gardens. 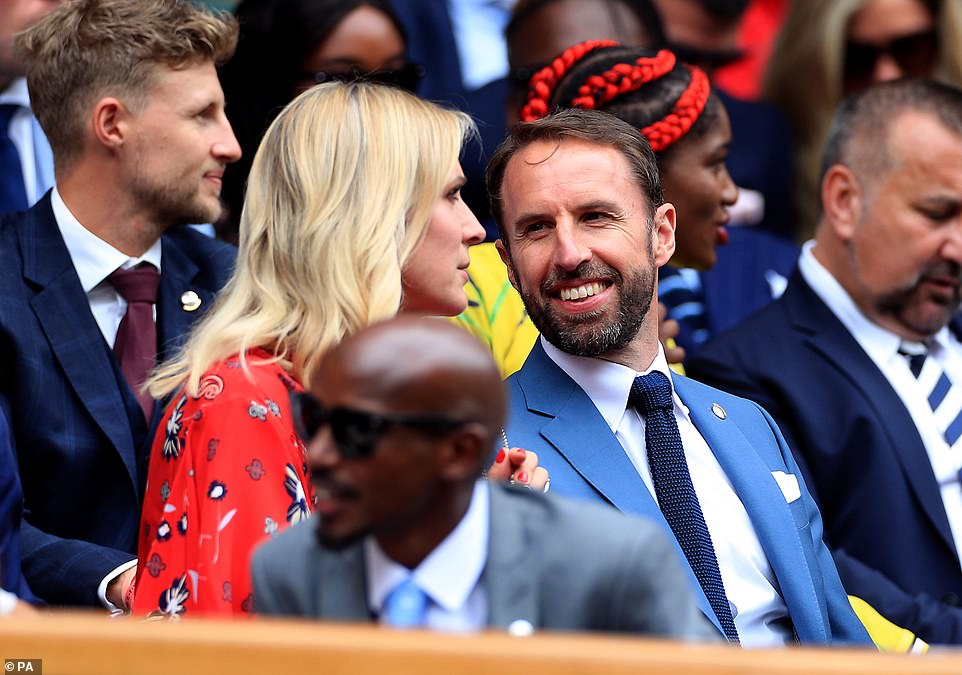