Coronavirus hospitalizations have more than doubled in Texas over the last two weeks, with nearly 8,700 people in hospitals as of Monday.

Officials from Houston to Austin fear their hospitals could hit capacity in about two weeks, CBS News’ Janet Shamlian reports. Hospitals are already overwhelmed in the Rio Grande Valley.

A nurse who fell ill with COVID-19 warns it could happen to anyone.

“Everyone thinks it’s blown out of proportion until you’re the person laying in CCU who has no contact with anybody, and you’re helpless,” said Pattie Peterson, a 29-year-old single mom to two girls who also helps raise her niece.

Peterson tested positive for COVID-19 in late June and has been in a critical care unit since last week. She said she hasn’t seen her girls since last Thursday.

“They FaceTime me every day, crying,” she said. “‘Mommy when are you coming home? Mommy, we miss you.'”

Peterson doesn’t know where or how she got the coronavirus, but described what it’s like: “It feels like someone’s stabbing you in your sides when you try to inhale.”

Officials reported over 12,000 beds remained available in Texas as of Monday, but the numbers varied locally, The Associated Press reports. In San Antonio, Mayor Ron Nirenberg said hospitals are approaching capacity. In Austin, hospitals risk becoming “overwhelmed” in the next 7-10 days, said the city’s Mayor Steve Adler. In Houston, officials said hospitals are exceeding base capacity in intensive care units.

The number of coronavirus cases Texas has seen has nearly doubled in just two weeks, now totaling more than 200,000 cases. By contrast, it took nearly four months for the state to see its first 100,000 cases.

The state could see a significant rise in cases this week as more data comes in from the Fourth of July weekend, according to officials.

“The problem is before that curve really came back down, the state reopened,” said Harris County judge Lina Hidalgo. 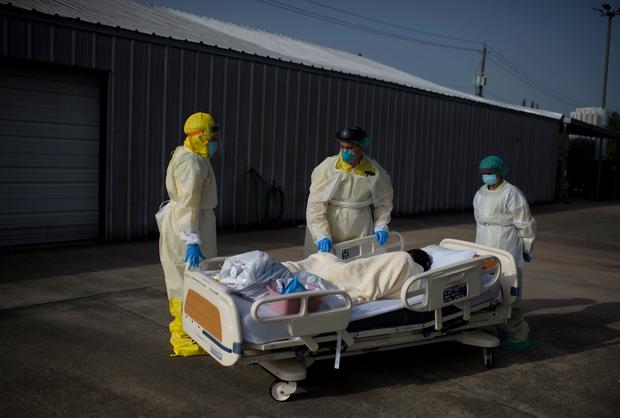 Hidalgo, whose county has seen the most coronavirus cases of any county in Texas, said her plea to the state is: “I need the authority to issue an enforceable stay home order. That is the only way we are going to stop ping-ponging between open and closed.”

Abbott said in a television interview this week he is concerned about more deaths.

“My concern is that we may see greater fatalities going forward as we go into the middle part of July,” Abbott said, the Houston Chronicle reported.