Uh oh. Rishi Sunak had that voice on again. The one that’s all soft and gooey, dripping with syrupy empathy. Back in the bad old days of the pandemic it used to get wheeled out every few weeks and only ever meant one thing: stand by for another costly spending spree.

Sure enough, the Chancellor was back at it again yesterday, tackling the cost of living crisis by spraying £50 notes around the Commons like a Formula One driver armed with a Nebuchadnezzar of the finest fizz.

A £400 rebate on energy bills. Cash handouts to the poorest. The total damage? Oh, just a trifling £21billion. Yup, you heard that right. Let that figure just nestle in your stomach for a bit. Twinges a tad, no? Gets the old gastric acid pumping.

Make no mistake, when our Rishi gets the credit card out he makes one of Rebekah Vardy’s all-day excursions to Bond Street look like a minor splurge.

How were we going to pay for all this? Well, he hoped to raise a bit by walloping oil and gas firms with a windfall tax. Except he couldn’t call it that as he’s been pooh-poohing Labour’s demands for one for weeks. Too much of a U-turn. And Rishi doesn’t like performing U-turns. 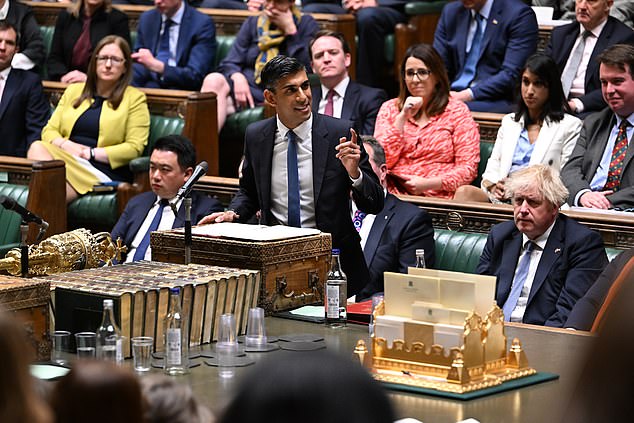 Instead, it was a ‘temporary targeted energy levy’, with heavy incentives for companies to invest. Labour’s front bench howled with laughter. Pensions spokesman Jon Ashworth kept drawing giant ‘U’ shapes in the air. Rishi’s voice was so honey-glazed at first, it was as if he was recording an advert for Unicef.

‘I know that people are worried. I know people are struggling,’ he simpered. ‘This is a Government that never stops trying to help people, to fix problems where we can and to do what is right.’

Cue violins, Giovanni! Next to him sat the Prime Minister, a crumpled mess of a man with his clothes all skewwhiff and his tummy sticking out.

If I didn’t know any better, I would say Mr Johnson had only recently crawled out of bed. On the benches opposite, Labour MPs clucked excitedly like a giant shed of battery hens at feeding time.

After all, it was they who had come up with the ingenious idea of solving the cost of living problem by throwing bags of money at it and now wanted all the credit. Meanwhile, Shadow Chancellor Rachel Reeves swivelled impatiently on the edge of her seat – couldn’t wait to take to her feet and get going on the gloats and the childish ‘I-told-you-so’s’.

Some of her lines were lifted straight from the Tony Blair speech collection.

‘There’s no doubt who’s winning the battle for ideas in Britain,’ she bellowed in that unsettling bass trombone voice of hers, all stomping feet and Boudicca salutes. ‘Where we lead, they follow!’ Labour’s benches cheered. No, they really cheered, giving Reeves a far better reception than they ever give Sir Keir Starmer.

Speaking of Sir Keir, he was there on the front bench chuckling away nervously whenever Reeves made some joke at Sunak’s expense. It’s possible I’m projecting here but I’m not sure he’s totally au fait with economics.

The sheer size of the financial package being laid out before the House meant Labour MPs could only really complain that it should have been announced sooner. Several suggested the announcement had been deliberately delayed until Sue Gray’s report on Partygate had been published. 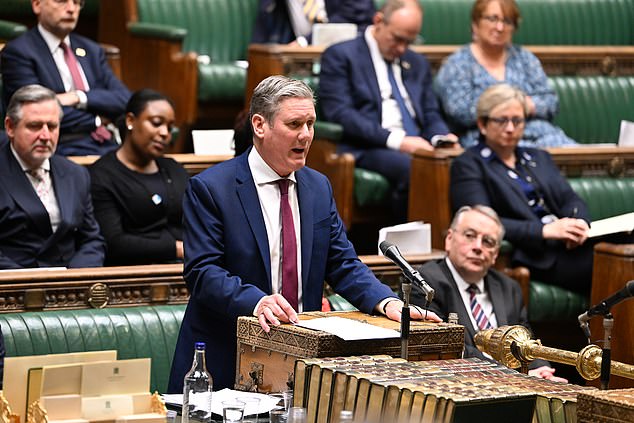 Shadow Chancellor Rachel Reeves swivelled impatiently on the edge of her seat, while Sir Keir Starmer (pictured) was there on the front bench chuckling away nervously whenever Reeves made some joke at Sunak’s expense

Oh come, come. Purely coincidental, I’m sure. Not that it was enough loot for the Scots Nats. It never is. You could hand them half the UK’s gold reserves and they’d still be demanding to remove whatever was left in the Chancellor’s teeth.

Kirsty Blackman (SNP, Aberdeen N) complained today’s extra injection was ‘only £15billion’. The Tory benches exploded. ‘Only??!!’ The sole person to really question Rishi’s plan was Richard Drax (Con, S Dorset). He accused Sunak of ‘throwing red meat to socialists’ by raising taxes on businesses and telling them where to invest their money.

This is ‘not the Conservative way’ he warned. Indeed it isn’t. But this is the world in which we now live. Terrifying, isn’t it?