Commanding the stage! Days after Taylor Swift dropped her second rerecorded album, Red, she has returned to the Saturday Night Live stage to sing her popular “All Too Well” track from the album in its full 10-minute glory.

Everything We Know So Far About Taylor Swift’s ‘Red’ Rerelease

The “Starlight” singer, 31, performed the lengthy track alongside its accompanying short film — costarring Dylan O’Brien and Sadie Sink — during the Saturday, November 13, episode of the NBC variety series, which was hosted by Jonathan Majors. For her musical number, Swift donned a black jumpsuit and red lipstick, which matched her acoustic guitar. The SNL stage also mimicked the seasons that the musician referenced in the song with autumn leaves on the ground and falling snow effects.

Following her NBC appearance, Swift enlisted a slew of her famous pals to help her celebrate the performance, including Selena Gomez, the 19-year-old Stranger Things star, Blake Lively and Ryan Reynolds. The All Too Well director even posed for social media snaps with Gomez, 29, and Sink, before attending the official show afterparty alongside her married friends and Sink.

Two days before the variety show performance, the “I Almost Do” songstress teased her song selection during a Thursday, November 11, appearance on The Tonight Show Starring Jimmy Fallon. 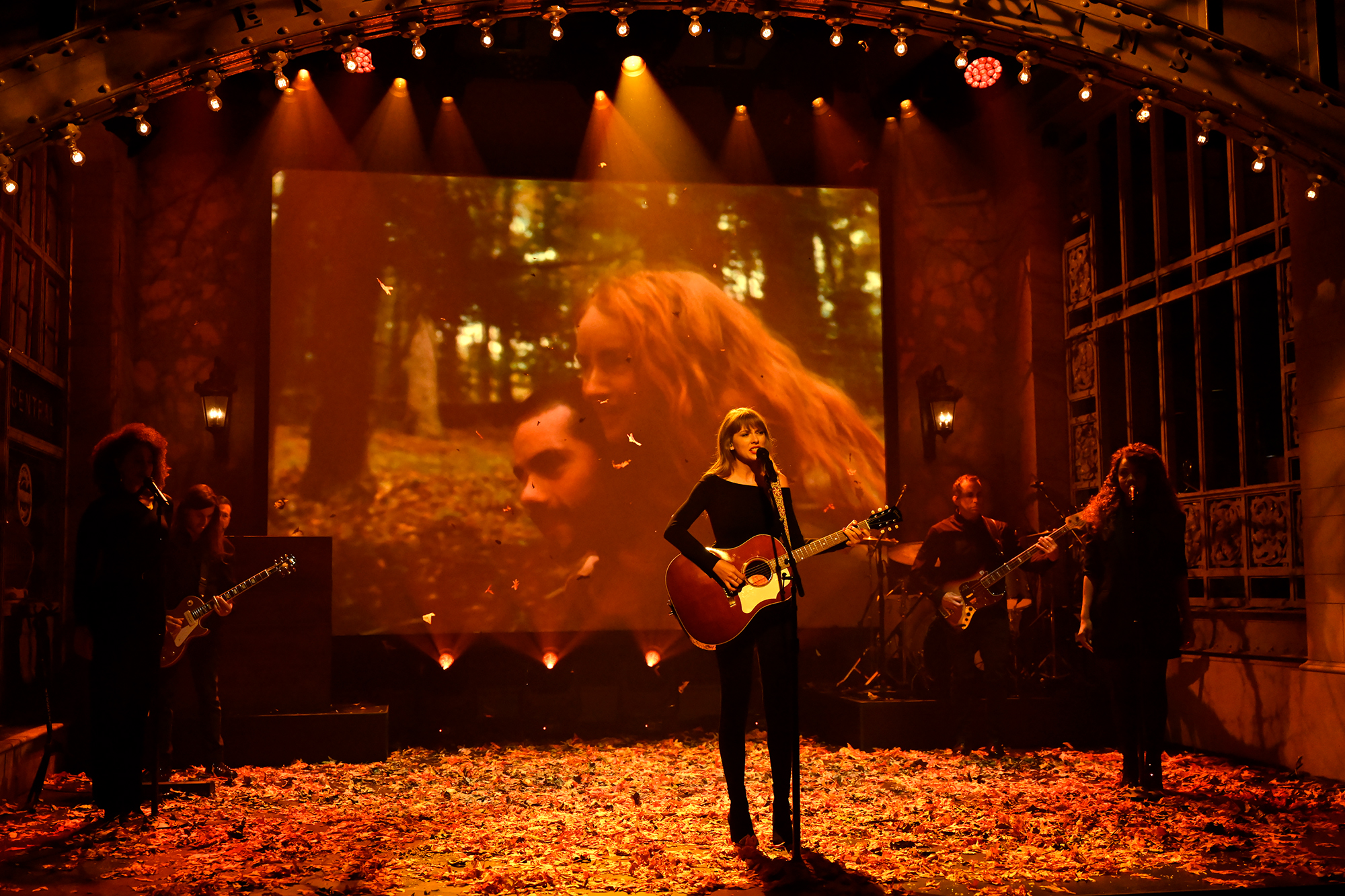 “I love to hint. What if it was not two songs as much as it was one song that is the length of three songs,” she noted at the time. “We’re making moves.”

Jimmy Fallon weighed in, seemingly clued in, responding, “I know all too well what you mean, buddy,” as the pair made eye contact.

The Cats actress released the remixed version of Red — which was initially released in October 2012 — on Friday, November 12, after plenty of online Easter eggs and fan excitement.

“I’ve always said that the world is a different place for the heartbroken. It moves on a different axis, at a different speed,” the Pennsylvania native announced the new album via Instagram in June. “Time skips backwards and forwards fleetingly. The heartbroken might go through thousands of micro-emotions a day trying to figure out how to get through it without picking up the phone to hear that old familiar voice. In the land of heartbreak, moments of strength, independence, and devil-may-care rebellion are intricately woven together with grief, paralyzing vulnerability and hopelessness. Imagining your future might always take you on a detour back to the past. And this is all to say, that the next album I’ll be releasing is my version of Red.”

Taylor Swift Through the Years: From Nashville Upstart to Pop Superstar

She added at the time that she aimed to experiment with different sounds and collaborators while rerecording her popular tracks — which include “Red,” “I Know You Were Trouble” and “All Too Well” — on the 30-song record. Both versions of “All Too Well” made headlines as Swift sang about her brief 2010 romance with Jake Gyllenhaal. In the unabridged version of the “from the vault” track, the Grammy winner even alluded to their age difference. (The Brokeback Mountain star is 40.)

“And I was never good at telling jokes but the punchline goes / ‘I’ll get older, but your lovers stay my age,’” Swift sang. “They say all’s well that ends well / But I’m in a new hell every time you double-cross my mind / You said if we had been closer in age maybe it would have been fine / And that made me want to die.” 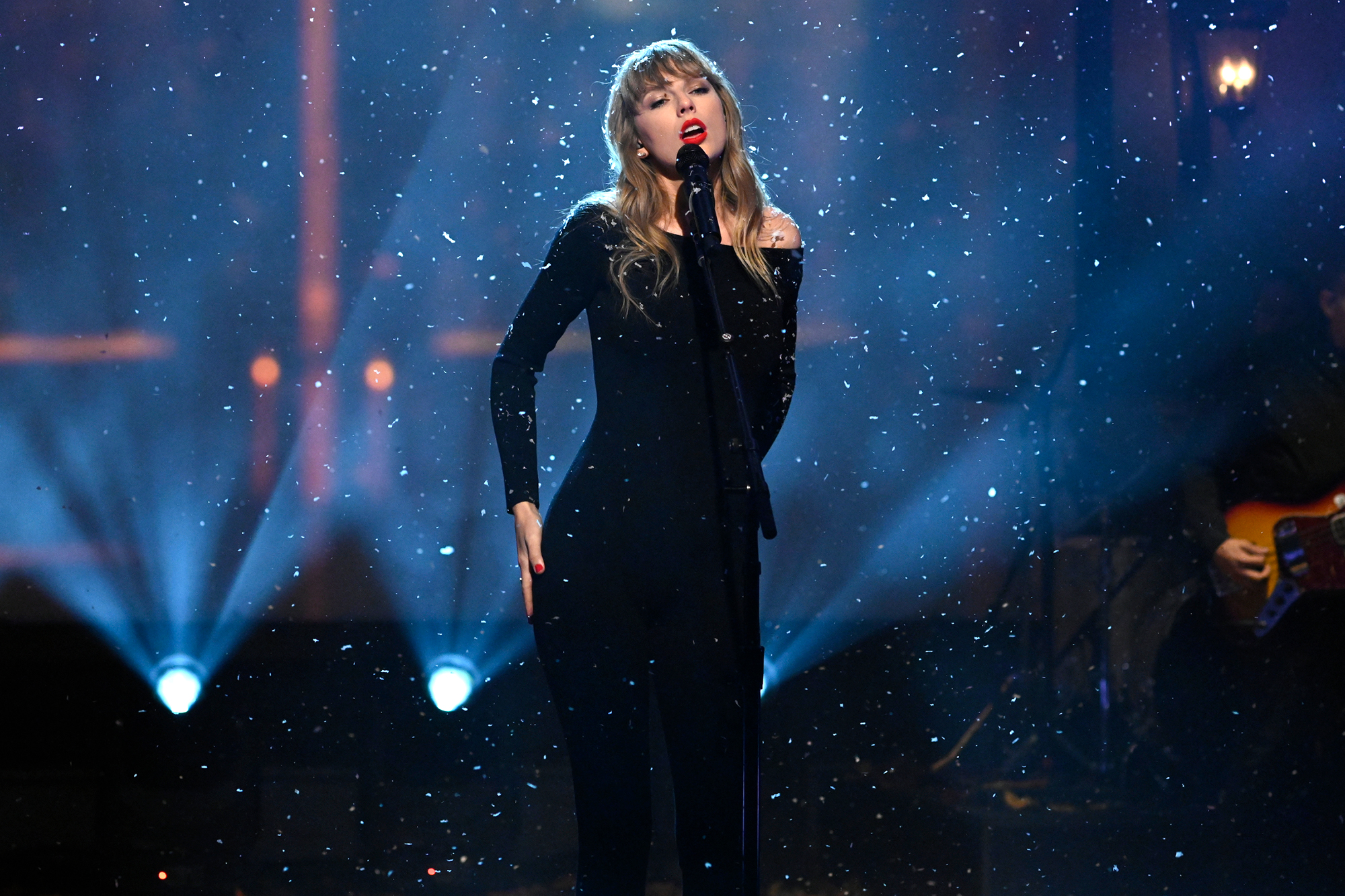 The Valentine’s Day actress, who previously released her new version of Fearless in April, planned to rerecord all six of her past albums after Scooter Braun’s rights to the masters expired in 2019.

Much like her Fearless (Taylor’s Version) album, Swift’s new version of Red features a handful of previously unheard “from the vault” songs and celebrity duets featuring the likes of Ed Sheeran, Phoebe Bridgers and Chris Stapleton.  She also teased a 10-minute version of “All Too Well.”

Most Memorable ‘Saturday Night Live’ Hosts Over the Years

Weeks earlier, the “Christmas Tree Farm” performer made headlines during her surprise performance at the Rock and Roll Hall of Fame induction ceremony, in which she covered Carole King’s “Will You Still Love Me Tomorrow” and “You’ve Got a Friend” at the October 30 event at the Rocket Mortgage FieldHouse in Cleveland, Ohio.

“It was a watershed moment for humans in the world with feelings and for cats who have big dreams of one day ending up on iconic album covers,” the “Bad Blood” performer explained, paying tribute to the Gilmore Girls alum, 79, and her acclaimed songwriting style. “Her songs speak to the true and honest feelings that everyone has felt, is currently feeling, or hopes to feel one day. So it is only right for them to be passed down like precious heirlooms from parents to children, from older siblings to younger, and from lovers to each other.”

For more, watch the video above!

Listen to Watch With Us to hear more about your favorite shows and for the latest TV news!