Geraldine Hickey’s Dr Steph Huddleston, of the fictional sexual health clinic in 9Go!’s mockumentary series, Metro Sexual, back for a second season, is everything you’d want in an STI specialist. Well, almost. She shares Hickey’s warmth, mastery of deadpan and gift for turning the ordinary into the hilarious. But things have a way of going pear-shaped in her consulting room. The slip-ups, the shocking symptoms and the misunderstandings allow us to giggle at the rude bits while raising awareness in a world gone wild on hook-up apps.

“Sexual education in this country is so woeful,” says Hickey, who, along with her co-star, series co-creator Riley Nottingham, delivers short, sharp sexual health messages at the end of each episode (which, at 20 minutes, are twice the length of the debut season). 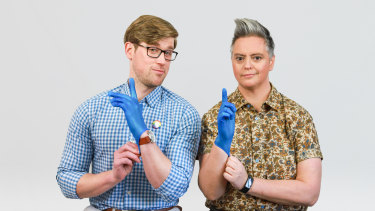 Riley Nottingham and Geraldine Hickey play doctors at a sex clinic in the comedy Metro Sexual.

“That’s probably crucial as to why the show was made, because there’s nothing else around like it … I learnt so many things from the writers – stories about young adults not using condoms because they didn’t grow up hearing that. The threat isn’t in front of them until it’s there.”

In development for several years, Metro Sexual is the brainchild of Nottingham and Henry Boffin. When they first approached Hickey, via Twitter, she thought she was agreeing to yet another student project, at best a web series. She’s pleasantly surprised that a sitcom featuring two gay central characters was picked up by a commercial network (the owner of this masthead).

“Most comedians trying to make content in Australia, it seems, all pitch to the ABC because that’s who makes it. So I’m hoping Metro Sexual opens the door for others to start thinking about other avenues. But also, it would be great if network television could be a bit more forthcoming in making Australian content, because we make really good stuff.”

For Hickey, her television work (Rosehaven, The Project, Have You Been Paying Attention?, Hughesy, We Have a Problem) is a “bonus”. Live comedy is where her heart belongs. Winning the top gong at the 2021 Melbourne International Comedy Festival has “grown her audience”. Except, perhaps, in Western Australia, where she arrived via a well-timed stint in Hobart opening for Hannah Gadsby, during the 2021 Victorian and NSW lockdown.

“I was trying to get gigs and people were like, ‘Oh, sorry, we’re booked up,’ and I was like, ’I’ve just won the biggest award in comedy. Let me get up for five minutes!”

When she managed to secure a spot, she was shocked by the “different world” in which she found herself. Her opening line, “I’m from Victoria, so it’s really great to be here,” was met by boos.

“One of the other comics got up and made this joke about how the Perth economy was paying for all the Victorians to be able to sit at home on their arses. I think a lot of them really believe their mining is what is keeping this country going, and they see all of us on the east coast sitting at home because we can and just being lazy, and it was like, ‘You guys have no idea how shit it is’.

“COVID created more of a divide. I found it really weird that when there was fighting between NSW and Victoria, Perth was just like, ‘Yeah, but what about us?’ And it was like, ‘What do you mean, what about you? What do you want?’ It was this weird middle child syndrome.”

She spent a memorable AFL grand final, alone and “bawling” at the back of a crowded beer garden in Darwin.

“I’m not even a Melbourne supporter, but I knew what that meant for so many people in Victoria, just to have a win. It was such a big moment, and the rest of the country didn’t realise.”