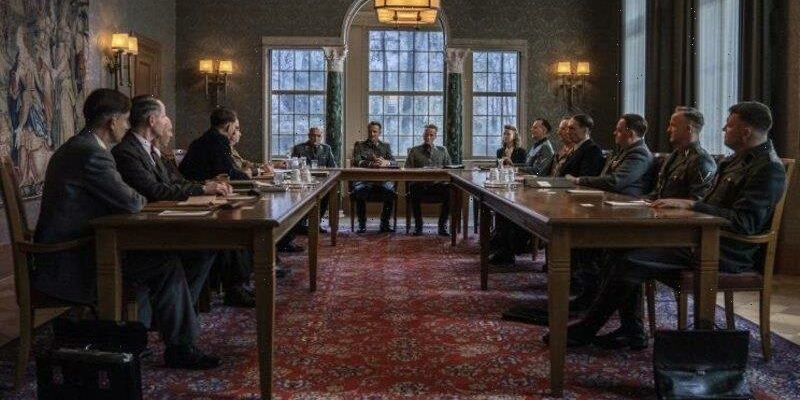 The word missing from the translation of the original German title is “Wannsee”. Before the war, wealthy Germans had fine homes beside this lake outside Berlin. The name was forever sullied by what took place there on January 20, 1942. 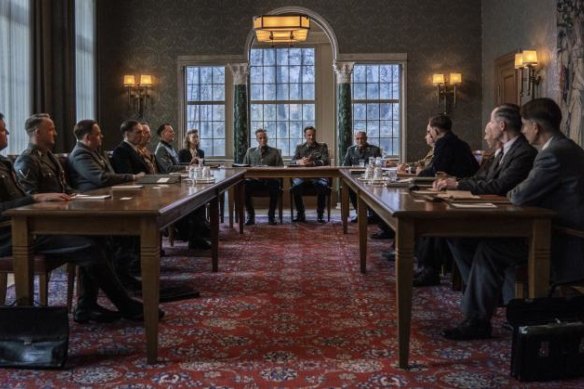 It took just 90 minutes for the bureaucrats and Nazi hierarchy to agree their ‘final solution’.Credit:

On that morning, 15 men from the Nazi party, the SS and various state ministries gathered in a large house to discuss “The final solution to the Jewish problem”. None was surprised by the agenda: executions and transportation had been going on since 1933, but only some knew about the proposed plan to use gas instead of bullets at camps in the east. All knew the plan of eradication was not proceeding fast enough for Hitler. And with so many countries now under Nazi occupation, the non-German Jews had to be sorted.

The agreement on a plan to murder 11 million European Jews apparently took 90 minutes. The film takes 15 minutes longer, allowing for a few informal moments over coffee and cognac. Most of the film follows practical matters, presided over by Reinhard Heydrich, Himmler’s second-in-command. Philipp Hochmair plays Heydrich with manners and bonhomie, which makes him more monstrous. Education and culture did not enlighten him.

He lays out the problems, wrapped in a veneer of duty. It is distasteful work but we are like surgeons, cutting off the leg to save the patient. Adolf Eichmann (Johannes Allmeyer) sits nearby, with all the facts and figures. Heinrich Muller (Jakob Diehl), head of the Gestapo, would happily have taken the men from the ministries outside and shot them.

Heydrich proceeds: how do we transport so many Jews to the east, and how do we kill them when they get there? Except that he doesn’t use words like kill or murder. He made sure the terminology was hidden: “Special treatment” and “Einsatzgruppen”, for the murder squads now operating in the east.

A stenographer took notes so we know a lot about what was said. There are some informal conversations, which would have had to be imagined by the writers. The rest is documentary-like in its precision.

The effect is beyond chilling. It’s not an easy film, what with a large cast of participants and wall-to-wall German dialogue, but it is an important one if you want to understand how this thing happened.

East German-born Matti Geschonneck directs with icy clarity. He lets us see the individual flaws of each man – the ruthless disdain of the hardcore Nazis, the cowardice and capitulation of the bureaucrats, the political cunning of the leaders. The horror of it is that most of them see it as a normal day’s work – nothing exceptional. It is the Fuhrer’s wish: responsibility parked. The banality of evil, indeed.