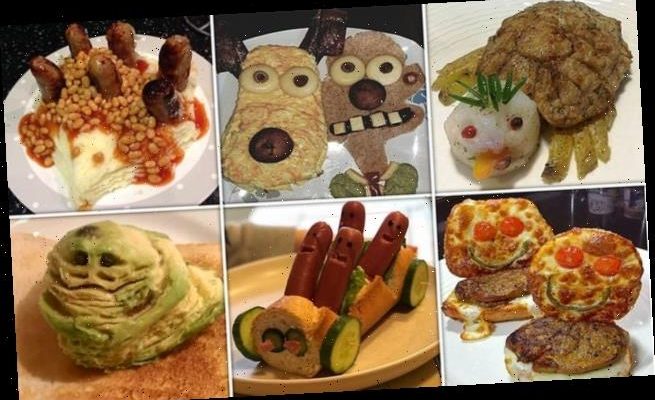 Pinterest has a lot to answer for! Aspiring foodies show off their ’embarrassing and vile’ creations after trying the trend for turning food into cute characters

But while these elabroate creations might look fabulous on Instagram and Pinterest, some amateur cooks have created plates that look ‘creepy and vile’ after attempting to style their meals into smiling faces or popular movie characters.

Artistic British foodies shared their bizarre creations to Twitter page Rate My Plate, where other food lovers were left horrified by the ’embarrassing’ and ‘disturbing’ dishes.

One person ambitiously tried to turn their omelette and toast into Wallace and Gromit, while another recreated Frozen’s popular snowman Olaf in mashed potato, which was described as ’embarrassing’.

Elsewhere, one person transformed their sausages, mash and beans into a hedgehog while another foodie’s avocado on toast bizarrely resembled Star Wars’ Jabba the Hutt.

Here, FEMAIL shares some of the ‘creepy’ food creations that were hilariously slammed as ‘sinister’ and ‘s**t’ on social media. 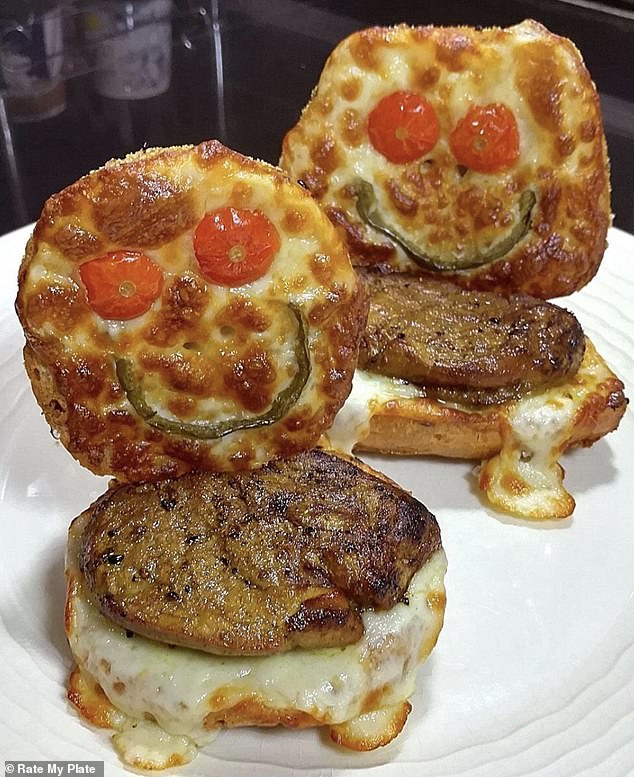 Say cheese steaks! Artistic foodies decided to turn their food into smiling faces or characters, with Harry H transforming his pork tenderloin steaks into a ‘creepy’ face using cherry tomatoes as the eyes, jalapeño as the smile and country buns with mozzarella as the head 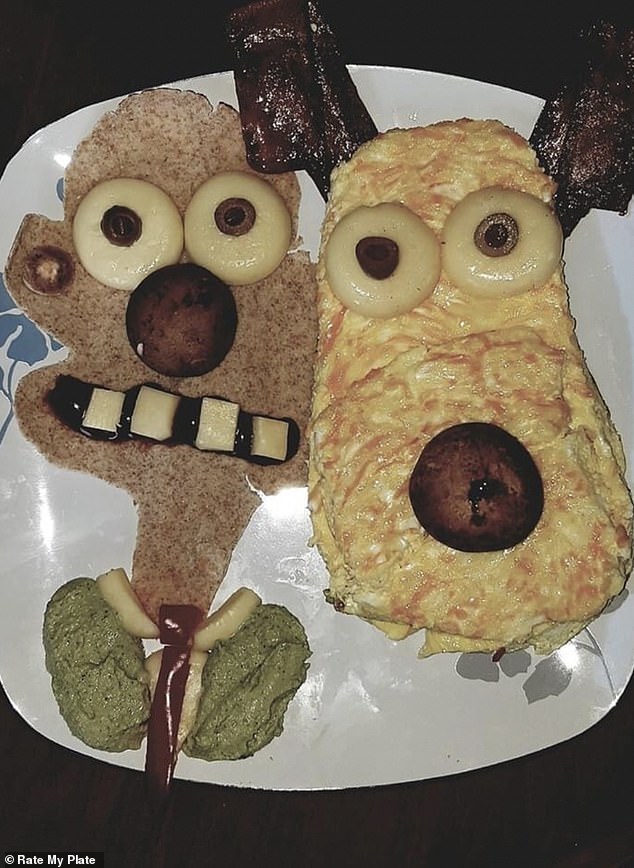 One woman, known only as Mary P, proved she wasn’t short on time as she recreated movie cartoon characters Wallace and Gromit using bread and an omelette. But the creative meal presentation was immediately slammed as ‘nightmarish’ and ‘deeply disturbing’ by horrified social media users 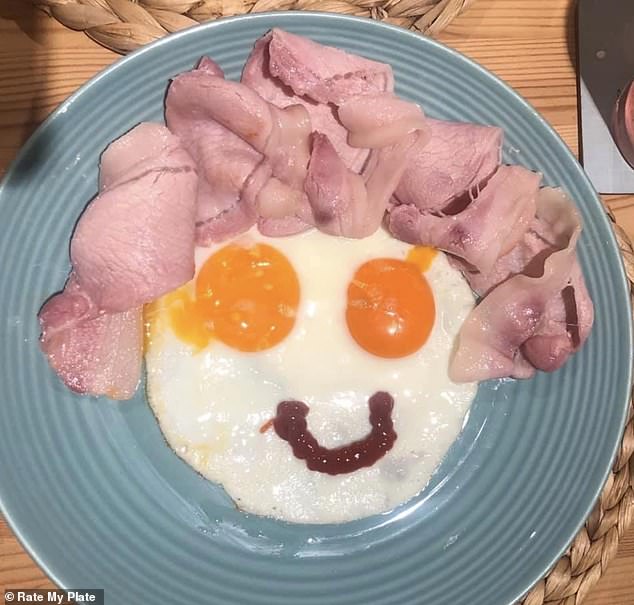 Bad hair day! Another man, known as Niall,  presented his cooked breakfast as a smiling face with curly hair using a double-yolked egg as the eyes, sauce as the mouth and bacon as an impressive mane of curly hair. His cooking techniques were criticised by social media users, who insisted that he should have cooked the pale bacon for longer 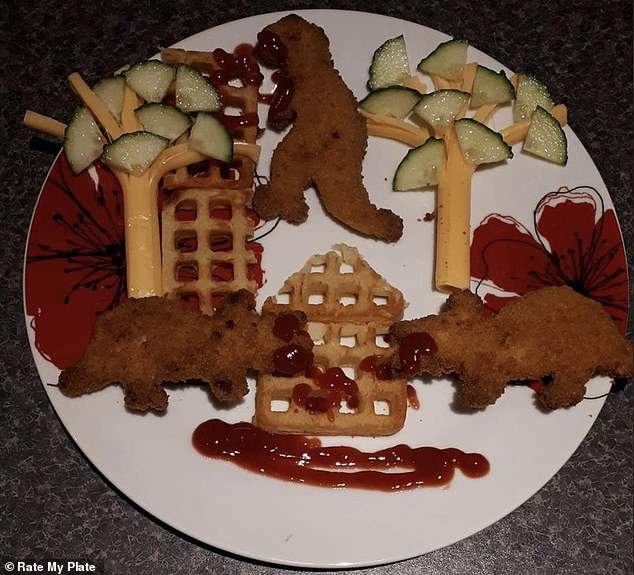 ‘Jurassic Barf!’: Nicola D used an unusual mix of ingredients to create a graphic scene showing ‘waffle houses’ being attacked by ‘bloody turkey dinosaurs’, while her invention left users divided, as some deemed it to be a ‘work of art’ while others argued it was ‘absolutely awful’ 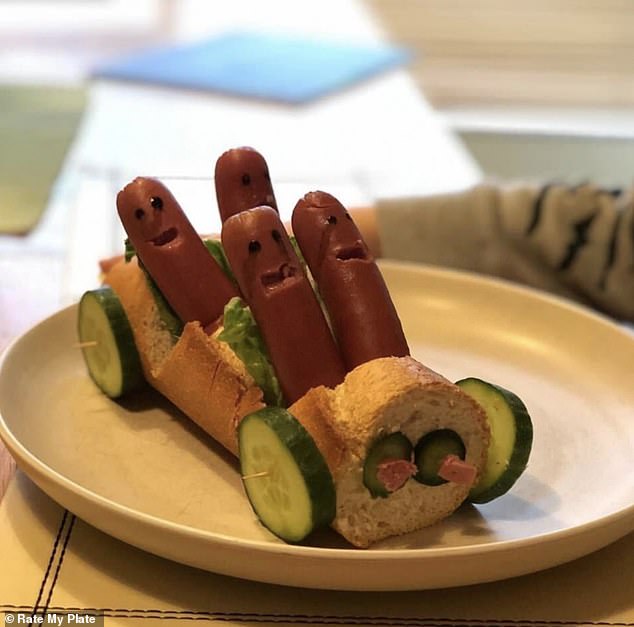 While Frankie F went to extraordinary lengths to turn their meal into a car complete with passengers joyriding. Frankie cut a baguette to look like a roofless car, attached cucumber to create four wheels and also made sausage passengers. But the picture was slammed by social media users, with one claiming that it was a lot of effort to go to just to ‘make your kids cry’ 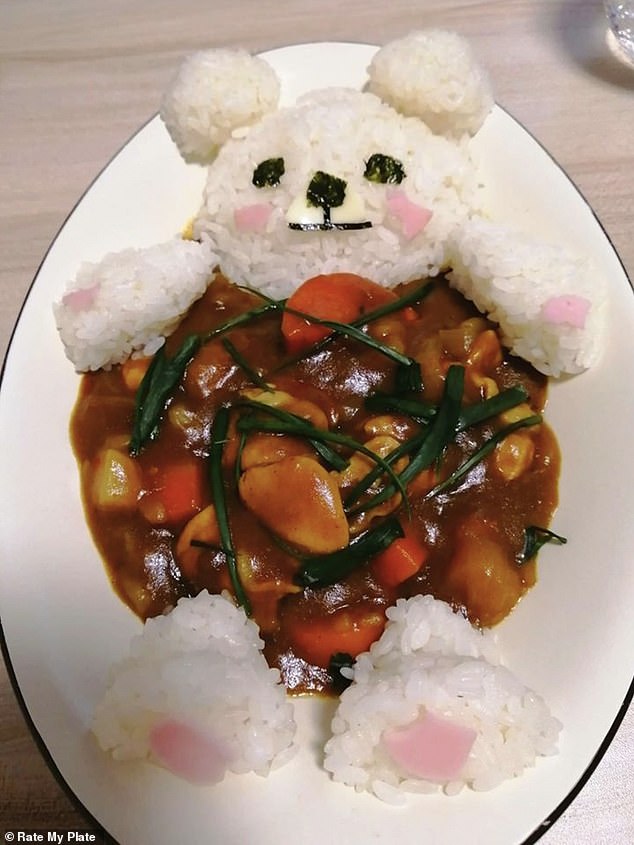 One creative woman, Diana E,  got creative after cooking curry and rice, presenting the dish in the shape of a teddy bear. The head, ears, arms and legs were made out of balls of sticky rice, and the creation even featured pink paws and a smiling face. But other Twitter users said the bear looked like ‘roadkill’ because the stomach was created using the runny curry 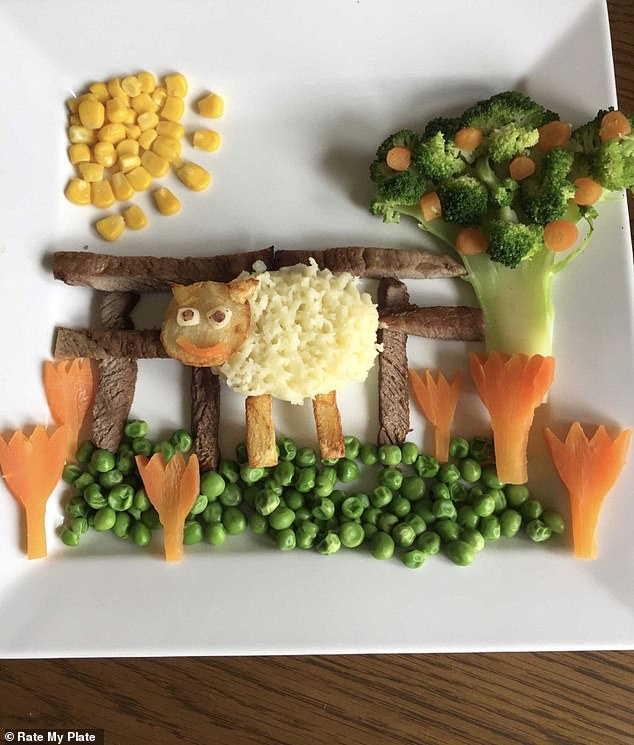 One man, called Michael W, left people horrified after creating a farm and a lamb – using cooked lamb meat. He transformed his cooked lamb into a fence which had a lamb, made out of mashed potato and vegetables, stood in front of it. But the invention divided social media users, with one praising his design as ‘genius’ while another insisted it was ‘sinister’ 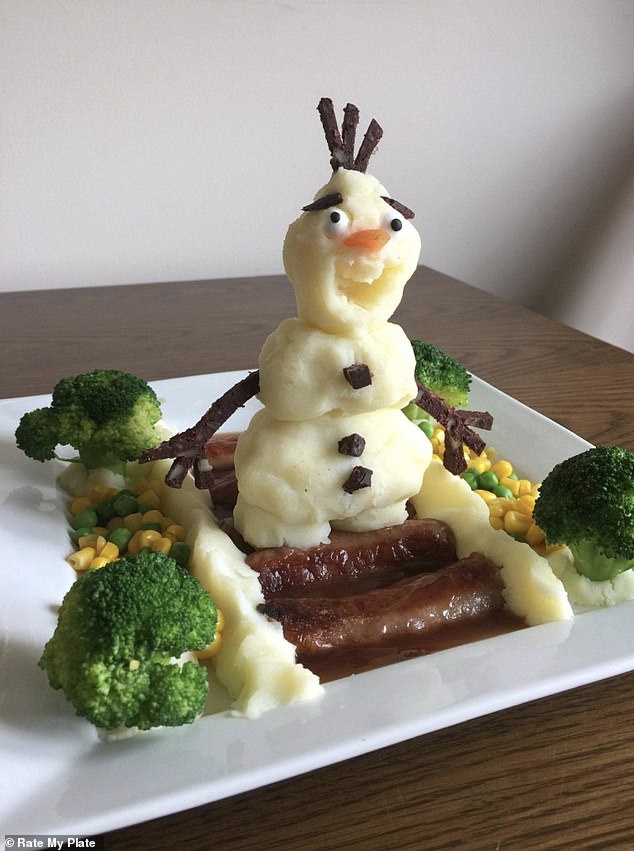 Another man, called Mike W, hilariously transformed his sausage and mash into a detailed version of popular Frozen snowman Olaf. One person branded the food a ‘culinary embarrassment’ while another Twitter user hilariously urged him to stop ‘playing’ with his food