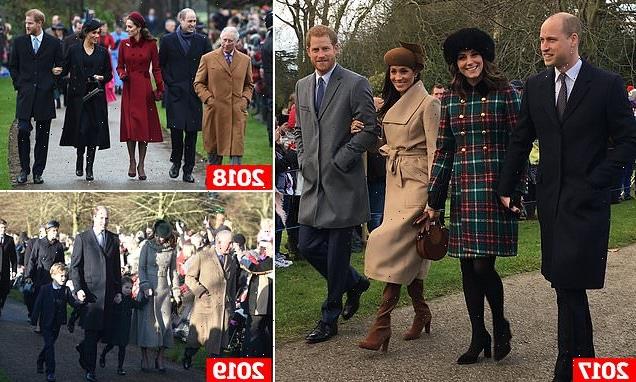 King Charles takes charge of Royal Christmas: Fergie will lunch with family at Sandringham as Harry and Meghan stay away but Prince Andrew WON’T join others in Christmas Day walk to church

King Charles is taking charge of the Royal Christmas – their first at Sandringham since he acceded to the throne – with Fergie set to join them for lunch while Harry and Meghan stay well away.

The disgraced Prince Andrew will also be in attendance but is unlikely to walk with the royal family to church on Christmas day.

It comes as King Charles finally threw the Duke of York out of the royal fold, informing him he is ‘on his own’ after the scandal surrounding his associations with the late paedophile financier Jeffrey Epstein, a source claimed. 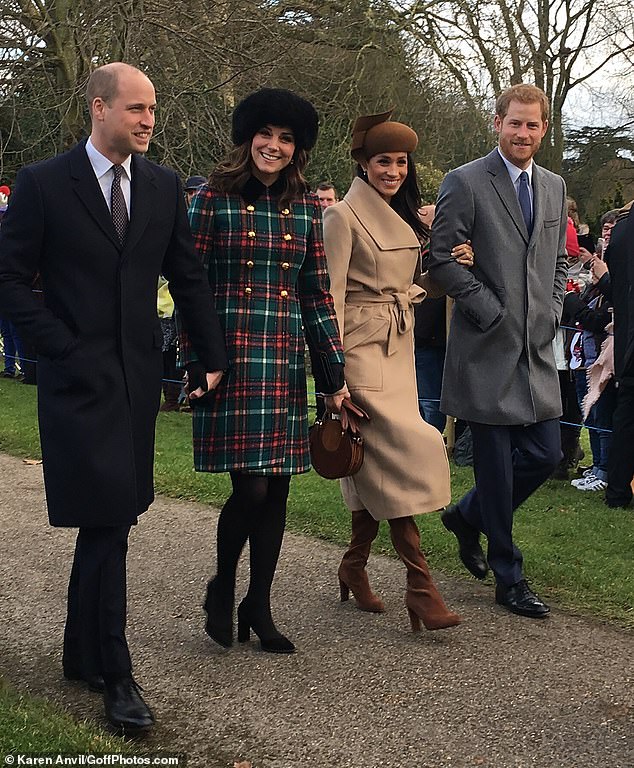 Harry and Meghan are staying well away from the Royal Family Christmas this year while William and Kate are to join King Charles at Sandringham. Pictured: The four attending the Christmas Day church service at St Mary Magdalene Church on the Sandringham Estate in 2017

Charles delivered his most poignant Christmas speech to date in which he nodded to his late mother the Queen in a moving tribute in St George’s Chapel, where the world was afforded a final glimpse of her coffin.

He is expected to speak movingly about Queen Elizabeth in the message, broadcast at 3pm on Christmas Day.

The broadcast was produced by BBC Studios Events rather than ITV, whose turn it was to record the King’s first festive address under a rotating producer system between the BBC, ITV and Sky News. 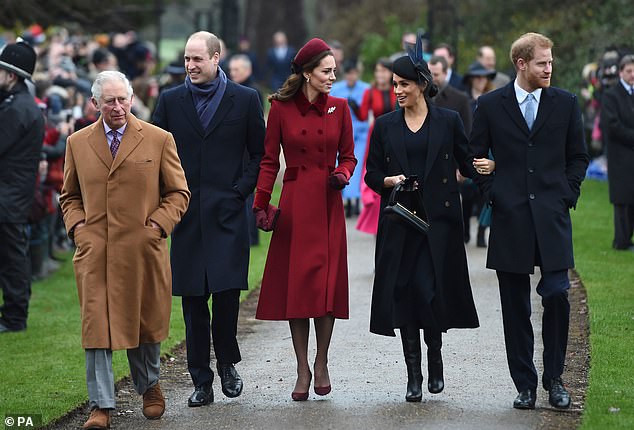 Despite the turmoil caused by the Duke and Duchess of Sussex’s Netflix docuseries, the King will want to make his mark by emphasising ‘tolerance and family harmony’. Pictured: The Royal Family Christmas Day walk to church in 2018

According to The Times, a Buckingham Palace spokesman said the decision was made because the BBC had ‘experience of shooting in St George’s Chapel this year’.

Royal biographer Sally Bedell Smith commented that despite the ructions caused by the Duke and Duchess of Sussex’s explosive accusations in their recent Netflix docuseries, the King will want to make his mark by emphasising ‘tolerance and family harmony’.

‘Charles has invited the Duchess of York for the first time since her divorce from Prince Andrew,’ she said. 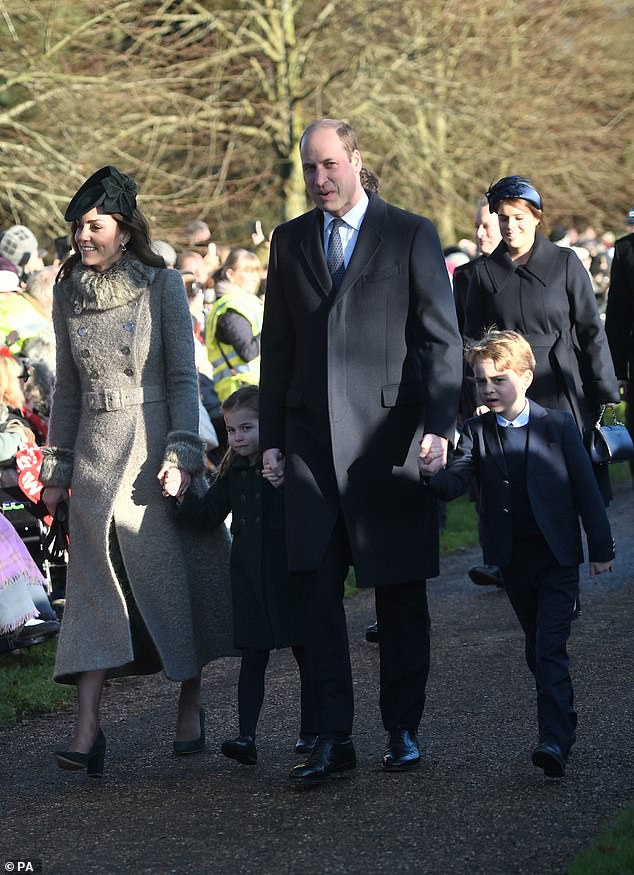 ‘The Duke of Edinburgh had been the main obstacle to Fergie’s inclusion, and the Queen had arranged for Fergie to stay nearby Wood Farm so she could see her daughters Beartrice and Eugenie after the celebrations at Sandringham.

‘While Prince Andrew is expected to be at Sandringham this year, he probably won’t be included in the walk to church.’

For Camilla and her family there will be significant change this year. Instead of staying at Sandringham for a few days before retreating to her home in Wiltshire to join family, she will stay at Sandringham with the King – joined by at least one of her children – Laura and her husband Harry Lopes – and her grandchildren. It is unknown whether Tom Parker Bowles will attend. 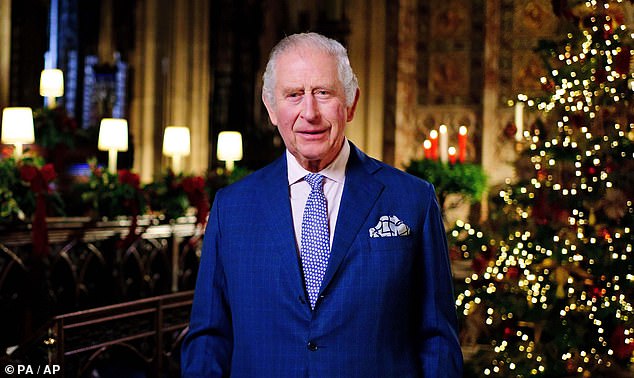 A source said: ‘That will change the tone of things. Given the wonderful convivial nature of all of her family, that will bring a lot of fun and energy.’

Others expected to join this year include are Mike and Zara Tindall and her children, as well as the Earl of Snowdon and his sister Lady Sarah Chatto.

Royal Family Christmas traditions are expected to continue, such as opening presents on Christmas Eve before their formal dinner. 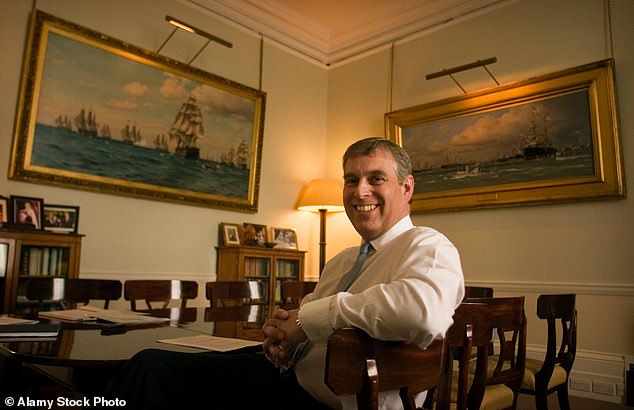 King Charles has finally thrown Prince Andrew out of the royal fold and told him he’s ‘on his own’, sources claimed

The presents – usually cheap and cheerful – are put on trestle tables covered with linen cloths, with each family member’s gifts in neat piles separated by ribbons.

The family will walk to St Mary Magdalene church on Christmas Day, with lunch provided afterwards for the whole family.

Meanwhile, the family’s traditional Boxing Day shoot is expected to take place but it unknown whether the King will join it.

Charles and Camilla will not, however, stay at Sandringham for as long as the late Queen used to. She would always stay until after February 6, which is the anniversary of her succession. 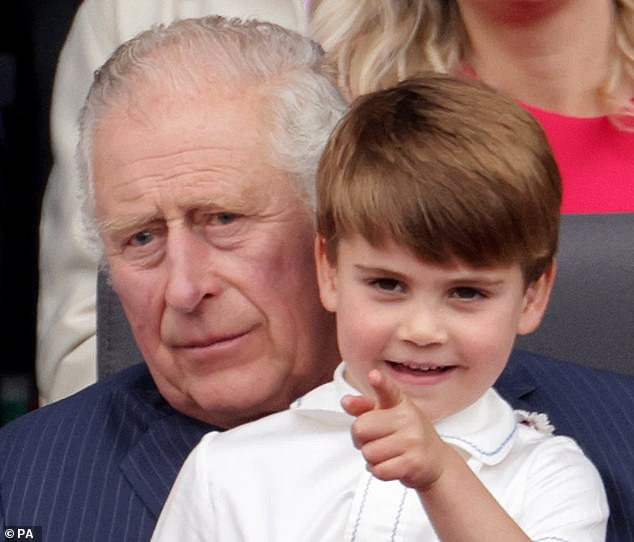 Prince Louis, pictured his his grandfather King Charles, caught the nation’s attention at the late Queen Elizabeth’s Platinum Jubilee celebrations over the summer with his mischievous antics

Instead, the King and Queen will leave some time after the new year to go to Birkhall in Scotland, where Charles has always spent weeks during the festive period.

The four-year-old caught the nation’s attention at the late Queen Elizabeth’s Platinum Jubilee celebrations over the summer with his mischievous antics.