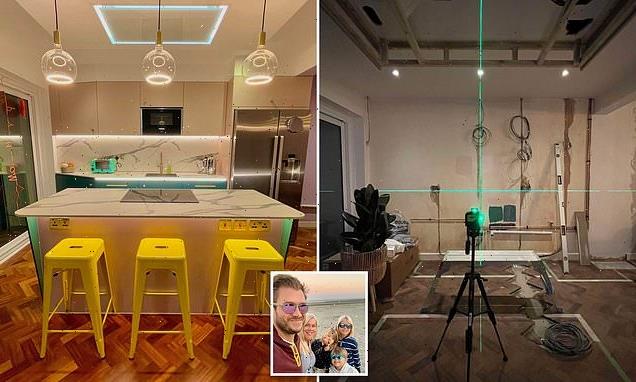 DIY dad! Father-of-three reveals incredible kitchen transformation for £4,000 after he crafted his own cabinets from MDF and installed a kitchen island

A father has revealed his incredible kitchen transformation for just £4,000 – after he crafted his own cabinets from MDF and installed a kitchen island.

Adam Stephens, 40, from Surrey, made his own cabinets and kitchen island out of raw materials and fitted them himself to save money during the pandemic.

The entire project took him 12 weekends, spread between April and August last year and cost around £4,000. The bespoke nature of the kitchen design and the angled cabinets means he believes he has saved around £10,000 by doing it himself.

Adam now plans to use his DIY skills to renovate the entire rest of his home. 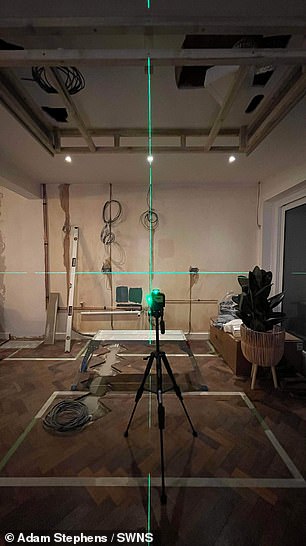 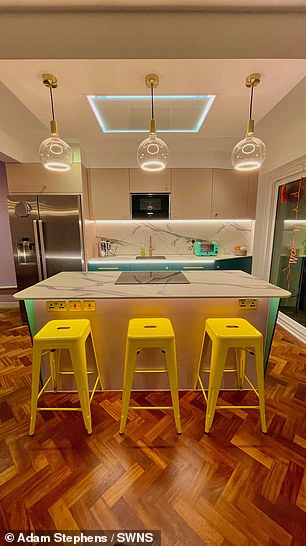 Adam Stephens and his wife Joanna, 41, moved into their dream home with their three children in December 2020. They bought the house knowing it would require a lot of work but were convinced the lay out was right to fit their family dynamic 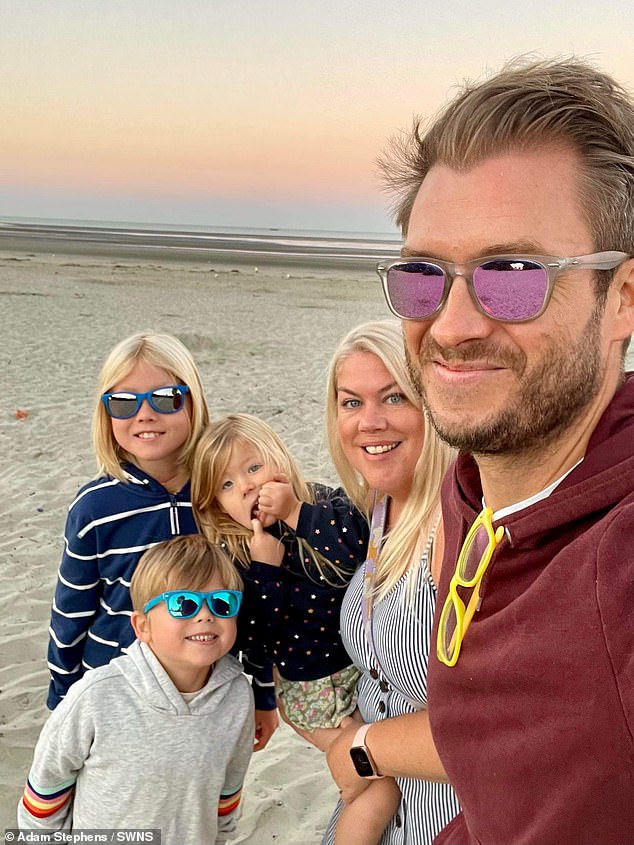 Adam, 40, (pictured with wife Joanna, 41, and their children) from Surrey, crafted his own cabinets and kitchen island out of raw materials and fitted them himself to save money during the pandemic

Adam said: ‘I practised by building beds and cabinets for my kids, and that gave me the confidence to take on the project myself. I’m so happy with how it’s turned out, and the money I’ve saved is eye watering.’

Adam and his wife Joanna, 41, moved into their dream home with their three children in December 2020.

They bought the house knowing it would require a lot of work but were convinced the lay out was right to fit their family dynamic.

The couple needed furniture for their new place and Adam decided to create his eldest son’s bed and bedside table. 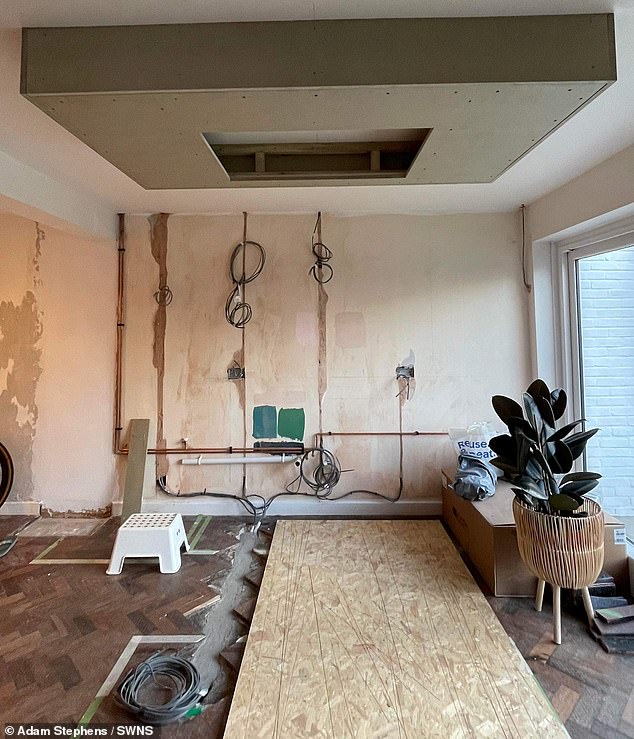 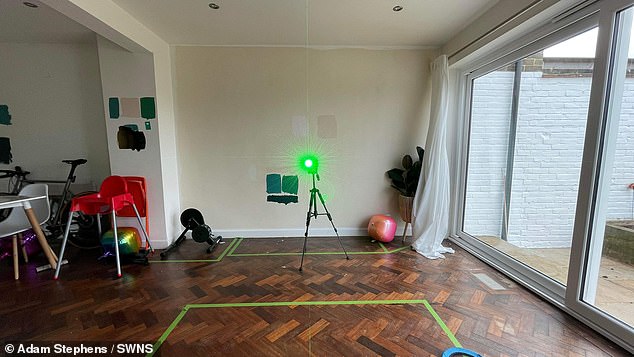 He used his skills as a professional graphic designer to create a gorgeous new kitchen in the couple’s dream home. Pictured, during the renovation 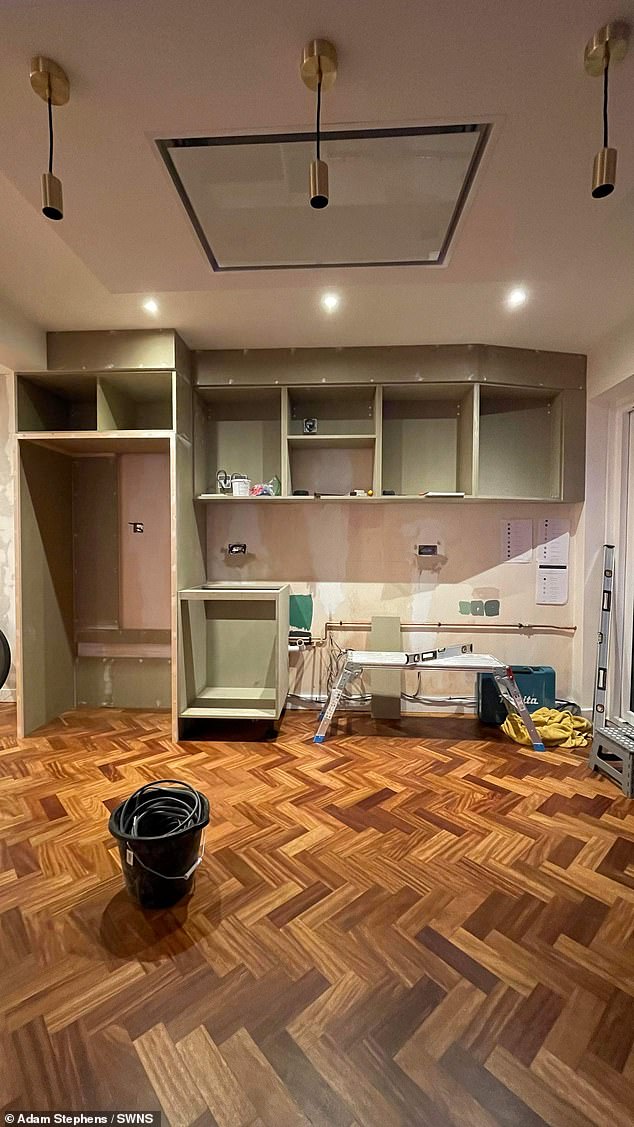 After knocking up both for less than £120 using stud timber, sheet material and some furniture legs, the project gave him the confidence to take on a bigger challenge.

He designed and built his dream kitchen by himself, only using tradesmen for the electrics and plumbing work.

He used 12 sheets of moisture resistant MDF to build his own kitchen cabinets and fitted them to the walls.

The father-of-three then ordered in and installed the work tops and built an extractor bulkhead to sit over his DIY kitchen island.

After installing his own LED lighting around the kitchen he called in the electrician to fit the appliances and connect the main lights. 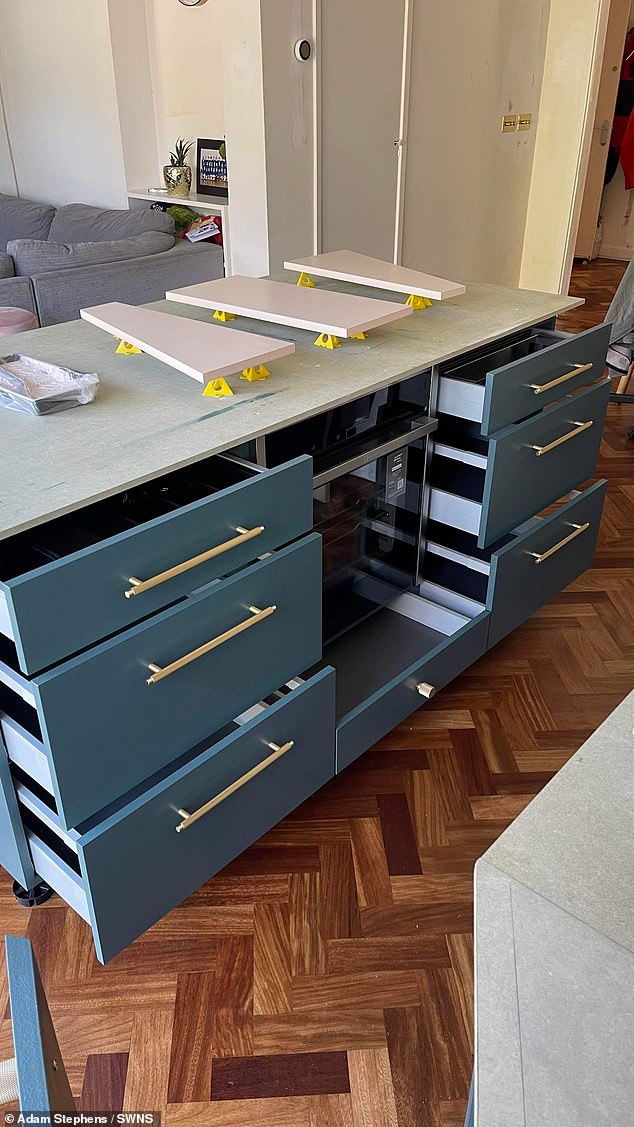 He installed the island (pictured) after practising building furniture for his children’s rooms. He created a bed and a bedside table for his eldest son

Adam, who works as a graphic designer, said: ‘I just used the experience I got building furniture in my sons’ bedrooms and transferred it to the kitchen.

‘I also watched countless YouTube videos on building and installing cabinets and on how to use a track saw. Everything got easier the more I did it, and I just took my time, step by step.

‘I had lots of time to complete the kitchen because we weren’t actually knocking the existing one down until after it was ready.

‘We decided to build the new kitchen in a different part of the house, so we could still feed the kids throughout the whole project. That definitely took the pressure off.’ 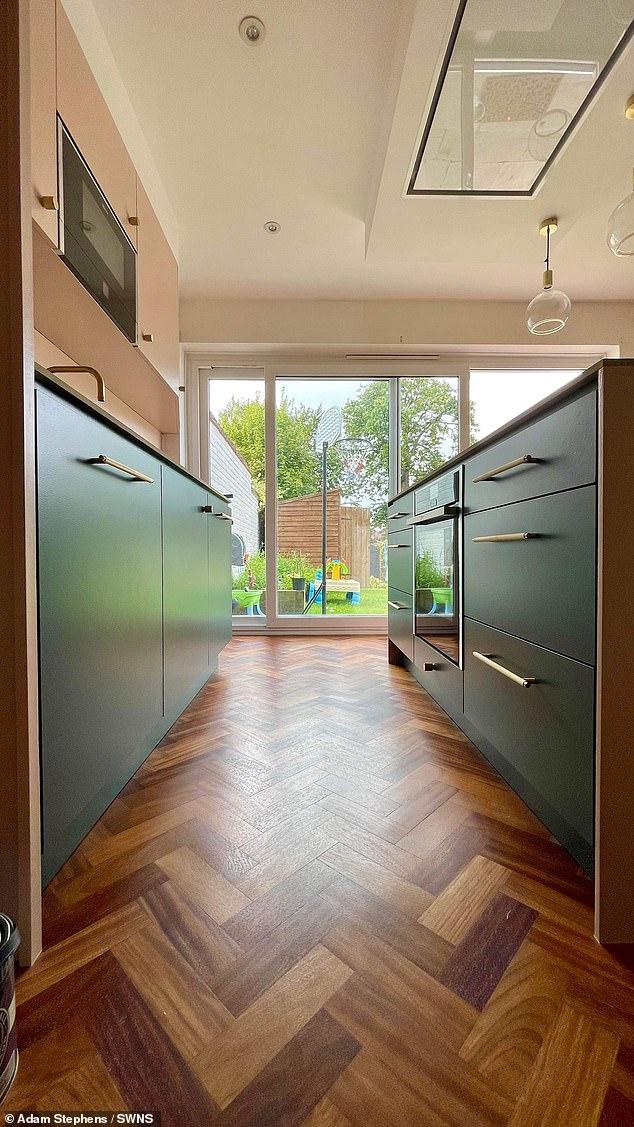 Adam said: ‘The key is practising in areas of your home that aren’t as visible so you can build up your confidence’

Since finishing the kitchen, Adam has also taken on a number of other home DIY projects.

He’s refurbished a games room for his three children, crafted a floating media wall with hidden shelving and built a locker wall for the hallway.

Adam plans to refurbish the laundry room, the bathrooms, the garage and the master bedroom using the skills he’s learnt so far on his DIY journey.

He’s also learnt how to do his own plumbing which he says he’ll incorporate into the next part of his renovations.

Adam said: ‘The key is practising in areas of your home that aren’t as visible so you can build up your confidence. I’ve learnt plumbing now, so I’ll try to do my own plumbing in the garage before I tackle the laundry room.

‘In between my day job it has kept me really busy, and has been extremely rewarding. I shared photos of my work on Facebook and people have been so complimentary.

‘I’d encourage anyone to have a go at home DIY in some way, shape or form as they may really surprise themselves.’