A 9-year-old Black girl pepper-sprayed by police in Rochester, New York, pleaded “please don’t do this to me” and “it burns” as she waited handcuffed in the back seat of a police cruiser for 16 minutes, according to new police body camera footage released Thursday. An attorney who represents the girl’s family told CBS News they’re going to be “suing for change.”

“Had this taken place in a predominantly White suburb, same actions on the part of the child … this never would have happened,” attorney Don Thompson told “CBS Weekend News” anchor Jericka Duncan. “So why does it take place here? Because the people who live in this area with this color skin are devalued by the Rochester Police Department and traditionally have been.”

Mayor Lovely A. Warren said the city released almost 90 minutes of additional video from the January 29 detainment in order to be transparent.

In the video, the girl can be heard wailing and whimpering that she wants her dad and saying her eyes are burning as an officer tells her an ambulance is on its way but has been slowed by snowy roads.

“Officer, please don’t do this to me,” she says at one point.

“You did it to yourself, hon,” the officer responds.

The girl asks multiple times when the ambulance will come to clean the pepper spray from her eyes and begs to have the handcuffs removed as the liquid runs into her mouth.

“If you stick your head towards the window the cold air is going to feel nice,” an officer tells her as the wait stretches on.

Thompson told CBS News there isn’t a reasonable explanation for pepper-spraying a person after they’ve been restrained. “That’s just punitive,” he told Duncan. “That’s just retribution. That’s just you’re making me angry because I’m a police officer and you’re not following my orders.”

The girl’s mother, Elba Pope, said she called police during an argument with her spouse, but asked officers to call mental health services when it became clear her fourth-grade daughter was headed for a meltdown. 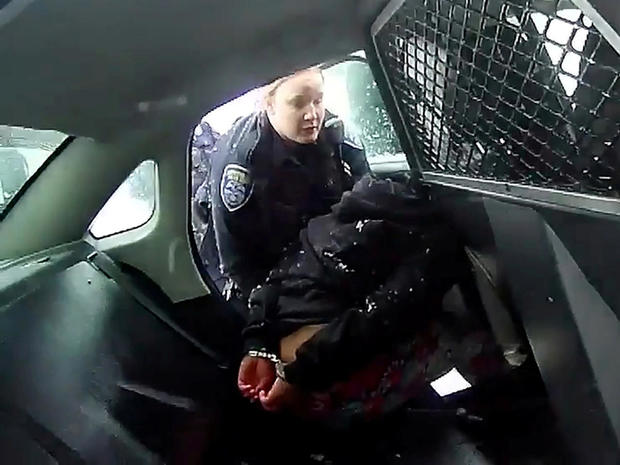 Video shows officers restraining and scolding the screaming girl, telling her they are losing patience as they struggled in the snow to put her in the back of a police cruiser.

The officers are suspended pending the completion of an investigation. Warren said she asked Police Chief Cynthia Herriott-Sullivan to complete it quickly.

“New Yorkers in every corner of the state are sickened by these actions and as a father of three daughters, I’m furious,” Cuomo said in a prepared release.

The harsh treatment of the girl came as Rochester police are under scrutiny for the death of Daniel Prude last spring. Police handcuffed Prude, placed a hood on his head and pressed him to the ground until he stopped breathing.