In American culinary life, few stars are the equal of Julia Child. Certainly, the first, and even now, one of the most enduring. She taught America how to cook, and she taught them how to handle the intricacies of French cuisine. All from a small public television studio in Boston, Massachusetts.

Growing up in the UK, actress Sarah Lancashire had no idea who Julia Child was. Child struck a cultural note which was, at the time, distinctly American, despite her obvious passion for French food, which means the rest of the world did not quite catch up until recently. 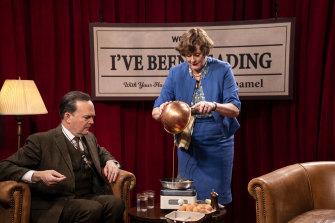 There was a 2009 film, starring Meryl Streep, and a number of books, including the book which started it all, Child’s own Mastering the Art of French Cooking. And in recent years, streaming re-runs of the original rickety masterpiece, The French Chef.

Lancashire absorbed it all, and then pushed it aside, as she prepared to take on the role of Child in the new HBO drama Julia. “There’s such an awful lot of source material available, and that was a starting point to reference her, but at some point I put the written material away,” Lancashire says.

She worked with a vocal coach for a time; Child is noted for a near-falsetto voice which is, politely put, distinct. “Then, I started looking at trying to create a parallel voice, really, that would essentially create the essence of her vocal eccentricity and her singularity but was harmonised with the physical,” Lancashire says.

“Julia had this extraordinarily complex vocal change, which I don’t share with her,” Lancashire says. “I had to find something which worked in parallel and was comfortable. And I watched her. But that was not a hardship. She’s a joy to watch. You want to be in her company, and she makes you feel better about the world.” 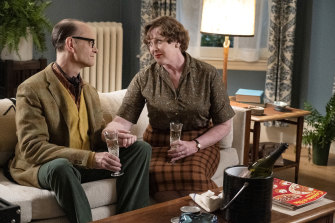 The series is, at its core, a biopic about the late-in-life television and media career of Child. She was the wife of a US diplomat who had, thanks to his various international postings, experienced much of the world’s varied cuisine.

But it was his posting to Paris, France, that transformed the couple, and gave Child the passion for French cuisine. She returned to the US with her husband Paul (David Hyde Pierce) as interest in her book was rising. After an awkward experience cooking an omelette on a TV program, she landed her series.

The show’s creator Daniel Goldfarb describes Julia Child as an indefatigable personality. “There’s something kind of unsinkable about her, she never took no for an answer, she just always persevered, and she persevered with joy,” he says.

She also flourished in later life, Goldfarb says. “She bloomed as she got older and older and more and more comfortable in her shoes and as herself,” he says. “When you watch her, whether she was cooking or whatever she was doing, you saw the joy and the kind of love for life that she had.” 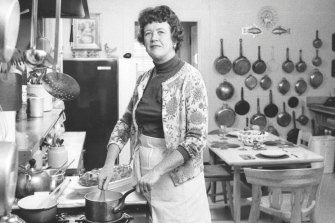 Co-executive producer Chris Keyser agrees. “In some ways the reason why she lasts so long is because her staying power itself is something that we attach to, there’s something about her that doesn’t change for us,” he says.

“Generation after generation, that becomes more and more powerful,” Keyser adds. “So it’s not coincidental that she’s likely to remain somebody who matters in our cultural conversation, simply because every generation seems to have the same reaction to her.”

One aspect of the series is its exploration of television in its infancy and the pioneering place The French Chef had in breaking the medium out of traditional genres like drama and comedy. While not the first factual program produced for TV, it was perhaps the first hit lifestyle program.

“Everyone loves an origin story,” says Keyser. “Whether it’s the X-Men or food on television, there’s something about watching those first moments of discovery. [These characters] come up with, in the moment, a bunch of innovations that will last for half a century or more in food television.

“When the people at WGBH made The French Chef they had no expectations whatsoever,” Keyser says. “The technology was simple. The techniques were simple. The scope of it was relatively simple. There was kind of innocence to it that we miss now, and innocence has a kind of special power.”

What she had, adds Goldfarb – and perhaps here we come close to the X-factor in her success – was an understanding of “how to turn educational TV into entertainment without sacrificing any of its educational value.” That and “she’s a tonic and you can just delight in her company,” he says.