The Victorian opposition would halve emissions by 2030 and legislate the reduction target in a new climate policy to strengthen the Coalition’s credentials on the environment before the November election.

Opposition leader Matthew Guy will on Sunday announce the target, which is in line with state Labor but more ambitious than the federal government, having previously signed off on net-zero emissions by 2050. 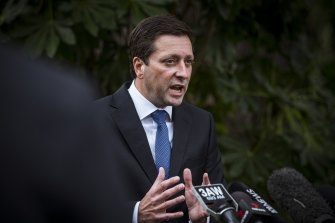 Opposition leader Matthew Guy says he will legislate a 50 per cent emissions reduction target by 2030, if elected.Credit:

The Andrews government already has a 50 per cent emissions reduction target by 2030, but its interim target has not been legislated.

Shadow spokesman for climate change and the environment, James Newbury, said writing the target into law would help drive investment in renewables.

“The Victorian Liberals and Nationals are serious about climate change and have a sensible plan to achieve net-zero based on real solutions, not ideology,” Newbury said.

Kane Thornton, chief executive of the Clean Energy Council, said an interim target of 50 per cent was a good step forward but would ultimately need to be strengthened over time.

“It’s certainly pointing in the right direction,” Thornton said. “We expect at least 50 per cent by 2030, and these are the targets that, we think, will just keep being dialled up, to be honest, in years to come.”

Thornton agreed legislating the interim target would provide more certainty and encourage investment in renewable projects, such as wind or solar farms.

The Coalition would also fund a $1 billion strategy to support clean hydrogen, if elected. The package would not explicitly rule out hydrogen that is produced with coal, but the funding for research and development would focus on producing hydrogen using renewables.

Sunday’s announcement will include a commitment to upgrade transmission infrastructure in western Victoria, a taskforce to fix the state’s power grid, and a recommitment for a local gas supply guarantee.

A supply guarantee would ensure that residents were offered on-shore gas extracted from Victoria first, cheapening gas bills. The Andrews government has also considered the move to tackle the looming supply crisis.

The announcement comes after the opposition promised rebates for both solar panels and home batteries, of up to $4400 for owner-occupiers and $8800 for rentals, expanding on an Andrews government package, a move welcomed by Environment Victoria.

The Liberal Party was wiped out in Victoria at the May federal election, driven in part by so-called teal independents campaigning on climate and integrity. State seats in inner-Melbourne, including Newbury’s electorate of Brighton, could be targeted by candidates running on a similar platform.

The Andrews government argues the opposition has a long history of blocking climate action and talking down renewables. As recently as May this year, the Victorian Liberals and Nationals argued renewables were “not necessarily” less harmful to the environment in every instance.

Tourism Minister Steve Dimopoulos on Saturday said there was no way Victorians could take the Coalition seriously on climate change. 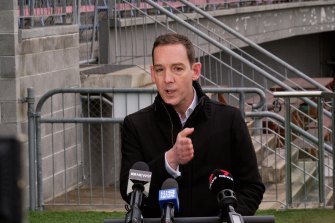 Steve Dimopoulos speaks to the media on Saturday.Credit:Luis Enrique Ascui

“I’ve got to say, there is no way the Victorian community will believe that the Liberal opposition in Victoria is in any way serious about climate change and clean energy. They have spent the last eight years fighting against every measure,” Dimopoulos said.

“Five minutes to midnight, they want to make a promise about investment.”

The Coalition in March confirmed its support for net-zero by 2050, causing some confusion among the opposition at the time, but left the interim target uncertain until now.

Net-zero reduction by 2050 has been legislated in Victoria.

A guide to the environment, what’s happening to it, what’s being done about it and what it means for the future. Sign up to our fortnightly Environment newsletter here.