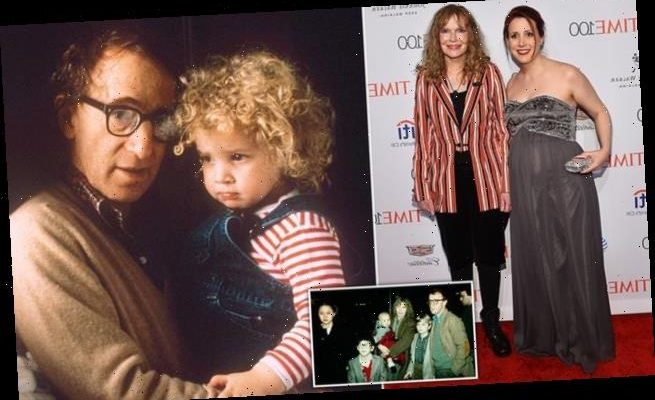 Dylan Farrow has revealed she still ‘freezes up’ if she sees things that remind her of Woody Allen, almost two decades after she first accused him of sexual abuse.

Dylan, now 35, was seven years old when she first claimed to her mother Mia Farrow that she had been sexually abused by Allen, Farrow’s boyfriend of 10 years who had adopted her as a child.

Speaking in an interview with Elle magazine to promote her new book Hush, Dylan, whose brother is #MeToo journalist Ronan Farrow, explained she still has panic attacks prompted by triggers associated with Allen.

She said she might freeze up if she sees a face with thick glasses – Allen’s signature look – or she hears jazz music, which is closely associated with the director.

‘It’s a process,’ she said. ‘I try to take the mindset that I have a 100 percent success rate of getting through every single one of the panic attacks I’ve ever had; none of them have killed me.’ 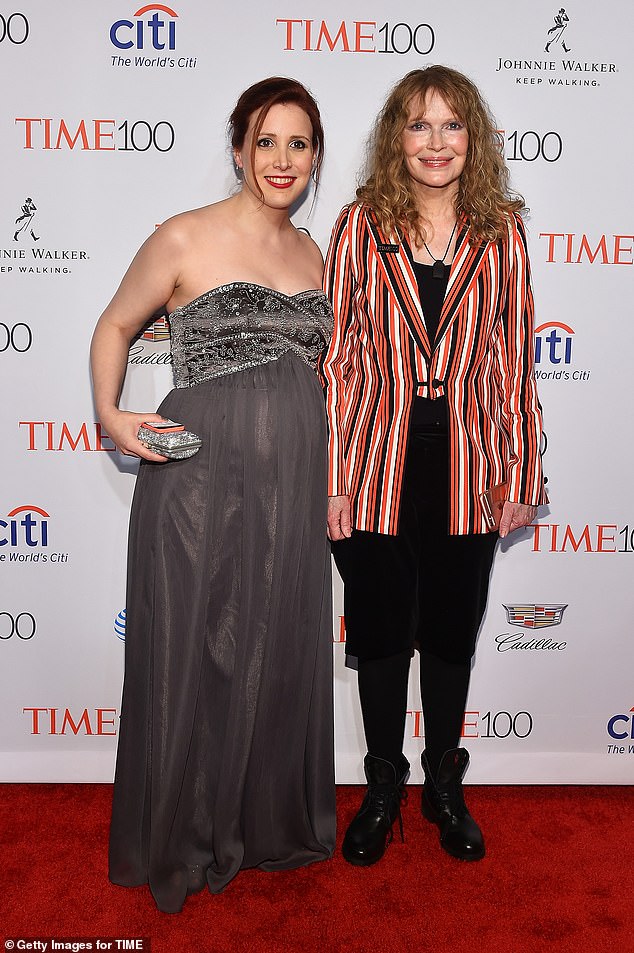 Dylan Farrow has revealed she still ‘freezes up’ if she sees things that remind her of Woody Allen, almost two decades after she first accused him of sexual abuse. Pictured, Dylan with her mother Mia Farrow in April 2016 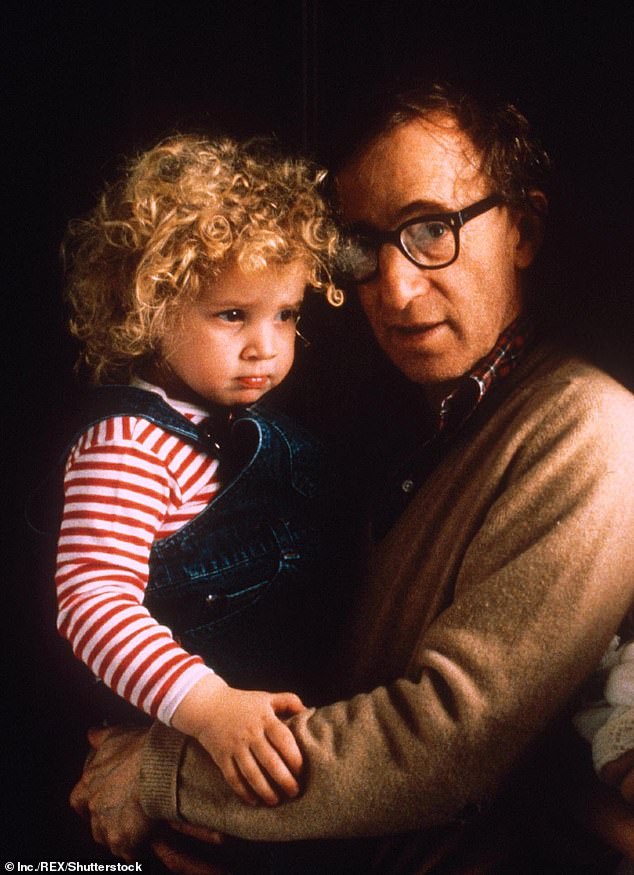 Dylan, now 35, was seven years old when she first told her mother Mia Farrow that Allen, her mother’s boyfriend of 10 years who had adopted her as a child, had sexually abused her after taking her into an attic. Pictured, Woody Allen with Dylan in 1988

Dylan has also distanced herself from Allen, saying, ‘I don’t feel like I have a father.’

Allen has vehemently and repeatedly denied molesting Dylan and has pointed to investigations that cleared him of wrongdoing. Criminal charges have never been filed.

Dylan first came forward about Allen in 1992, the same year that news of Allen’s affair with his adopted daughter Soon-Yi Previn made headlines. The pair went on to marry in 1997.

‘There’s no support group for people whose sisters marry their fathers,’ Dylan said. ‘Or is he my brother-in-law? And is she my stepmom? I’ve got to joke about it!’

The accusations led to a viscous – and very public – custody battle.

Experts from the Yale-New Haven Hospital Child Sexual Abuse Clinic, who interviewed Dylan nine times in the seven months after the accusations were first made, concluded Dylan was not sexually abused and that she had either made it up or had been encouraged by her mother.

The judge in the case called into question the researchers methods. Their findings are also re-examined in an upcoming four-part documentary series ‘Allen v. Farrow’, which features footage of seven-year-old Dylan accusing Allen.

Some continue to doubt Dylan and she said she still receives messages from Allen’s fans on Twitter, who say the abuse never happened. 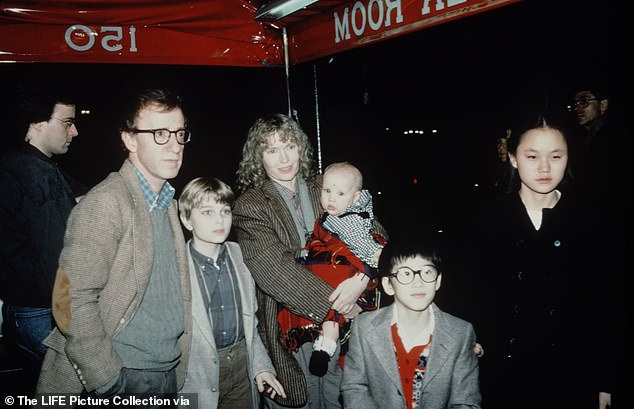 Woody Allen and Mia Farrow with their children, including Soon-Yi Previn, who Allen married in 1997

Mia was granted full custody of Dylan in 1993 and moved her whole family to the same Connecticut farm where they have spent lockdown.

Dylan, now a mother of four-year-old daughter Evangeline, said she was largely able to move on from the court case.

‘I sort of treated it as out of sight, out of mind, and I did that for about 20 years,’ she said. ‘But then he was up for an Academy Award, and no one cared.’

That was in 2014 when Blue Jasmine was nominated for three Oscars, including a Best Screenplay for Allen.

Against the advice from her therapist and loved ones, Dylan decided to write a New York Times essay about the abuse that called out the Hollywood stars who continued to work with Allen – Cate Blanchett won the Best Actress Oscar for Blue Jasmine that year – despite the allegations.

In 2017, in the wake of the #MeToo movement, in which her brother Ronan was a central figure, she wrote a second essay, for the Los Angeles Times, which questioned once again how Allen was still able to make movies when others like Weinstein had been stopped. 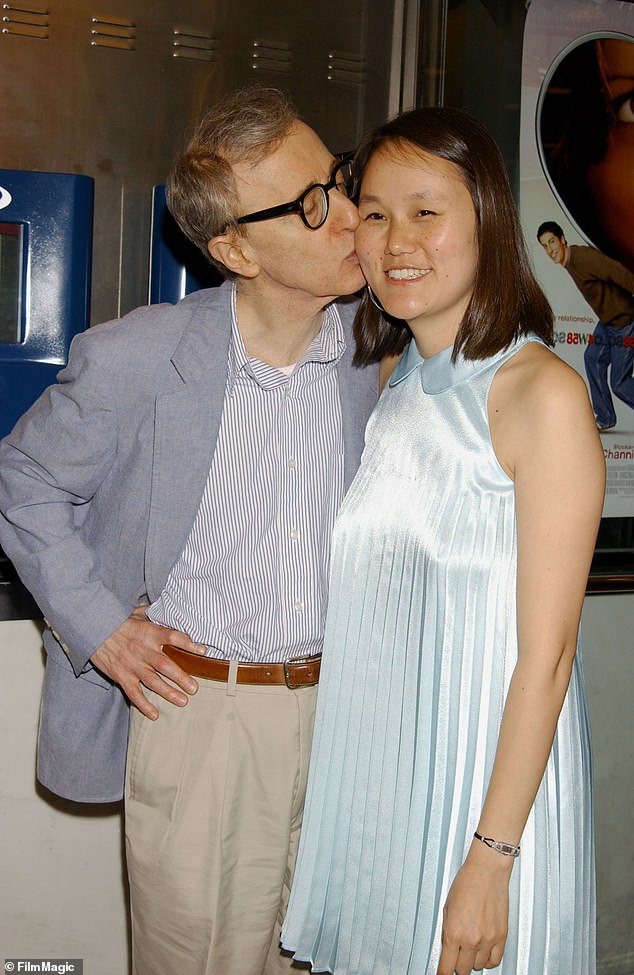 Mia and Allen split after Mia discovered naked photos of her then 21-year-old adoptive daughter Soon-Yi in Allen’s apartment. Allen and Soon-Yi are now married

She explained it was like finally giving a voice to her younger self.

‘[At age seven,] I wasn’t, obviously, given a platform, and I was not in an emotional state to take advantage of a platform. I was literally a child,’ she said.

‘And it’s easy when you are a white man with a considerable amount of clout, power, and wealth to silence a voice like that, pin the blame on my mom, and spin the story for 20-plus years.’

She continued: ‘I guess I’m just way more vindictive than anybody gave me credit for. And I say that because it’s not entirely a bad thing. Vindictive women can get stuff done.’

The court case between Farrow and Allen, and the allegations that triggered it, are to be explored in an explosive new four-part HBO documentary series.

‘Allen v. Farrow’ delves into one of Hollywood’s biggest scandals, drawing on home movies, police evidence, court documents and recorded conversations to explore the allegations, including a taped recording of a then seven-year-old Dylan accusing her father.

The tape has been the source of much debate with some citing it as evidence of the abuse and others as evidence Dylan was led by Farrow to make the accusations.

‘It took a long time for Dylan to feel comfortable and safe sharing that video. And once she shared it, there were parameters about whether she would be OK with us actually using it,’ filmmaker Amy Ziering told the New York Times.

‘It was incremental. We are not about contributing to anyone else’s pain.’

In his 2020 memoir, Allen again denied abusing his daughter.

He said he ‘never did anything to her that could be even misconstrued as abusing her; it was a total fabrication from start to finish.’

The same memoir had been dropped by its original publisher Hachette after staff staged a protest against it. Dylan thanked the staff who ‘took a stand.’

She has maintained that she was abused and her allegations have been embraced in the #MeToo era.

Two separate investigations were conducted in the 1990s and no charges were brought against Allen.