It’s been dubbed “aggressively nice” by New York Magazine, has boosted tourism in parts of Canada and even served president Justin Trudeau with a genius bit of soft diplomacy, when he took Ivanka Trump along on a date to the theatre.

Perhaps it’s a miracle that the musical Come From Away made it to Broadway at all – it’s only the fifth original Canadian musical to do so – let alone to London and, next month, Melbourne, for its Australian debut at the refurbished Comedy Theatre.

But the production, based on the remarkable true story of what happened on the remote Canadian island of Newfoundland when 38 planes – and their 6600 passengers and crew – were diverted there in the wake of the September 11 terrorist attacks, became a sleeper hit from humble beginnings.

“When we first started this, we hoped that Canadian high schools would be forced to do it because it would be a historical piece and there were lots of characters that all the kids could play,” says David Hein, who co-wrote the musical with his wife Irene Sankoff.

“Those were our big ambitions. But what we’re seeing now is that it’s a universal story.” 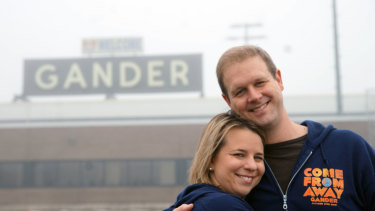 Irene Sankoff and David Hein, the wife and husband team behind the hit musical Come From Away.

A dogged theatre producer, Michael Rubinoff, heard about the good people of Gander, Newfoundland, and was convinced their story should have a second life as a musical: the heartwarming tale of a town whose population increased by more than half overnight, and the locals who fed and sheltered thousands of strangers. Enduring friendships were made along the way.

The idea was passed up by five writing teams, says Hein, before he and Sankoff said yes. “We agreed that the story was great and it resonated with us emotionally,” he says. They had written one musical together before: My Mother’s Lesbian Jewish Wiccan Wedding. (Also based on a true story, if you’re wondering.)

Hein had also grown up on Newfoundland folk music, which is as rich in Celtic influence as Newfoundlanders’ discombobulating accent. Jostling fiddles and forthright rhythms abound in the musical’s contemporary folk-rock score.

“The music is in the DNA of everyone who lives [in Newfoundland],” says Hein, originally from Saskatchewan, Canada. He and Sankoff are now based in Toronto, but were living in New York during  September 11.

“Everyone plays three instruments at least. It’s how they’ve survived … because their winters are terrible. They’re living on a rock in the ocean and they get snow two storeys tall. They dig their way out and they get to each other’s kitchens and they party and sing songs and tell stories. They survive by coming together as a community and staying warm.” 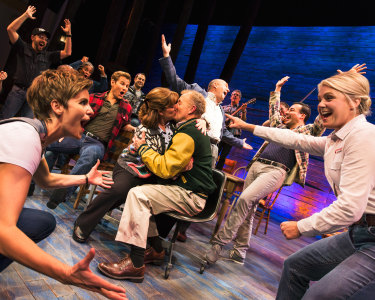 A scene from the Broadway production of Come From Away.

That Come From Away succeeds in bottling some of the Newfoundladers’ generous spirit is evidenced by the critics, who have variously described the Broadway and West End productions as a “warm group hug” (The Observer) and a “big bearhug” (The New York Times). The Washington Post said it was “an antidote for what ails the American soul” and a “reminder of … who we are all meant to be”.

But a September 11 musical was always going to have its share of controversy and some have responded with scepticism. Along with calling it ''aggressively nice'', New York Magazine also said it was “teeth-grindingly sweet” and “borrows our tragedy for 100 minutes of Canadian civic boosterism”. The Telegraph accused it of “glossing over” the trauma of  September 11.

Sankoff and Hein are philosophical, if a little bemused, about that line of criticism. “I think sometimes people think they’re protecting survivors and the family members of the people who were lost that day,” says Sankoff.

From day one, they trod carefully, opening a dialogue with those directly affected and testing out different audiences. “Very early on we had people from New York seeing early workshops,” Sankoff says.

“We did not want to traumatise people watching it. We’re all traumatised enough with the way the world has changed over the past 18 years.”

By and large, the response has been one of embrace. “So many survivors and family members have told us over and over again that they’re so glad we’re telling it,” Sankoff says. (They have staged free shows especially for survivors and families of victims, as well as benefit shows in Newfoundland.)

“They call it ‘their’ show, and you know what? Don’t argue with them.”

The pair interviewed hundreds who were on the ground in Gander during those surreal five days and, says Hein, they had to “tone down” some of the content – but not in the way you’d expect. “The really wonderful, positive things, we actually couldn’t put them in the show because we knew they were going to make people’s teeth hurt,” he says.

“You couldn’t do that in a musical … Which is why, very early on, we realised we needed to use real stories, because it’s going to get challenged. Even the real stuff [now] gets challenged.”

Some of the characters in Come From Away are composites of real people, such as the Newfoundland school teacher-cum-emergency management officer Beulah Davis. The fate of a Muslim character, Ali, seems to attract all the anti-Islamic fear that proliferated in the West post-September 11. Stranded in a foreign country, alone, with no idea what’s going on, he is met with suspicion, racially profiled, publicly humiliated by airline staff and then strip searched.

He, too, is a composite – of not just a couple, but several stories.

The tragedy of September 11 is always looming in the background, “so you don’t need an antagonist in the story," says Hein.  "Because we all had that [on the day].”

The show’s producers, Junkyard Dog Productions and Australia’s Rodney Rigby, had a hunch the story would resonate beyond Canada and the US. They were right. After opening in London in February, Come From Away went on to scoop four Olivier awards including Best New Musical and Outstanding Achievement in Music, adding to the Tony it won on Broadway for Christopher Ashley’s direction.

Come From Away is now in its third year on Broadway. Hein and Sankoff are working on a screenplay for a film adaptation and there are five companies around the world (including Melbourne) staging productions.

Melbourne’s mostly Australian cast includes Simon Maiden, Sarah Morrison (Ladies in Black), Richard Piper, Emma Powell (Kinky Boots, Priscilla) and Kellie Rode (Mamma Mia!). Joining them on opening night will be 26 special guests, all of them Gander locals and "come from awayers" whose stories were instrumental in the creation of Come From Away.

“The joy of doing the show is that every single opening, we get to fly the real people out,” says Hein, “and not only bring them on stage and celebrate them for what they say is ordinary – and clearly they’re getting standing ovations, and the world is saying this is extraordinary – but also they get to have this amazing reunion.”

If that’s what aggressive niceness looks like, I say bring it on.

Come From Away opens at the Comedy Theatre on July 3. Hannah Francis travelled to London as a guest of Come From Away.