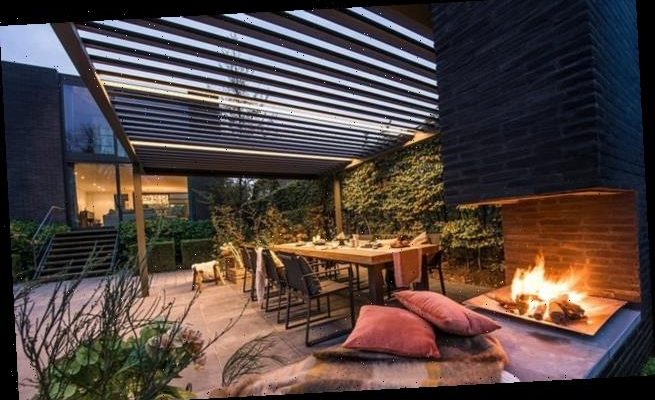 Lockdowns aren’t easy for anyone, but for those one in eight UK households who have no access to a shared or private garden, they’ve been near impossible.

The good news is that a growing number of developers have found a solution to the problem: roof gardens.

‘I think it should be made a planning condition that roofs are utilised as a green space,’ says the award-winning garden designer Manoj Malde, (manojmaldegardendesign.co.uk).

High life: Roof gardens have become ever more popular during the pandemic

‘Roof gardens can be incredibly beautiful; the air seems fresher up there, transporting you to another world.’

Pocket Living, a developer specialising in selling affordable one-bedroom homes to first-time buyers, believes that access to a garden benefits its residents’ mental health. Although its apartments measure only 38 sq metres inside their sites, all offer some shared outside space.

‘My roof garden definitely helped me get through the lockdown,’ says IT sales executive Lucy Wright, 30, who has lived in Pocket Living’s Wandsworth development for two years.

‘Like millions of others, I have been working from home for most of the year and after a day in front of my computer screen it was great to get out on the roof and meet others over a glass of wine at a social distance.’

It’s not only in overcrowded London that you find new roof gardens being built. In the heart of Maidenhead in Berkshire, the Waterside Quarter, due to be finished this month, is a development of one to three-bedroom apartments with a roof garden of astro turf and planters. Prices start at £315,000 (shanlyhomes.com).

On the market… with terraces 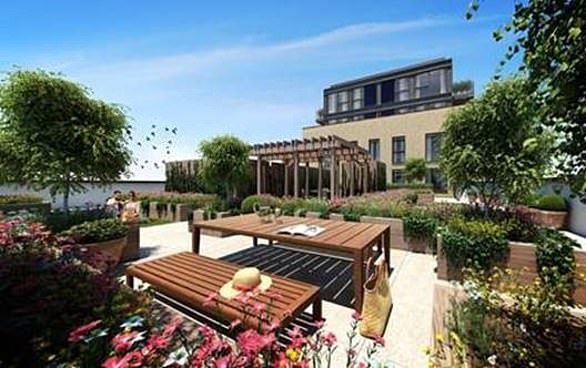 London: There are one, two and three-bedroom homes at The West Works in Southall, which features podium gardens. Redrow.co.uk, From £311,000 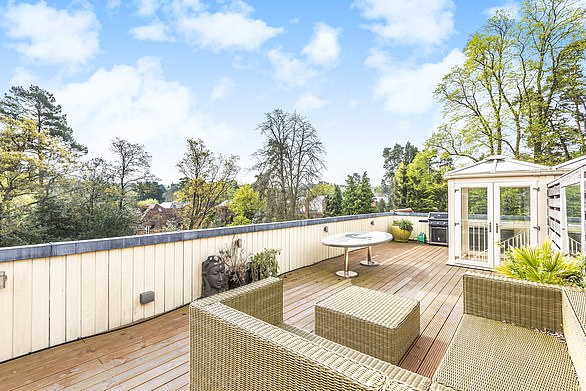 Berkshire: This two-bedroom apartment is at Brockenhurst House near Ascot. It has a roof terrace with great views. Knightfrank.co.uk, £2,850 a month 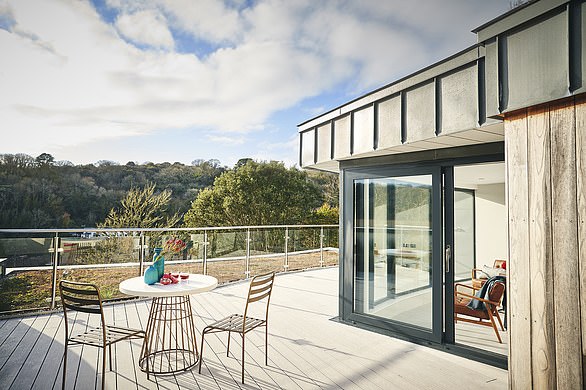 Devon: The Yealm development in Newton Ferrers is a former hotel with two and three-bedroom flats with terraces or balconies. Marchandpetit.co.uk, from £1.15m

In King Street, central Manchester, boards have been laid on the roof garden for the conversion of four townhouses from £574,000 (oxygenmanchester.com).

Cutting-edge though the best of today’s roof gardens may be, they became particularly fashionable in the early 20th century. ‘Selfridges were early pioneers, with a roof-top garden built in 1921,’ says Sean McEntee, an expert with Savills planning. ‘Kensington Roof Gardens, built in 1938, are grade II-listed.’

Today, roof gardens can vary in quality from a few plant pots and a deck chair above a shop in a run-down part of town to extravagant oases overlooking the kind of streets where only the mega-rich can afford to live.

A six-bedroom property in the heart of Kensington is for sale for £24 million (knightfrank.com). Apart from offering leisure facilities indoors — cinema, bar, swimming pool and gym — the landscaped astro turf roof garden has seating set around an ornate fireplace, surrounded by hedging. But what is the attraction of a roof garden to the ultra wealthy?

‘They provide greater privacy and security,’ says Fran Moynihan of Savills (savills.com). ‘Even in a densely populated area they are unlikely to be overlooked.’

Although roof gardens undoubtedly add value to a property, they need a good deal of planning. Manoj Malde advises to check that the construction of the roof is strong enough for load bearing.

D rainage is an issue, as you don’t want the roof leaking into the rooms below. If your neighbours also have a roof garden, then you may want screening for privacy. Safety is paramount, so make sure there is a barrier to stop people, plant pots or garden furniture from falling over the edge. The choice of plants, too, is a complex subject.

Maggie Hall had to address all these problems when she built a bijou roof garden, above her four-storey townhouse in the fashionable Spice Island district of Old Portsmouth, 20 years ago. Being within yards of the waterfront, the roof garden catches the full force of the weather from the English Channel.

‘We decked it, put up railings and laid out pots and hanging baskets that we could take in quickly if the weather turned nasty,’ says Maggie, 56, who is selling the house for £780,000 (fryandkent.com). ‘The views over the Spinnaker Tower and Portsmouth Harbour are fantastic.’