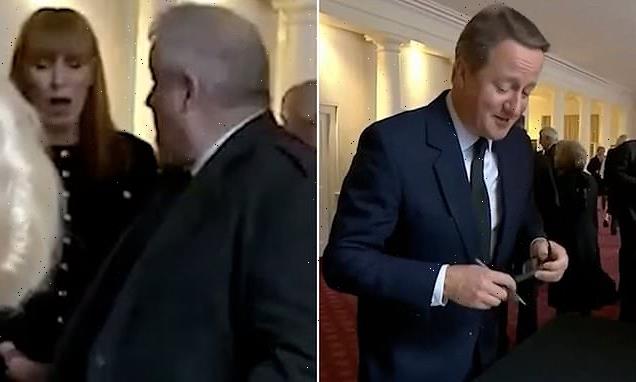 The lighter moments of the accession! SNP’s Ian Blackford steps on Angela Rayner’s foot while signing the proclamation – while David Cameron jokes ‘he needs to put his glasses on’

The antics were spotted while MPs signed the royal proclamation that recognised Charles III as king.

As Mr Cameron approached the paper, he could be seen gesturing with his glasses, adding: ‘I need to put my glasses on so I can see what I’m doing’.

Meanwhile Mr Blackford could be seen chatting to the deputy Labour leader Mrs Rayner after he accidentally stepped on her foot in the line.

It was the first time a monarch’s Accession has been broadcast and cameras were fixed on the MPs as they lined up to sign their names. 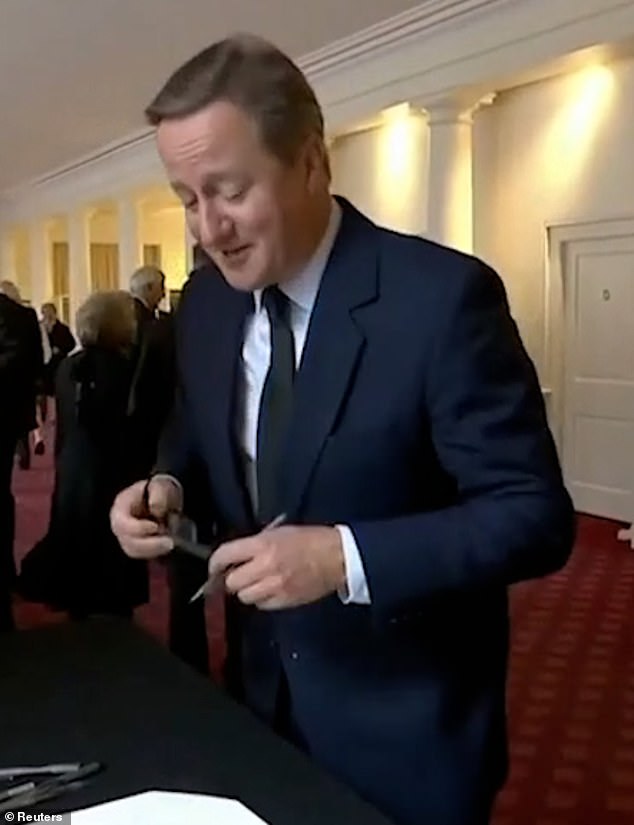 He signed his name and thanked the officials off-camera before walking away and speaking with one-time Tory leadership hopeful Kemi Badenoch.

Meanwhile, Westminster SNP leader Mr Blackford appeared to run out of ink as he was signing his name, as he chatted to Conservative MP Andrea Leadsom.

He found a pen that worked and continued to sign the rest of his name before turning around and stepping on Deputy Labour Leader Angela Rayner’s foot. 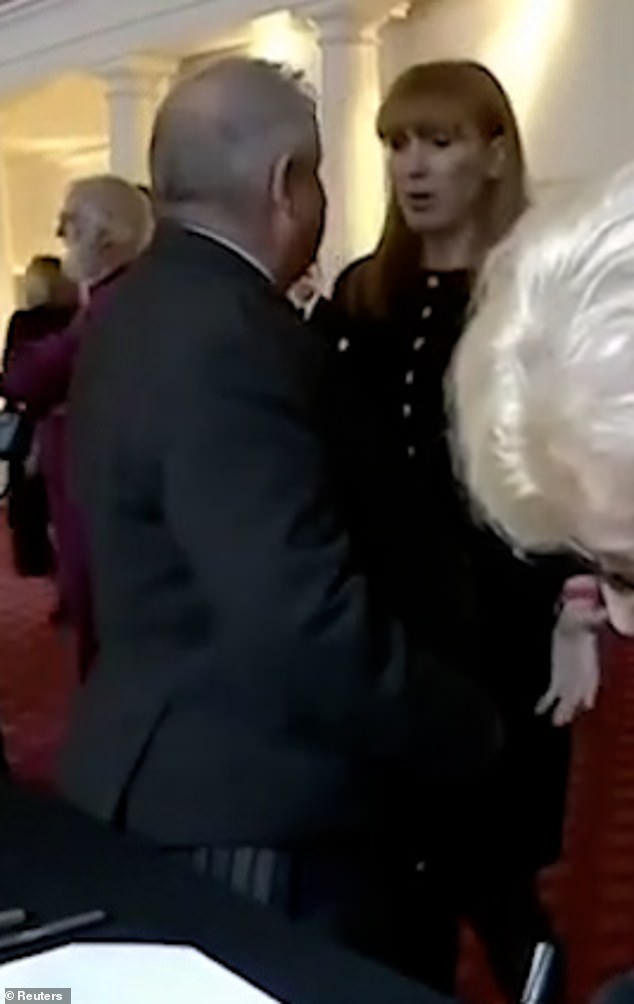 She emitted a yelp of pain before Blackford seemed to apologise to her.

The pair smiled together before Mrs Rayner stepped up to sign her name.

It came after King Charles III made a personal declaration on the death of his beloved mother Queen Elizabeth II today.

He vowed to uphold ‘constitutional government and to seek the peace, harmony and prosperity of the peoples of these islands, and of the Commonwealth realms and territories throughout the world’. 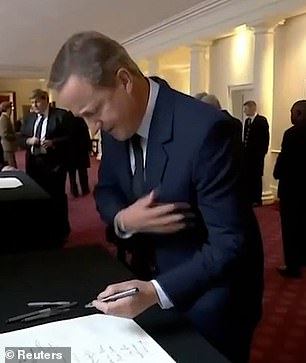 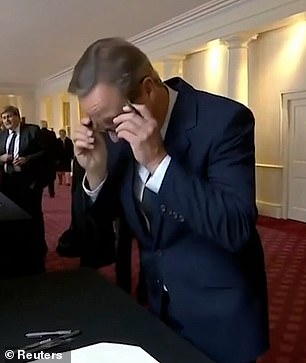 Former PM Mr Cameron was about to sign his name when he reached for his glasses (left). He joked that he needed them to see what he was doing 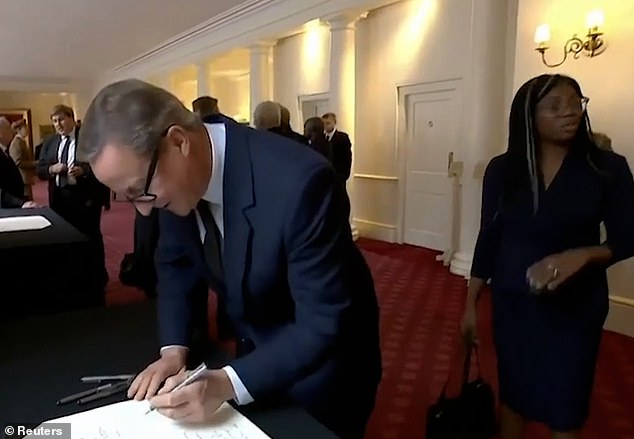 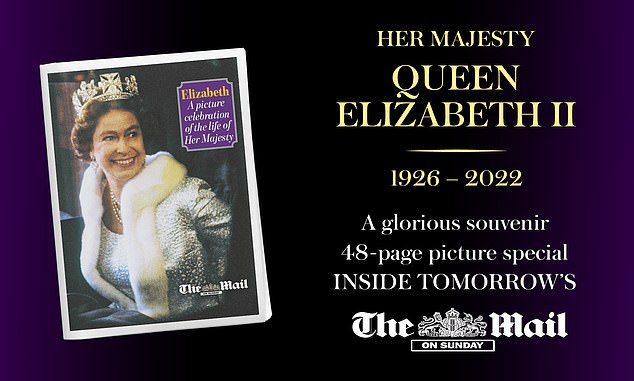 Although Charles automatically became Sovereign on the death of his mother, the Accession Council – an ancient body of advisers that dates back as far as the time of the Norman Conquest – formally announced his role as Head of State today.

Broadcast cameras were allowed into the historic event giving the world a first glimpse of an ancient ceremony dating back centuries – and one of the first changes to convention instigated by the new King. 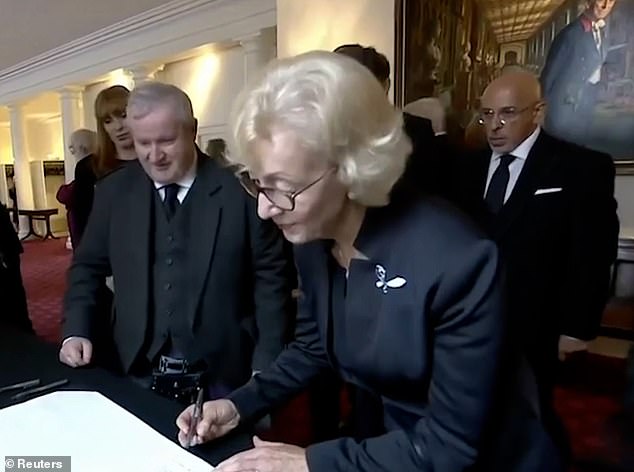 Ian Blackford, the SNP leader in Westminster, was signing his name alongside Tory MP Andrea Leadsom 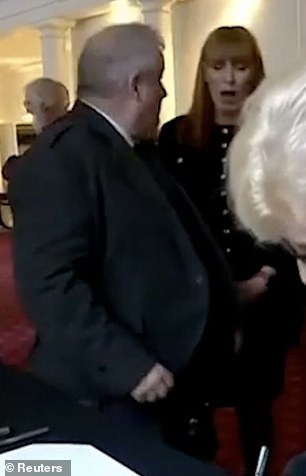 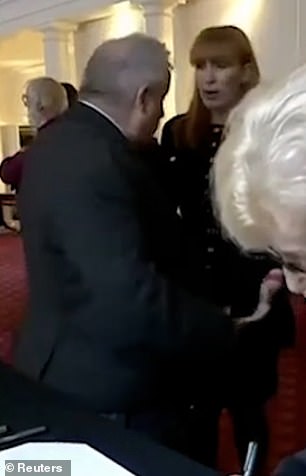 Blackford turned around and accidentally stood on Angela Rayner’s foot (left). She let out a yelp and cried ‘ouch’ before the pair made up

At 11am, trumpets sounded from the balcony of St James’s Palace as the Principal Proclamation announcing the King was read out.

Around 1,000 people gathered outside the Palace as the King was officially proclaimed Sovereign of the United Kingdom of Great Britain and Northern Ireland, including Supreme Head of the Church of England and Commander-in-Chief of Britain’s Armed Forces and Head of State of the Commonwealth and British territories around the world.

Gun salutes at Hyde Park, the Tower of London, Edinburgh Castle, Hillsborough Castle and Cardiff Castle were then fired before the National Anthem was performed by The Band of the Coldstream Guards alongside eight State Trumpeters of the Household Cavalry. 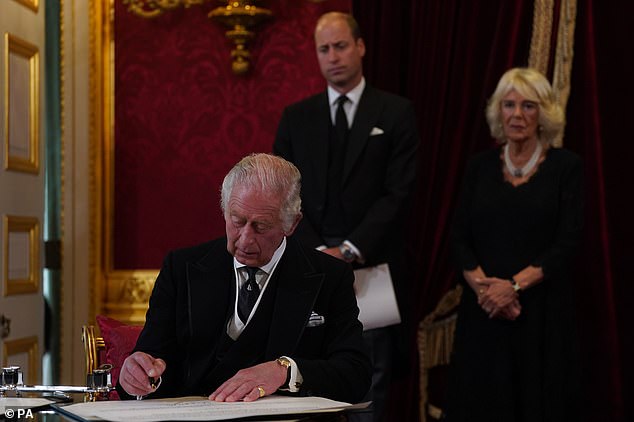 King Charles III signs an oath to uphold the security of the Church in Scotland during the Accession Council at St James’s Palace, London 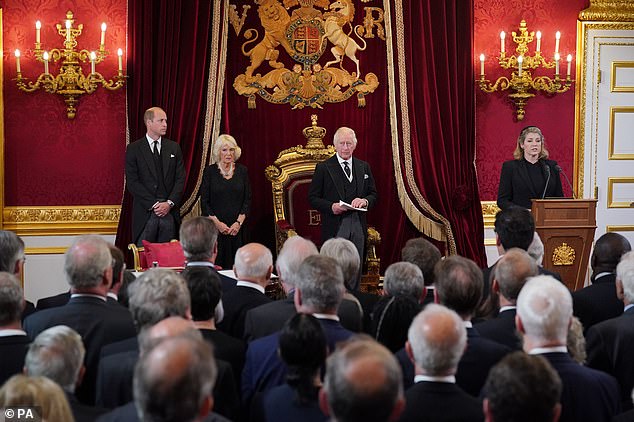 The Prince of Wales, the Queen, King Charles III and Lord President of the Council Penny Mordaunt during the Accession Council at St James’s Palace

They were accompanied by the St James’s Palace Detachment of The King’s Guard made up of Number 7 Company Coldstream Guards.

The crowd of well-wishers joined the King’s Guard gathered outside the palace in three cries of ‘hip hip hooray’ for the King.

On a balcony above Friary Court in St James’s, David White, the Garter King of Arms, read the proclamation.

He ended by saying it was ‘given at St James’s Palace this 10th day of September in year of our Lord 2022.’  In the moments after, ‘God save the King’ was shouted out.