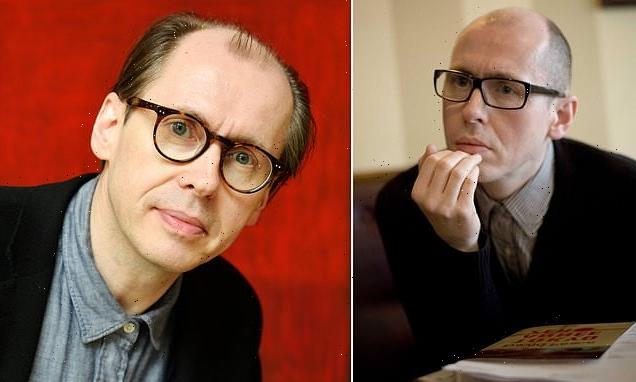 Novelist David Peace has become the latest renowned author to slam publishing’s sensitivity crisis as he said novelists have ‘a responsibility to push boundaries.’

The 55-year-old, who lives in Tokyo, has penned  11 novels, including The Damned Utd, which was made into a film with Michael Sheen in the lead role as Brian Clough.

Speaking to The Guardian, he said: ‘Publishers should be less risk-averse…if novels are going to survive, novelists have a responsibility to push the boundaries.’

His comments come after a number of critically-acclaimed authors spoke out on cancel culture within the publishing world. 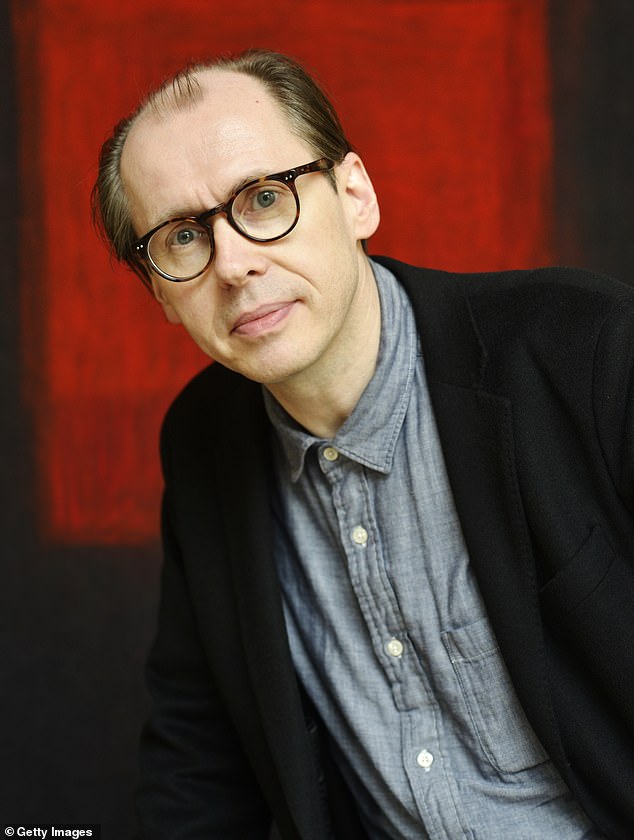 Novelist David Peace, 55, who lives in Tokyo, has become the latest renowned author to slam publishing’s sensitivity crisis as he said novelists have ‘a responsibility to push boundaries’

Art Spiegelman, 74, who penned the Pulitzer Prize-winning graphic novel Maus about the Holocaust, saw his book banned by a Tennessee school district over a few curse words and a nude image earlier this year.

Meanwhile Atwood, 81, saw her a graphic novel version of her critically-acclaimed book The Handmaid’s Tale removed from classroom libraries in a Texas school district in December.

Speaking to The Guardian, Atwood said there was a form of moral hysteria around upsetting children, adding: ‘They’re playing woke snowflakery back: [by saying] ‘This might upset people’.’

Spiegelman, who wrote the poignant tale about his parents’ survival against Nazi atrocities, said culture surrounding books had become ‘the most Orwellian version of society I’ve ever lived in.’ 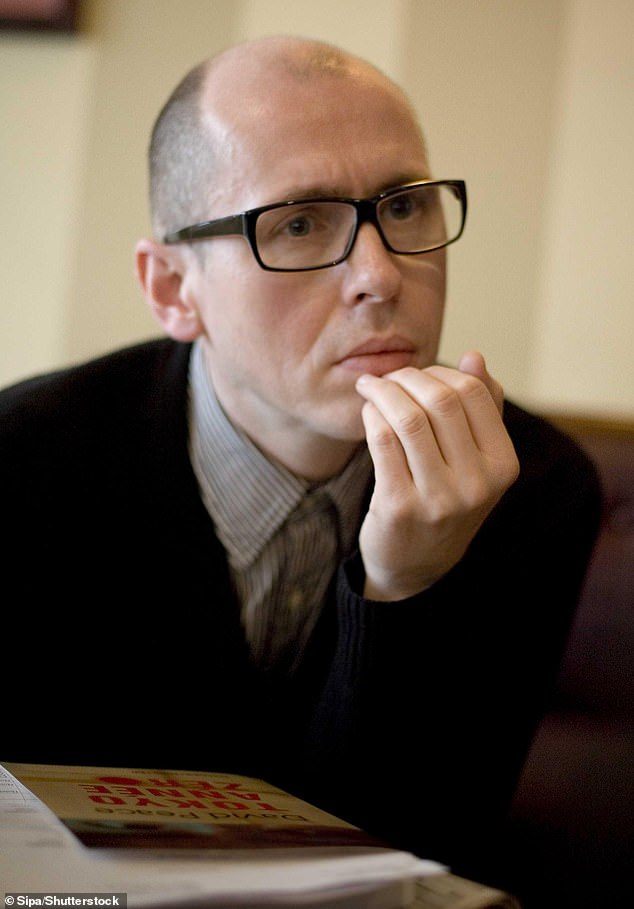 David, who has penned 11 novels, including The Damned Utd, said publishers should be ‘less risk averse’

He explained: ‘It’s not as simple as left v right. It’s a culture war that’s totally out of control.

‘As a first-amendment fundamentalist, I believe in the right of anyone to read anything, provided they are properly supported.’

Last month, the McMinn County School Board in Tennessee voted to remove Maus from its curriculum due to ‘inappropriate language’ (eight swear words) and its ‘not wise or healthy’ content.

The book includes an illustration of a nude woman, according to minutes from a board meeting. 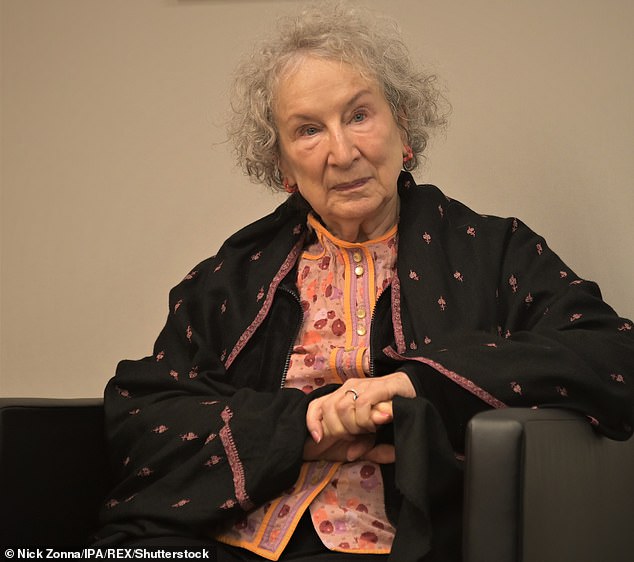 Margaret Atwood, 81 and Art Spiegelman are among the renowned authors who have slammed publishing’s sensitivity crisis as they called it ‘a culture war that’s totally out of control’ (pictured, Atwood) 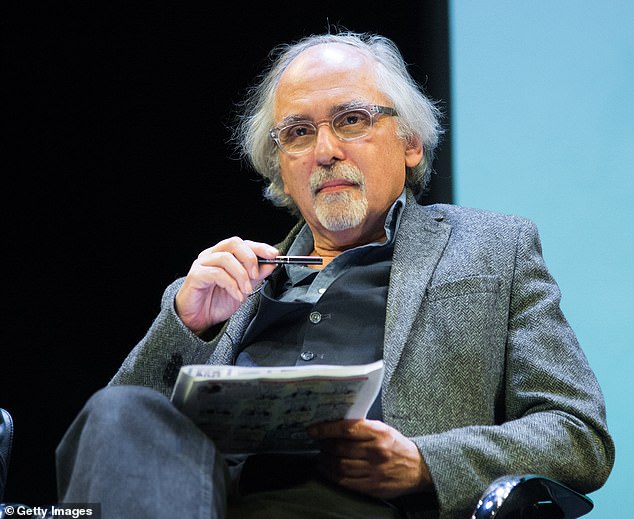 Spiegelman, 74, who penned the Pulitzer Prize-winning graphic novel Maus about the Holocaust, saw the book banned by a Tennessee school district over a few curse words and a nude image earlier this year

The McMinn County Board of Education voted 10-0 to remove Maus on January 10, despite educators arguing that the graphic novel is an ‘anchor text’ in eighth-grade English language arts instruction and the centerpiece of a months-long study of the Holocaust.

Published in 1991, Maus is inspired by the story of Spiegelman’s parents, Vladek and Anja, who survived the Holocaust after being shipped to Auschwitz concentration camp in Poland. The graphic novel depicts Nazis as cats and Jewish people as mice. 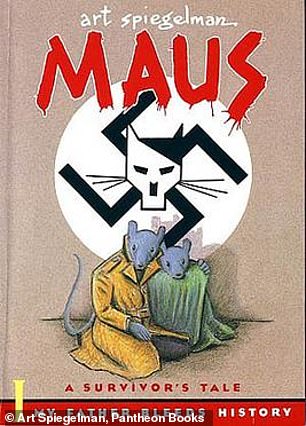 Spiegelman, who wrote the poignant tale about his parents’ survival against Nazi atrocities, said culture surrounding books had become ‘the most Orwellian version of society I’ve ever lived in’

The Tennessee board’s decision came amid a wave of conservative-sponsored legislation and other actions to pull books from schools, with other banned works including Toni Morrison’s The Bluest Eye and Harper Lee’s To Kill a Mockingbird.

Earlier this year, author Anne Tyler, 80, slammed cancel culture in a new interview, while insisting that she ‘should be allowed’ to write a book from the ‘viewpoint of a black man’ without being accused of appropriation.

The author from Baltimore, has sold ten million books during her 50-year career, including her best-selling novel Accidental Tourist, which was turned into a major Hollywood movie in 1988 starring William Hurt and Kathleen Turner, and her latest release French Braid, which comes out on Tuesday.

However, the writer – who won the Pulitzer Prize in 1989 – says she has been left horrified by the way in which the industry has changed in recent years, calling particular attention to the negative impact that ‘cancel culture’ has had on literature.

‘I’m astonished by the appropriation issue,’ she told The Sunday Times. ‘It would be very foolish for me to write, let’s say, a novel from the viewpoint of a black man, but I think I should be allowed to do it.’

The author added that the misdeeds or crimes of writers should not lead to their works being pulled from shelves, using 19th century artist Paul Gaugin – who reportedly had sex with and fathered children with underage girls. Despite Gaugin’s controversial personal life however, his paintings continue to be exhibited in museums around the world. 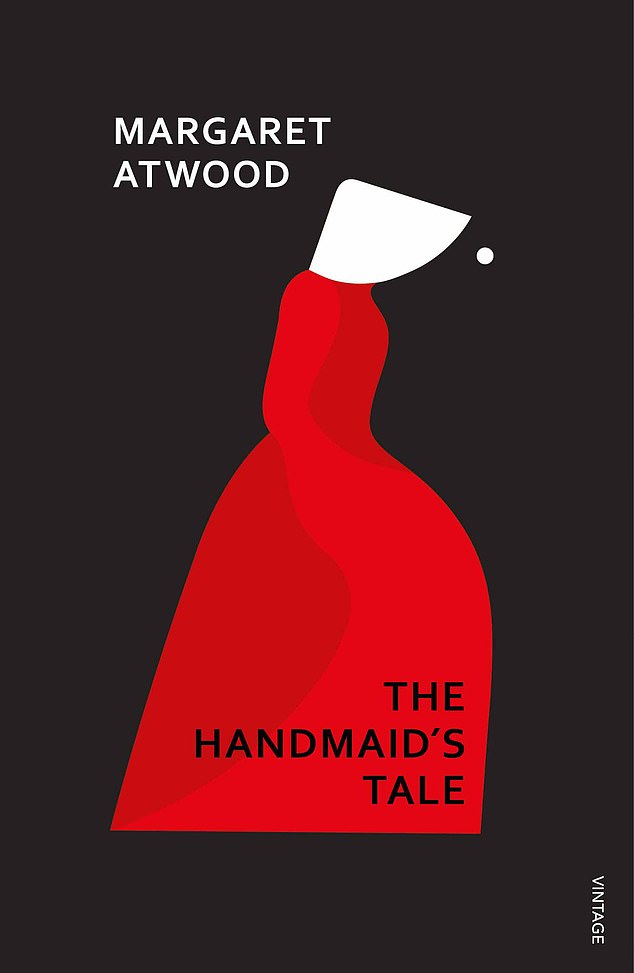 According to Tyler, authors should receive the same treatment.

‘If an incredibly talented person has written novels in the 1930s or 40s and all of a sudden it is discovered that there was something he said or did — even something as bad as sexual harassment — he should be condemned for it but I don’t see why you should withdraw his novels from publication.

‘We couldn’t look at Gauguin’s paintings, could we? They would have to be destroyed or put away.’

Earlier this month, award-winning novelist Howard Jacobson said misogyny ‘is not a word that should be used about writers’ as he made a stand against publishing’s sensitivity crisis. 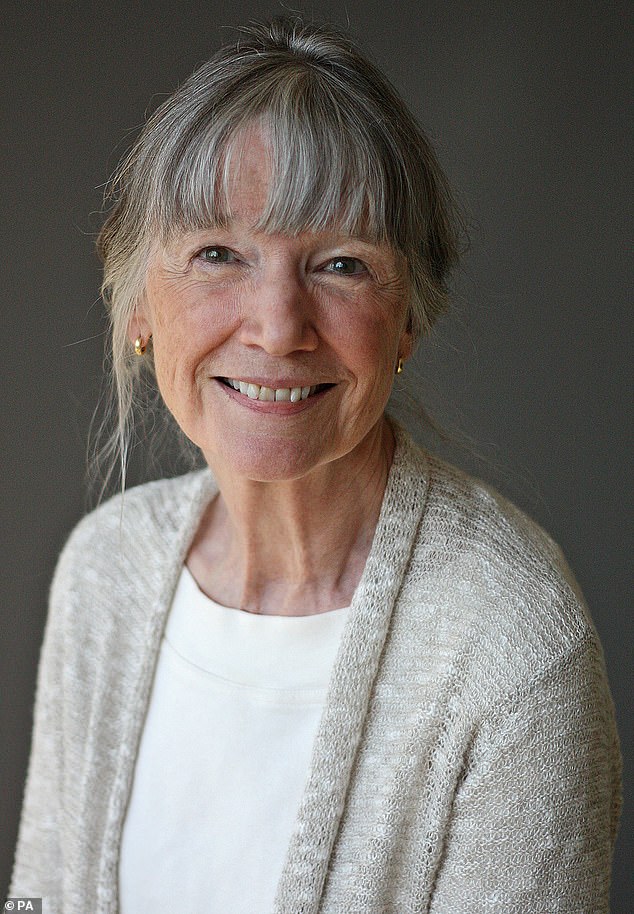 Baltimore-based author Anne Tyler, 80, who won the Pulitzer Prize in 1989, has said she is horrified by the implications of ‘cancel culture’ on literature

The 79-year-old, who lives in London, said he was repeatedly warned to ‘be careful’ when writing his memoir Mother’s Boy.

The author, who won the Booker Prize for The Finkler Question in 2010, said he was warned by his publisher that his book would make him seem ‘not very likeable’.

‘Dickens wrote novels that you could say are anti-Semitic – so what have you said? And a male writer is not obliged to like women.’

Meanwhile critically-acclaimed author Kate Clanchy, 57, from Scotland, has found herself at the centre of a cancel culture row over revising her memoir. 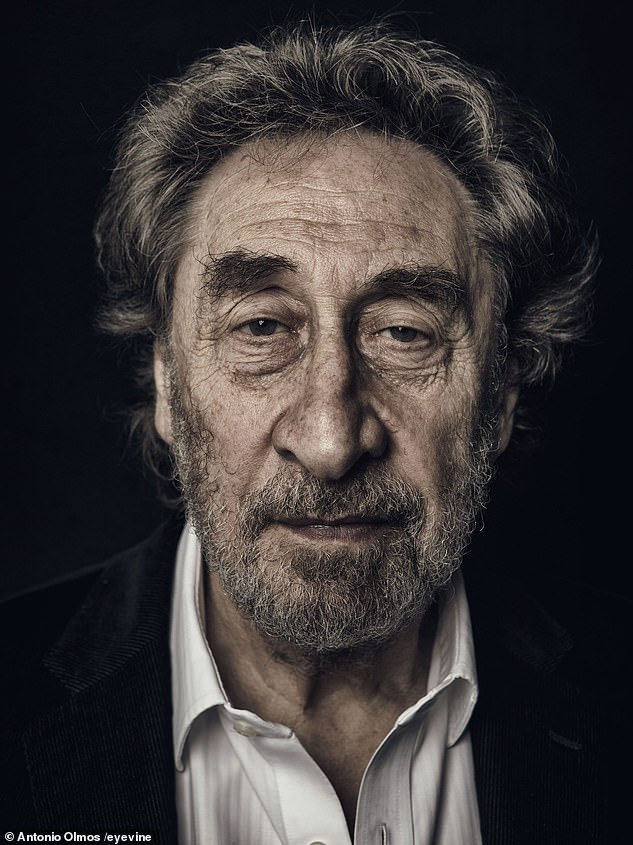 Novelist Howard Jacobson, 79, previously said misogyny ‘is not a word that should be used about writers’ as he made a stand against publishing’s sensitivity crisis

She revealed her former publisher Picador recruited ‘sensitivity readers’ to ‘detect and reform problematic racism and ableism’ in her Orwell Prize-winning book.

It came after the 2019 memoir about her life as a state school teacher was criticised for allegedly portraying some pupils in a racist manner.

Miss Clanchy, 57, said she was ‘horrified that people found prejudice and cruelty’ in the book and ‘went into the process’ of the memoir being scrutinised by the sensitivity ‘experts’ willingly.

Writing for website UnHerd, she said one focus group rated supposedly offensive words and passages on a scale of one to three.

She wrote: ‘One Reader fusspots around single words: I should not use ‘disfigure’ of a landscape (infraction level 3, as presumably comparing bings – spoil heaps – to boils might be harmful to acne sufferers). 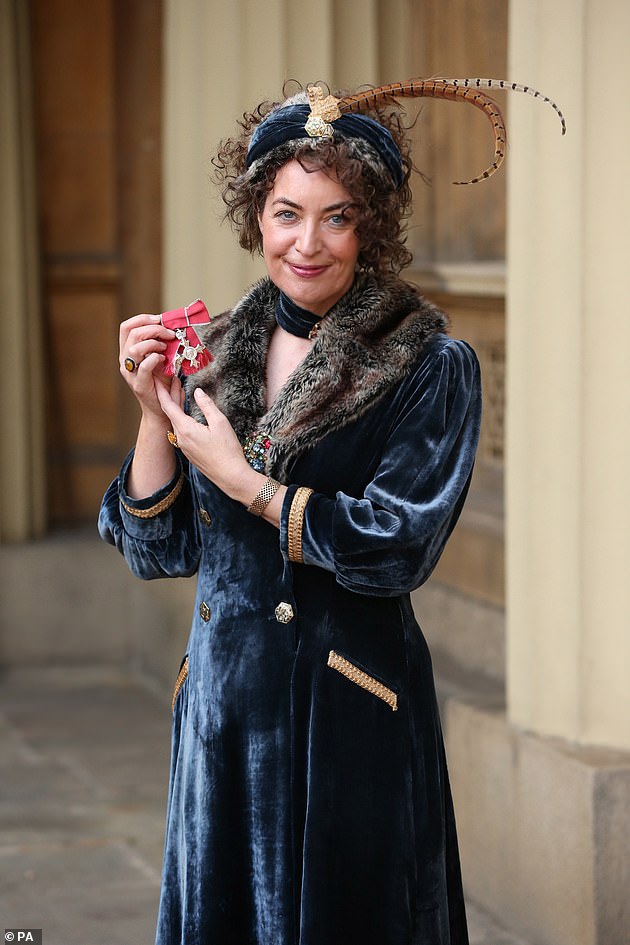 Kate Clanchy (pictured), who wrote Some Kids I Taught And What They Taught Me, revealed her former publisher Picador recruited ‘sensitivity readers’ to ‘detect and reform problematic racism and ableism’ in her Orwell Prize-winning book

‘Nor should I use ‘handicap’ in its ordinary sense of ‘impede’ (infraction level 2, serious); and I should prefer the acronym ‘SEN’ to its origin phrase, special educational needs, because it is more inclusive (infraction level 2).’

She added: ‘My Readers though, have not been hired as literary people. They are there to help create a book that would play better on Twitter, not one that is better written.’

Miss Clanchy, who was awarded an MBE in 2019, cut ties with Picador before the revised version of the book was published.

Swift Press has reissued it without the changes but with other edits.

Swift Press told the Daily Telegraph: ‘The only thing we wish to say is that minor revisions were made because Kate wished to make them.