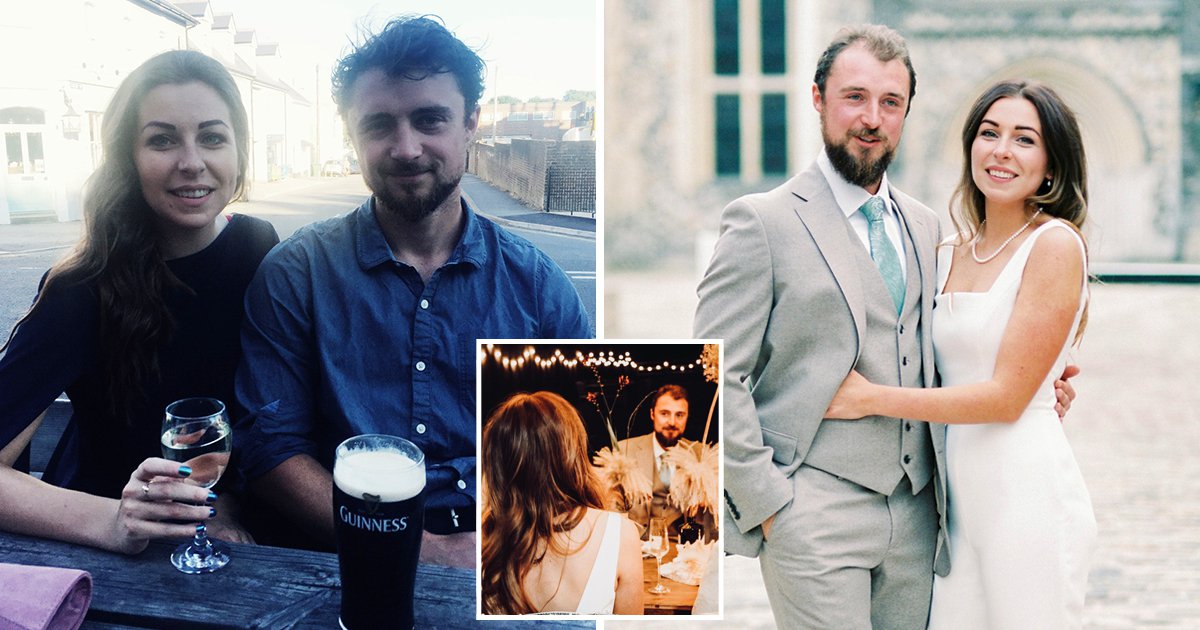 A couple whose big wedding celebration plans were dashed by the pandemic last year are finally able to have a proper celebration – with a party in a field where absolutely everything is supplied by local businesses within 20 miles.

When she gets to have a festival-themed wedding with Joshua, 29, this July, Stephanie White, 27, wants to do all she can to help people in her local area who have been affected by the pandemic.

‘Every single element’ of the big day will be locally sourced, Stephanie, a copywriting agency director, said.

‘Our caterers, photographers, marquee company are all based in places like Basingstoke and Winchester,’ she said.

‘I even commissioned my dress to be made by a local dressmaker from scratch.

‘The tearoom where I was working when Josh and I first met is making our wedding cake.’

Stephanie and Joshua, a project manager in construction, met when they were teenagers before they started dating five years ago.

The pair had a very scaled-down wedding ceremony with just six people – instead of the 130 they had planned – in September 2020.

Now, they are determined to celebrate their love locally when they get to party properly.

‘It’s a rural county, they rely on footfall of tourists and visitors for business, so I’ve seen so many businesses in our area really struggle throughout the lockdowns.’

Both grew up nearby – Joshua in Farnham and Stephanie in Alresford – and first saw each other in Tiffin Tearooms in Alresford in July 2012.

Stephanie said: ‘We met when I was working in a tearoom at 18 years old. Josh was 19, and was doing some building work behind the café.

‘He would come in and order takeaway coffee and I would, very embarrassed and red-faced, give him a coffee and then tell the girls after he left how cute I thought he was.

‘We didn’t actually start dating until five years ago, when I joined a dating app in the new year of 2017.

‘On January 3, Josh appeared on the app and I felt exactly the same way as I had when I was 18.

‘We matched and went on a date, and we’ve been together ever since.’

After three years together, in July 2019, Joshua popped the question after they had watched the sunset from St Catherine’s Hill in Winchester.

Stephanie said: ‘It was the spot where we’d had our second date and once the sun had set, he proposed to me.’

They decided to have their big day on September 5, 2020, and spent much of the rest of 2019 planning the wedding.

Stephanie said: ‘We both decided that we wanted the reception in a field with 130 guests to enjoy a festival-themed party.

‘Everything was booked and all of the deposits were paid when the pandemic hit. At first, I wasn’t too worried because everyone seemed to think it would blow over quickly.

‘It wasn’t until June that the reality of how long the pandemic was going to go on for actually hit.’

Ultimately, the pair held off on their original plans and went ahead with the legal ceremony at Winchester Registry Office.

Stephanie said: ‘It was literally just me and Josh, both our mums and dads and our two sisters to be witnesses.

‘I wore a jumpsuit from another local bridal supplier.

‘It wasn’t what we’d planned, but the day was lovely.’

After saying their vows, the two had a gathering – keeping to the 30-person limit – in the garden of their Winchester home.

‘It was just a lovely family get-together,’ Stephanie said. ‘We had home-made lasagne, with salad and garlic bread.

‘We kept family and friends separate to make it safer. So, we celebrated with family on our wedding day and the next day, we had our bridesmaids and grooms men round for curry.’

Now, Stephanie and Joshua will finally get to celebrate their special day, as restrictions have eased enough for the couple to go ahead with their outdoor festival-themed wedding on July 10 with 90 guests.

The flowers have been sourced locally in Selborne by Maia’s Flowers, the band, Dances With Wolves, is made up of Joshua’s groomsmen, and the cake is being made by the tearoom Stephanie was working in when she and Joshua first laid eyes on each other.

‘The food, prepared locally by Bark ‘n’ Render, is being handed out on little cardboard trays too to avoid members of staff repeatedly touching plates and crockery that other people have touched.’

Since the big day is going to be outside, Stephanie says she now feels it is safe to get excited.

‘We’re quite lucky because our wedding is outside, so we’re not as restricted as others,’ she said. ‘And now that it’s only a couple of weeks away, I feel like I can start to get excited for it.

‘I’ve been so worried that something would happen, so I haven’t let myself get my hopes up.

‘And while we’ve already technically tied the knot, it will be nice to finally go ahead with our original wedding and see all of our family and friends in one place.

‘It’s been a very stressful time for everyone involved, so we’re all looking forward to having something to celebrate.’