Building site chic! Couple quoted £25,000 for a summerhouse snap up a £3,000 steel container complete with electrics and transform it into a stunning garden retreat

A savvy family who were left shocked by the quotes they received to build a summerhouse in their back garden have revealed how they eventually decided to do it themselves – for a fraction of the cost.

Dawn Groom, 45, and her support worker husband Darren, 46, from Hertfordshire, were determined to create an amazing summerhouse for their daughter Lois, 13, who was born with a rare chromosome syndrome.

The couple decided to create their own using an industrial ex-site cabin, after receiving quotes for a wooden version that ranged from £16,000 to over £25,000. 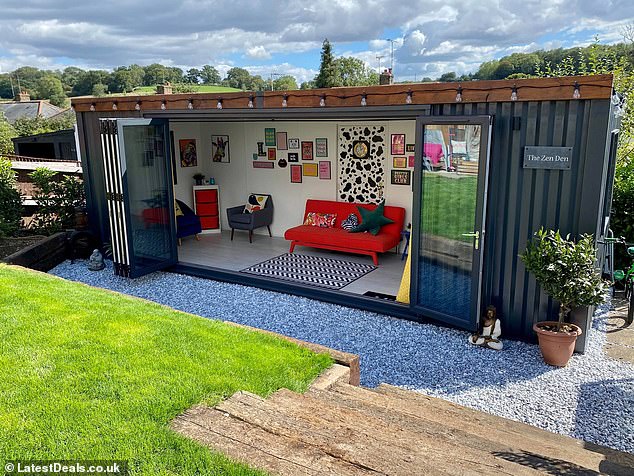 Dawn Groom, 45, and her husband Darren, 46, from Hertfordshire, impressed members of money-saving community LatestDeals.co.uk with their DIY summerhouse (pictured) 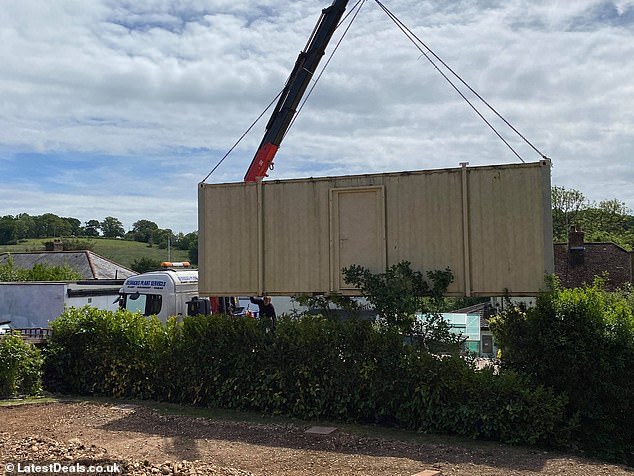 The couple who wanted a playhouse for their daughter Lois, 13, were quoted over £25,000 for a wooden cabin. Pictured: The summerhouse, before renovations 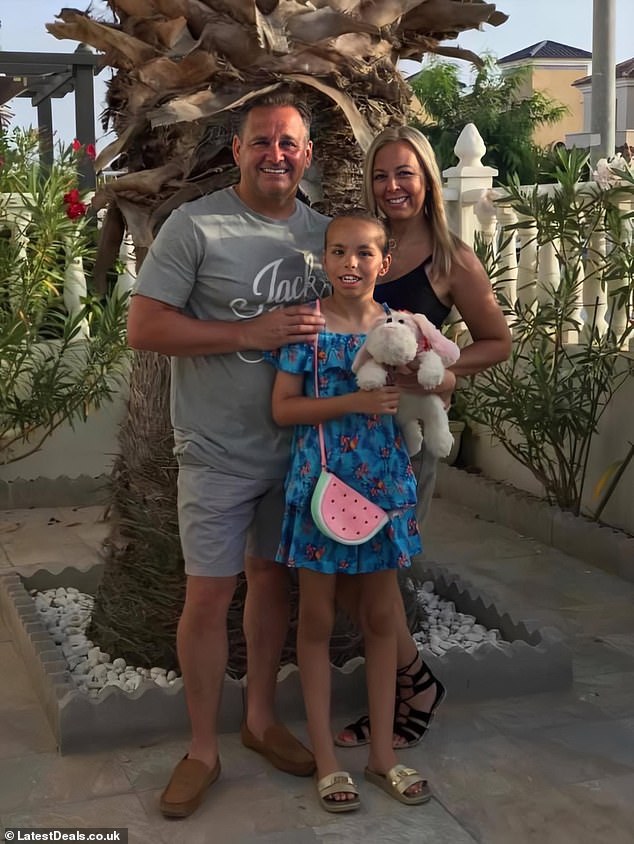 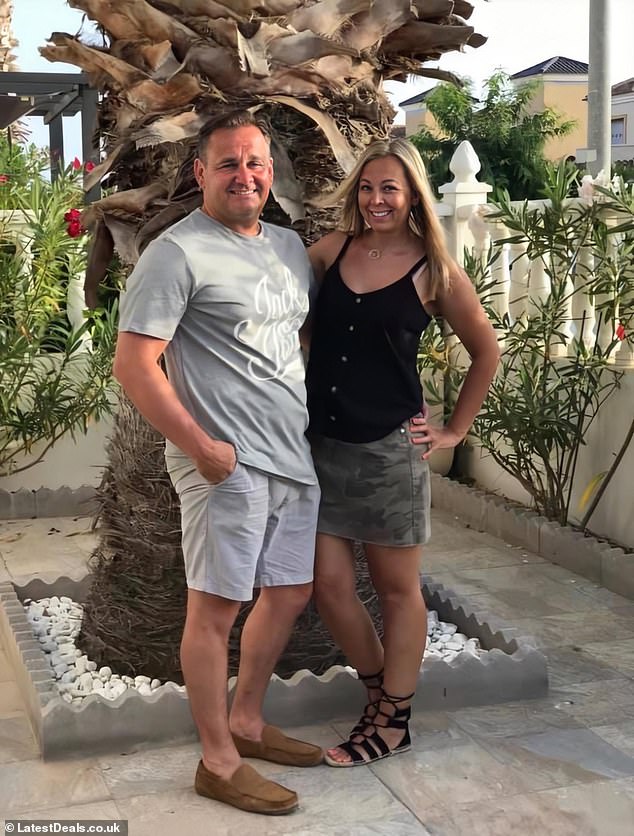 Dawn said their idea for an outdoor space for Lois, who has a rare chromosome syndrome, came from seeing her regularly sit outside. Pictured: Darren and Dawn

Having spent lockdown working on the project, enlisting help from friends and family, the couple managed to create a stunning, colourful space for Lois for £5,700.

Dawn who is a carer for her daughter, told money-saving community LatestDeals.co.uk, that their DIY summerhouse cost a fraction of the price they would’ve paid for a brand new one.

She said: ‘About two years ago my husband wanted to create a bigger summerhouse for our daughter Lois, 13.

‘She has a rare chromosome syndrome and was regularly sitting outside in her little playhouse.

‘He looked at the options of a wooden cabin and a full metal frame build but prices were in excess of £16,000 to £25,000, not including delivery, and most of them are miles away.

‘While looking, he came across container conversions which are getting quite common in other countries as lower-priced living accommodation. 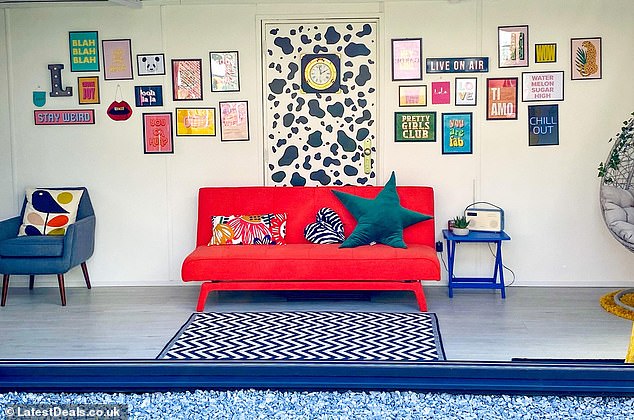 Dawn said Darren looked at the idea of purchasing a wooden cabin and spent months trying to convince her they should go ahead. Pictured: Inside the renovated summerhouse 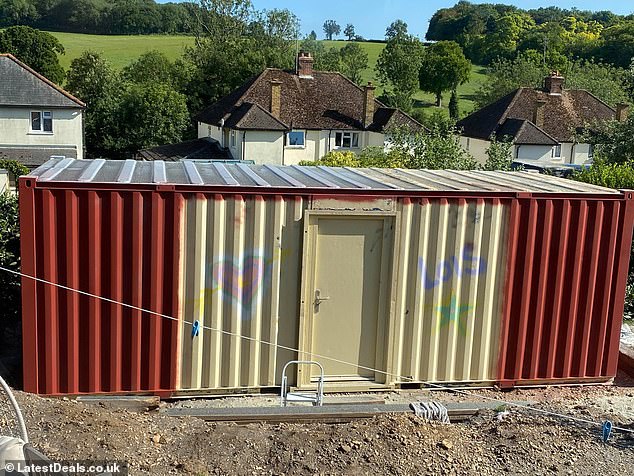 Dawn said they chose to purchase an ex-site cabin because it was cheaper and comes with insulation, ceiling, lighting and electrics already installed. Pictured: The summerhouse in the process of being renovated 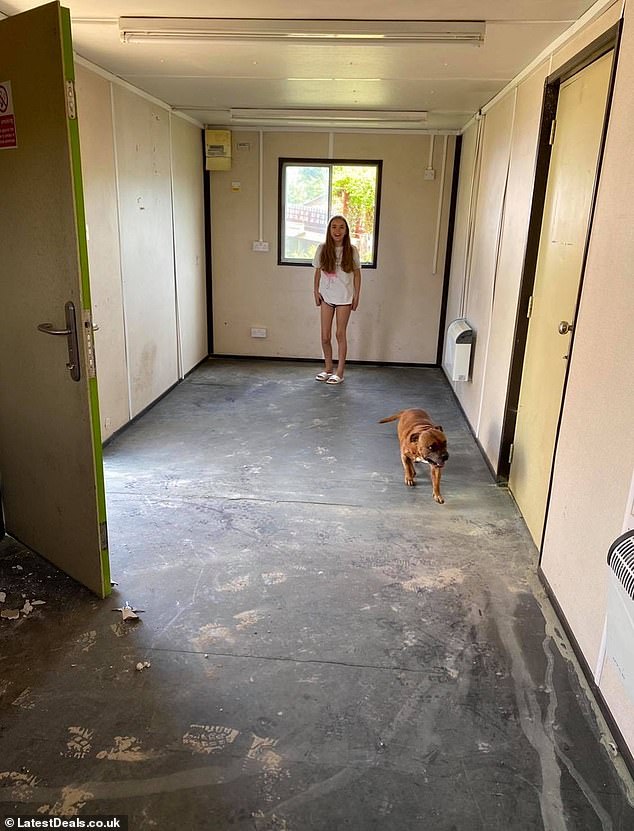 Dawn said their ex-site cabin from a company that trades in used machinery was delivered using a crane. Pictured: Lois in the summerhouse, before renovations

‘Once he was hooked on the idea, he spent months talking me around because frankly, they are ugly! I couldn’t imagine that a big metal thing could look nice in our garden.

‘After lots of research, we decided that instead of using a shipping container, it might be cheaper to use an ex-site cabin.

‘They come with insulation, ceiling, lighting and electrics already installed.

‘This would be costly and time-consuming to install so would save us a lot of labour.

‘We then hunted for a used site cabin hoping for one with as little already inside as many come with sinks and partitions.

‘It was purchased from a company that trades in used building site machinery found on ebay and Facebook Marketplace. We have rear road access so it was delivered with a crane over the back. 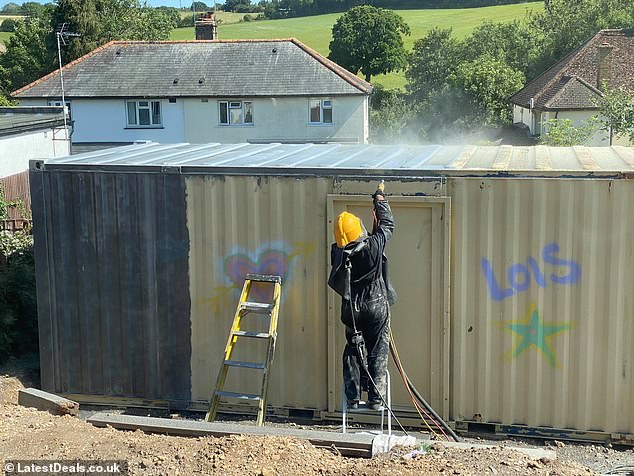 Dawn revealed a friend who does metal works helped to prepare the cabin for doors to be installed. Pictured: The summerhouse, before renovations

‘Once it arrived, we got to work with cleaning and preparing to have a hole made for the bifold doors.

‘We have a friend who does metalworks. They cut a hole into the front and built a steel frame ready for the doors to be installed. These were then fitted by a local window company.

‘We stripped all the unwanted trims and had the electrics rewired as we decided we didn’t need the heaters as they cost a lot to run or so many plug sockets.

‘We filled and tidied all the wall panels ready to be painted. The floor needed a lot of work as it was quite uneven from water leaks.

‘Once levelled, we used vinyl plank flooring. The outside was sandblasted by someone we found on Facebook Marketplace.

‘We couldn’t afford the roof to be done with our budget so my husband used a hand grinder to do the roof himself, then together we painted the whole of the outside. 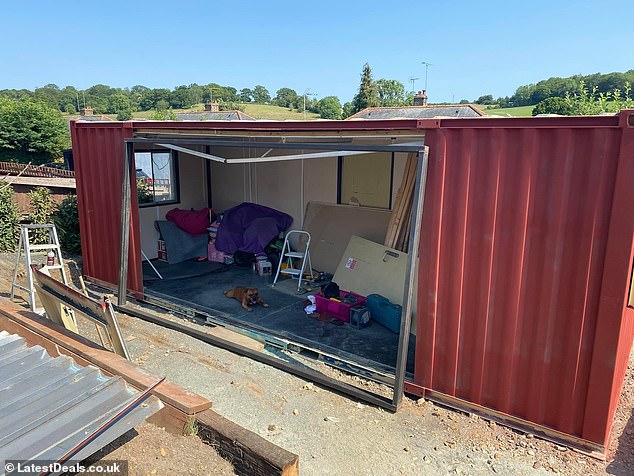 Dawn said the doors for the summerhouse were cheap because the window fitter had a surplus. Pictured: The cabin during renovations

‘We wanted to swap the windows but we realised this would be an absolute job to do so I bought some cheap window film and painted over all the brown plastic frames.

‘The outcome looked so nice and modern that I was happy to settle with them being left!

‘Our friends cut the hole and made the frame as a donation to our daughter.

‘The doors were also drastically cheaper due to a fortunate situation where the window fitter had surplus. We didn’t have a hole cut so we could have any size doors. 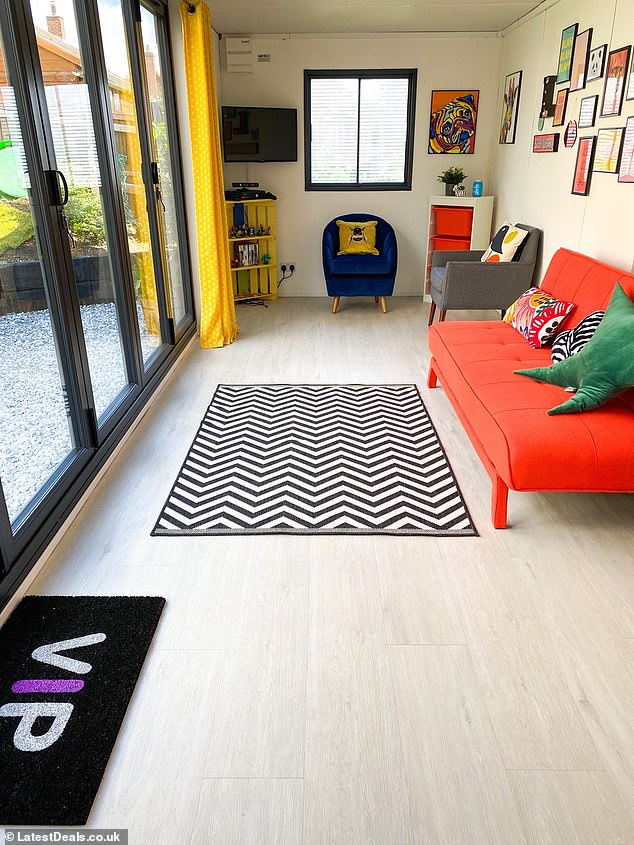 Dawn said they spent around £5,700 including the cost of doors, sandblasting, paint and furniture. Pictured: Inside the renovated cabin 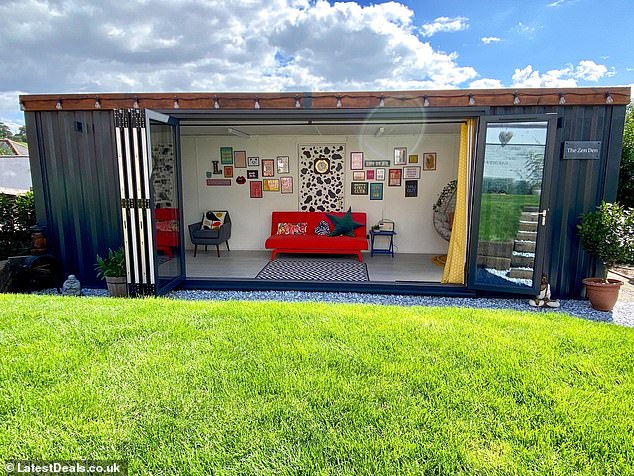 Dawn said Lois, who has disabilities, will be able to use the space as a quiet area outside of her ‘tiny’ bedroom. Pictured: The renovated cabin

‘It will be used all year – our daughter has disabilities and it gives her another quiet space to take time out as her bedroom is tiny.

‘There’s a TV and games in there – it’s an extra room really. It’s great as we made use of a sloped part of the garden which was wasted space.

‘Although we removed the old large heaters we have a small one so it’s cosy. It’s also perfect for family get-togethers and summer BBQs when the evenings turn cold.

‘Because it’s insulated properly it’s not too hot in the summer, and with the doors open it’s a nice shaded area.’

The family who are all over the moon with the finished look of the project, say it kept their hands full during the lockdown.

‘This project kept us busy over lockdown,’ Dawn said.

‘We had a lot of work but equally a lot more time to pull together to create a space our daughter loves. I loved planning the decoration. I worked on keeping it with a Scandinavian feel.

She added: ‘I ordered wall art from Etsy, the rug and armchairs from Wayfair, the sofa from Made.com, the egg chair from B&M, the storage from IKEA, the flooring from ebay, the cushions from Etsy, IKEA and Home Bargains, the throw, ivy and indoor lights from Amazon, the outdoor lights from Festive Lights, the round rug from Benuta and the curtains from La Redoute.

‘I ordered chairs and sofas so that it would be a lovely place for Lois to hang out with her friends – she has named it ‘The Zen Den’! 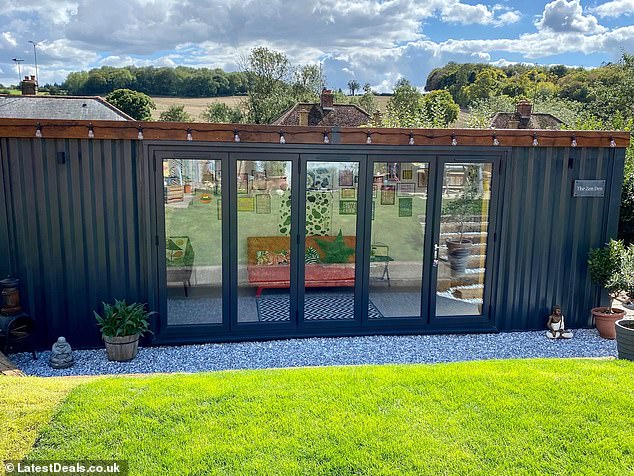 Dawn said she ordered budget furnishings including storage from IKEA, flooring from eBay and cushions from Etsy. Pictured: The summerhouse after renovations

‘We are really proud of ourselves. At first, I was totally against such an ugly thing being delivered, and I couldn’t see how it would ever look like those we found online! ‘I agreed because paying for a new one was never an option, only a dream, as it was outside of our financial reach.

‘The great thing is if we ever get bored or want to move it the whole thing picks up on a crane!’

Tom Church who is the co-founder of LatestDeals.co.uk, added: ‘With many families working and studying from home in the lockdown, the need for new living, playing and work areas has only increased.

‘However, as Dawn points out, ready-made garden cabins can cost an absolute fortune!

‘Sourcing an ex-site cabin and revamping it is a fabulous and money-savvy idea – and it looks absolutely brilliant.

‘Lois’s summerhouse looks incredible – I’d love one just like that for the ideal space to work from home!’