This show should have it all. A grand romance is torn apart in World War 2 by mean Germans. Even better, post-Durrells, it is set against that British fantasy sun-drenched backdrop of charming, quirky Greek islanders. The book sold millions, the movie with Penelope Cruz and Nicolas Cage misfired and this witty, inventive stage production somehow also fails to ignite. It has its moments, but, for a story so rooted in a sense of almost mythical place, it failed to sweep me to Cephalonia or make me truly care.

The simple stage is defined by a huge beaten copper sheet suspended overhead. Projections ripple across it, from a map of the island to wartime bullets shattering lives.

Two physical performers play the goat and pine marten. This kind of thing can irritate, but it is done with real charm here.

The human protagonists were rather more of a mixed bag.

Alex Mugnaini was soulful and sweet as the titular soldier who years to be a musician. Unfortunately, it is a slightly spineless role with a final act fail which removes much of the audience’s sympathy. He also only appears properly in the second half. Rather ill-judged for a play based on a love story, although the book and film managed it no better. 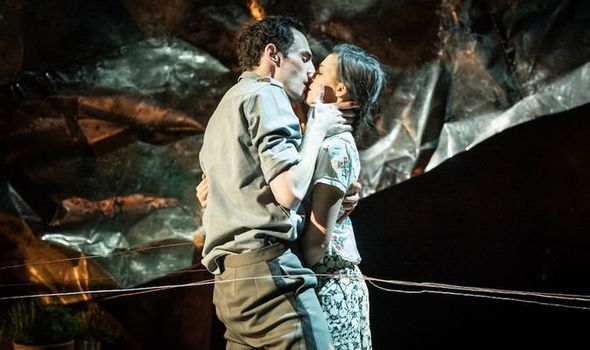 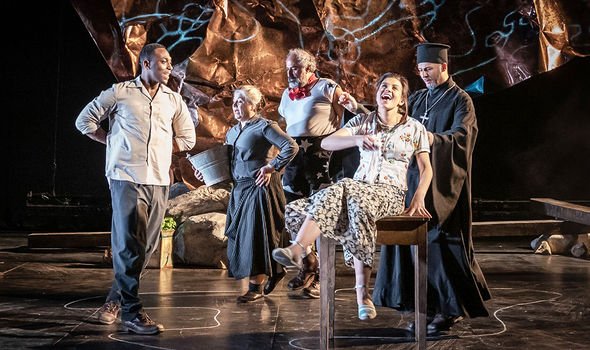 Madison Clare carries the show as the feisty and resolutely independent Pelagia. It’s a strong performance. She delivers her lines with little care for the feelings of others which, although admirably done, again makes it a little hard to ever totally engage with her.

The first act gay affair between Italian soldiers Carlo and Francesco is rather earnest and, for me, hindered by the inability to really take very much from Ryan Donaldson’s emotionally flat Carlo.

Also, just as a sideswipe, colour-blind casting is most welcome and enrichens the theatre but I struggle endlessly with accent-blindness. How is Carlo broadly Geordie? Does this signify his Italian working-class roots? The cast confusingly switches into poorly accented Italian, Greek and German when they first encounter each other, then back to variously accented English once they find a “common language.”

It just didn’t work for me.

Eve Polycarpou has some powerful moments as Drosoula, especially when singing, and Ashley Gayle is intense and convincing as her son Mandras, too illiterate to ever win Pelagia’s heart.

Scenes of battle are evoked with innovation and some real punch and ultimately made more emotional impact than the interior lives of the main characters.

The sparse staging, though inventive requires a huge suspension of disbelief, but I was never quite able to believe and feel (or care) that I was sharing a desperately sad and at times horrific moment in our communal history.

This is a touring production, so enormous sets, even if desirable, are not possible. However, having seen how the Amelie touring adaptation magically evoked time and place, I was left a little underwhelmed here.