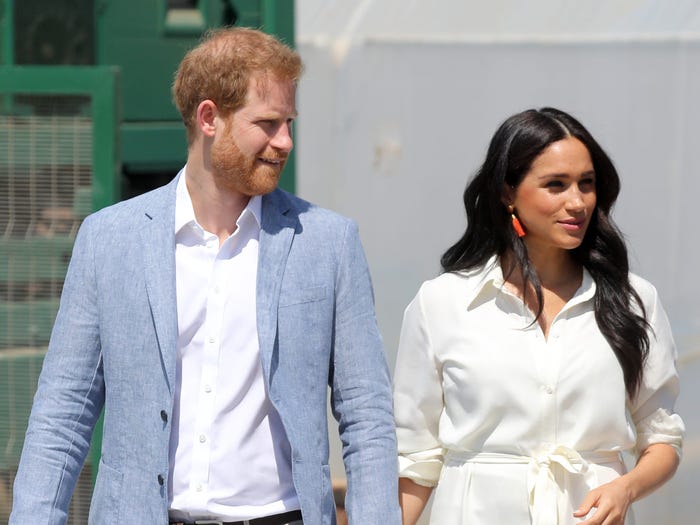 Buckingham Palace has been criticized for its response to Meghan Markle's op-ed in the New York Times, where she spoke about her experience having a miscarriage earlier this year.

The Duchess of Sussex said she realized she was having a miscarriage after feeling a "sharp cramp" when holding her first son, Archie Harrison, one morning in July. She described the experience as an "almost unbearable grief" in the op-ed, titled "The Losses We Share."

Russell Myers, royal editor at the Daily Mirror, said Buckingham Palace declined to comment when he contacted them about the duchess' op-ed.

"I think this is a huge, huge missed opportunity for the royal family … they should have made a public statement to say, this is a really brave and honest thing to do, because just on the very basis that it would have mended some of the cracks in the relationship that we've been talking about for months and months," Myers said during a recent appearance on talkRadio.

He added: "The palace just said to us, 'This is a deeply personal matter for the couple.'"

Buckingham Palace did not comment on the Daily Mirror's report about Markle's op-ed, however an anonymous source credited as a "palace insider" told the publication: "There is, of course, much understandable sadness in the family."

Myers also said that if the palace had opted to comment, it would have provided a bigger conversation about the topic, rather than "just be Meghan out on her own."

The Duke and Duchess of Sussex have appeared to have a strained relationship with Buckingham Palace since they resigned from royal duties earlier this year. There was confusion surrounding the couple's "step back" announcement, which was published on Instagram instead of via a palace press release.

There were reports that the couple did not inform the palace that they were planning to make the announcement, although Markle later disputed this claim and said they had informed the Queen and Prince Charles.

Earlier in November, it was reported that palace officials refused Prince Harry's request to be represented at the family's official Remembrance Service with a wreath laid on his behalf.

According to The Daily Beast, the press offices for Queen Elizabeth II, Prince Charles, and Prince William all declined to comment on the op-ed. However, a source told the publication that Harry and Markle informed the family about the op-ed before its publication.

The palace's "no comment" policy is not unusual. The royal press offices rarely provide on the record statements in response to reports about the family in the media. It's a tradition that dates back to the "never complain, never explain" mantra that was first used by the Queen Mother in 1936.

Richard Fitzwilliams, a royal commentator and former editor of "The International Who's Who" told Insider that the criticism of the palace's response shouldn't be justified.

Fitzwilliams said that while "it is has undoubtedly been a difficult year for the royal family and their relationship with the  Sussexes," it is "totally incorrect" to label the palace's response to Markle's op-ed as uncaring.

"The statement, that it was a deeply personal matter which the Palace would not comment on, was accompanied by comment from a source which said there was obviously understandable sadness in the family," Fitzwilliams told Insider.

"It has also been reported that Harry's brother William and his father Prince Charles had been extremely supportive and that the royal family has been kept informed and been greatly saddened by the news. It is deplorable that anyone could have suggested otherwise," he said.

Buckingham Palace did not immediately respond when contacted by Insider.

Lady Gaga Performs the National Anthem at Presidential Inauguration Ceremony 2021
We and our partners use cookies on this site to improve our service, perform analytics, personalize advertising, measure advertising performance, and remember website preferences.Ok