Bring your partner, bring your friends, bring your teenagers. Bring it On: The Musical, a Broadway hit that just packed houses in Melbourne,  has arrived in Perth and it’s a super fun spectacle with two amazing leading ladies at the helm.

Loosely based on the memorable teen cheerleading movie of the same name starring Kirsten Dunst, the musical now on at His Majesty’s Theatre is a super fun mix of dance, teen drama, quality performances, comedic moments and girls being thrown high in the air with the greatest of speedy skill.

It features cheerleading, and lots of it. How on earth they found a cast with the voices, acting ability and capacity to cheer-dance at warp speed all at the same time remains a mystery. The press release describes them as "multi-threats", which seems accurate.

Just watching some of the choreography exhausted me. 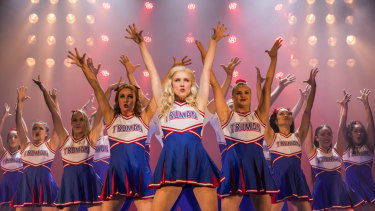 When it comes to physically demanding performances, those of these leading ladies might just take the cake.

Cheerleading star from the rich side of the tracks, Campbell, is played by Kirby Burgess who turns in a vocal that moves from preppy poppy to emotive and soaring. She barely leaves the stage during the two hour show, a stage she commands impeccably throughout.

The story begins with Campbell leading her cheerleading squad at their privileged school full of privileged teens. Mostly gorgeous and blonde.

With themes of friendship and acceptance, the show offers plenty of comedic moments, many brought to life by the hilarious stand-out performance of Baylie Carson who plays a girl who desperately wants to fit in. But while the girls bop around in tiny cheerleading skirts, she’s relegated to the mascot suit. 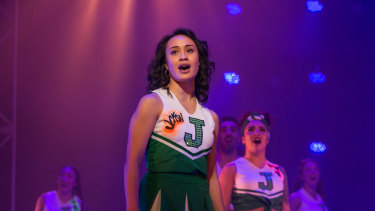 Jasmine Smith turns in a star performance. Credit:Bring It On

The show really takes off though when Campbell finds herself attending what she assumes is a wrong-side-of-the-tracks school and tries to make friends with a group of girls who are a joy to watch. They demonstrate fearless friendship, a whole lot of attitude and pride in their sassy and strong characters, which is much more interesting to watch than the bitchy blondes back at the other school.

But it’s when these ladies dance and leader of the pack Danielle, played by Jasmine Smith, sings that this musical really hits its stride. Smith is superb. Danielle is Jasmine’s first starring role, the performer currently finishing her final year of musical theatre at the Victorian College of the Arts.

The show enthrals throughout the second act. There is so much cheerleading action, combined with breakdancing and a few tender moments that the second half flies by. 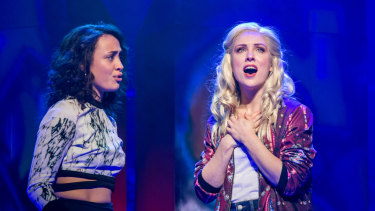 The leading ladies. Credit:Bring It On

Some young ladies, maybe 11 years old, told me the show was too loud! It’s loud, proud and fun throughout.