A bride-to-be was slammed online after revealing she is considering uninviting her sister from her wedding because she cannot afford an expensive wedding gift.

The woman, believed to be from the US, explained her sister had called her in tears because she doesn’t have enough money to buy any of the expensive presents listed on the registry.

The bride-to-be then asked whether she should add more affordable gifts to her list, accept cash gifts, or simply ‘dis-invite’ her sister.

She shared her conundrum to the That’s It, I’m Wedding Shaming Facebook group, where people were quick to mock her and branded her materialistic. 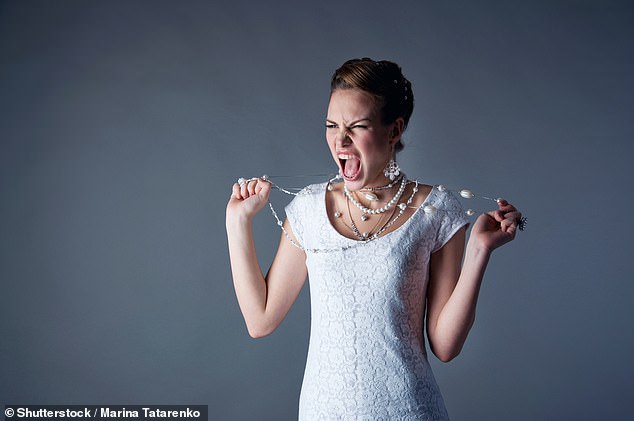 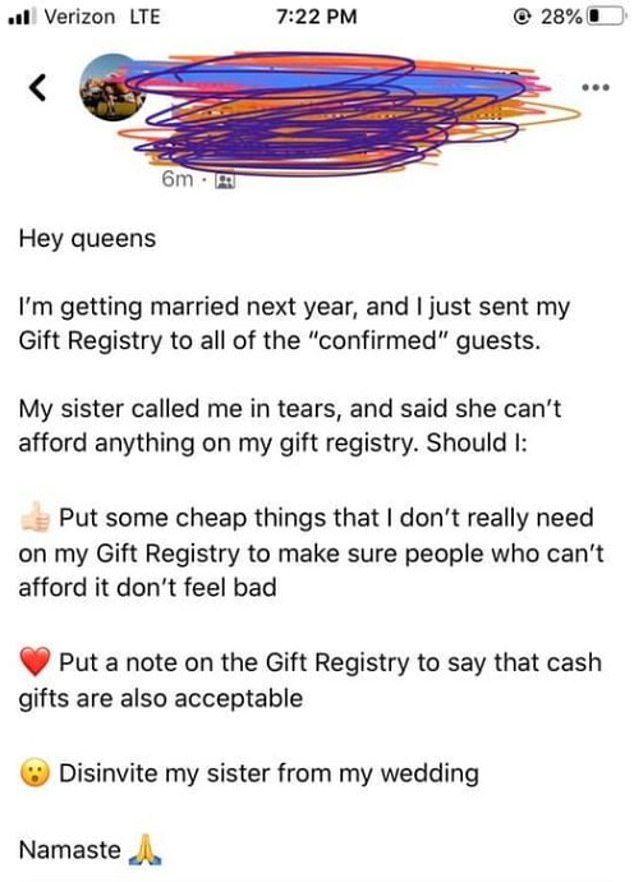 The bride asked for advice on whether she should request cheaper gifts, accept cash or uninvite her sibling – but people slammed her for even considering the latter

In the Facebook post, initially shared on an alternative group, she wrote: ‘Hey queens, I’m getting married next year, and I just sent my gift registry to all of the “confirmed” guests.

‘My sister called in tears, and said she can’t afford anything on my gift registry.’

She then put forward three potential solutions to her conundrum, writing: ‘Should I: Put some cheap things that I don’t really need on my gift registry to make sure people who can’t afford it don’t feel bad; put a note on the gift registry to say that cash gifts are also acceptable; disinvite my sister from my wedding.’

The bride-to-be signed off the post with ‘Namaste’, followed by a prayer emoji.

While she didn’t specify whether she was joking or not, people certainly didn’t find her post funny.

Many claimed they were shocked that she wanted gifts so badly that forgoing wedding presents was not even an option.

‘A wedding isn’t about gifts. I hate people like this,’ one commented.

Another mocked the bride by writing: ‘Sorry ur poor? disinvited [sic].’

And one suggested: ‘If you’re that greedy over gifts, maybe tell people before you invite them so they don’t feel bad about ditching your wedding.’

Others made fun of the bride for using the Hindu greeting ‘namaste’, with one commenting: ‘Na ma steeeee away from your wedding.’

‘You can namaste the hell away from me with that ridiculously expensive gift registry,’ another said.

‘Of course someone who would consider disinviting her own sister from her wedding for this reason would sign off a post about that concept with “namaste”,’ another quipped.