Brendan Murphy, who became the public face of Australia's fight against the coronavirus in March, will be among the eight nominees for Australian of the Year next January.

Professor Murphy, who recently left his role as the federal government's chief medical officer after almost four years, was on Monday night named as the Australian Capital Territory's Australian of the Year. 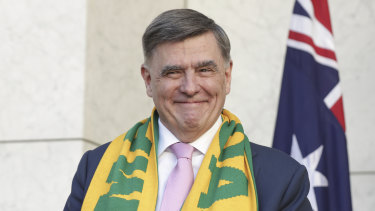 Professor Brendan Murphy, who was the chief medical officer during the peak of the coronavirus pandemic, will be up for Australian of the Year.Credit:Alex Ellinghausen

The 65-year-old, a kidney specialist, was chair of the Australian Health Principal Protection Committee, which provided guidance to national cabinet about shutting down Australian business and community activities and implementing physical distancing measures.

This time last year, Professor Murphy was a relatively unknown figure. But as chief health officer, he quickly became the public face of the Australian response to the coronavirus outbreak, giving daily televised press briefings to update the public on the global spread.

As chair of the Australian Health Protection Principal Committee, made up of state and federal chief medical officers, Murphy was responsible for coordinating advice to health ministers about how to respond to the outbreak, from diagnostic testing to isolating suspected cases.

Behind the scenes, he also modelled a range of scenarios, depending on then unknown factors, such as the coronavirus death rate and how widely it would spread.

He was due to take on a new role as federal health department secretary in February, but he stayed on until June to help with the first months of the pandemic response. He also represents Australia at the World Health Assembly.

The former head of Austin Health in Melbourne has spent 40 years working as a doctor, medical researcher and senior executive.

The most important news, analysis and insights delivered to your inbox at the start and end of each day. Sign up to The Sydney Morning Herald’s newsletter here, to The Age’s newsletter here and Brisbane Times‘ here.