Romance in the park! Bradley Cooper was spotted locking lips with Matt Bomer on the streets of New York City — for their upcoming movie.

The 47-year-old Silver Linings Playbook star and the 44-year-old White Collar alum were seen sharing a tender kiss as they filmed Cooper’s newest directorial project Maestro — a biopic on the life of musician Leonard Bernstein.

The American Hustle star, who is also playing the lead role of Bernstein, donned a beige trench coat over a white dress shirt and black trousers with a green polka dot bowtie. The Magic Mike actor, for his part, sported a dark red and blue tie and black slacks under a grey wool jacket.

Bradley Cooper Through the Years: From Guest Star to Leading Man

The American Horror Story alum will be playing a clarinet player with whom Bernstein had a brief romance. Both men had their hair slicked back with gel to match the 1950s style and could be seen wearing gold wedding bands, with Cooper sporting carefully placed prosthetics to help him better emulate the physical features of the iconic Broadway artist. 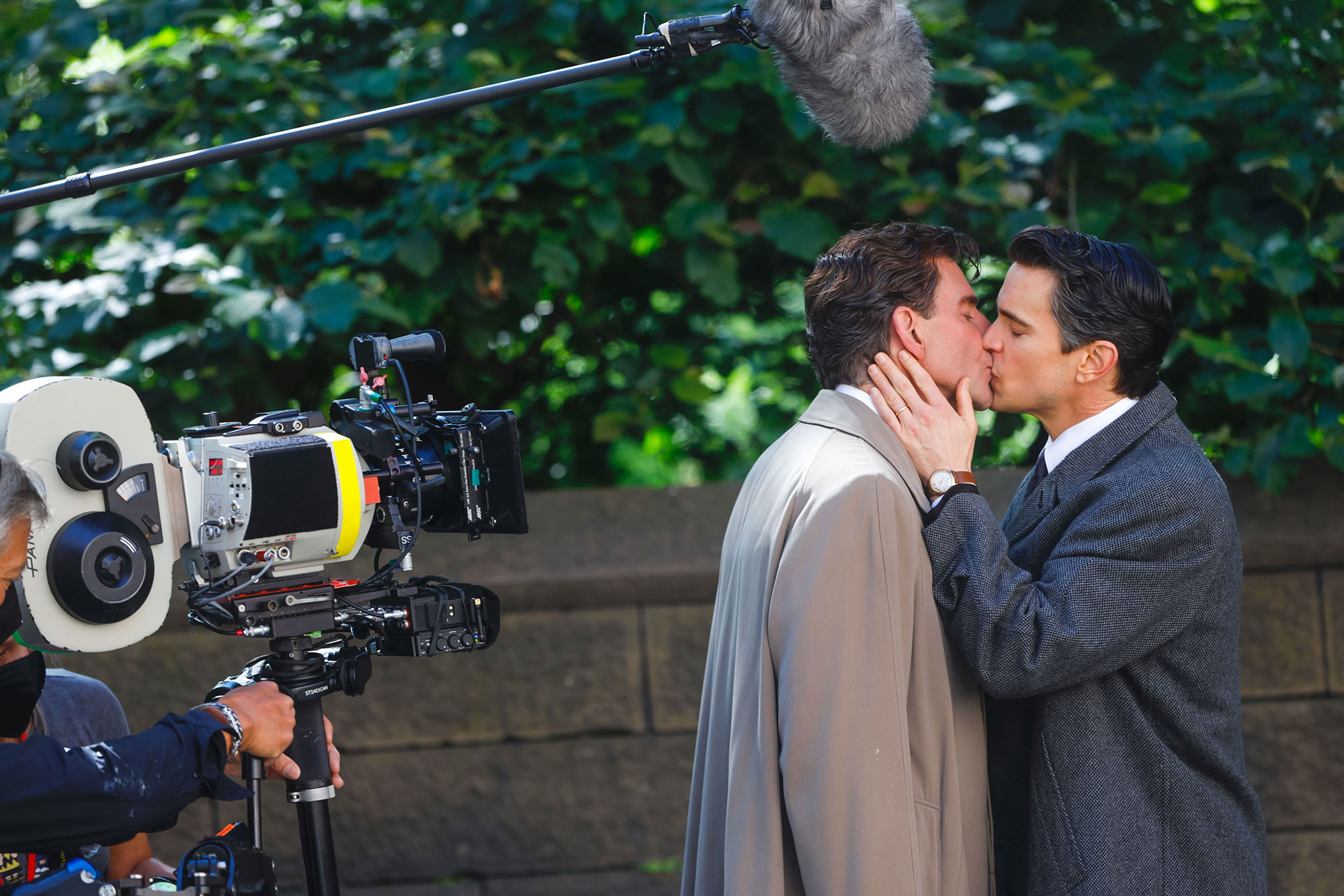 The biographical drama, which will start streaming on Netflix in 2023, also stars Carey Mulligan as Felicia Montealegre, the Tony-award winner’s wife and Maya Hawke as Jamie Bernstein, the couple’s eldest daughter. Succession star Jeremy Strong will portray John Gruen, the author who penned the legendary conductor’s biography, The Private World of Leonard Bernstein.

The film, which is also co-written by Cooper, will follow the 30-year romance between Bernstein and his wife that continued through two engagements and three children despite the pianist being openly gay.

While Spielberg was originally set to direct, the American Sniper actor eventually asked if he could take the reigns himself.

“I [told Spielberg], ‘I always felt like I could play a conductor, but may I research the material and see if I can write it and direct it? Would you let me do that?’” Cooper told Variety in May.

“Steven has a lot of interests — he’ll just choose one thing and all of the other things will be on hold,” he continued. “I think he knew he wasn’t going to make that movie for a while. He was kind enough to hand it off to me, and that’s what I’ve been doing for the last four and a half years.”

This will mark Cooper’s second directorial achievement. His debut, 2018’s A Star is Born, grossed over $436 million worldwide and scored eight Oscar nominations, including Best Picture. The actor, however, revealed in January it has been his longtime dream to step into the West Side Story composer’s shoes.

Bradley Cooper and Irina Shayk: The Way They Were

“I wanted to be a conductor since I was a kid. I was obsessed with it, asked Santa Claus for a baton when I was 8,” Cooper told Mahershala Ali in January during Variety’s Actors on Actors series. “Listening to music, falling in love with it and being able to really know every single moment of a piece … I could do it as if I know everything about it without really being able to speak the language, obviously.”