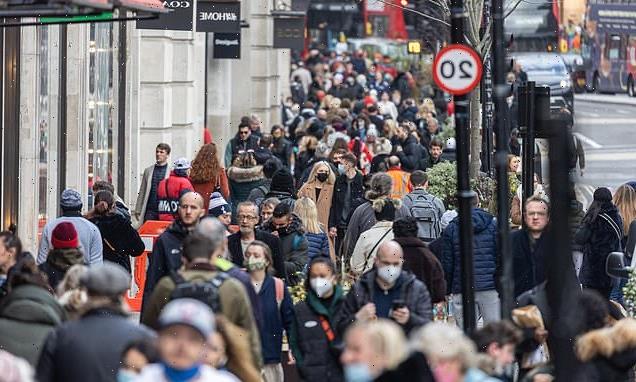 Banking on jabs so we can see in the New Year: ELEANOR HAYWARD analyses the three key Covid issues as Government waits for more evidence by deciding on next move

Resisting pressure for another round of draconian restrictions, Boris Johnson last night insisted he was monitoring data on Omicron ‘hour by hour’.

Officials in Downing Street will spend the four remaining days until Christmas poring over hospital admission figures, along with studies from around the world.

This data will determine if we will be allowed to celebrate New Year’s Eve with friends and family. 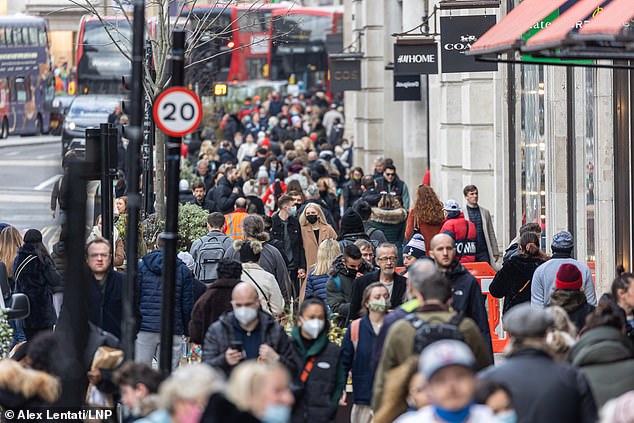 Shoppers, some wearing masks, out London this afternoon as the country gears up for Christmas. Ministers remain hopeful Omicron may be less severe than previous variants

While Government scientists have argued for further curbs to prevent the NHS toppling under a wave of Omicron patients, the Prime Minister and his team remain unconvinced.

They insist there is not sufficient evidence to justify plunging Britain into a fourth lockdown, with all the catastrophic economic and social damage this would entail.

With the situation ‘very, very finely balanced’, the Government is waiting for more evidence on three key issues.

There is no doubt Omicron is more infectious. The mutant strain arrived in Britain less than a month ago, but has already outcompeted Delta to become dominant.

Infections are higher than ever, with 102,297 positive tests recorded last Wednesday, the first time daily cases have topped 100,000.

At any other point in the pandemic, this ferocious growth would almost certainly have been followed by new restrictions.

But ministers remain hopeful Omicron may be less severe than previous variants – and there is some evidence that this will prove to be the case.

Scientists in South Africa say Omicron patients are 29 per cent less likely to need hospital treatment than with previous variants. 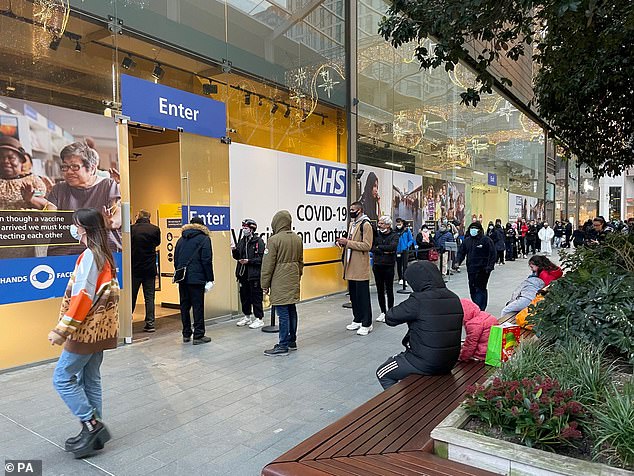 People queue at a Cvoid vaccination centre in London. Data from the UK Health Security Agency shows two doses are not enough to prevent infection by Omicron

A study of 211,000 Covid patients also found the proportion requiring intensive care was half that of previous waves, and most recover at home within three days.

Meanwhile, two studies have provided plausible biological reasons for why Omicron is less likely to cause severe disease and lung damage.

A team of Cambridge University researchers, led by Professor Ravi Gupta, found signs Omicron is less effective than other variants at infecting cells in the deep part of the lung.

This tallies with findings from the University of Hong Kong which suggested the variant replicates at a tenth of Delta’s speed in the lungs, reducing the severity of illness.

Ministers have stressed they will only consider another lockdown if the NHS faces a wave of Covid hospitalisations that would cause other care to collapse.

But the Prime Minister yesterday said there is considerable ‘uncertainty’ over the key question of ‘how many people does Omicron put into hospital’.

But their modelling assumes Omicron is no less severe than previous variants.

If – as hoped – vaccines provide a good level of protection, a lockdown may prove unnecessary. In South Africa admissions are at just 57 per cent of the previous peak despite the number of cases being similar.

And latest NHS data shows hospitalisations remain stable. While weekly cases have surged 61 per cent, admissions are up just six per cent.

Currently an average of 864 Covid patients are being admitted a day, down from 4,200 at the January peak, and more than 2,000 this time last year.

Government scientists and politicians can agree on one thing: Without vaccines the UK would be in a ‘massive, massive mess’.

It is clear existing vaccines, in particular boosters, protect against Omicron. But there is enormous uncertainty about whether the ramped-up vaccine rollout will be sufficient to fight off the variant.

Data from the UK Health Security Agency shows two doses are not enough to prevent infection by Omicron.

But a booster of Pfizer or Moderna tops up protection to around 75 per cent compared with the unvaccinated.

With 50 per cent of Britain’s over-12s now boosted, and nearly one million jabs being delivered each day, vaccines provide the strongest argument against new restrictions.

Eight in ten UK adults have now been double-jabbed. Although this may no longer be enough to prevent infection, it is still likely to offer some protection against severe disease.