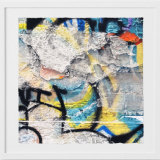 Amber-rose Hulme is a young artist whose rapidly growing popularity shows that realism – or realism-with-a-twist – never goes out of fashion. Hulme has a degree in genetic science but since graduating, has devoted herself to art. In her show, Context, at the Flinders Lane Gallery, one can see that Hulme's style retains a good deal of scientific exactitude. She works patiently in the difficult medium of pastel to capture the textures of spray paint, bricks and peeling paper in a series of pictures based on the graffiti in Melbourne's laneways.

Drawing with pastels is a slow and painstaking process: the very antithesis of graffiti art, which is known for its quickness and spontaneity. The precise realism of Hulme's work is also at odds with the abstracted nature of the images she is capturing. Graffiti is largely an ephemeral artform in which one artist writes over the work of another until a wall becomes covered with many layers of inscriptions, a cacophony of different voices. Hulme's pictures freeze the moment, immortalising the images as fine art. In pictures such as Surround and Backdrop, which show the laneways in deep perspective, she drains the colour from the edges of each scene, making the central areas stand out with an exaggerated vividness.

Can I afford it?

As an emerging artist, Hulme's prices are very accessible. Of the 10 pastels on paper in this show, the most expensive is Out of Context (152cm x 102cm) at $7000. Four pieces – Facet (pictured above), Fraction, Fragment and Scrap (each 57cm x 57cm) are a mere $1800. If one only considers the time expended on each work, these are very modest sums.

Where can I have a squiz?

To read more from Good Weekend magazine, visit our page at The Sydney Morning Herald, The Age and Brisbane Times.