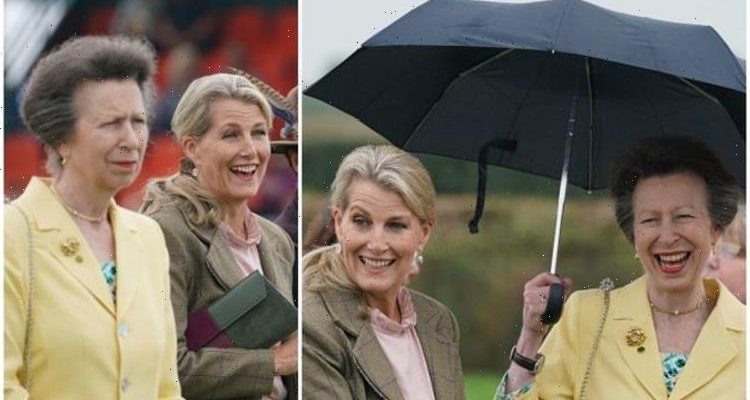 Princess Anne was ‘ungracious’ in first US trip says Junor

Their relationship has often been analysed throughout the years as very cordial, as there have been no major disagreements between the pair nor any royal scandals or drama between the two royal ladies.

Rumours swirled during the 1980s and 1990s that Princess Anne often disapproved of Princess Diana and Sarah Ferguson’s actions, the wives of Anne’s other two brothers, but those same rumours never applied to the Countess of Wessex.

A body language expert, Judi James, spoke to Express.co.uk about the relationship between Princess Anne and Sophie and analysed their appearances today at the Westmorland County Show.

Judi said: “It’s always a pleasure to spot happy relationships in the royal Firm and this one, between Princess Anne and her sister-in-law Sophie, is a bit of unexpected joy.

“The two women are rarely spotted together in public, least of all on royal visits.

“This is probably because their workload and their almost identical profiles as drama-free and loyal professionals makes a double act between them unnecessary and a bit of a waste of good talent.

“It’s pretty clear from their body language in these poses though that they delight in each other’s company and have a capacity for shared humour and fun.

“Anne, in particular, seems to have dropped her guard here and to be fully immersed in the kind of relaxed body language and authentic laughter we only normally see from her when she is with her daughter Zara and her children.

“Even when they are standing back-to-back their body language is pretty similar and this mirroring suggests strong bonds of empathy and like-minded thinking.

“Not only is Anne happy to hold her own umbrella here, but she also looks completely comfortable holding it over Sophie’s head, too.

“Her fun rituals involve the kind of backwards-lean that suggests side-splitting smiles.

“Sophie’s one raised brow gesture is a signal that she might be the one causing Anne to roar with laughter here.

“Early photos of Anne always suggest she doted on her youngest brother who was a small baby when she was a teen.

“That affection appears to have been life-long and extended to Edward’s wife Sophie.

“Sophie was also very close to her father-in-law Philip and with Anne always being the ‘chip off the old block’ in terms of her late father, that mutual love for the Duke might also have brought both women even closer together recently.”

The Countess of Wessex and her husband Prince Edward also attended a royal event on Wednesday, when they paid a low-key visit to a Northamptonshire charity, Home-Start Corby.

They paid tribute to the staff there for their work supporting the local community.

Also, on Tuesday Sophie attended the RAF Wittering base to watch regiments compete in the Wessex Cup.

The 56-year-old was in high spirits as she watched the games taking place, and she even showed off some of her skills as she played the rallying game Dirt Rally 2.

The Countess has a close link with the base, as she holds the honorary title of Air Commodore, Royal Air Force, Wittering.