Perhaps you're still reeling from Miley Cyrus and Liam Hemsworth’s split after ten years together,  or maybe you never really got over Jon Hamm and Jennifer Westfeldt calling it quits after 18 years. It might be embarrassing to admit but the demise of celebrity relationships, especially long-term ones, can make you sad. Or more pertinently, can be a reminder that everlasting love is never guaranteed and that break-ups are truly the worst. For everybody. Even for the very rich, very famous and very beautiful. 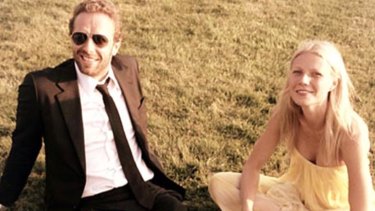 Many people were shocked when Chris Martin and Gwyneth Paltrow consciously uncoupled.

As New York based therapist Katherine Schafler told US Instyle magazine, celebrity relationships (and their demise) can be symbolic for the hopes, fears and desires we pin on our own real-world ones.

“We attach ourselves to famous people because they symbolise our deepest desires for power, attention, access to resources, and the social success of being liked,” she says. “We need to see how awesome their homes are, we like hearing how much money they make, and we definitely want to see how amazing their relationships are.”

Their break-ups, then, throw us off entirely.

The common legalese thrown around in celebrity break-ups is "irreconcilable differences." And anybody who has been in a long-term relationship could attest that these differences can mushroom up in worn-in relationships in the form of mismatched sexual libidos,

different attitudes toward parenting, career ambitions and thwarted plans, the taking up of an irritating new hobby or religious fervour or slowly becoming more conservative.

Generally the kinds of things you might not think to ponder when in the hot flush of love in its early days.

According to the Australian Bureau of Statistics the number of divorces granted increased by 5.2 per cent in 2017. The number of marriages also decreased in 2017 by 4.6 per cent. The median duration of the marriage remained stable at 12 years. Which is a solid innings, yes, but nothing close to "forever."

Alexandra Barbas, senior clinician with Relationships Australia says that all long-term relationships go through similar changes. There are the exhilarating highs of new love. There is the settling into a mature kind of love where you accept the person for who they are. The trickiest phase might well be the one in the middle.

"This is a time when the couple tries to change their partner back into the person they thought or hoped they were. A typical relationship pattern that emerges at this time is the pursuer-withdrawer dynamic," says Barbas.

Barbas says some couples can flat-line in this phase. Getting through it is about learning to accept and appreciate each other's differences and finding new shared experiences.

Barbas is also a fan of the seven principles of couples from American psychological researcher John Gottman, which include turning toward your partner when they bid for affection and sharing decision making. She also believes couples therapy, even when you're happy, can be a beneficial practice.

"Couples therapy is not just about going when everything has gone awry in a relationship. It is one of the ways that couples demonstrate how they value their connection and love.

It can help couples that are about to go through significant life transitions, such as getting

married or having their first baby, talk about their fears, dreams and expectations for their future.

Another reason why happy couples come to counselling is to 'tune-up' their relationship which may involve reviewing any goals or decisions made to ensure that they are still on the same page," she says.

But can you predict how life might seep into your relationship, and steer it off course? How it might set you and partner adrift from each other, perhaps even from who you once were and who you expected to be? Perhaps not. But you can prepare your relationship by working, consistently and with shared focus, on its foundations.

"Deposits include talking about issues as they arise, sharing your goals and your dreams, working as a team, being adaptable, embracing changes, fighting fair, repairing hurts, sharing decision-making, having fun and laughing together, investing in yourself so that you bring the best of yourself to the
relationship and getting help and support to address challenges."

"All relationships change over time and couples need to change and grow with them. Embracing the challenges and phases that life presents with their partner ultimately brings the couple closer together," she says.