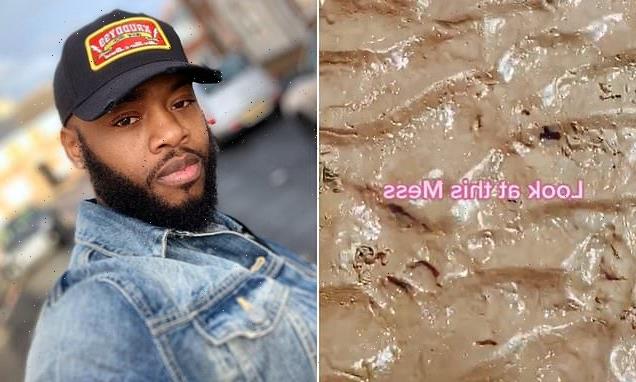 Welcome to the great British seaside! American man goes viral with his VERY scathing review of ‘horrible’ Weston-super-Mare beach as he finds himself ‘stuck in the mud’ and unable to swim

An American influencer went viral after he visited the British seaside for the first time – and was less than impressed by the low tide and muddy beach.

Nick Alexander, who is known online as ‘Mr Miami UK’ and lives in Wolverhampton, visited Weston-super-Mare and was disappointed to find a long shoreline covered in thick mud.

Nick, who expected the white sands of Miami, where he’s from, documented his unhappy experience on video sharing app TikTok where it quickly went viral. 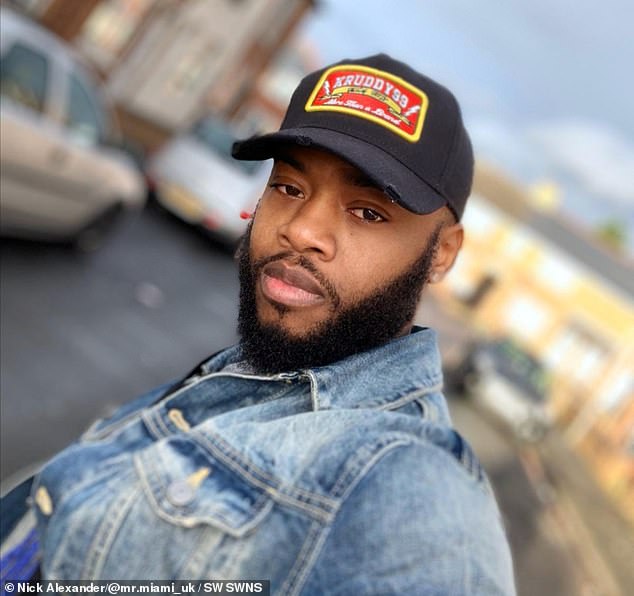 Nick Alexander, pictured, a TikTok personality who is originally from Miami but moved to Wolverhampton, was shocked when he travelled to Weston-super-Mare and was greeted with a muddy beach 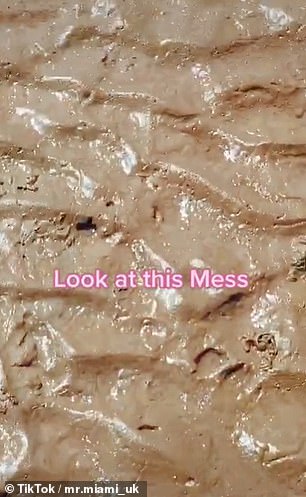 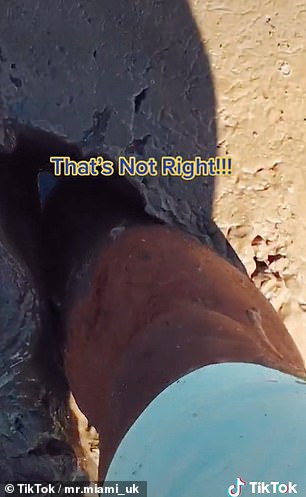 An outraged Nick videoed the mud on the beach, calling it a mess, left, and showed how deep his feet went into it, saying it ruined his Crocs

The videos, one of which is entitled ‘Weston super Mud – Don’t Go There’, went viral, racking up nearly 100,000 views and thousands of likes.

Nick’s mother is from Wolverhampton and moved to Miami, where Nick is from, but he moved back to study International Business Management at Wolverhampton University.

In the video, Nick is seen walking down the beach with the caption ‘is this a beach?’.

He showed how his feet got stuck in the mud as he attempted to walk to the water, in a series of three videos.

Speaking afterwards, Nick said: ‘I thought “where’s the water?” Once I spotted where the water was I thought it was going to be an easy walk to get there.

‘My friend had some family there already and they said you’re not going to make it to the water but I thought they were just being lazy. 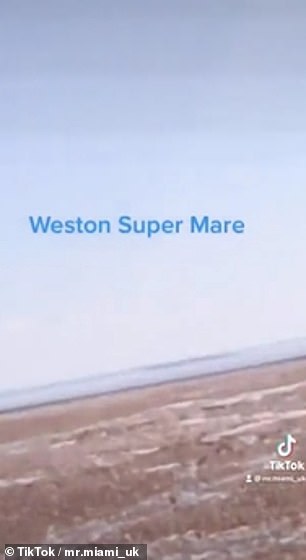 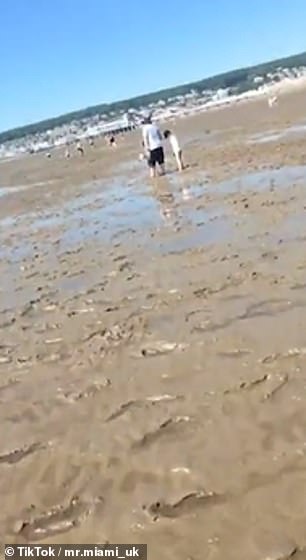 The influencer was shocked by how far the water was from the land, left, and by the muddy sand he had to cross to get there, right 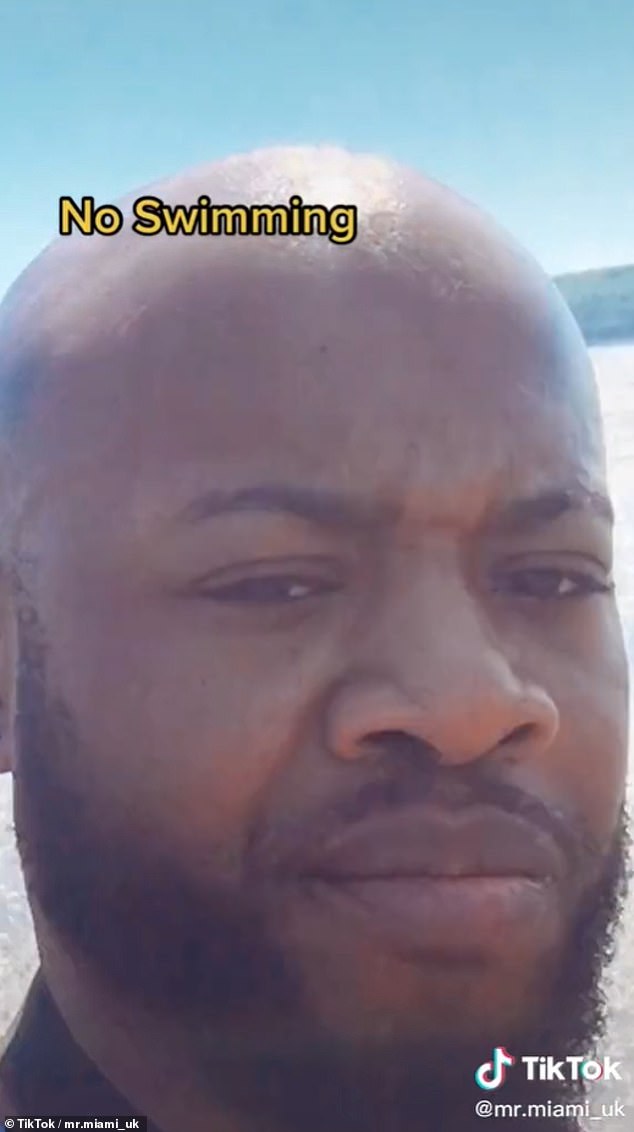 Nick, pictured, was disappointed when he realised he wouldn’t be able to swim on his beach day

‘I didn’t expect the mud was going to come up to my knees – my Crocs got completely obliterated so I had to take them off and had to go in my toes.

‘My feet are smooth though. The mud part was fun but not getting to the water was devastating.’

He said: ‘On the way back one of my friends saw a sign saying “we have quick sinking sand” and we had no idea.

‘When we walked I saw people with kids – I was like, oh my God, people are taking the risk with their children!’

Nick and his TikTok-er friends, Cleopatra Harvey, 24, Alliyah Shearer, 22 and Shanae Williams, 15, were determined to go for a dip in the sea, but when they started their pilgrimage, they realised they weren’t fully prepared.

He said: ‘The people who were at the beach looked like 15 ants because that’s how far away they were. 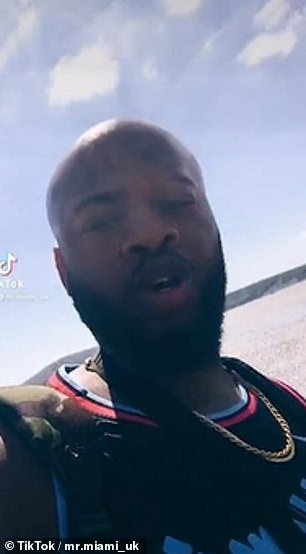 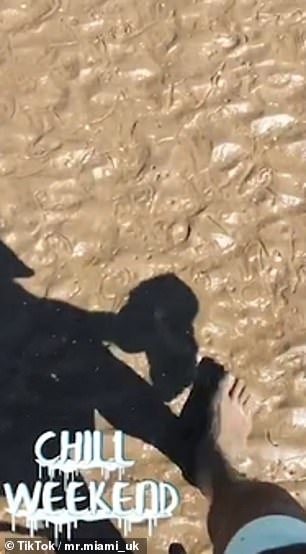 Chef and music manager Nick, who has over 116,000 followers on social media, was also surprised by the presence of sunbathers on a beach where the sea is so far away.

He added: ‘The fact that people actually didn’t go to the beach to go swimming and just to lay in the sun I thought that was crazy, how do you cool off?

‘It’s literally like an oven and you go out there just to bake. I would go back to Weston but I would plan better and I would like for the tide to be in, I want to swim in it, I don’t care how muddy the water is!’

Nick’s UK fans said they would never swim in the water of Weston-super-Mare, but others defended the beach

Nick’s video sparked a reaction both from people who knew Weston-super-Mare, and those who didn’t.

‘I’ve been stuck in it before,’ one said.

‘Weston-Super-Mare is the worst beach in the UK,’ said another.

‘I’m from Bristol; ad I would legit never go in the water at Weston,’ one wrote.

‘It ain’t that bad when the tide comes in,’ said another.