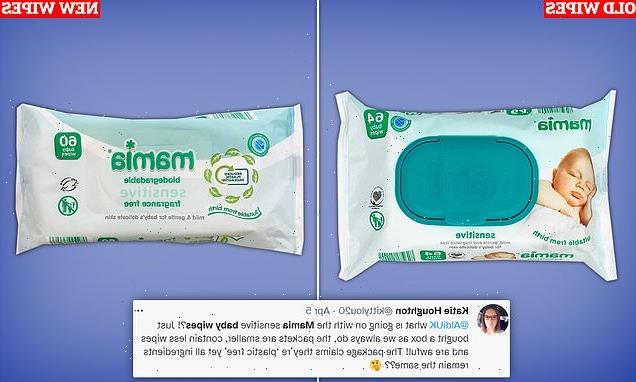 Aldi shoppers are in up in arms after the popular supermarket chain made ‘sneaky’ changes to its best-selling baby wipes.

Some are unhappy with the budget supermarket’s decision to replace its 64 pack of Mamia sensitive baby wipes with new packs of 60.

Outraged shoppers took to Facebook to complain about the quality of the new biodegradable product, which comes in reduced plastic packaging.

Aldi’s new 60 pack of biodegradable Mamia baby wipes cost 55p, whilst the old 64 packs of wipes were 62p, but despite the price difference, shoppers are still unhappy at the reduction in size.

They claim the quality has changed and they need to use more wipes, and thus it works out more expensive. 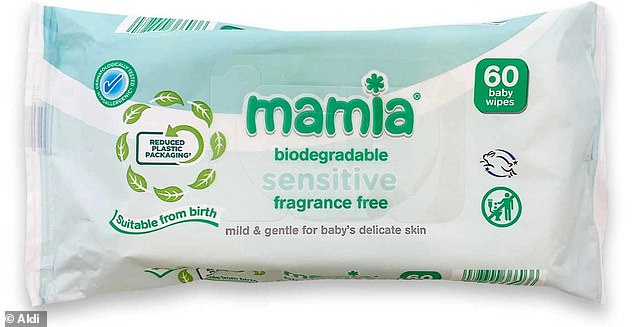 The budget supermarket has said that its product (pictured) is biodegradable. The old pack was found to contain single-use plastic 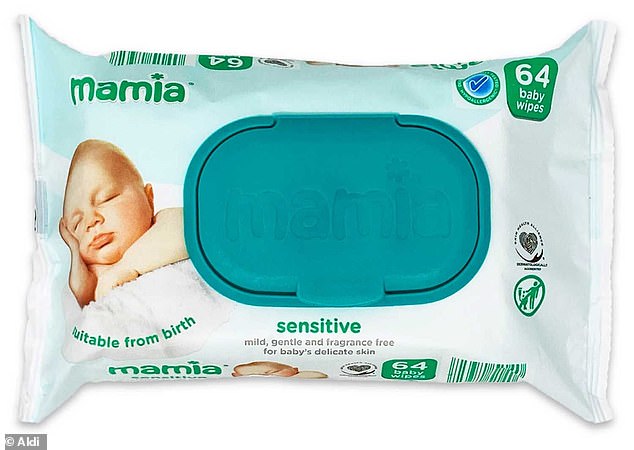 Parents took to Facebook to express their dissatisfaction with the change. One pasted ‘Aldi are getting sneaky! 64 down to 60!!!! Aldi UK sort it out!’

Aldi said it discontinued to old version because the wipes in the 64 pack contained plastic.

The supermarket pledged to remove all single-use plastic from its own-brand wipes by the summer.

Aldi also pointed out the new 60-pack is industry-standard, but the move has not been welcomed by all parents and some have turned to the internet to express their anger at the change of their favourite product.

A discoussion about the discontinued product and its replacement swiftly reached Facebook, with a post on the Extreme Couponing and Bargains group amassing over 4,000 comments. 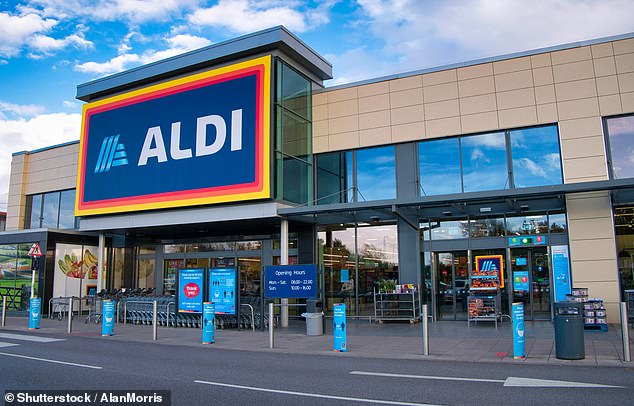 Another slammed the new wipes calling them ‘absolute rubbish’, and a third mirrored this, saying that she had stopped using them because they fall apart when using.

They said: ‘whoever designed these clearly didn’t try clean a dirty bum with them.’

A fourth user said: ‘Not only that but they have gone to pot too!’ and again commented that the quality was ‘awful.’

One user even recommended Morrisons baby wipes as an alternative, branding them ‘absolutely amazing’, while another suggested Poundland.

Customers on the Facebook group said that because the quality of the product had been compromised they were forced to buy more.

With one user revealing: ‘Two packets used to last me a week. Now I go through them in four days – so frustrating as I love Aldi normally.’

FEMAIL contacted Aldi regarding the change in product.

A spokesperson for the budget supermarket said: ‘Moving to biodegradable wipes is another step forward in our commitment to reduce plastic across our ranges.

‘As well as being plastic-free, our Mamia Biodegradable Wipes remain significantly cheaper than the Big Four, and we will continue to do all we can to keep prices down so shoppers know they will always make significant savings when they shop with us’

Some unhappy parents responded on Twitter to Aldi’s decision to discontinue the 64-pack of Mamia baby wipes.

One user posted ‘@AldiUK we’ve been purchasing mamia baby wipes for the last 18 months for our baby daughter and have preferred it over huggies + pampers wipes. Recently you’ve changed the pack size from 64 to 60 (no big deal, inflation and all) but the quality has gone down the drain!’

Another said: ‘Sorry to be a Twitter moaner, @AldiUK, but you changed your baby wipes. Same package, but smaller and different wipes. They’re far inferior and it’s really noticeable. It’s shame as your Mamia stuff was always the best on the market.’

A third commented: ‘@AldiUK what’s happened to the Mamia baby wipes? They’ve gone like huggies. So much better before! Can’t use them.’

And a fourth said: ‘@AldiUK what is going on with the Mamia sensitive baby wipes?! just bought a box as we always do, the packets are smaller, contain less wipes and are awful! The package claims they’re ‘plastic free’ yet all ingredients remain the same??’