While plenty of space enthusiasts have already strolled through the doors to the Powerhouse Museum's Apollo 11, the curator of the exhibition, Dr Sarah Reeves, has also encountered a few visitors who are convinced the moon landing didn't occur.

"We've definitely had some people try to change our minds and question why we've done a whole
exhibition on something that obviously never happened," she says wryly. "You can't keep down a good conspiracy theory." 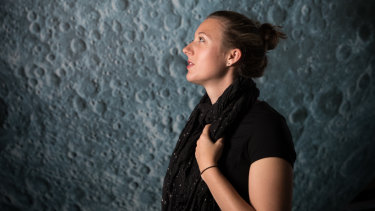 Curator Dr Sarah Reeves with Museum of the Moon, by artist Luke Jerram, in the Apollo 11 exhibition at the Powerhouse Museum, Sydney.Credit:Janie Barrett

All but the most ardent hoax believer would be convinced at Apollo 11 (until January 31) with more than 200 objects related to the landmark 1969 expedition on display including full-sized replica spacecraft, real pieces of rockets, moon rock samples and memorabilia. Also on show is British artist Luke Jerram's seven-metre inflatable installation Museum of the Moon, which uses NASA imagery for a breathtaking and accurate depiction of the lunar surface.

Today's 50th anniversary of astronauts Neil Armstrong and Buzz Aldrin's walk on the moon is being marked with a special day of activities. Dr Reeves, who holds a PhD in astronomy, will lead tours, films about the mission will be screened and younger visitors can build a moon buggy or design a space colony.

Dr Reeves believes the groundbreaking scientific event had a significant lasting impact on the psyche of humankind.

"It changed forever the idea that humans were bound to the earth," she says. "We didn't just orbit another planet, we actually stepped foot on there. That was something that had been dreamed about for probably thousands of years and for that to actually become reality showed what we as humans
are capable of when we put our minds to it."