Happy birthday, Britney Spears! While she’s known across the globe as an unassailable pop princess, Britney Spears is just “mom” to her two teenage sons Sean Preston, born on September 14, 2005, and Jayden James Federline, born on September 12, 2006. The “Toxic” hitmaker became a mom at a young age — barely 24 years old — while under the scrutiny of the public eye, which resulted in some of the most painful chapters in Spears’ life. During those difficult moments, her parenting was often questioned and shamed by the media, and Spears has had a long road to getting the respect she deserves as a mother.

In 2007, Spears lost physical custody of her sons to ex-husband Kevin Federline. By 2008, her visitation rights were suspended, giving Federline sole physical and legal custody of their sons. Within the past decade, however, Spears has worked hard to be an active participant in her sons’ lives, and to fight for them in court. As of 2019, she retains 30% custody of her two boys with Federline, but with her conservatorship coming to an end, the mom-of-two will hopefully be able to spend more time with her sons and come to a more equal arrangement with Federline.

As she gets ready to claim this new lease on life — breaking away from the abuse of her conservatorship and getting engaged to longtime boyfriend Sam Asghari — we are looking back on some of the most touching moments Spears has shared with her teenage sons.

Spears At The Smurfs 2 Movie Premiere with Her Boys 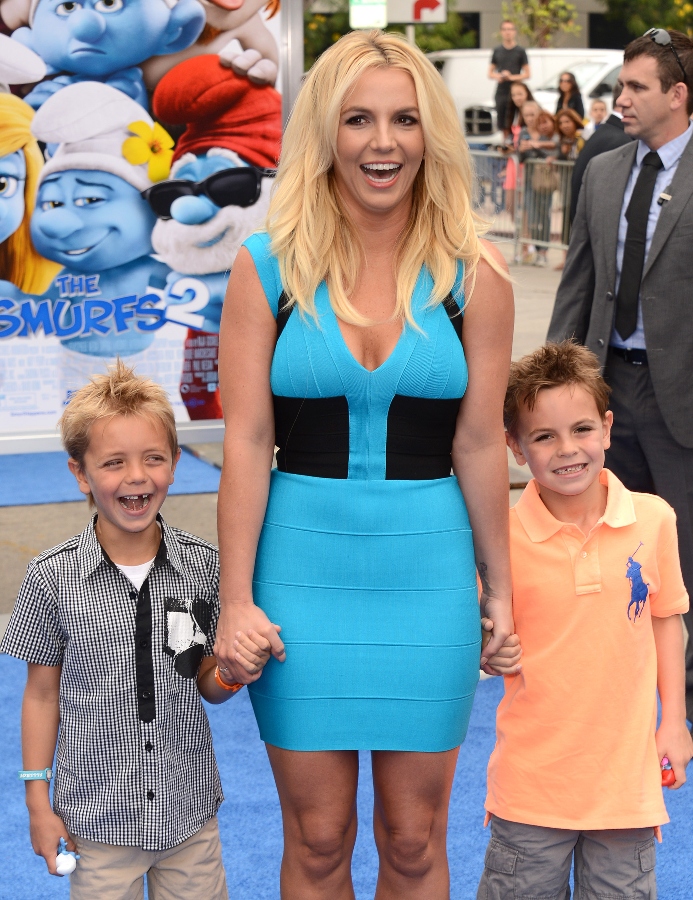 Spears was absolutely beaming on July 28, 2013 when she walked the aptly blue carpet with her two boys for the premiere of The Smurfs 2. Jayden and Sean looked so happy, and Spears held on to each of their hands while they posed for photos. We can see where the boys got their smile from!

In a rare photo with her sons on March 1, 2021, Spears shared two snaps from a hike she went on with her teenage boys. The singer couldn’t believe how big they had gotten — and neither could we! “It’s so crazy how time flies …. My boys are so big now,” Spears wrote. “I haven’t posted pictures of them for some time cause they’re at the age where they want to express their own identities and I totally get it …. But I went out of my way to make this cool edit,” she added.

Spears & Her Sons at Disneyland

During a family trip to Disneyland, Spears shared a sweet photo with her sons in the happiest place on Earth! “Great time at Disneyland today …. but I don’t remember ever getting that wet on splash mountain,” Spears wrote. “Geeez …. anyhow my boys are older now, so they don’t like their picture taken ever… so I was thrilled today when they said SURE !!!!! Such a great place,” she concluded her caption.

Spears Posing By A Tree with Her Boys

Back in November 2018, Spears and her sons got together for a cute little photo op by a tree that the singer absolutely adores. “Every year i come back to this tree. It’s beautiful!” Spears’ caption reads.

Spears Having Dinner with Her Boys

The same night that the mom-of-two and her sons snapped a photo by a tree, Spears also shared photos and a video from their dinner together! “Dinner with my boys at one of our favorite spots,” the caption read. The trio looked so sweet together, too.

In August 2018, Spears shared these precious snaps with her two boys during a trip to London. The trip was undoubtedly amazing for all three, as Spears got some much-needed time with her sons prior to getting back on the stage.

Spears & Her Sons Being Silly

During her “Piece Of Me” tour in 2018, Spears got some down time with her sons — and they got up to some fun. The trio appeared to head to a mall in these photos Spears posted to Instagram. Just look at that selfie snap!

Spears & Her Boys At Their ‘Favorite Spot’

Getting to share a meal together is clearly important to Spears, who posted this sweet moment with her sons in May 2018. “Love when we go to our favorite spot on Sundays,” she began the caption to her post, adding, “The boys are bigger than me now!!!!!”

Spears Playing Outside With Her Sons

With so much access to screens these days, time spent outside having some fun in the sun is so important. Back in May 2018, Spears got her boys to have a blast with her outside by racing, playing tag, and more! “Nothing makes me happier as a mom than watching these boys grow and smile and laugh!! They are my world and I love days like this when we get to just run around and play together,” Spears captioned the post.

Spears & Her Boys at the Pool

Spears kicked off 2018 with a day of fun at the pool. In this January 2018 photo, the singer smiled and cuddled up to her two boys for the sweetest photo! “So much fun at this beautiful place,” she captioned the image.