The art world is only just beginning to address the questions raised by the pandemic, such as: Are in-person art fairs a thing of the past and virtual viewing rooms the future? Will museums maintain no-touch ticketing and auction houses continue global online salesrooms?

One mega-gallerist, David Zwirner, has decided to double down on what he took away from the last year: the need for a click-to-buy marketplace to sell original works of art. As a result, Zwirner has created Platform, a website that debuts Thursday and which each month will offer 100 works presented by about 12 independent galleries around the world with prices ranging from $2,500 to $50,000.

“We learned there is a real place in the art world for e-commerce,” Zwirner said in a recent telephone interview. “There is an audience out there we did not know existed. They don’t go to galleries necessarily and they don’t really go to art fairs. They look at things online.” He noted that the audience was “almost all millennials,” who discover art through Instagram and word of mouth. “The art world has never catered to them,” Zwirner added. “They can graduate into a much broader participant.”

Zwirner presented an earlier pilot of Platform last year, and several of the participating galleries are returning for the new iteration, including Bridget Donahue and Night Gallery. Among the new partners are Bortolami, Charles Moffett, and Jessica Silverman. The artists that Platform is presenting initially include Kenny Rivero, Jane Dickson and Jibade-Khalil Huffman. 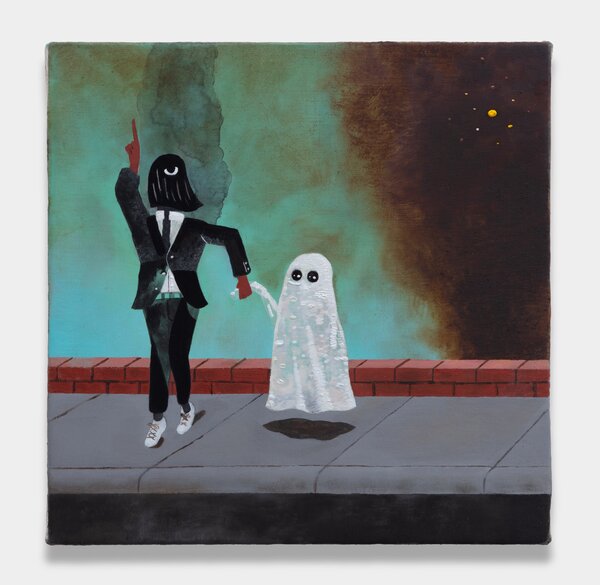 To be sure, websites like Artsy and Artnet have been selling art online for some time. And last year, Sotheby’s started Gallery Network, an online, buy-now marketplace for works valued up to $150,000.

But for a blue-chip behemoth like Zwirner, the Platform venture represents a significant departure from the traditional in-person gallery model. The additional information provided about the works of art is more extensive, and in many cases artists are making work for the site.

“Everybody is trying to figure out this new landscape, which relies so much on digital content and selling material without actually seeing it in person,” Moffett said. “We’ve tried a number of different platforms and have been less than satisfied with the results. Obviously the David Zwirner brand is one that is very well respected and my artists liked the idea that they would be presenting on the Zwirner platform, so we figured, why not give this a shot?”

Skeptics will say that Zwirner is just trying to garner publicity and generate good will with a paternalistic, Robin Hood move that ultimately gives his own gallery 20 percent of every sale on Platform. And some in the art world worry that Platform is merely a farm team for Zwirner — a way to develop emerging artists, woo them from smaller galleries, and harvest information about those galleries’ clientele.

“I wouldn’t be interested in doing something like that — it’s a little bit of a wolf in sheep’s clothing,” said the dealer Larry Gagosian. “My advice to smaller galleries would be preserve your own identity and brand — even if you can’t do it at the level of a large gallery, work within your means and don’t hand over your artists and client lists to somebody who might take advantage of it at some point.”

Zwirner said he is looking to collaborate with smaller galleries, not supplant or exploit them, pointing, for example to the gallery’s recent addition of the Romanian-born sculptor Andra Ursuta, who will continue to show with Ramiken Crucible, and to Harold Ancart, who continues to work with a smaller gallery, Clearing.

Lucas Zwirner, the son of the dealer, who led the creation of Platform, pointed out that the mega-gallery is investing in material on the site that gives the artists greater visibility, including interviews and videos.

Moffett said the click-to-buy aspect was a little unsettling, replacing the “inquire” button, which initiates a conversation with the gallery. “I take a lot of pride in placing all of my artists’ work carefully, and the idea that we’re putting these artists’ work out there in the world for anybody to buy is a little bit stressful,” he said. “If I had a preference, it would be the ‘inquire’ button, but I think taking a leap of faith is worth it.”

Indeed, where dealers typically take great pains to place works of art with prominent museums or reputable collectors, Platform allows anyone but felons to purchase. But that democratization, David Zwirner said — as well as the transparency of posted prices, compared to the usual gallery opacity around what things cost — is integral to the new business.

“We’re not sitting there and saying, ‘You get to buy it and you don’t,’” Zwirner said. “It’s first come, first served.”

David Kusin, an economist in Dallas who tracks the art market, commended Platform’s “use of 21st-century technology” for buying and selling art, and suggested Zwirner could use the venture to collect valuable art price data.

Mike Steib, the chief executive of Artsy, said he welcomed Platform into the arena: “Anything we can do that makes buying art as accessible as buying cars, jewelry or luxury goods is great.”

Platform is staffed by a team of 10 young gallerists — in addition to his son, it includes Zwirner’s daughter, Marlene — who bring different backgrounds to the venture. Bettina Huang, for example, Platform’s general manager, has held leadership roles at e-commerce companies like Fab.com and the Amazon subsidiary Quidsi.

Silverman, who just opened a new space in San Francisco, said the two artists she will feature are Clare Rojas and Catherine Wagner. “I’m interested in experiments,” the dealer said of Platform — “who might come to the work who we don’t know.”

James Fuentes, a Manhattan gallerist who participated in a pilot of Platform during the pandemic, said that the experience proved to be “a huge boost for us in a very difficult time,” and that the online space is “less hierarchical.”

Several artists on Platform said they were excited about the possibility of greater exposure. “Even a year ago it would have been unimaginable for a dealer like Zwirner to invite an artist like me to participate in this,” said Lily Stockman, who shows with Moffett.

Tunji Adeniyi-Jones, who shows with the Nicelle Beauchene Gallery, said Platform enabled someone like himself, recently out of art school, to have access to Zwirner’s network “without having to meet any of the rigorous intense expectations of a gallery of that caliber.”

While 72 percent of Platform’s first round of artworks are $10,000 and under, Zwirner said he expected the price point to increase. His gallery last June sold Jeff Koons’s “Balloon Venus Lespugue (Red) (2013-19)” for $8 million, and in the last 12 months has sold over $100 million worth of art online.

What particularly fueled the dealer’s interest in the venture, he said, was his experience with the gallery’s fund-raiser, “Artists for Biden,” in which more than $2.5 million worth of art by Koons, Kehinde Wiley and Carmen Herrera, among others, sold through a “buy now” option.

He added that 40 Koons prints of an inflatable American flag, priced at $10,000 each, sold out in seven minutes.

“Those are new kinds of numbers for a gallery,” said Lucas Zwirner, who added that “over 90 percent of buyers were new to the gallery.”

The venture is meant to cultivate a new breed of art buyer, one who may feel more comfortable making a decision for themselves, with less interest in the hand holding that dealers often provide.

“I don’t have time to go to every young emerging gallery,” said Dorian Grinspan, a New York City collector. “It’s exciting to have a place where you have a more curated showing of what’s around the market.”

(While the smaller galleries propose the artworks for Platform, the Zwirner specialists may weigh in.)

The mechanics of the site have been their own challenge. Zwirner Gallery is partnering with the fine-art shipping company Dietl International, using a custom-built system that provides shipping quotes at checkout.

The customer covers shipping costs and galleries get paid when the work ships, avoiding the invoices, packing and transport bills that can be a burden.

David Zwirner said he has spent “hundreds of thousands of dollars” making sure the website is high quality, efficacious and handsome. His commitment to the new online venture inevitably raises questions about his plan for a new $50 million gallery in Chelsea, which has been delayed by the pandemic.

“It creates a golden opportunity for me to think about what I really want,” he said. “I’m no longer as sure as I was four years ago.”

Zwirner said he also likes the idea of a business like Platform saving his gallery — and the smaller ones collaborating with him — the steep costs of multiple art fairs every year.

“We will never go back to the old way of working,” the dealer said. “We’ve encountered a much larger art world than we thought existed. If it proves to be a robust primary market, the sky’s the limit.”