Zooey Deschanel and Jonathan Scott‘s “regular date night” shows they’re living an IRL Disney fairytale movie, and we love that for them!

You guessed it: the two adorable lovebirds went to the Venice Film Festival, looking so in love and so stylish! In the first photo, we see Deschanel applying red-tinted lip liner to her lips, while rocking a dark smokey eye look, and we get a sneak peek at her show-stopping blue gown!

In the next photo, we see Deschanel and Scott hand-in-hand as they make their way to the festival, with Deschanel in a breathtaking blue silk gown from Dolce & Gabbana and Scott in a dashing black suit. We get another snapshot of Deschanel and her dress, seeing the jewel-encrusted details throughout the bodice and sparkling jewelry throughout.

We also get another snapshot of the two looking so hot together in their designer ensembles, giving their best smolder to the camera, followed by another glowing snapshot of Deschanel rocking her gown!

First off, this pair looks so groegous and definitely stole the show at the Venice Film Festival premiere of Deschanel’s latest movie Dreamin’ Wild, where she plays a drummer and the wife to Donnie, who’s played by Casey Affleck. We wish “regular date nights” were as lavish as this!

Scott and Deschanel met back in Aug. 2019 after filming an episode of Carpool Karaoke: The Series and started dating the following year in 2020.

Before you go, click here to see all of the stars at the 2022 Venice Film Festival! 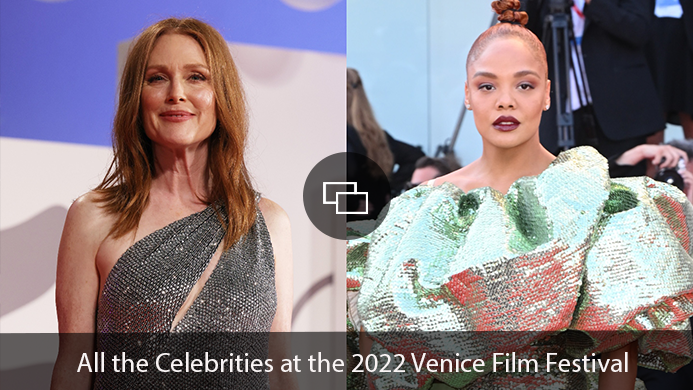